My happy bird is an early riser. It started singing at 4.30 this morning. The sound was coming from the same direction as last night. I wonder if it gets enough sleep. It did not get dark till sometime after 9.39 pm when I felt sleep.

We were camped at 8,000 feet. Patches of remnant snow were dotted around us. It didn’t take long after leaving our campsite to hit significant snow cover over the trail. We made very slow progress postholing continually. We knew it would end as soon as we lost some elevation. But first we had climb another couple of hundred feet before commencing the descent.

We followed some old footprints through the snow which helped with navigation for a little while. These soon disappeared and I had to keep stopping to navigate. It was slow going. The first two miles took us 2 hours. Forget keeping dry feet. We put neoprene booties on as soon as we realised that this section had far more snow then at similar elevation yesterday. 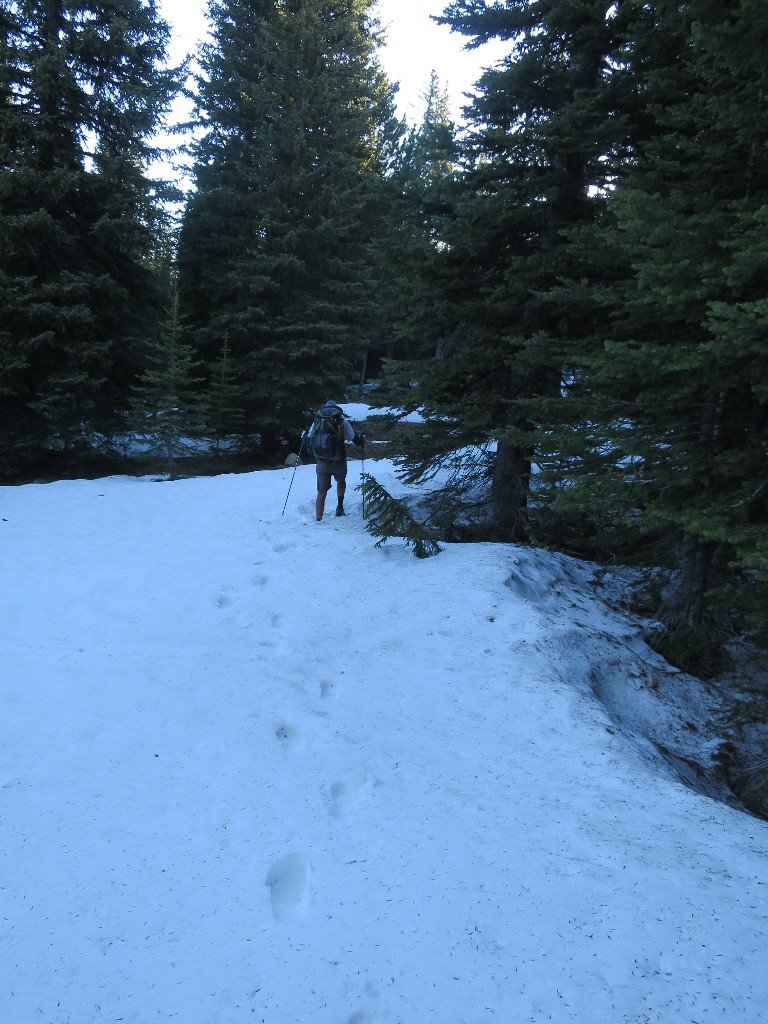 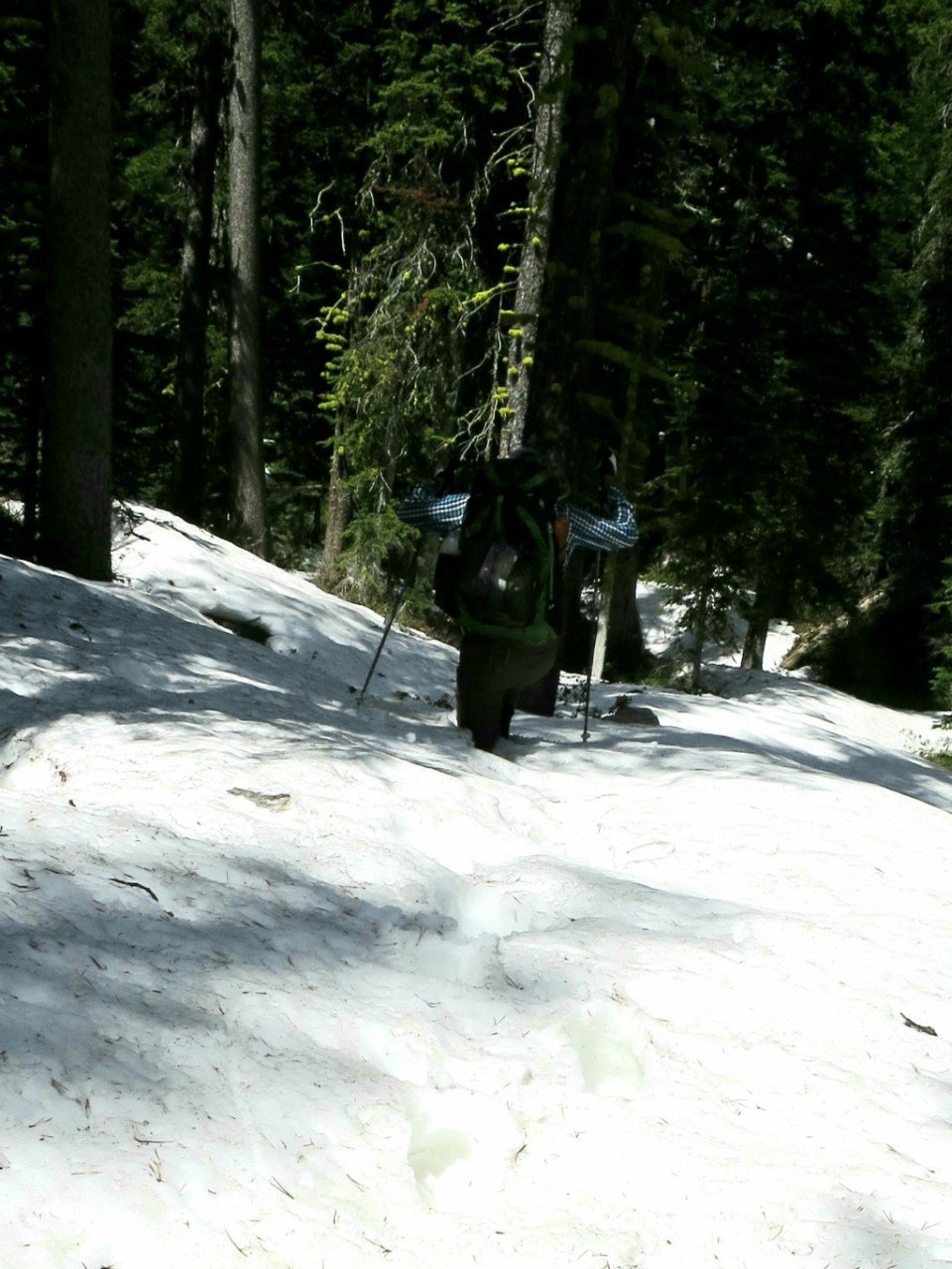 I looked at the map and saw that we are likely to be on snow for some time. We still had 3 more mountains to go up and over. They were all over 8000 feet. Thunderbolt Mountain was the tallest at 8,400 feet.

The second climb was not so bad as it had a southeast aspect on the climb. The snow was still held in the forest but the meadows we traversed were beautiful in full spring bloom. 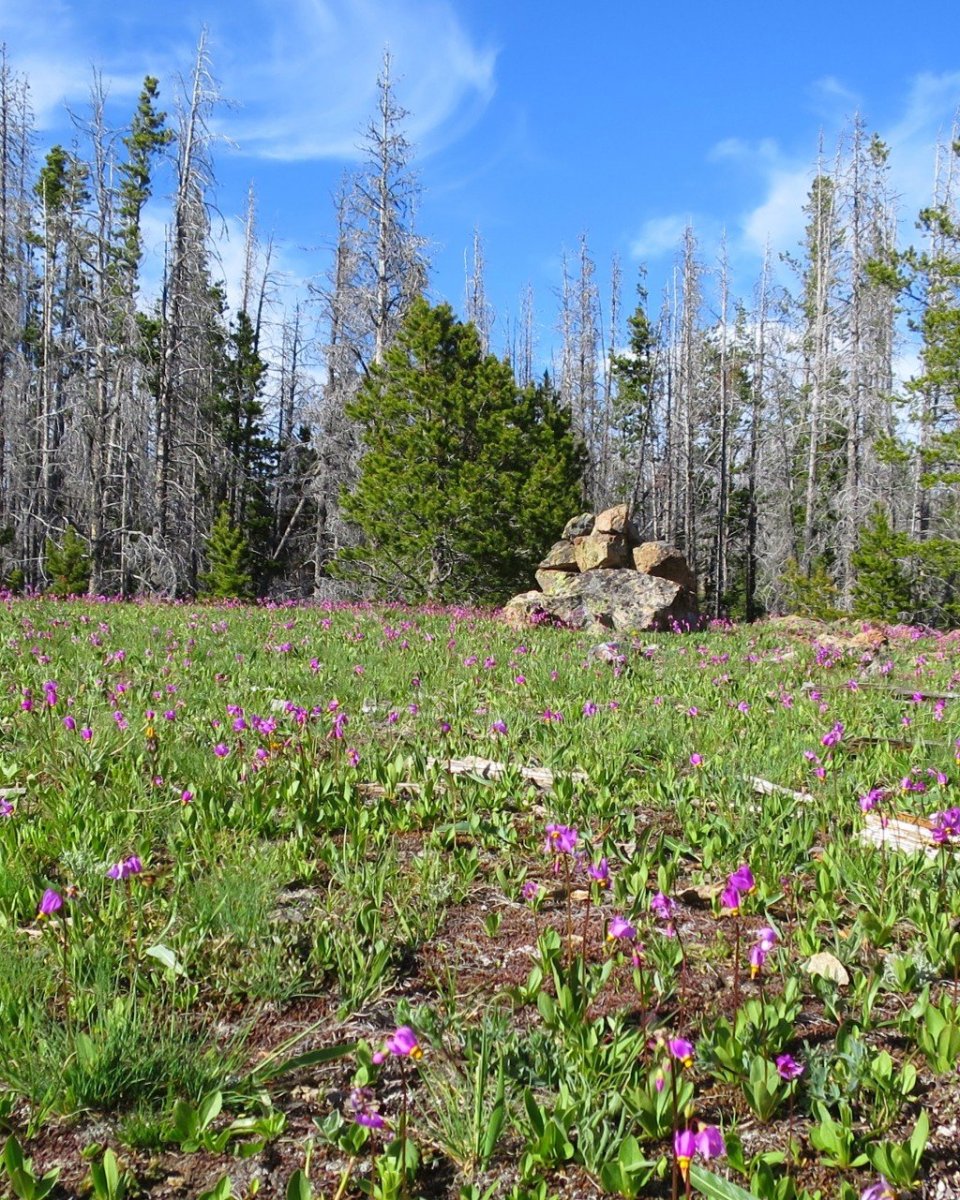 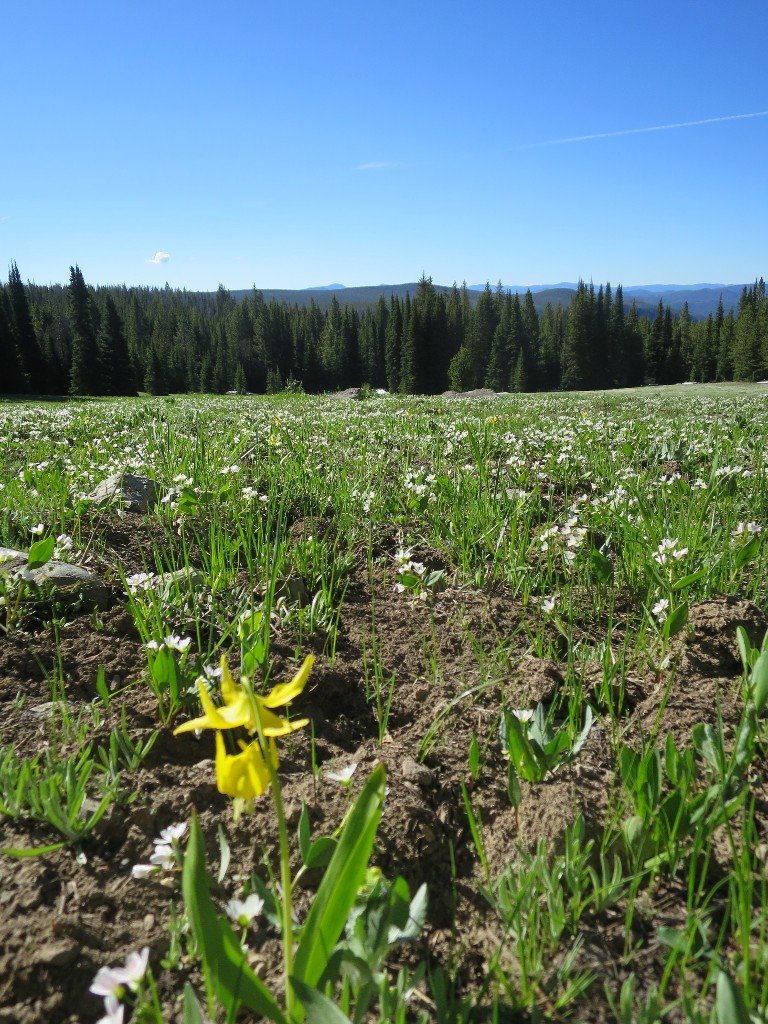 As frustrating and slow as postholing through snow is, it was not that bad today. The sun was shining and it was a particularly warm day. Top temperature reached 70°F (25°C). The snow will be gone soon. Just not soon enough for us. Coming out of the forested section and into sunshine and freshly thawed spring flower cover meadows was enough to re-energise us to keep moving. 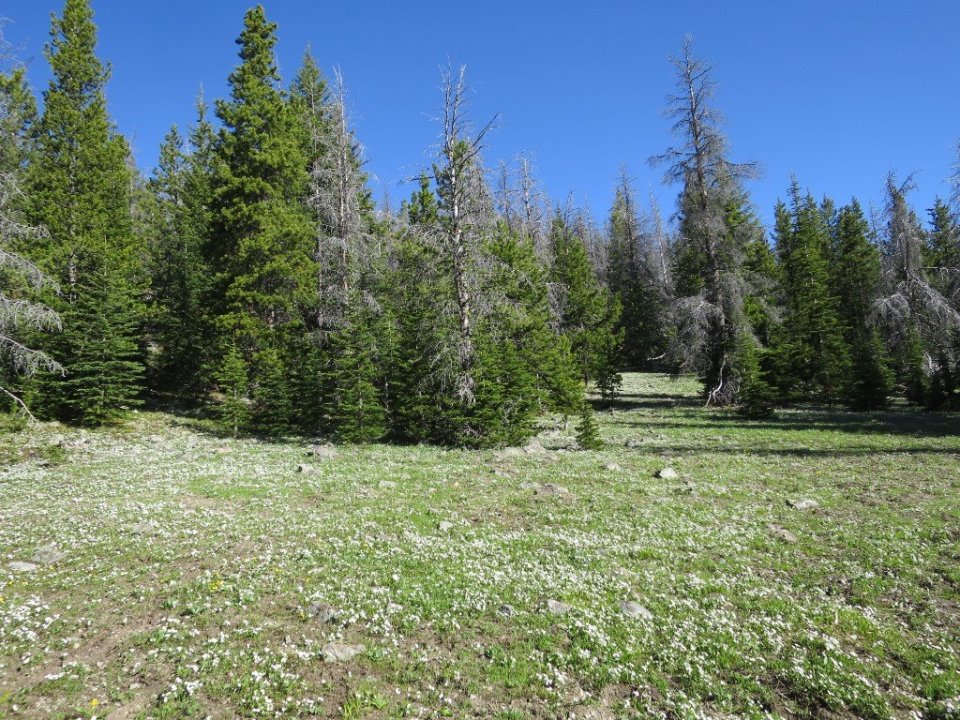 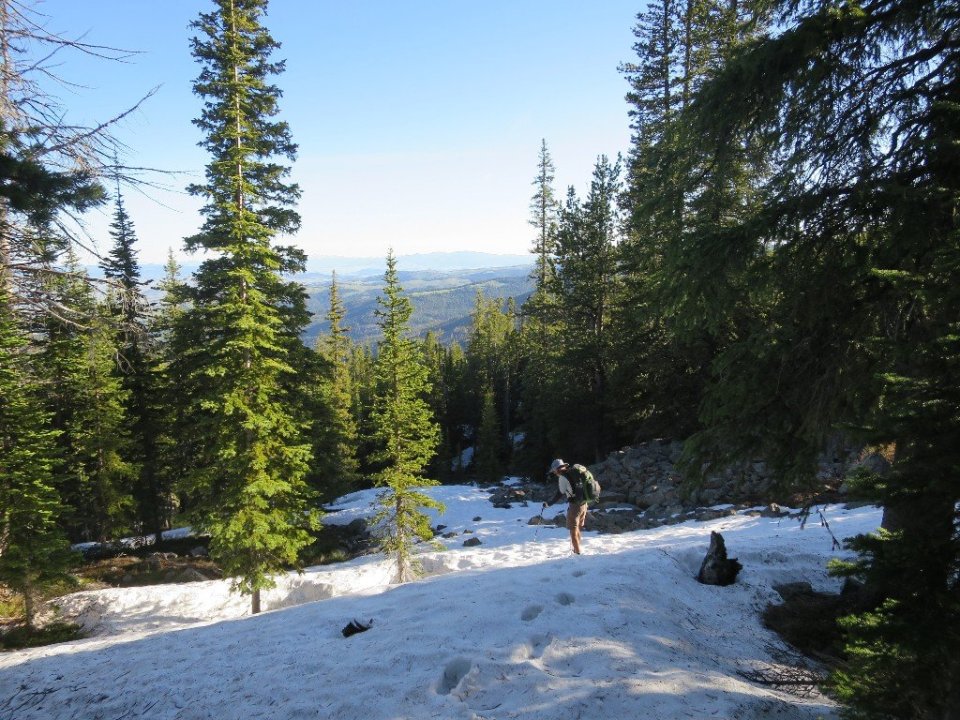 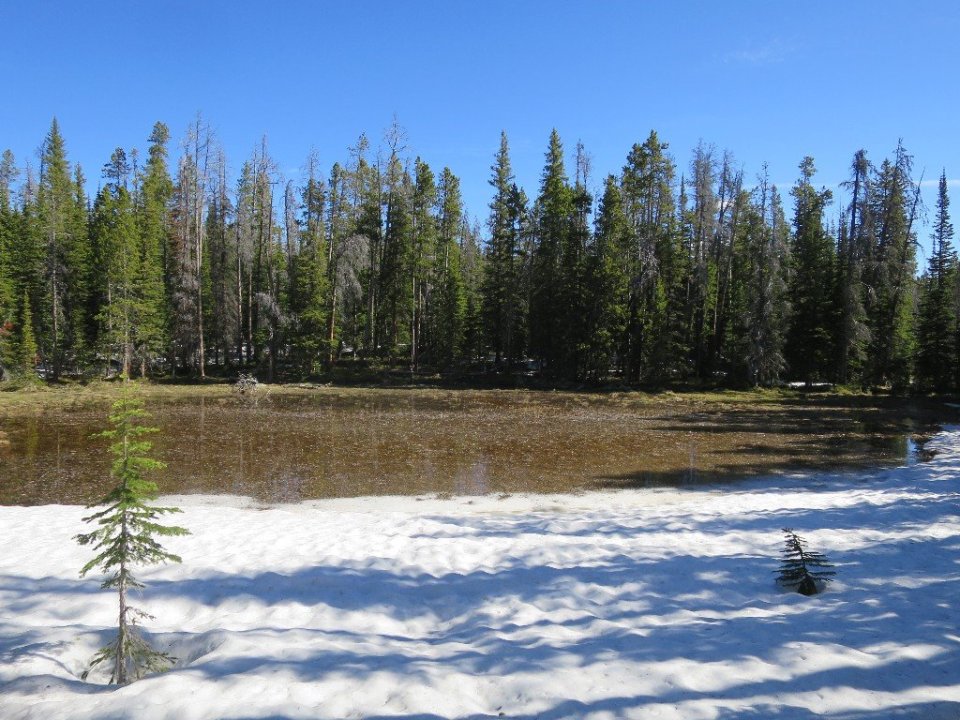 We stopped for lunch by a snow melt creek as soon as we were out of the snow on the second descent. It was nice to take off wet socks and dry out a bit.

The climb up Thunderbold Mountain was snow free but the descent was on a north slope and held quite a bit of snow. We stopped at the mountain overlook before commencing the descent. Exposed volcanic rocks made for a dramatic stop close to the edge. The whole mountain looks like it was recently formed from a volcanic eruption.

It was getting late in the day and I realised that we had not covered anywhere near the mileage for the effort expanded. I think we averaged 1.5 miles and hour. Hammer felt fine towards the end of the day and was keen to hike a little bit longer. I was feeling shattered and could not wait to get off my pickled feet. Hope there is no more snow as we want to make it to Helena tomorrow.