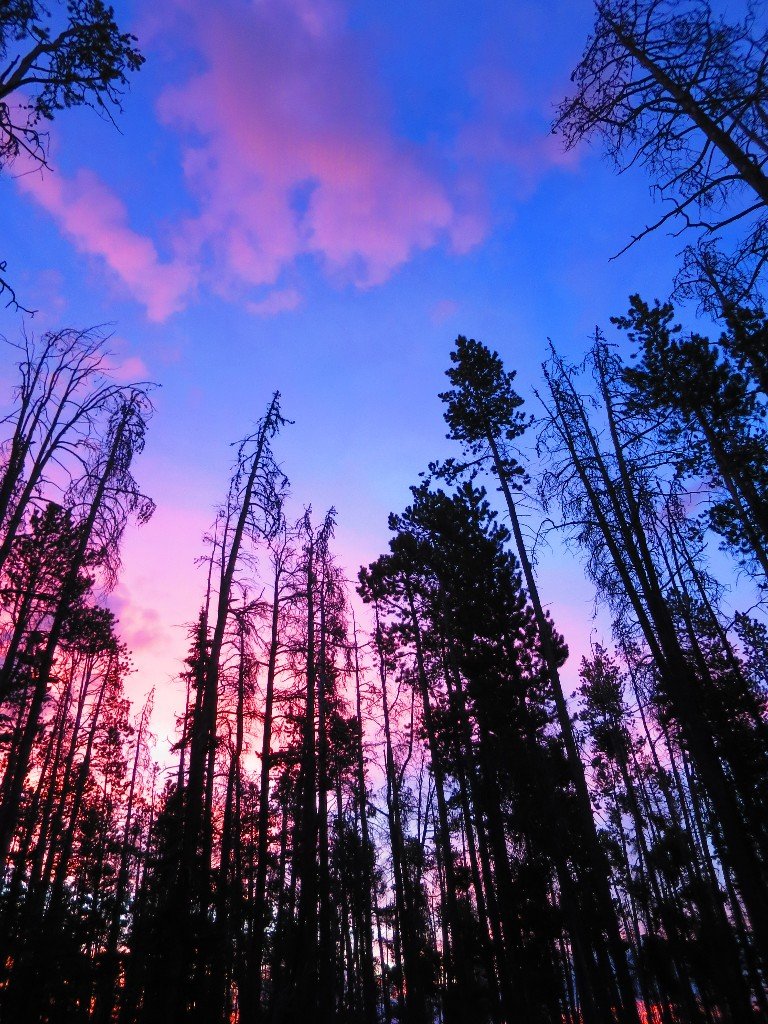 We dodged a thunderstorm last night. Just after sunset at 9.30pm, thunder and lightening could be heard in the distance. Hammer got up to check that the tent was ready for a storm. It was a relief that the storm did not get any closer to us.

We started the day the same way it ended yesterday, walking through a small corridor cut into a forest of pine saplings. It was overcast with very mild temperature and it was eariely silent.

Overall though, it was a pleasant walk through forest with some dieback and lots of blowdowns, which thankfully were cleared off the trail. Our navigation app has some weird distance errors in this section around Bison Mountain. It was underestimating distances by significant amounts. We knew this because there was a map of this possibly new section of trail, about 2 miles in. At the highest point we hiked in the morning we stopped for breakfast on the shingle strewn mountain side. The material looked a lot like the shingles in the Goat Rocks Wilderness in Washington.

The descent off Bison Mountain was via a few switch backs. It was a very steep mountainside, I’m glad there was no snow. The swithchbacks here were the best constructed couple of miles of trail on the CDT yet.

Once we came off the mountain we hiked along a good quality forestry service road. It was quite pleasant, the sun was shining, it was warm and the road was high and offered distant views at times. It was especially dispiriting to find that due to an error in our navigation app, we have around 5 miles longer to get to our destination. On the long descent on the fire road we resorted to listening to a podcast to stay on pace and stay motivated. I generally don’t like disconnecting from my surroundings in this way. 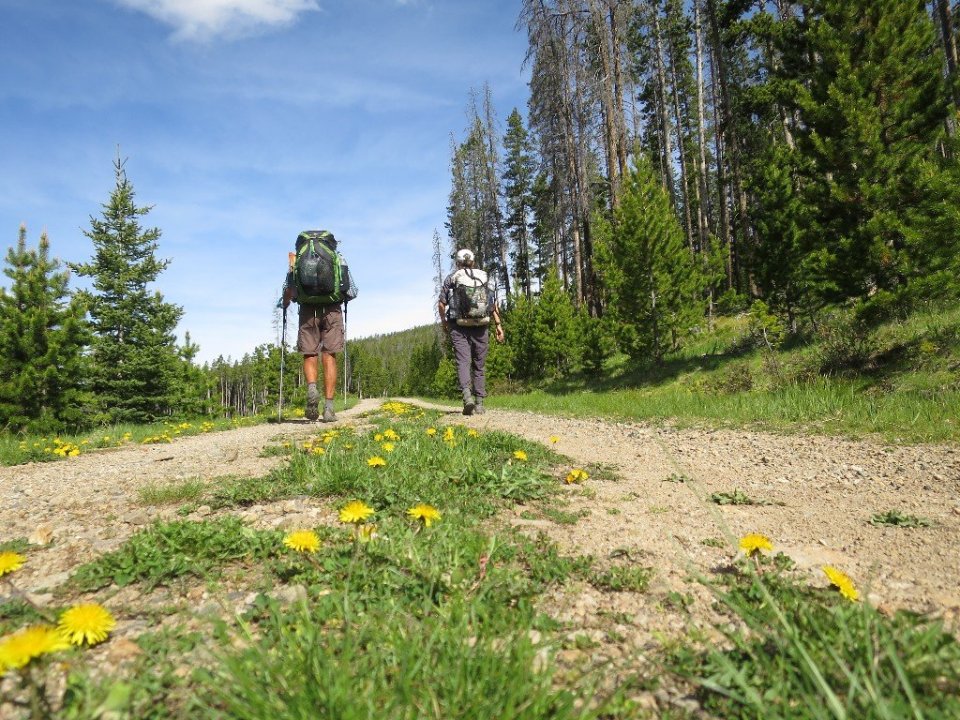 A lunch stop is always a welcomed reset to the day. And today it was especially so. A break was good to refocus. We decided to try and make it to Helena today, rather then camp and have a full day in town tomorrow. Our next resupply is for a relatively short 68 mile leg to Lincoln so we don’t need a lot of time in town.

The afternoon hiking was largely on forestry services roads connected via steep sections of jeep tracks. The jeep tracks sometimes crossed open meadows covered in spring flowers. I stopped in one of these meadows as I had phone service, Hammer hiked on. I soon realised I was standing near a pile of fresh bear scats. I switched the phone off and ran to catch up to Hammer. News from home will have to wait.

It was such a relief to make it to Highway 12, just before 6pm. It took almost half an hour to hitch a ride into Helena, about 16 miles away. A local Sean and his dog Nelson, picked us up. Sean is originally from Bend, Oregon and on the way into town we learnt that Sean was a brewer at the local Lewis and Clark Brewery. And just by coincidence that was the brewery Hammer and I had planned to visit if we had enough time in town. In an act of further generosity Sean drove to the brewery before dropping us off at the motel. He gifted us a 6-pack of the Lewis and Clark Prickly Pear Pale Ale. It was a surprisingly warm evening in Helena and a having a cold beer in a hotel room as soon as we arrived was a special treat and way beyond any expectations. We hope to be able to somehow pay forward such incredible generosity.

By the time we finished shopping for resupply, doing laundry, updating the blog and catching up with news from home it was almost midnight. It will be a late start to get back on trail tomorrow. 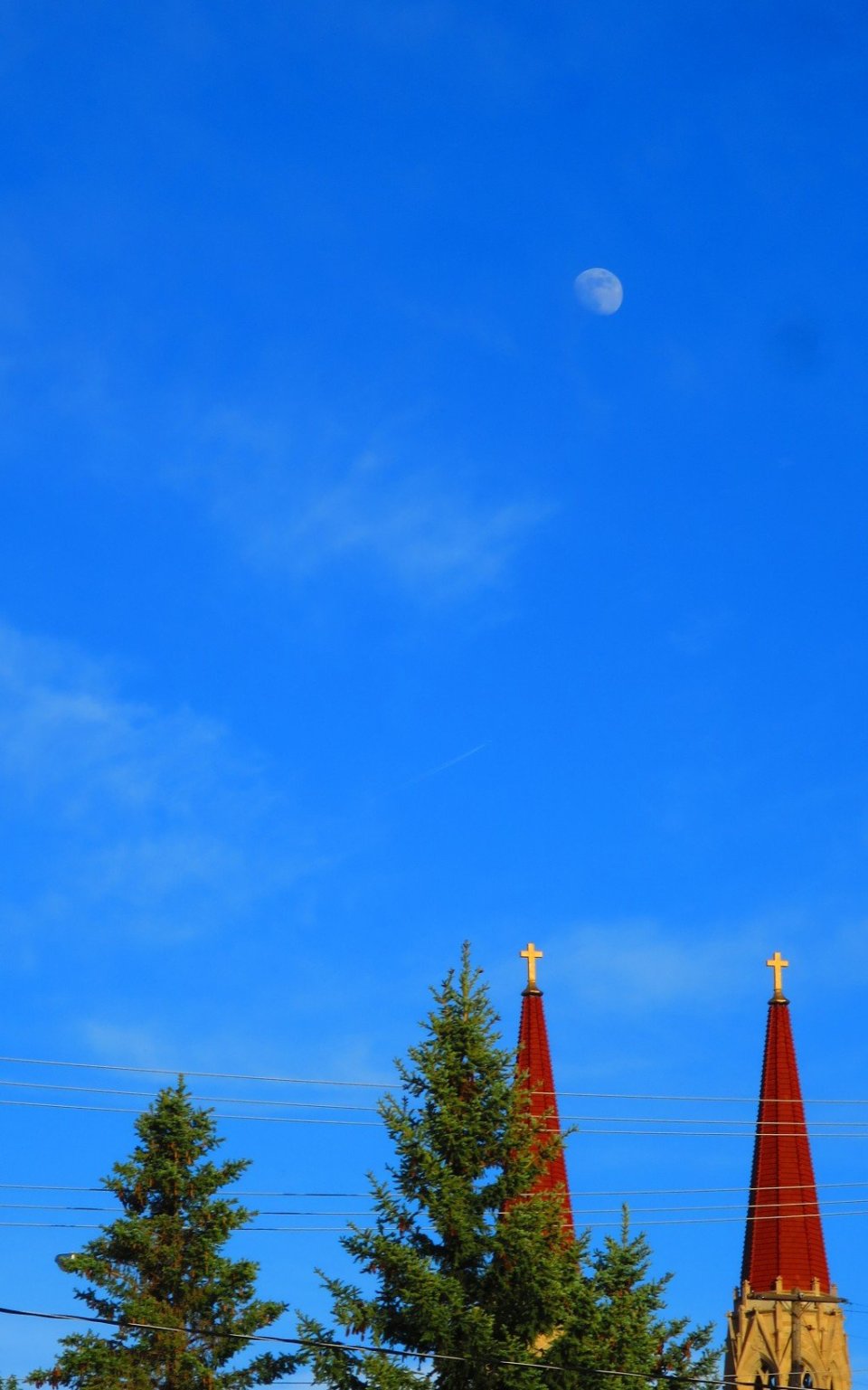