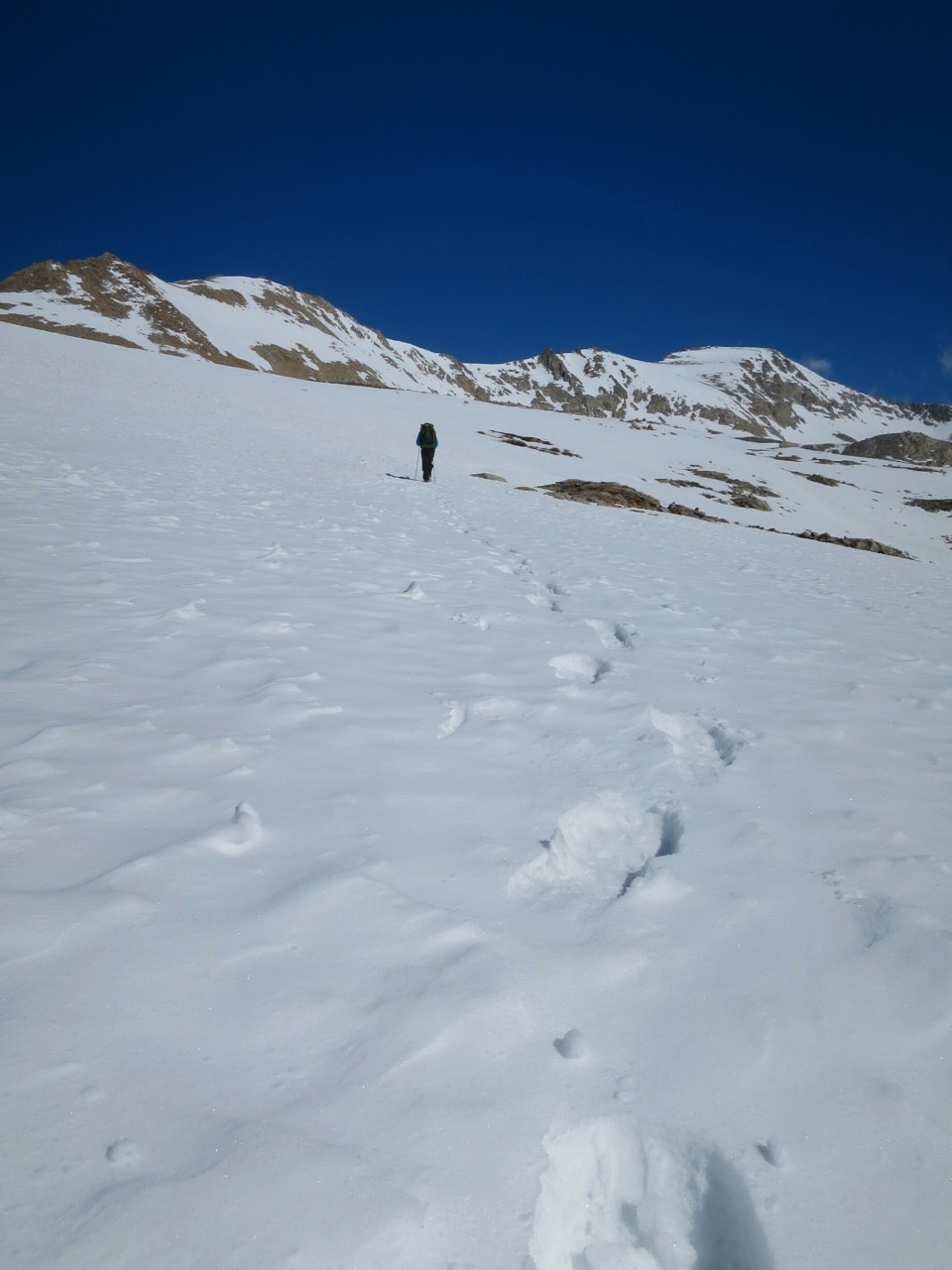 Last night we discussed our options for going over Forester Pass. My preference was to go only if we had sunny skies and/or we had someone else to go over the Pass with. As we had not seen anyone for 2 days chances of finding someone else  were pretty slim. No other hikers came by last night so we are on our own and that is OK.  Hammer was just keen to go even if we had conditions like yesterday. I never thought of him as impulsive but this option seemed a bit rashort and did not appeal  to me at all.
This morning Hammer woke up like an excited boy at Christmas. When he looked outside the tent he let out a loud Yippee! !! Not a cloud in the sky, superb conditions. 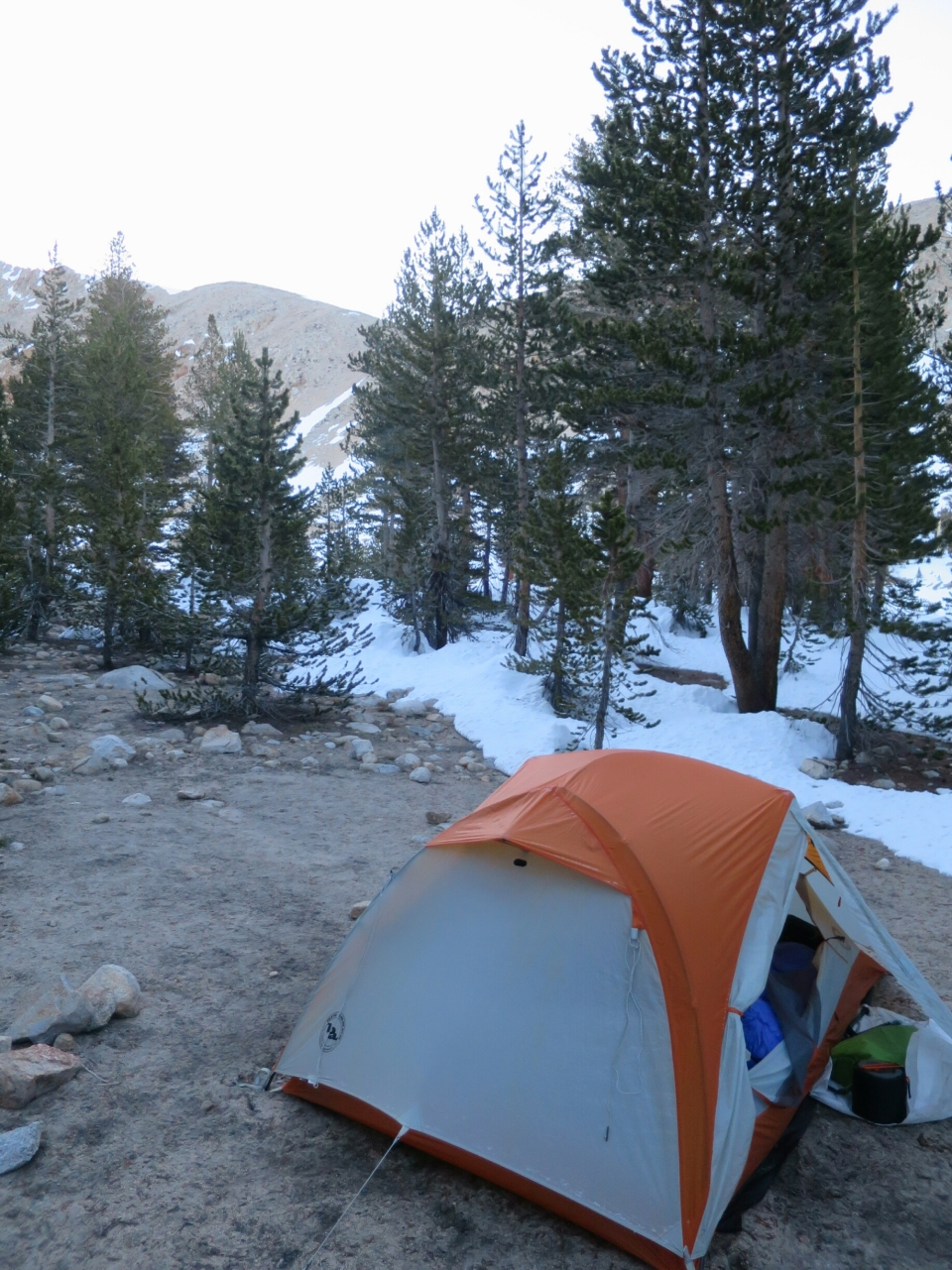 Our shoes were were wet from yesterdays snow and this morning they were frozen. While filtering water from a nearby stream,  the water froze in the plastic tube. So it was a chilly cold morning.  We finished breaking camp just as the sun came over the hill and hit the trail.
We got going with some trepidation on my part. Within the first half mile we had to get our defrosted shoes off and cross another waterway,  Tyndall Creek. 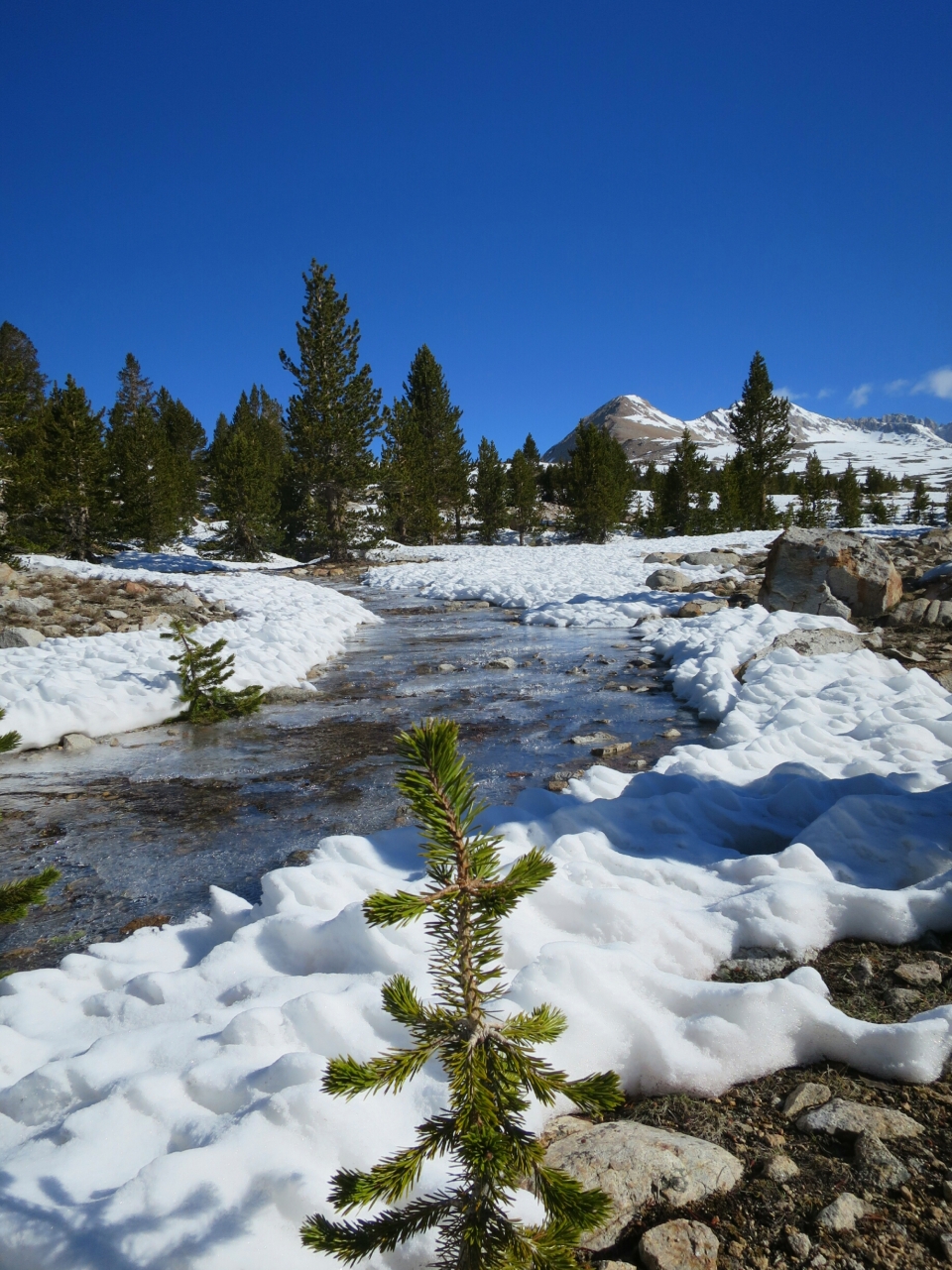 This creek looked a bit faster so we took a bit of time to find a good spot to cross. The anticipation of getting already cold feet into freezing water is actually worse  then actually just getting in and getting it over with. Feet felt like lumps of lead after the crossing but putting them back into wet shoes felt surprisingly warm by contrast.
The trail was completely covered in snow so we relied on old footprints in the snow for our navigation. These were somewhat covered up by yesterday’s snowfall. We estimated about 4-5 inches of snow fell in the afternoon and overnight.
As we neared the approach to the steepest part of the ascent over Forester, we looked back to see another hiker approaching fast. Great I thought, we will not be alone in going over the pass. Such a relief to see another person. We waited for him to catch up, his name was Nightcap. He thought we were friends of his so he hurried to catch us. On realising we were not his hiking buddies he decided to stop and rest before the climb. And also to dry his socks and shoes from the Tyndall Creek crossing. So we were on our own after all. 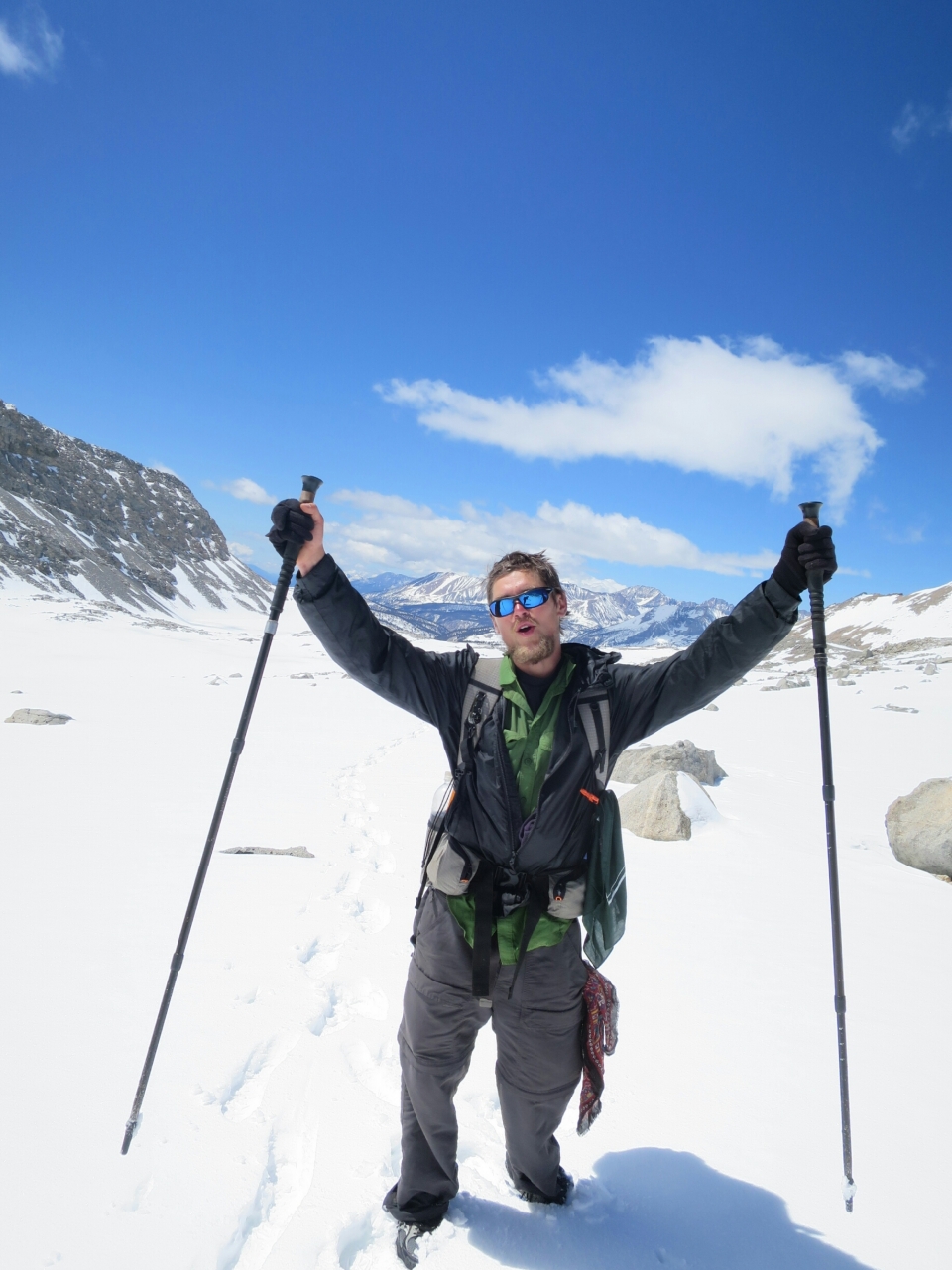 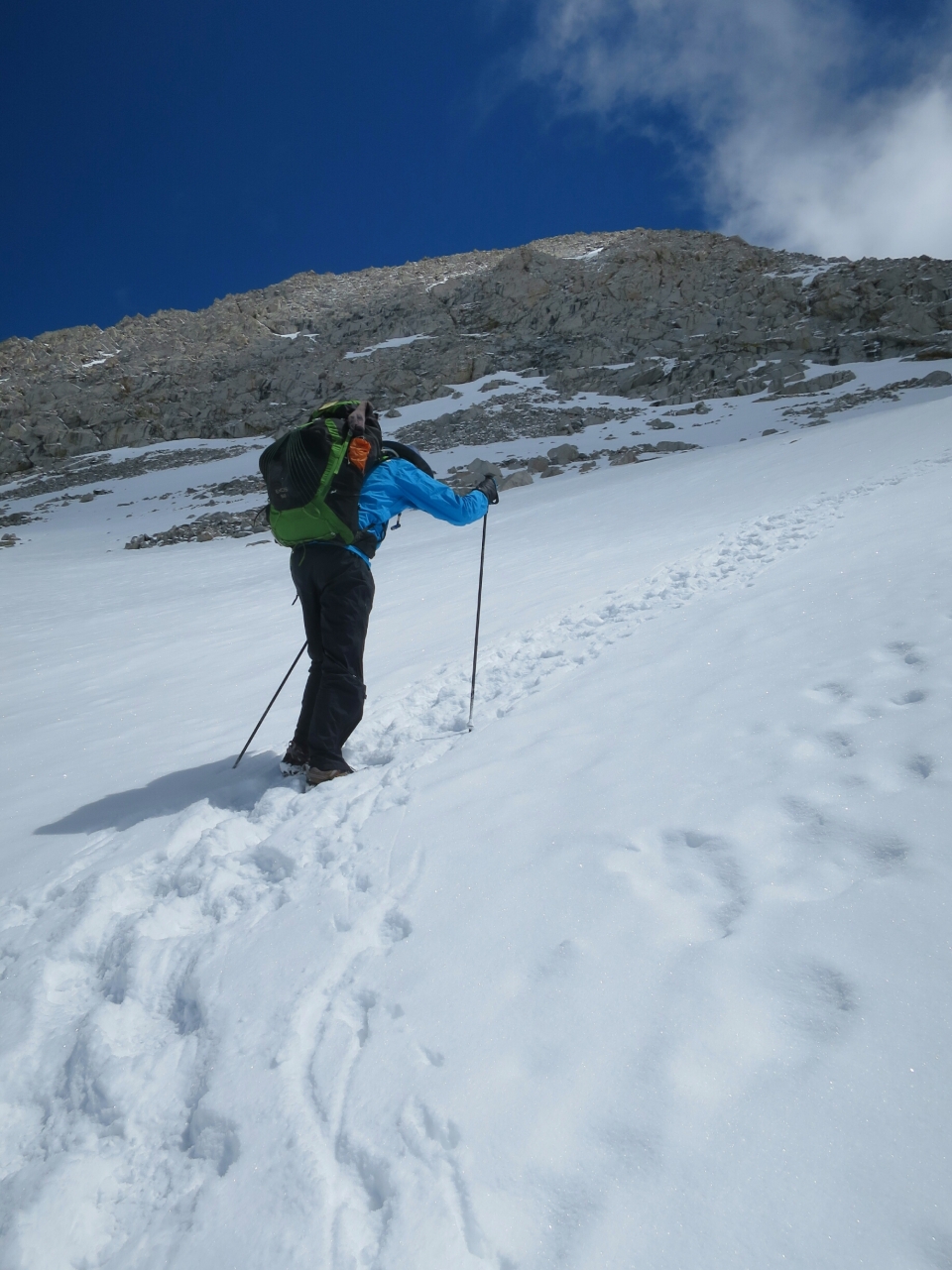 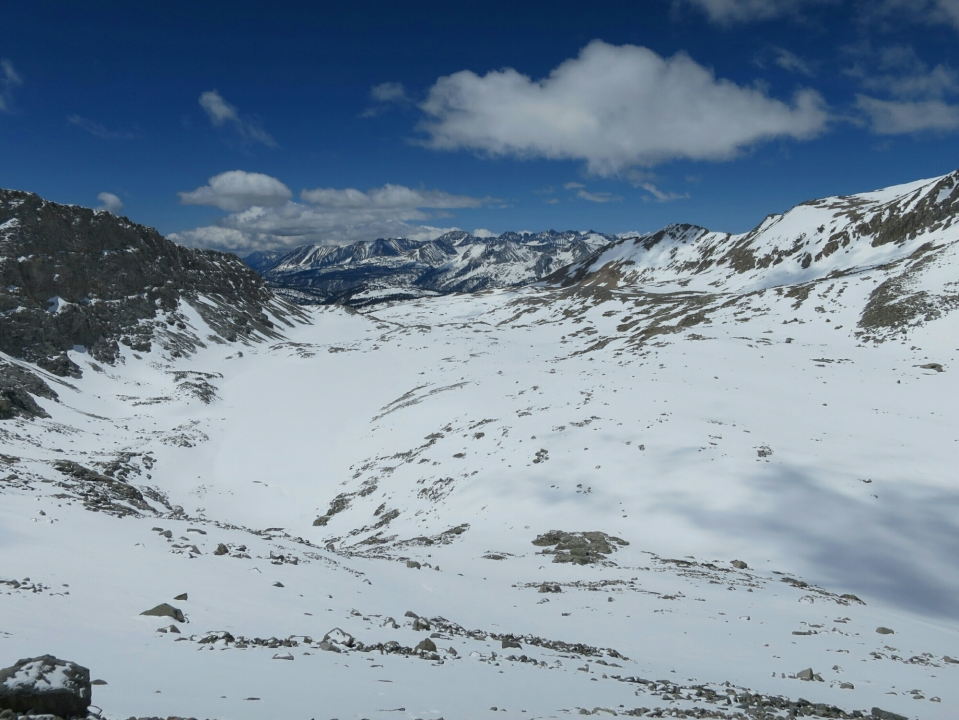 We got our microspikes on. They look like snow chains for your shoes. And with Hammer in the lead we followed what looked like fresh footsteps in the snow. They must have camped closer to the start of the ascent and went over earlier this morning. The steepest part of the climb was very slow going. I was fighting nausea and stopping frequently to catch my breath. I felt very uncomfortable. The slope had about a foot of firmly packed snow with what looked like blue ice underneath. It was sheer hard work. We got to what should have been a left switchback only to see that the footprints led to a huge rocky boulder field and then descended back around it. Oops… wrong pass, so back down we had to go and then start to climb the right Pass. It was very frustrating for both of us, and I am sure the person who made the tracks. We probably lost an hour plus a lot of energy on this mistake. 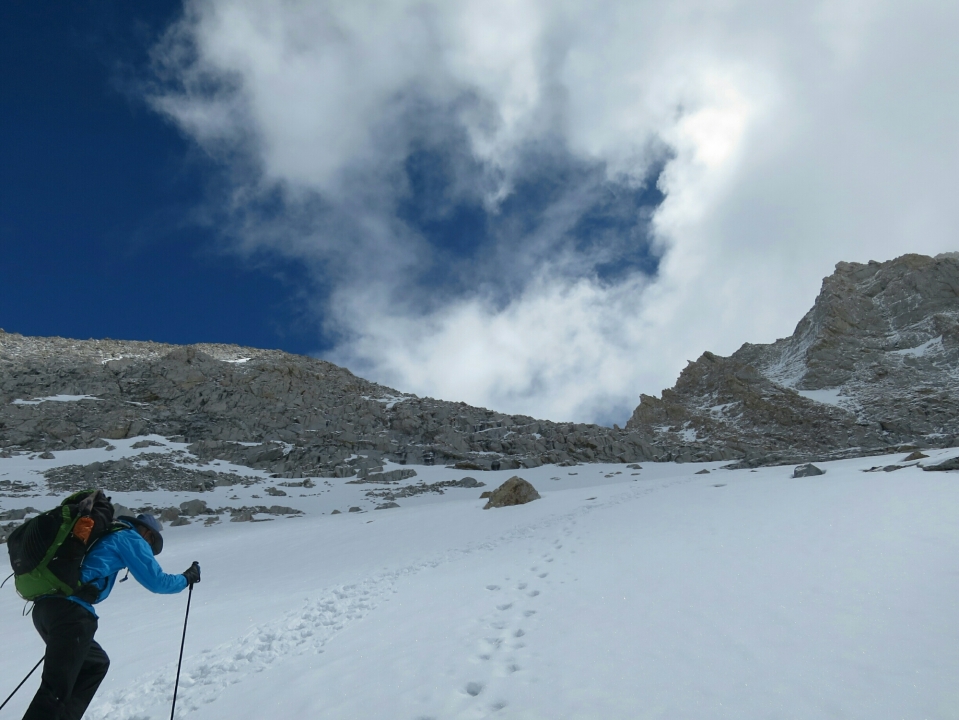 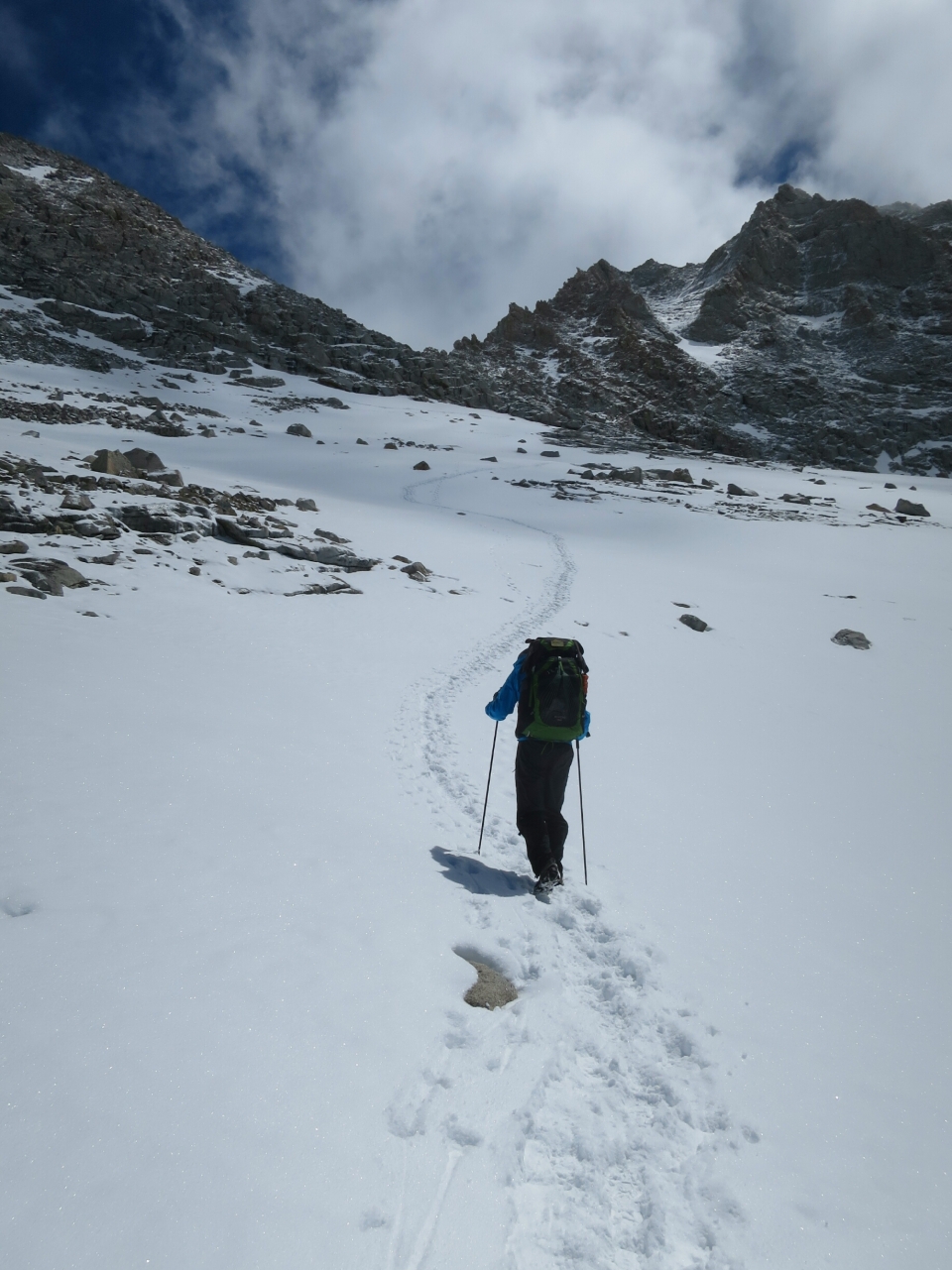 Anyhow back on track to the summit we ascended until we could see a section of trail free of snow. This snow free section did not last long and we still had to traverse probably the most dangerous section on the Pass, the Shute. 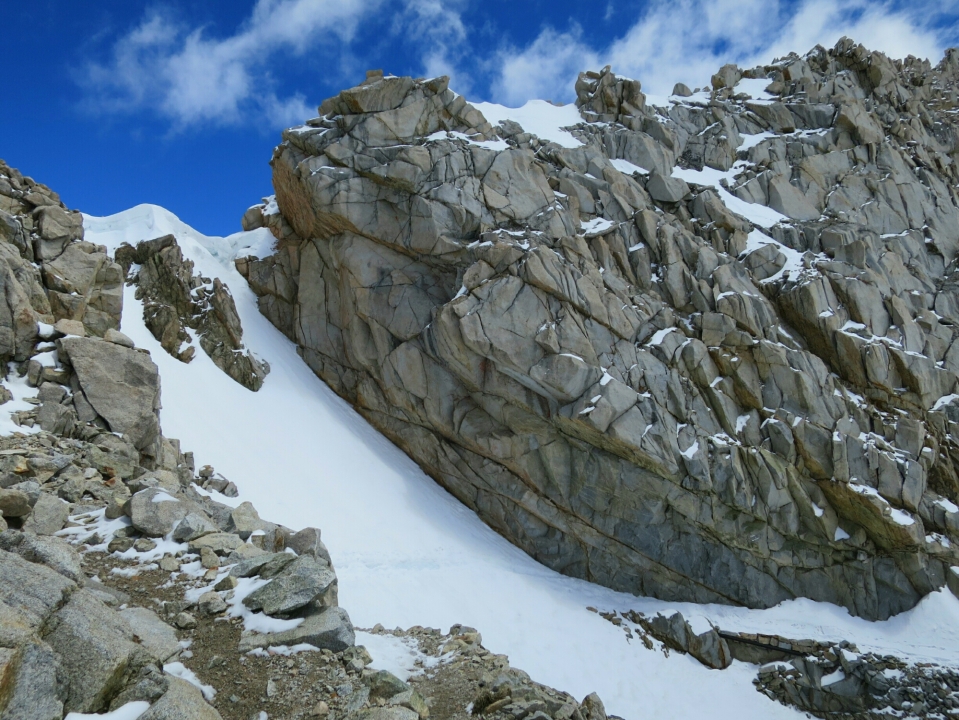 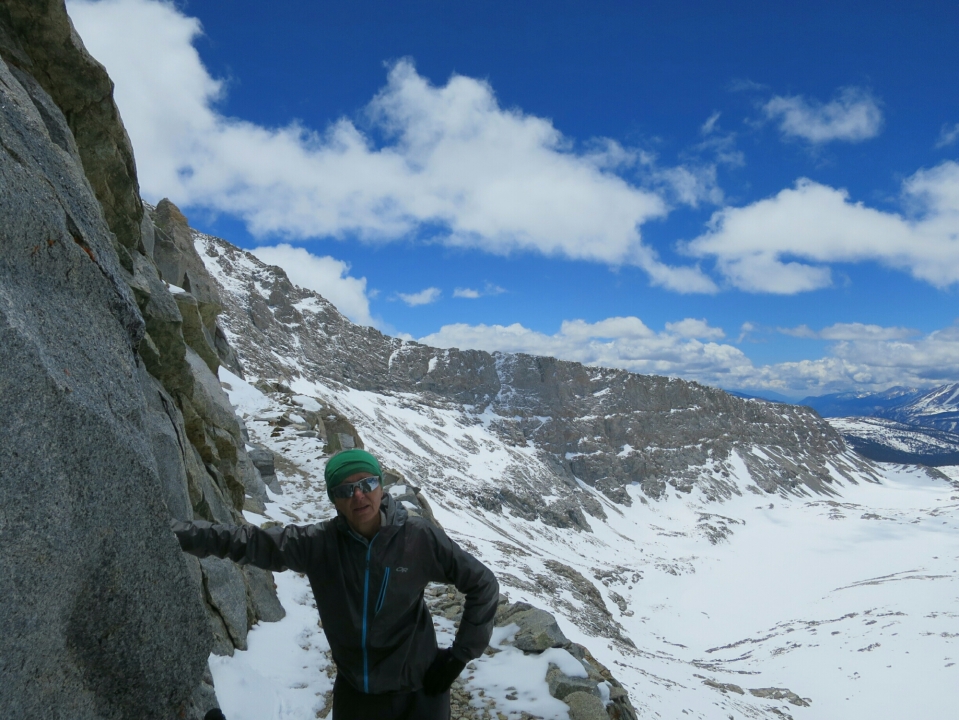 Crossing it was not as bad as I feared. Even though it was icy, there was plenty of snow to get a good grip. And as long as I did not look down, all was well. Hammer was in his element and had not trouble at all. For me again a feeling of enourmous relief to get over this obstacle. But we were still way short of the summit with one more obstacle. A section of trail right near the summit was covered in very deep cornice of ice and snow. This meant a bit of a rock climb around it. I tried to focus on one step at a time and not look down into the valley below, fearing that I might panic.  Slowly we cleared the rock field and jubilantly reached the summit. Adrenaline was pumping overtime. We were so excited that we forgot to take a photo together at the summit of the highest point on the PCT. Although Lou-Seal managed to sneak a photo. She is such a hog and peak bagger. 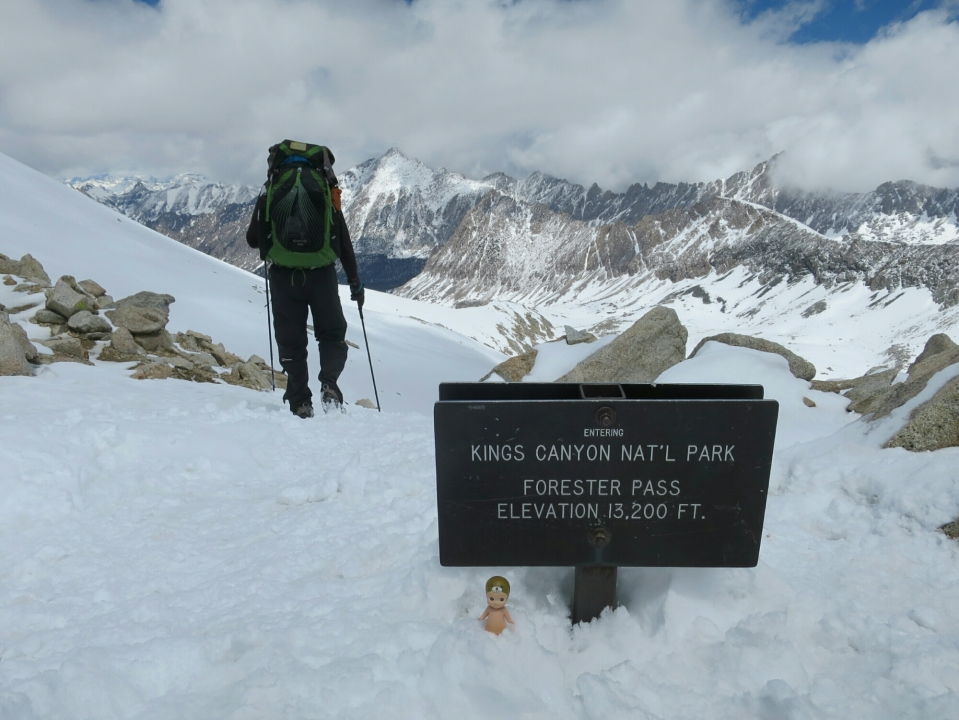 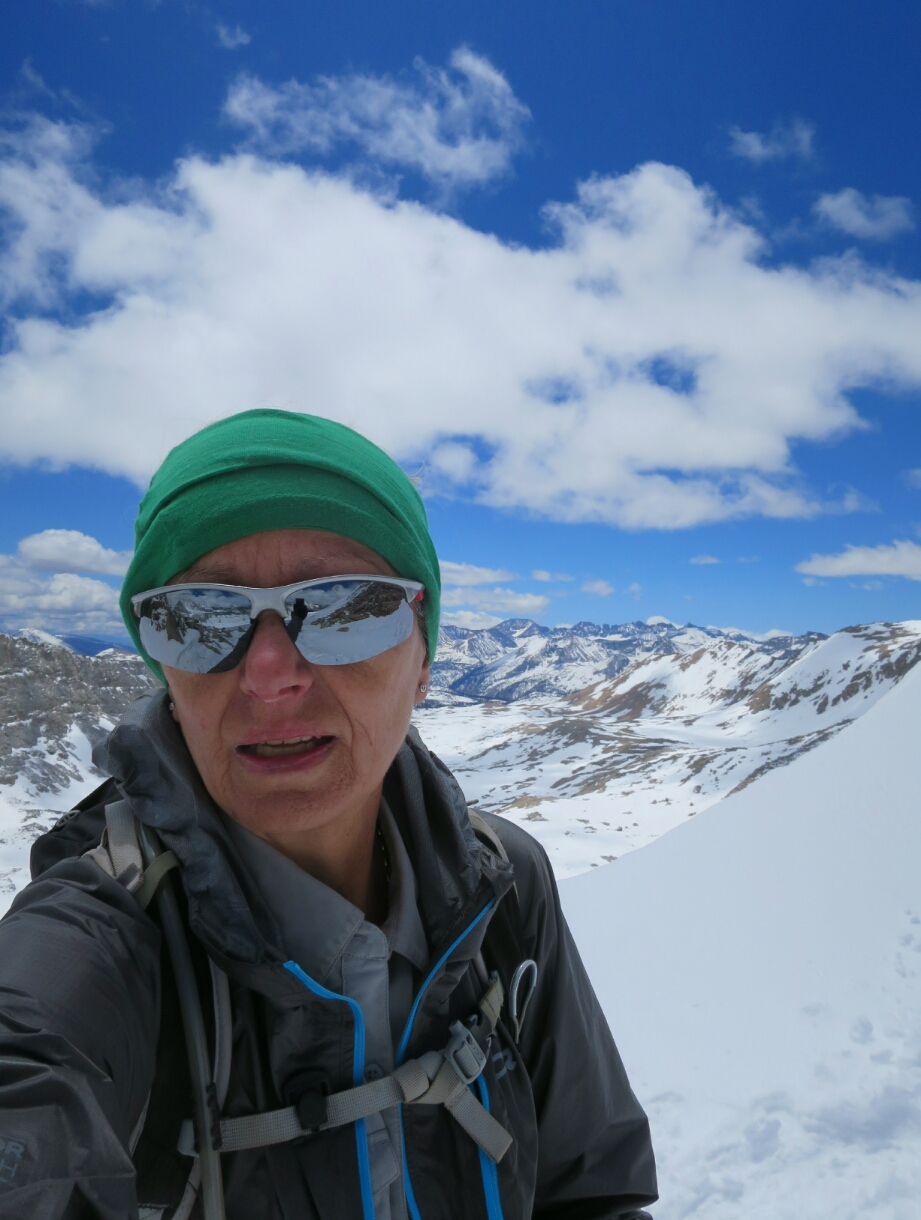 Excited and relieved to have gone over the much feared Forrester Pass we started the slow descent on the other side. The view north was of a huge bowl of snow surrounded by endless  mountain peaks. We were entering deeper into the Sierra range. There was no turning back now, although there were several spots further along we could have exited if the weather was to turn really nasty. 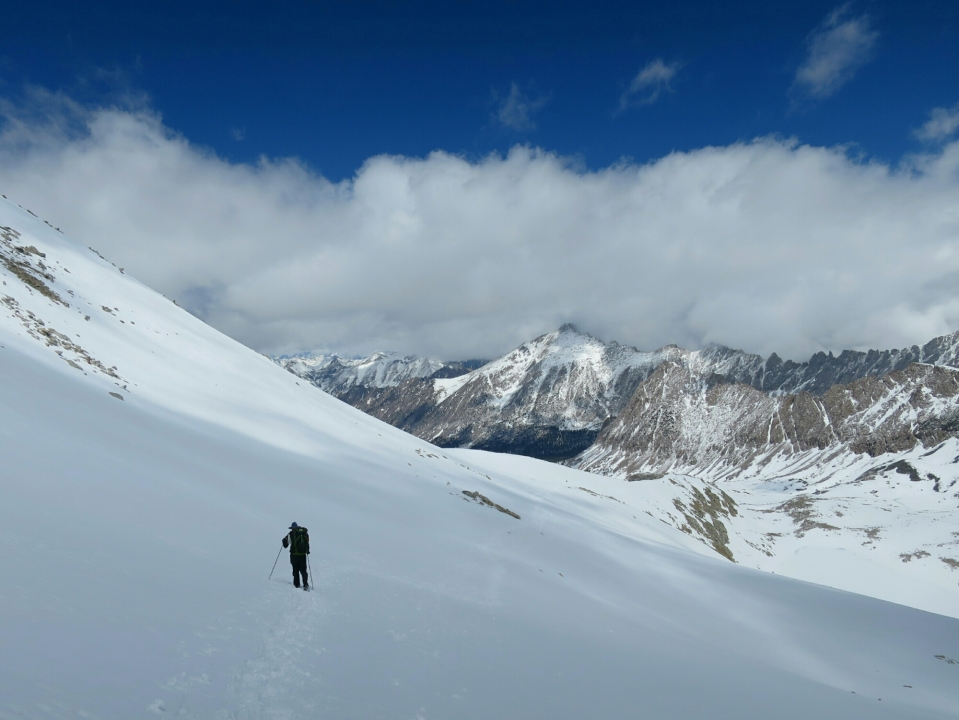 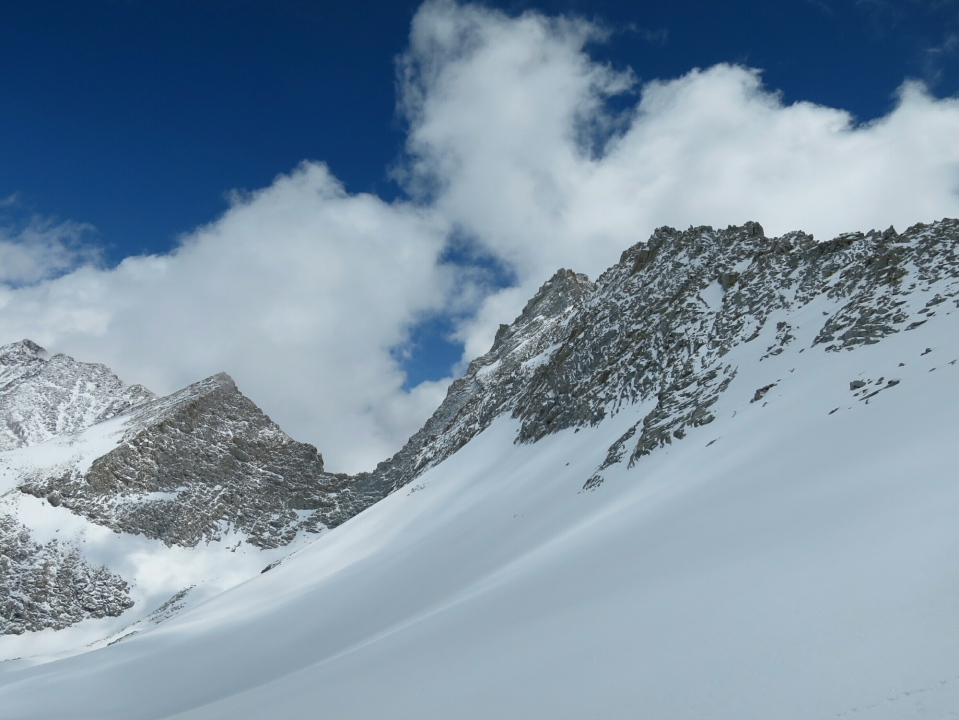 Humbled by the majestic surrounds we slowly made our way down towards a frozen lake. Hammer could not resist a glissande down the mountain (sliding down the mountain on your backside using hiking poles as brakes) and I soon followed. Only Hammer had his waterproof pants on and I did not. So a wet bottom for me. But it did not matter it was so sunny and warm. It felt like summertime. It was the warmest we have been since way back in the early parts of the desert.
The trail was completely covered in snow so we relied on old footprints in the snow and an occasional consult of the map. 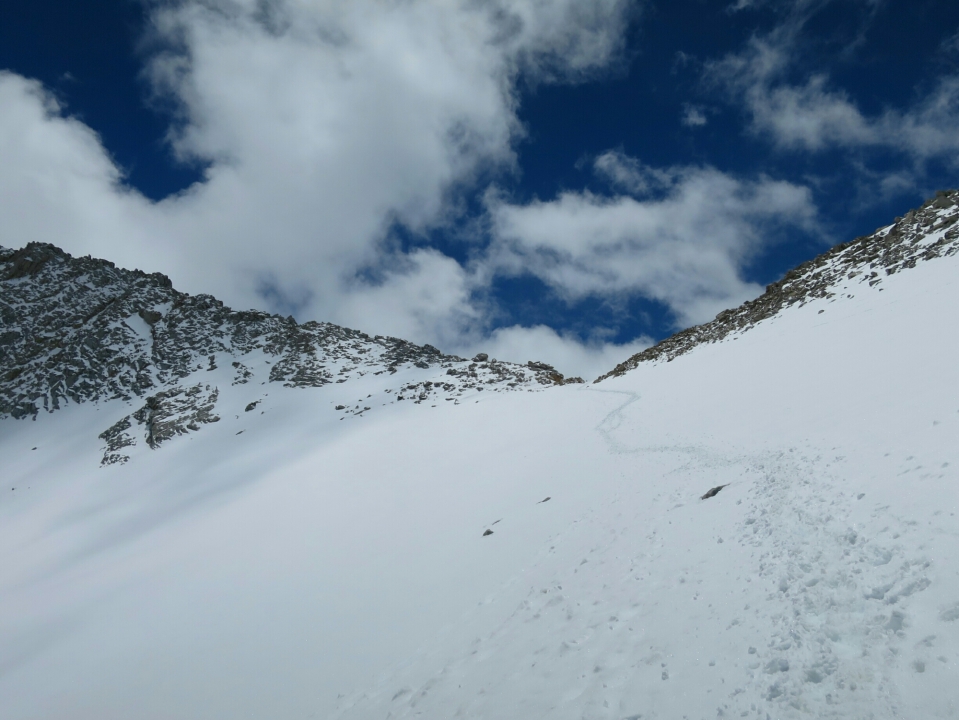 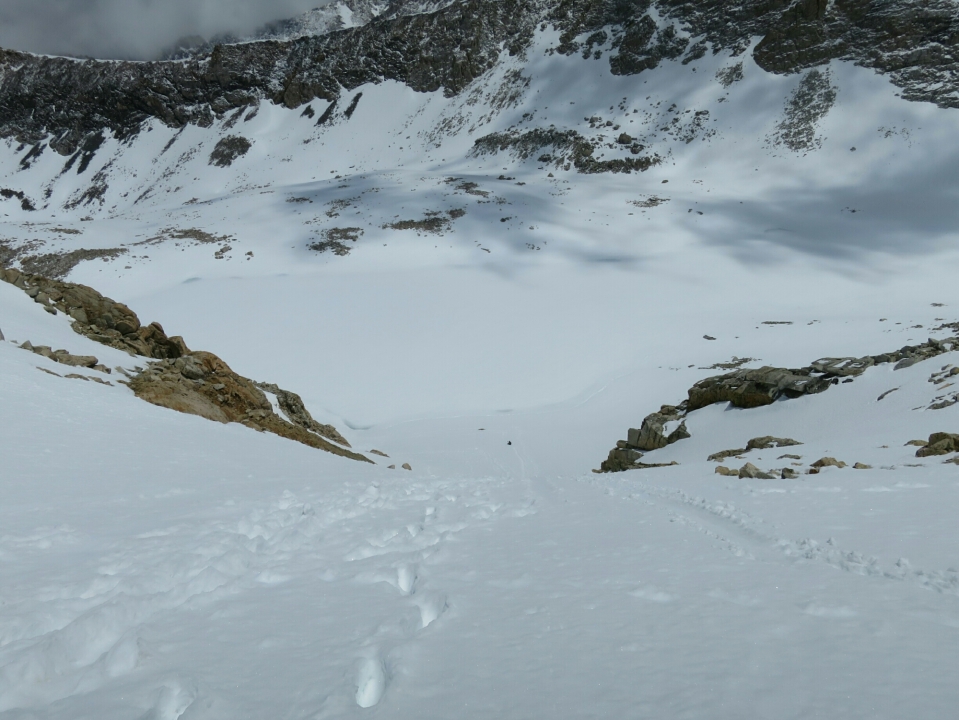 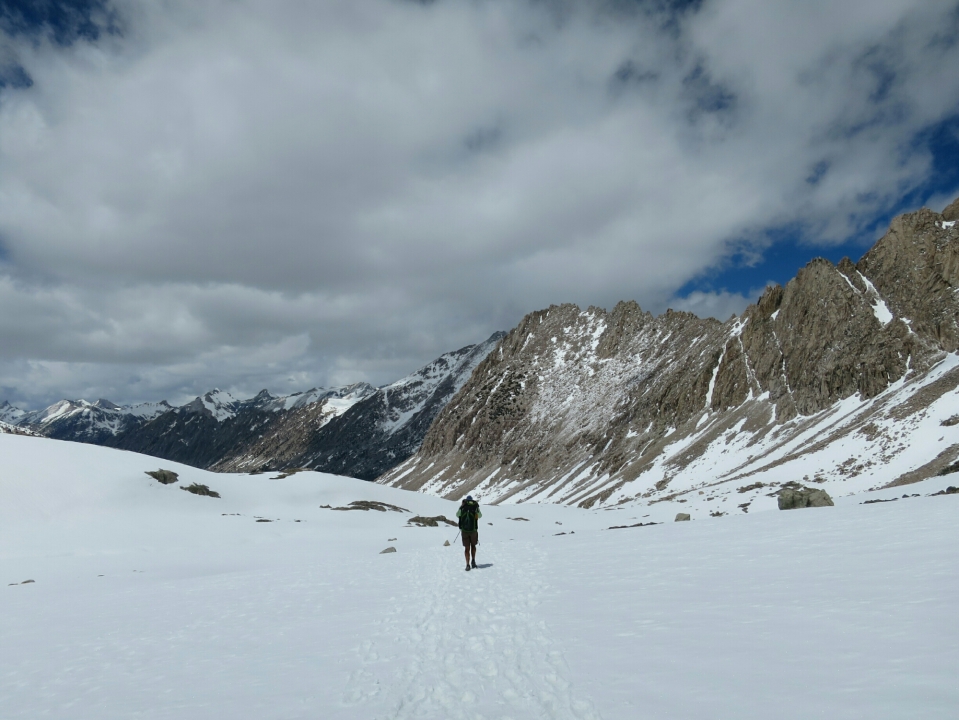 We have been running on pure adrenaline most of the day and did not  stop for lunch till mid-afternoon. We were accompanied by a hoary marmot wanting to come in for a closer look. 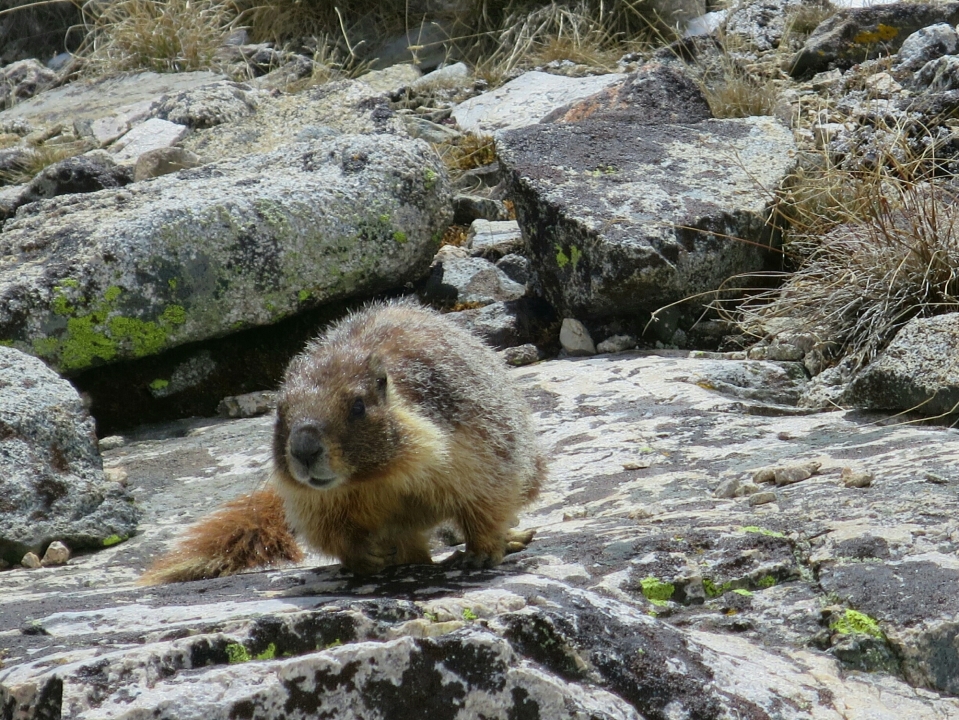 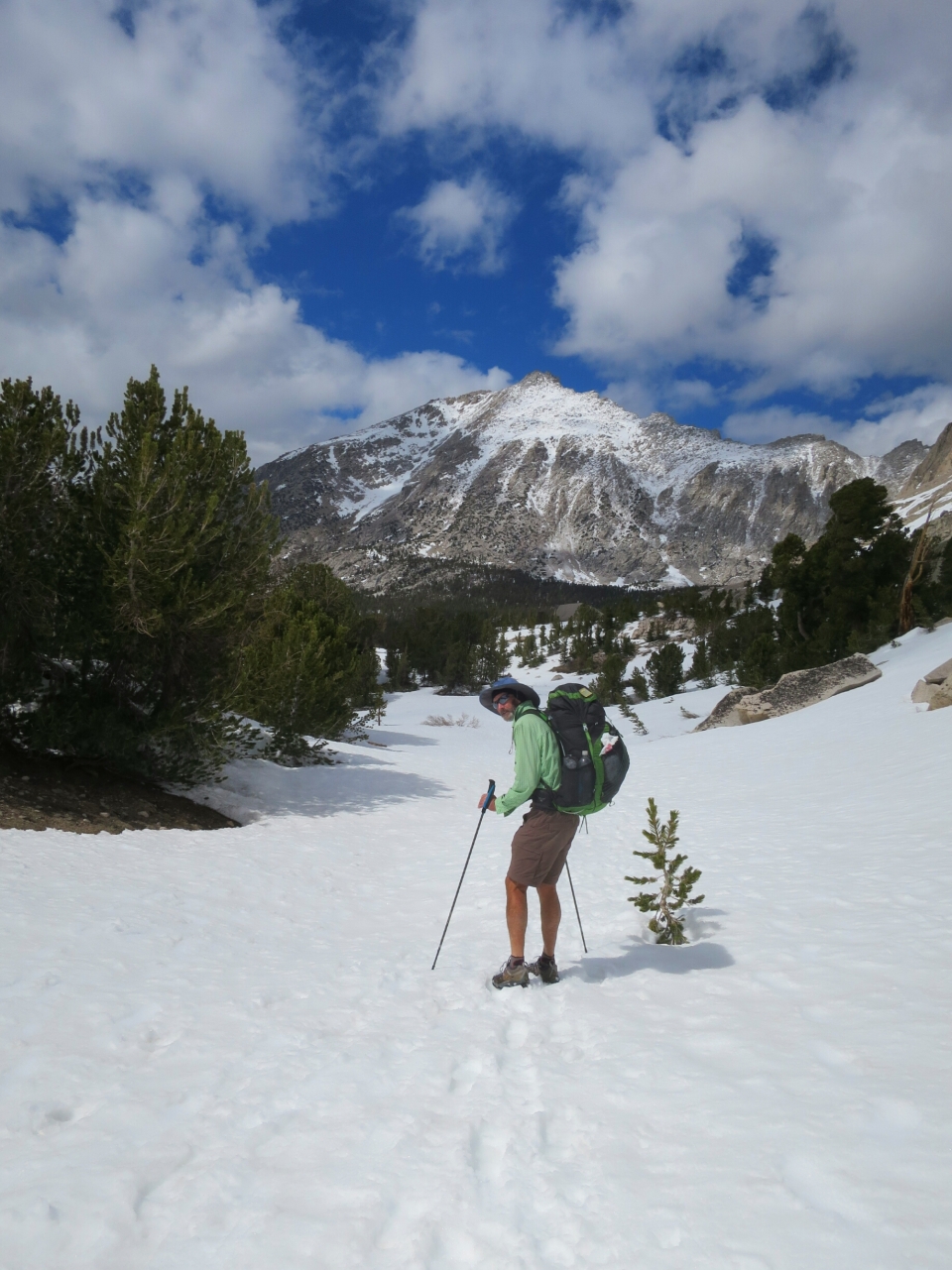 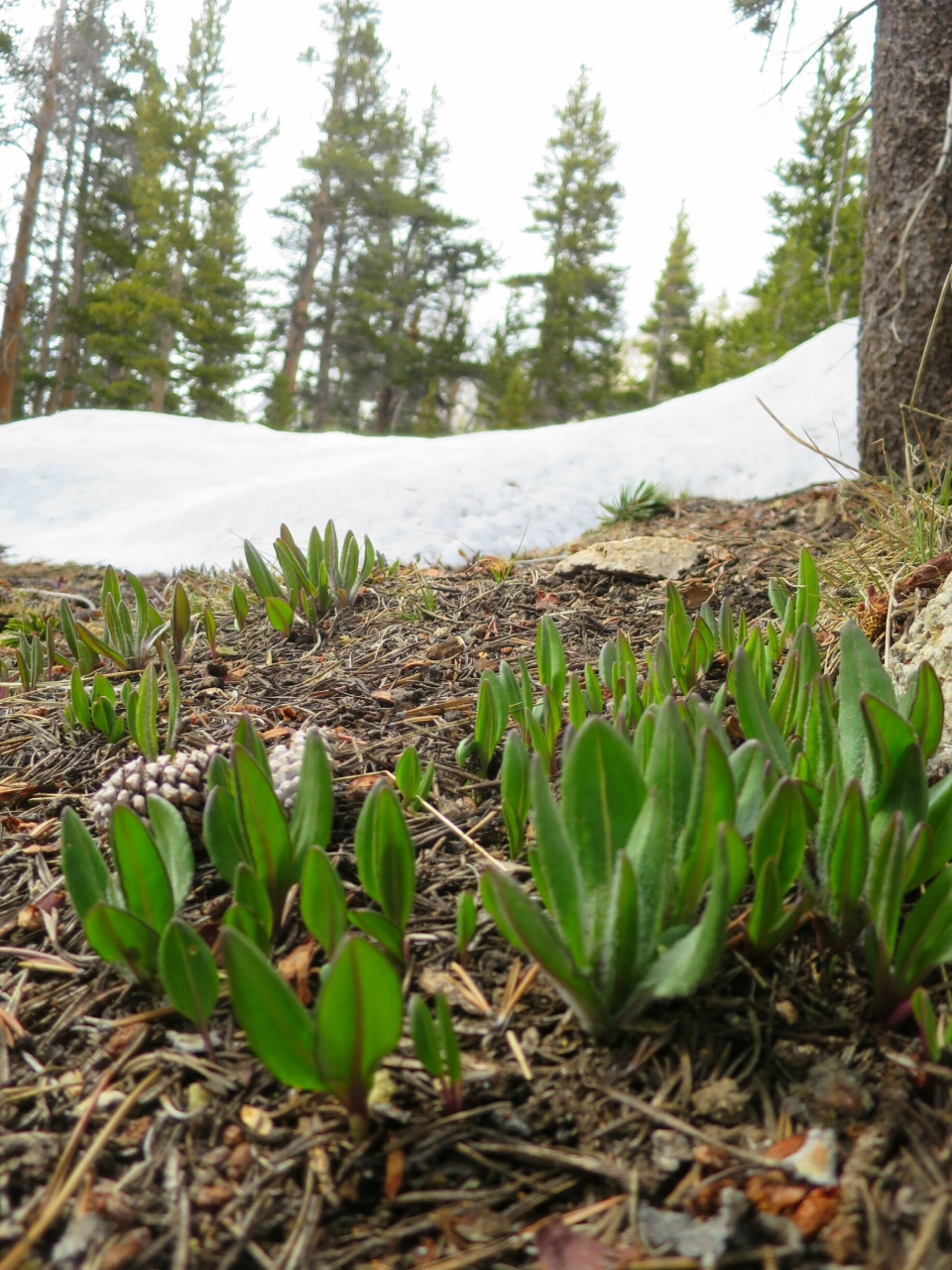 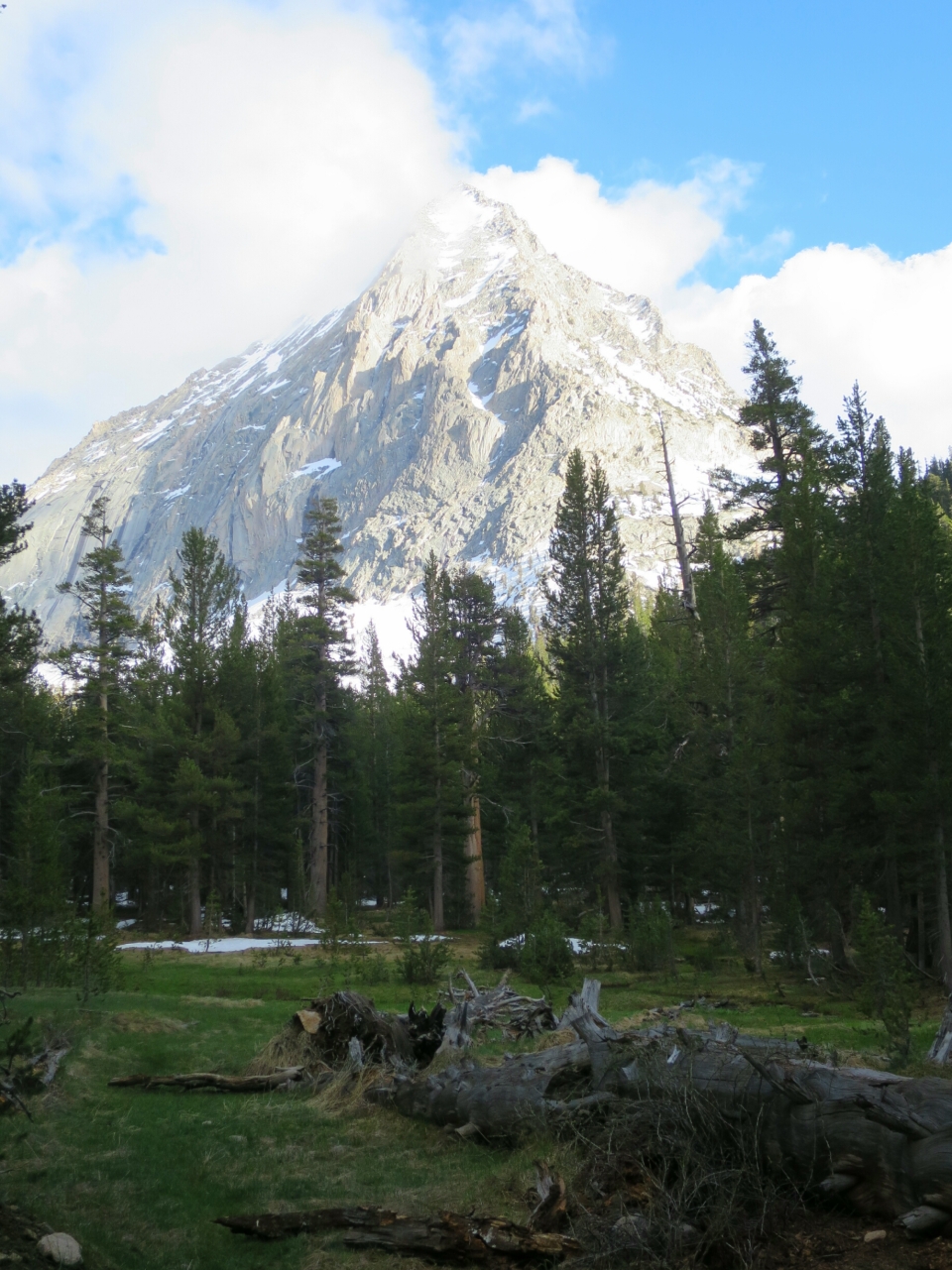 As we descended toward our campsite at Vidette Meadow the mountains around us became even more majestic.  We were feeling unbelievably lucky to have had such good conditions for the crossing of Forester Pass. Exhausted  but elated we fell asleep. Excited by the prospect of tomorrow may bring.