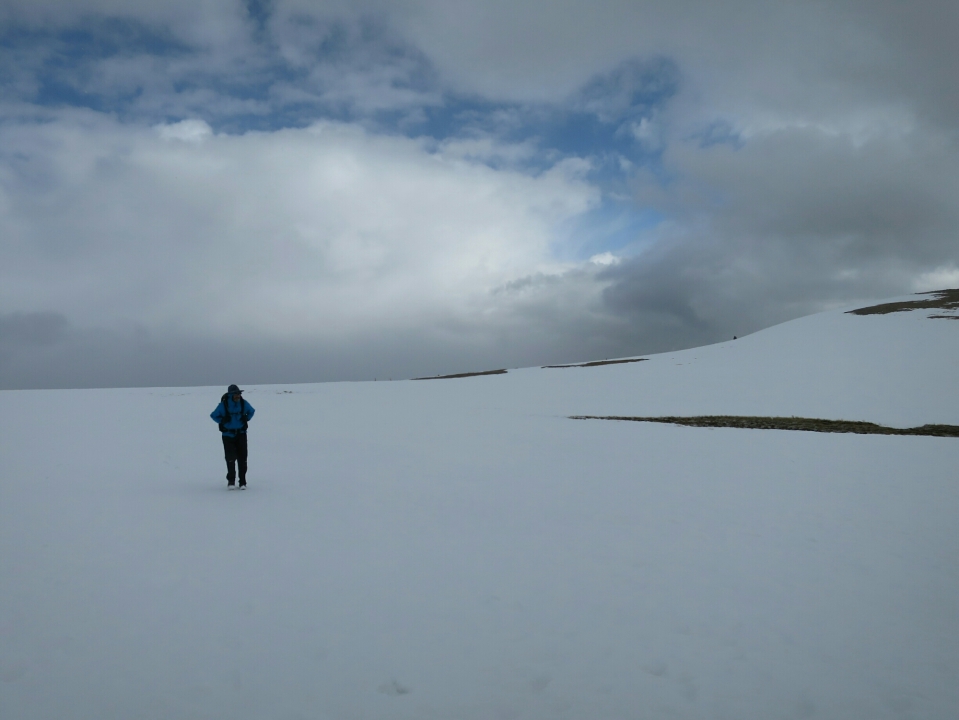 If yesterday had a little bit of everything weather wise,  today had that and more.
Our morning started with a tree falling in the forest nearby. It made an almighty crack.  We have seen so many huge pine trees that are dead, not sure if killed by disease or old fires.
Our campspot in the meadow was carpeted by a dusting of snow this morning. With the morning sunshine it looked ethereal. We were camped alone. We saw only 3 other hikers who passed us yesterday. We had met all of them before in the desert. All were upbeat and excited to be here. They were intending on climbing Mt Whitney before Forester Pass. It is comforting to know we are not out here all alone. Because the overwhelming feeling for much of the time is of being alone in this giant landscape and silent endless  space. That is until the silence is broken by overhead commercial jets or military aircraft out on frequent manoeuvres in this area.

From our campspot we descended towards Rocky Creek in nice morning sunshine. My feet were still frozen and we were at our very first creek crossing.  I was dreading the cold water so hurried taking my shoes off so I can get it over and done with. Not surprisingly, already cold feet go numb very quickly when immersed in snow melt water. Hammer thought it was cold but not unbearable. The rocky bottom was not slippery underfoot so made the crossing a bit easier.
Relieved to get this over and done with we commenced the first of todays climbs. Up until now most of the climbs have been on a relatively gentle grade but not this one. We had to stop several times to catch our breath. Clouds were gathering and by the time we reached Crabtree Meadow and the junction with the Mt Whitney trail, a light snow had begun to fall. Luckily we had lunch by the time the snowfall increased.

As there was hardly any wind it was not cold but the snowfall became heavy and persistent. We had many large patches of snow covering the trail and with the snow falling previous footsteps were being covered up. In the poor visibility I was a little bit concerned about going off trail which we did several times. It was just so difficult to see too far ahead with snow in your eyes.

We had 2 further creek crossings which were a little bit bigger then Rocky Creek – Wallace and Walker Creeks. We were ever so lucky that for both of these crossings the snow stopped and the sun  shone through. Made taking your shoes off a bit more bearable. 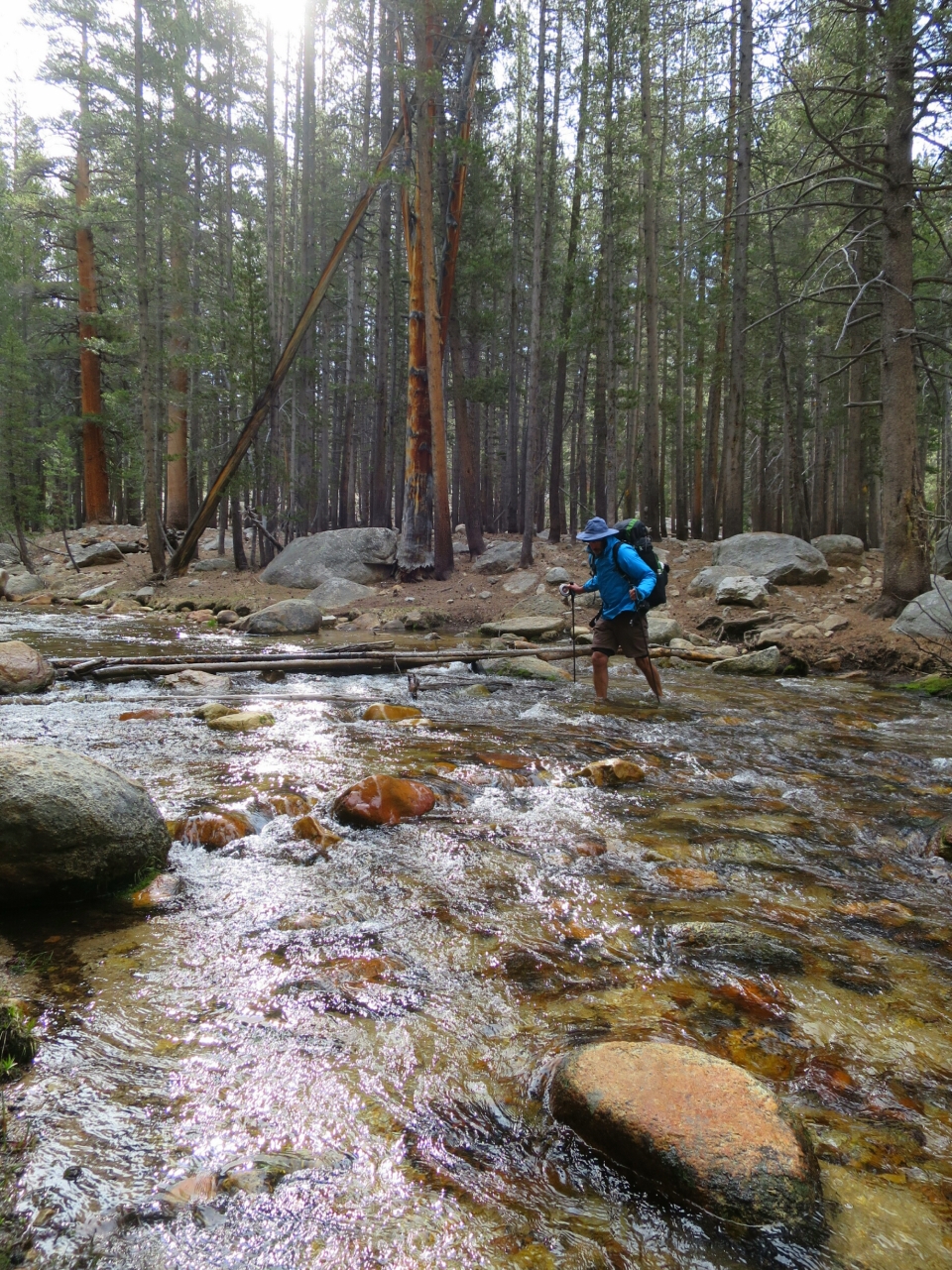 We were on our last ascent towards Bighorn  Plateau when the snow started falling again. This time it was heavier and with some wind. Once we reached Bighorn, which is a vast open plain, the snow was falling  so heavily it made navigation very difficult. We (or maybe just me)  had a mild moment of panic before we could consult a map and work out which way to go. It must have looked very funny, us standing there in this open plain with  heavy snowfalling and we were peering into a phone screen to find our way around. We felt so exposed in this vast open space with snow and wind whipping about. It did not help that just as we found our way forward I also found recent paw prints  in the snow. Lucky the bear was not going in our direction. 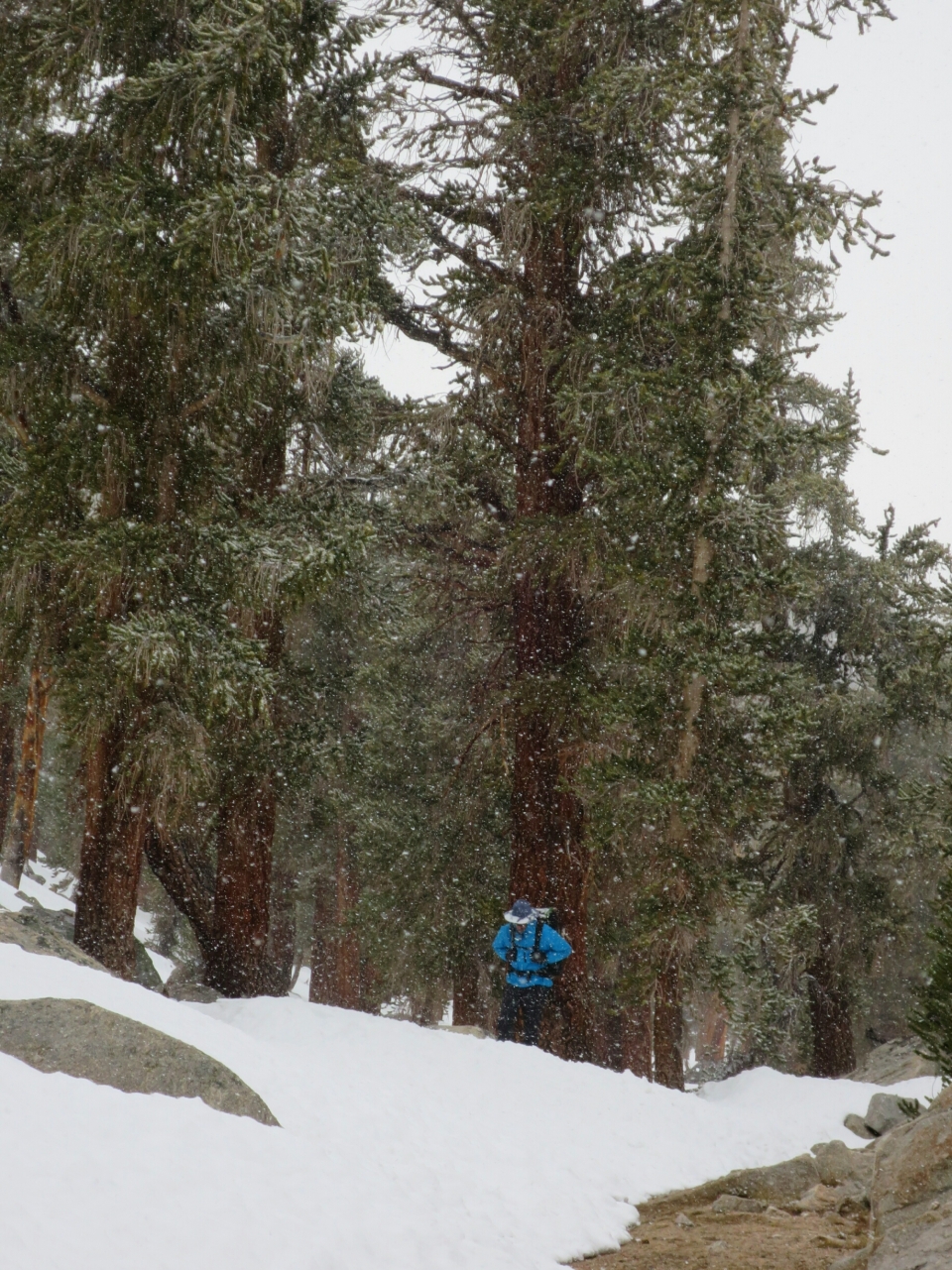 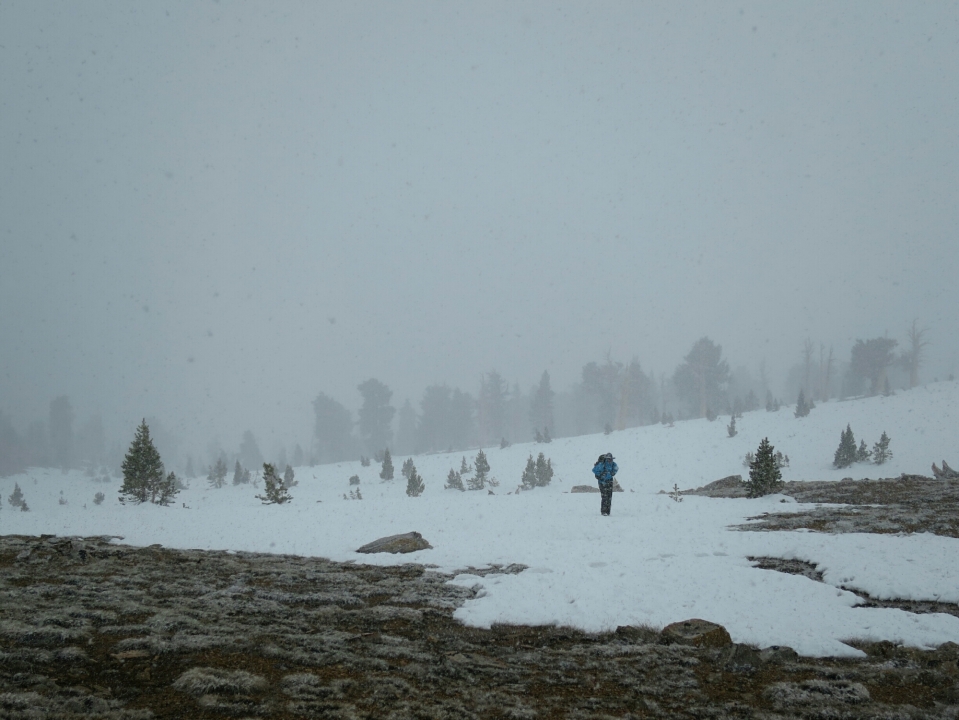 It was an enourmous relief to back on track and descend towards Tyndall Ranger Station where we planned to camp for the night.  This is at the base of the ascent of Forester Pass.  We rushed to get the tent up before the snow started again. We are camped  5 miles from Forester Pass, praying for sunny skies tomorrow.