The sound of chirping birds and gushing of snowmelt laden creek were our alarm clocks this morning. Such a change from the frozen silence of the past 2 days. The sky was clear and a beautiful deep blue. I woke up in pain. I felt like my lips have been Botoxed overnight and someone peeled the skin from inside my nose. Duhhhh….just realised that yesterday we forgot to put on sunscreen. It was frozen in the morning and later we were too pumped to get over Forester Pass to remember. Such a silly and very painful mistake.

Before falling asleep last night I reflected on our days experience. I struggle for words to describe the grandeur of the landscape. When we were on top of Forester Pass looking north, the mountain peaks on both sides reminded me of soaring cathedral spires. And as we descended it was like entering nature’s cathedral. I am feeling truly blessed abd privileged to be here to experience this, the feeling of being so small and insignificant in the grand scheme of our planet.  I hope the photos capture some of these feelings and emotions. 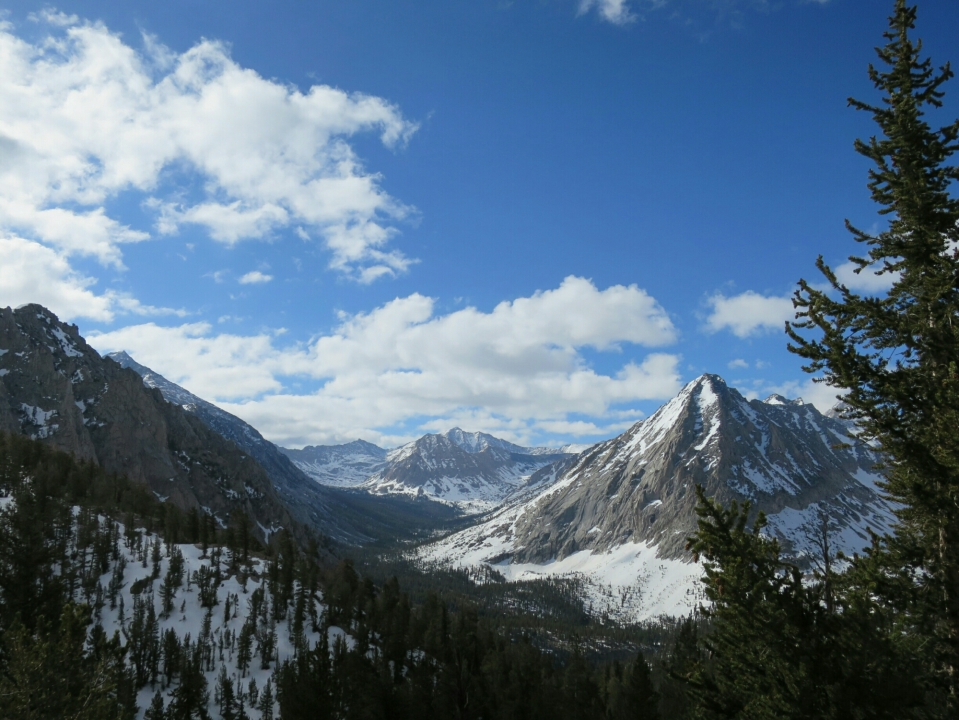 This morning we only had 4 miles to ascend Glen Pass which stands at  11, 947 feet. It took us almost 4 hours of sheer hard work. The trail up was icy and steep. Any switchbacks were covered in deep snow so it meant going straight up. Near the top required quite a bit of rock climbing over loose scree on a sheer slope. Not feeling very comfortable and trying not to look back down. Once on top the view north was stunning with frozen lakes forming chains down the valley.

The descent was just as difficult  as the ascent, lots of snow on a very steep slope with drop offs. It was very slow and painful progress. My quads very burning. Every step had to be firmly anchored before moving for fear of sliding down the slope. Once we cleared the steepest part of the descent we ended up doing 2 glissades down the mountain to get to the valley floor. It was on an icy crust and not so comfortable for glissading. 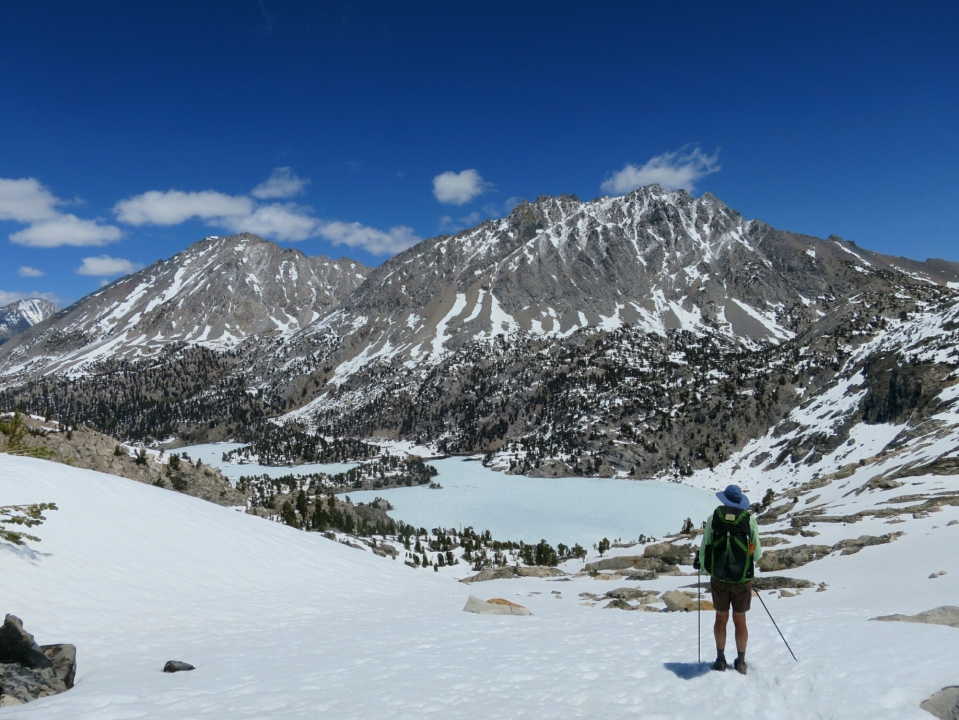 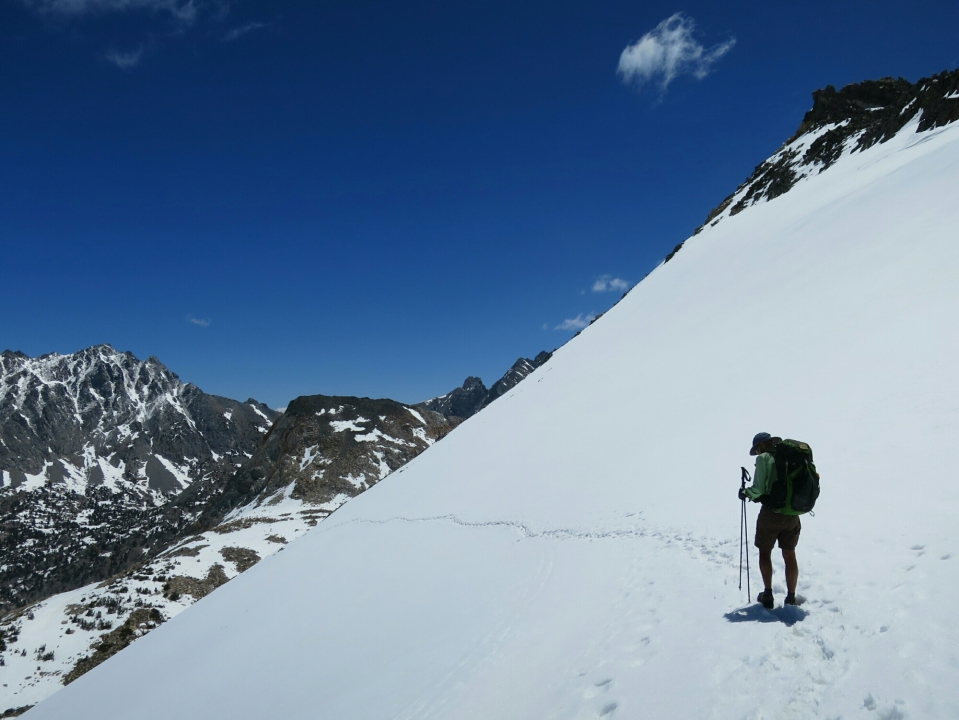 Once we were off the steepest part of the slope we weaved our way around one frozen lake after another. This was also a bit hair-raising as the snow was on steep slopes going down toward the lake.
We stopped for lunch at Arrowhead Lake outlet which was flowing. Such a great spot with water so clear you could see trout swimming.

The rest of the day we weaved our way around several lakes,  the last of which was not frozen. We thought we were snowfree and on the home stretch to our camp spot, but it turned out to be not so. Even along Dollar Lake, which was not frozen, we had to cut across a steep bank which was north facing and still covered in  deep snow sloping down into the lake. Such a relief to get this over. The fear of sliding down into the water below was never far away. Just after crossing this patch of snow we saw a coyote on the other side of the lake. Amazing how how well it blended in with the landscape. It appeared to be hunting along the lake edge. 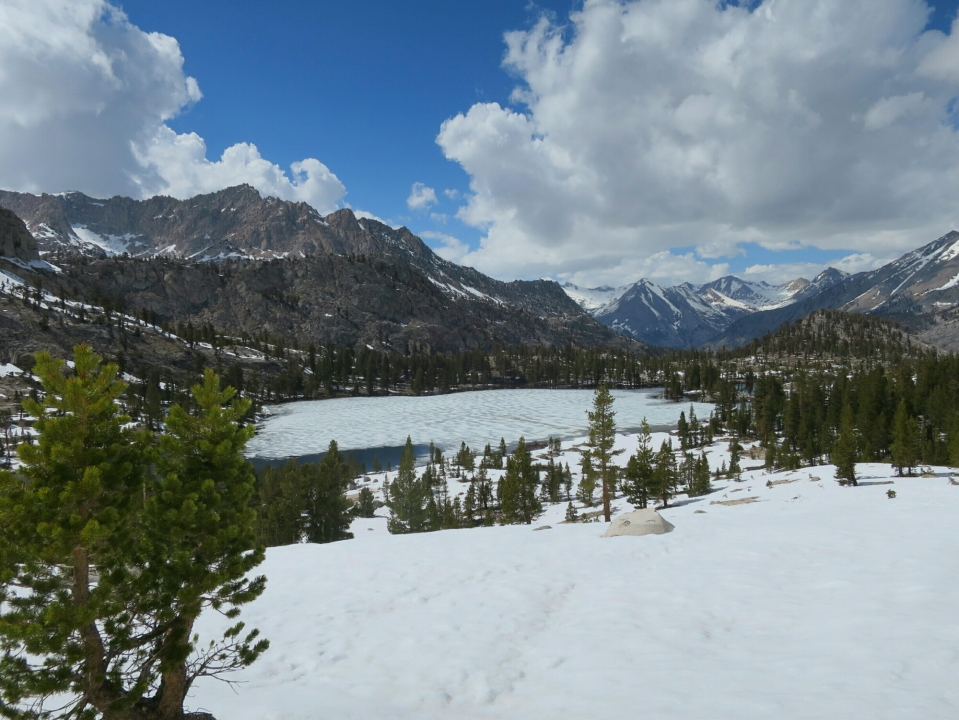 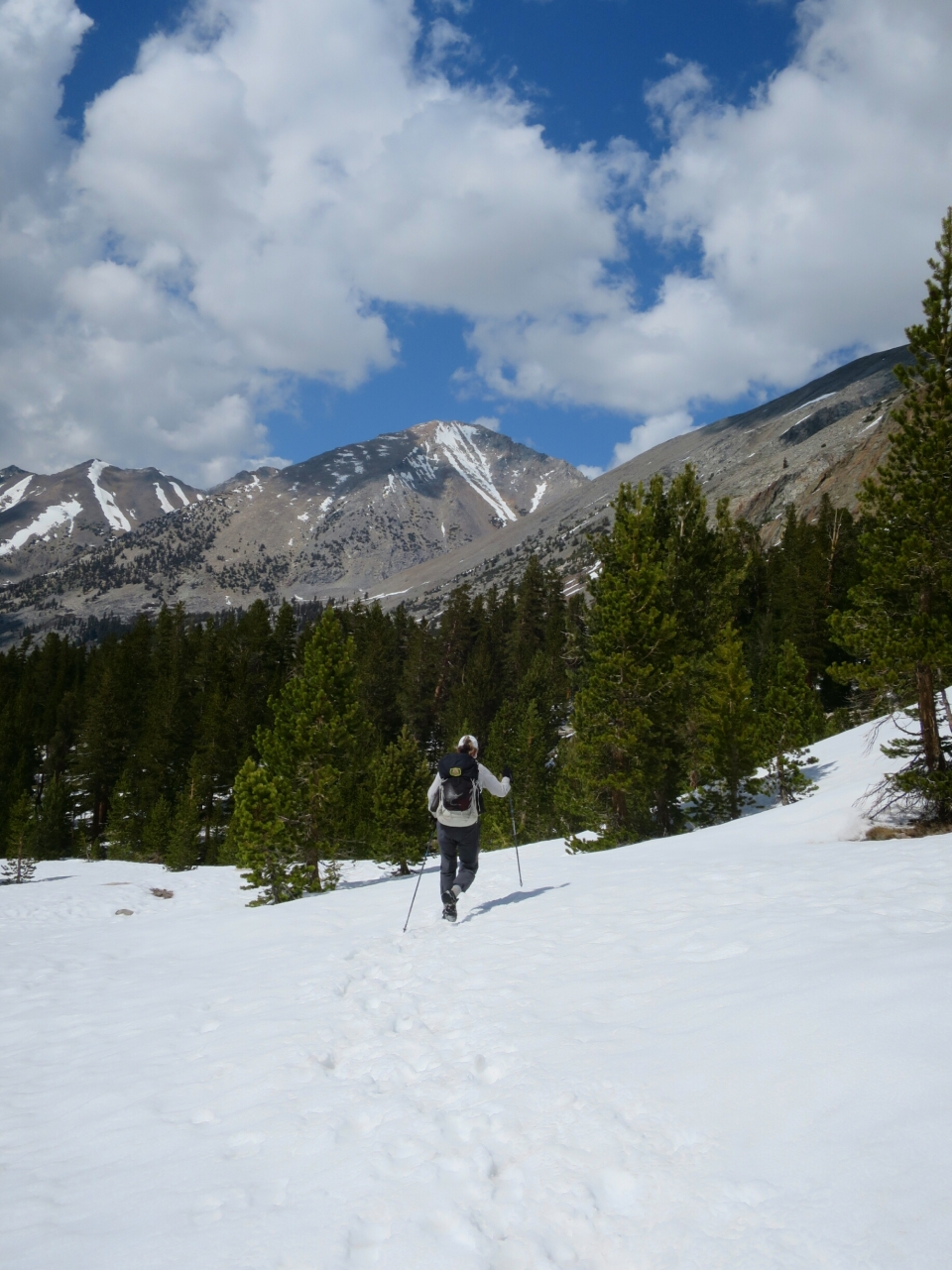 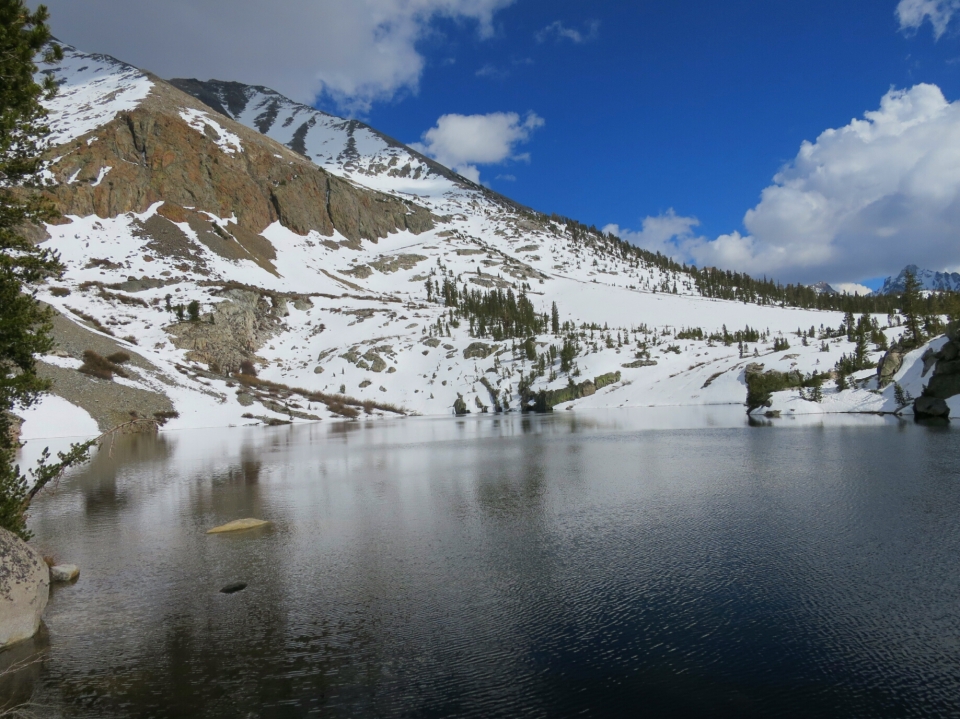 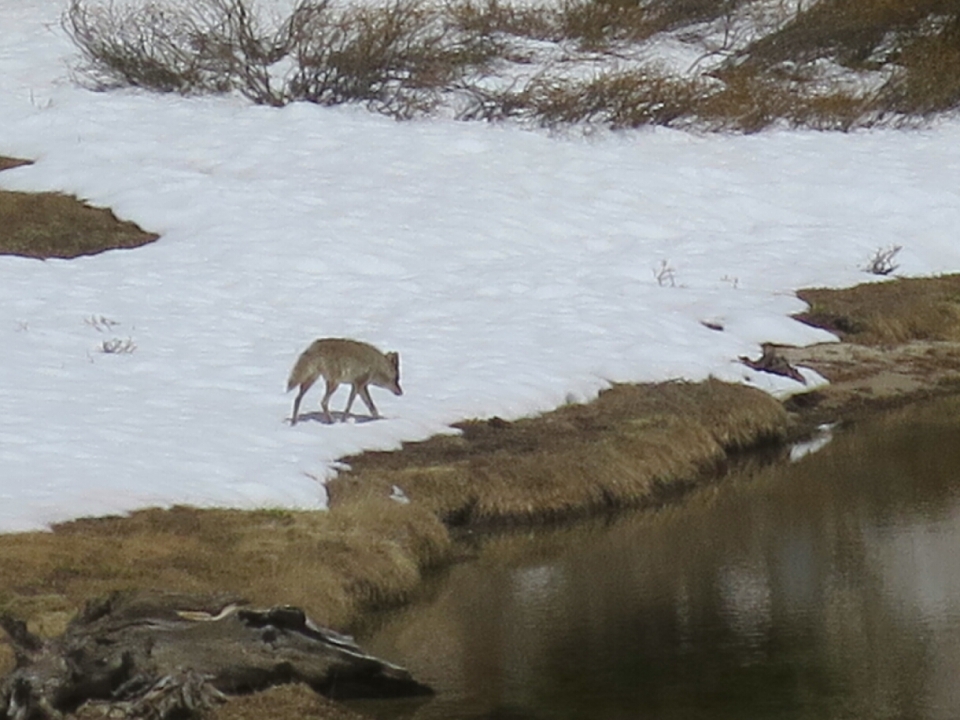 Even though we were descending, we were still not out of snow. We had a really frustrating section of snow hiking where the snow was undercut by upstream snowmelt. It was all on sharp granite scree. We kept sinking through the snow, worried that a sharp rock would scrape our shins as our feet sunk through the snow. And just as we were finishing with this section, 4 hikers passed us (Gillingan,  Brian, Little Spoon and Cheese)  and soon another 2 followed. And we passed a family of 3 heading in the opposite direction towards Dollar Lake. Amazing, we had only seen one person in the last 3 days. The northbound hikers had all been in Bishop for a rest and resupply and were coming back on the trail. So for the first time since leaving Kennedy Meadows  we were camped with other hikers by the Woods Creek suspension bridge. It had started to rain about an hour before we reached the campsite and continued to fall while we were setting up camp. We were at relatively low elevation, at just  over 8,500  feet hence the rain and not snow. You know spring has arrived here, we saw our first spring flowers since entering the Sierra mountains and we had mosquitoes. The last 3 miles coming into camp we had beautiful trail, clear of snow. So nice just to hike.