The flow of the creek we were camped by sounded like the roar of a jet engine. Even the smallest creeks make such a huge sound. It is daunting as you approach some, knowing that you will have to cross them. Luckily Woods Creek has a suspension bridge, so our feet will stay dry for some time.
The roar of Woods Creek stayed with us for about 2 hours but our feet did not stay dry. We had a creek crossing within the first half hour this morning.

It was great to see so much life around us.  Spring has truly arrived. We had not since so much life since leaving the desert. We did not hit snow till about 10,000 feet. From there it was just a hard slog, even though the snow was firm underfoot. 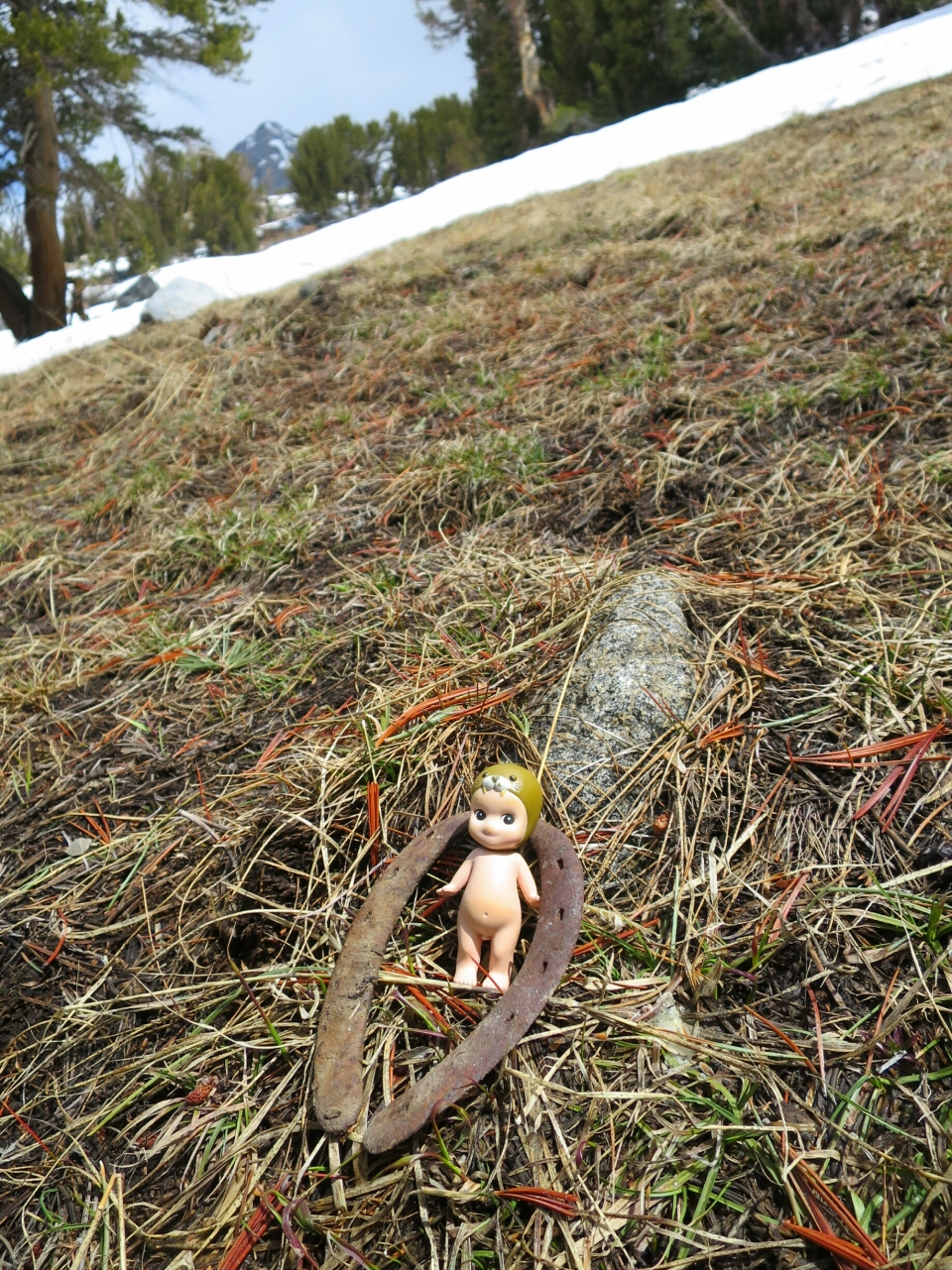 We had 2 large river crossings of South Fork  Kings  River. They were both a bit daunting but we managed to cross without incident. We were approaching Pinchot Pass this morning. It was not as easy as it first appeared. We followed other hiker tracks, the 6 that camped with us at the bridge. At a point close to the top of the steepest part of the pass  the tracks diverged.Hammer went right before I even reached him and I wanted to go left.  It was too late he was committed, so I followed. This turned out to be heart in throat, thumping scared clamber over vertical rocks suspended over sheer snow slope. At one stage my leg sunk thigh deep into snow against the rock. I could not get traction to get out and scared of pushing too much should my pack unbalance me and send me tumbling down the slope. All this on a sheer surface of snow and rock. Hammer had reached the summit but could not see me from above so he was calling out “Are you OK?” Well no I was not but this was not a good time to panic, I had to somehow extricate myself and get over the rock above me.  I made it but with much rising panic – not happy. The footsteps to the left, lower down the slope led to a clear section of trail then some deep snow and to the summit. We chose the challenging option up Pinchot Pass. 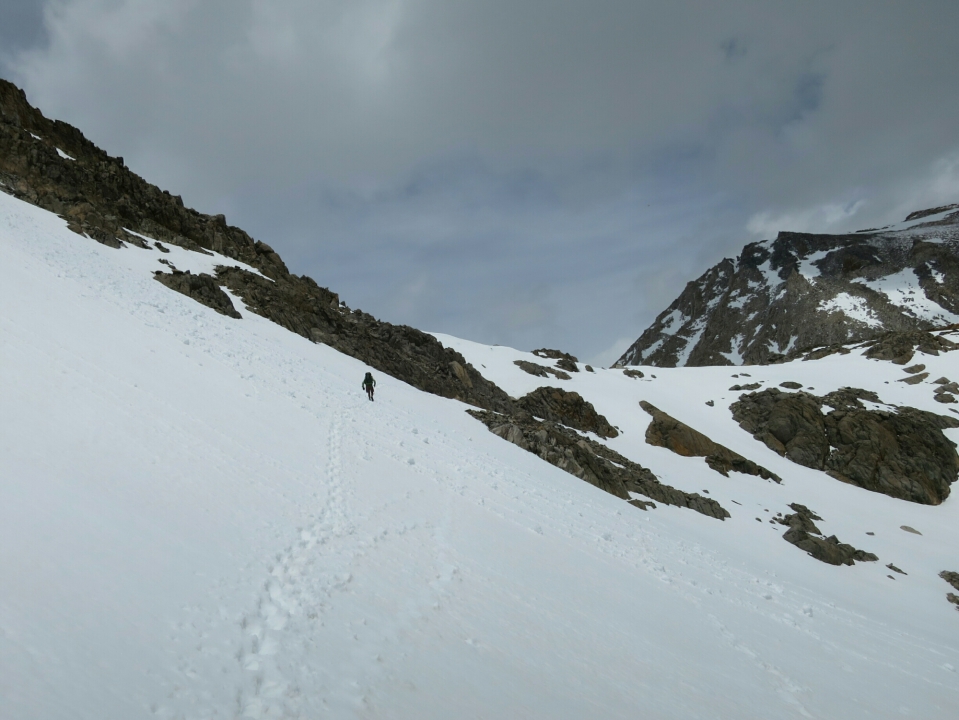 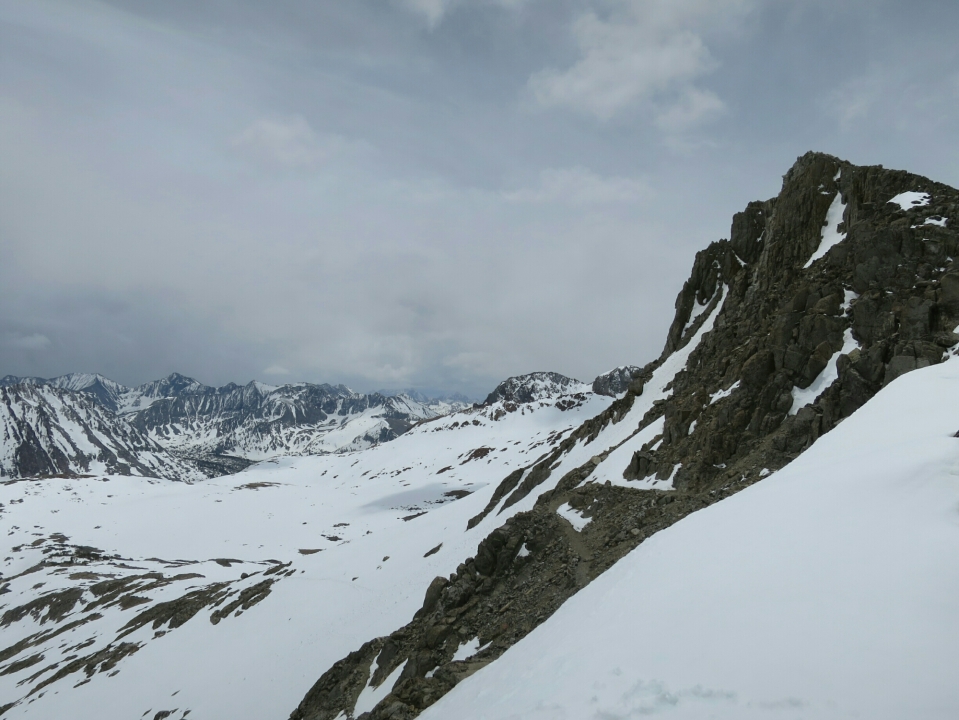 The descent off Pinchot Pass  was the easiest of the 3 we have done so far. An easy descent to Marjorie Lake, which was still frozen where we stopped for lunch. We just got the pot boiling when it started to snow. Looking behind us,  dark clouds were gathering. We managed to eat lunch without too much snow falling and we hiked for about half an hour before the snow started to fall in earnest.  So on with our rain gear, even though it was not overly cold.

The hiking in snow here was not that hard as we had lots of fresh footsteps to follow.  We had another 2 crossings of the South Fork Kings River which was flowing pretty fiercely. It was still snowing and our feet were wet so on the first crossing I decided to leave my shoes on to get better traction on the bottom. Big mistake, there is difference between snow soaked wet and river submerged wet shoes and socks while hiking in snow. Hammer wisely took his shoes off so I waited for him to get his shoes back on while I slowly froze. We hiked on knowing we did not have far to go before we set up camp, just after the second river crossing.

We passed the group of 6 hikers who were ahead of us. They stopped in the first snow storm and started a fire to dry out and get warm. We did not stop for long with them as we wanted to cross the creek and get our camp set up. We hiked on reaching the second river crossing and this time I took off my shoes.

We had about 0.1 of a mile to get to our campspot when the sky opened up and the most intense snow storm hit us. It was gusting snow drifts. So we stopped under a tree to get our wet weather gear back on and hiked on hoping to find the campspot. We could not see anything that was not covered in deep snow so we turned back to a clearing under a tree. The snow was unrelenting. We managed to get the tent up and get inside.

Lying inside our warm sleeping bags waiting for blood to find our feet.  We are so happy to switched our eating arrangement since entering bear country. We cook a large hot meal at lunchtime and in the afternoon about an hour before reaching camp  we would stop to eat a smaller meal. So by the time we reach camp no food preparation is required. It means we can set up camp and get inside our warm sleeping bags straight away.
Today I must admit to feeling a bit of accumulated fatigue and probably a calorie deficit. We worked pretty hard but with the combination of altitude and snow on the ground it made for very slow progress. As we are discovering,  there are no easy passes in the Sierra. It is still snowing outside and Hammer is worried that had tent may collapse under the weight. So it will not be a peaceful nights rest tonight.  Hoping the snow stops and the sun is back tomorrow. We have only 2.5 miles to the summit of Mather Pass  which is at  12, 096 feet.