We woke this morning to everything being frozen our shoes, socks, backpacks and water. By far the coldest night we’ve had on the trail so far. I dared not move inside my sleeping bag in case I disturb the warm patch created around me. We dreaded looking outside as the rainfly was like a sheet of ice surrounding us. Last night as I was trying to fall asleep I could hear an occasional commercial jet flying over us. In my mind I could see the passengers  on  board sipping champagne while enroute to Tahiti,  or Bermuda or the Carribean or Hawaii.  You get the drift, not many were travelling to Siberia. Not that I wanted to escape. I just wanted a bit of respite from the cold and I would happy to be thrown back into the freezer.  So next time I fly over some snowy mountains landscape I will be sparing a thought for some half-demented soul lying in a tent somewhere below me.

Hammer peaked out through the frozen tent fly and let out another yippee – nature’s blessing again – brilliant sunshine. It makes putting on frozen shoes and knowing there were two more creek crossings so much more bearable.

When I look back over the past 7 days I realise that I have not really described how beautiful it is to be here and at this time of the year. The landscape is constantly changing as we move north – each day is almost sensory overload. By the time I come to write this journal at the end of each day I am tired and it is really difficult to recollect the scenery. I know I’ve said it before but we do feel specially privileged to be here despite the frozen shoes and freezing cold starts in the morning. 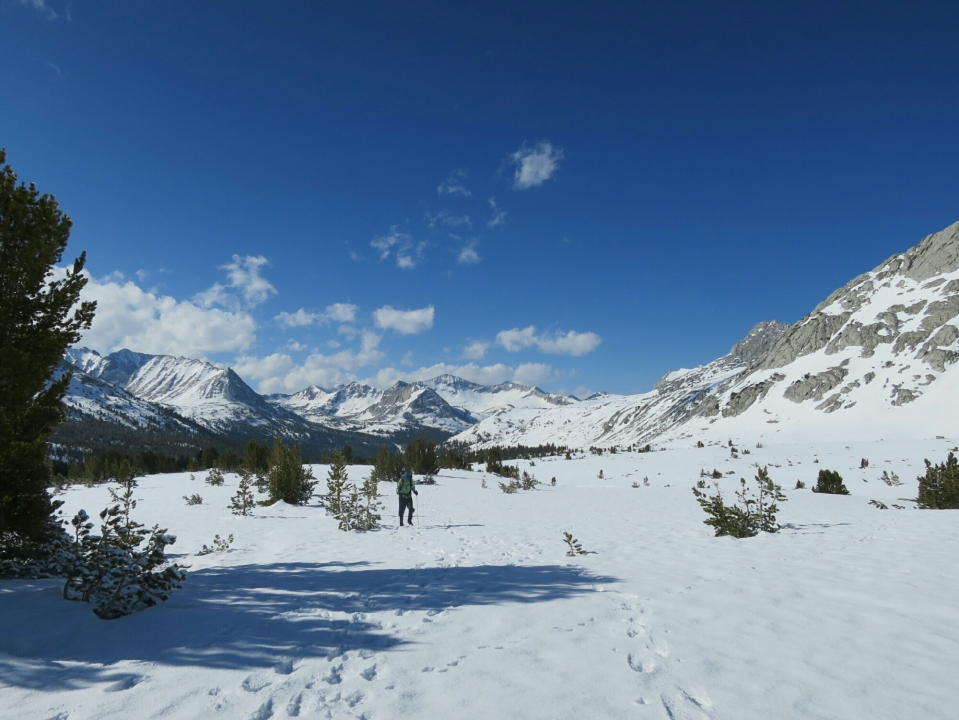 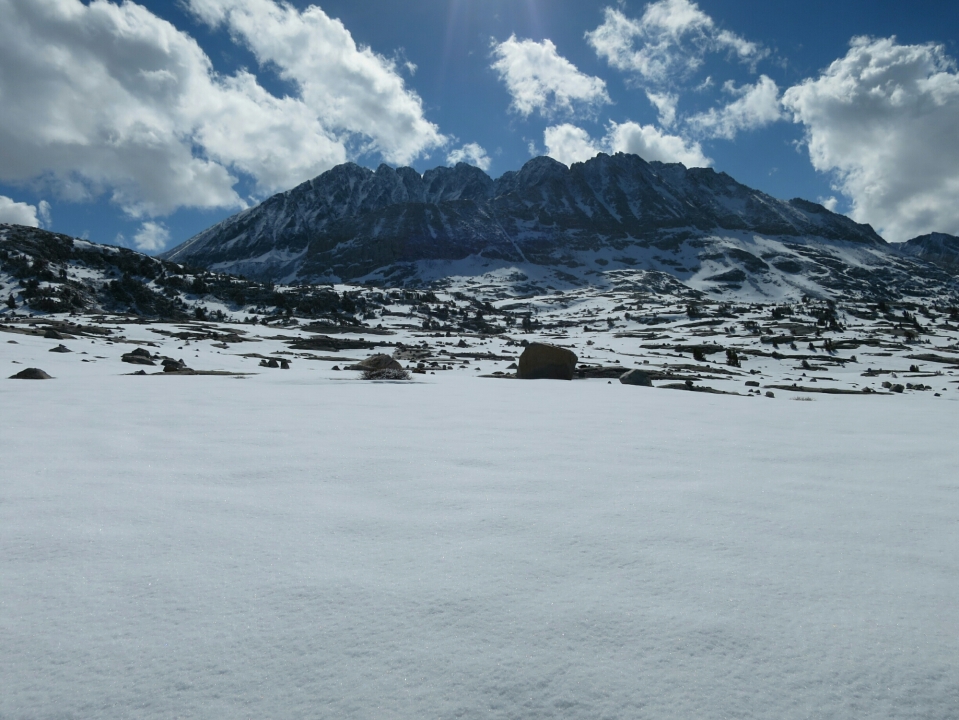 The contrast between the start and the end of our day today could not be greater. We started in snow, about 4-5 inches had fallen overnight, to finish the day in a beautiful green valley which was in full spring bloom. 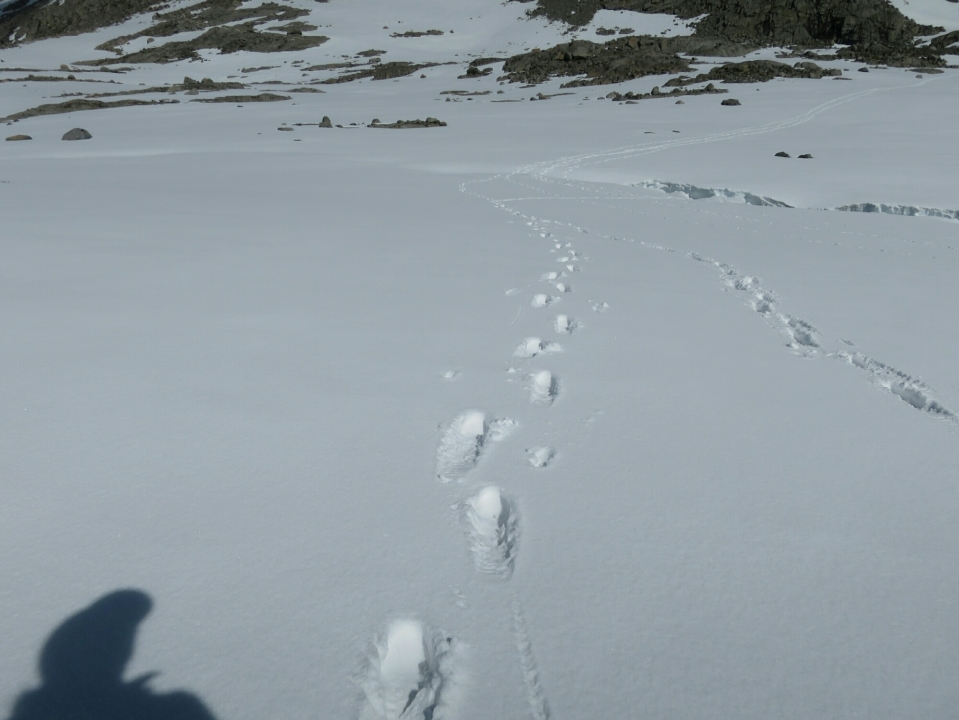 The group of 6 hikers we passed late yesterday afternoon had gone past us this morning before we finished breaking camp. Great, it will be easier for us to follow their tracks.  We won’t have to navigate. We were slow to get going and eventually left camp at 8.30 am, our latest start since we started on the PCT.  The freshly laid tracks were easy to follow in the new snow and we made good time to the start of the steepest portion of the climb. From the bottom we could see 2 hikers about to go over the pass. Wow they started an hour before us. The final section of the ascent over the Pass was brutal. There were sections of clamoring over huge boulders. Again I found this to be nerve wrecking. The snow was soft on the way up and difficult to get sure footing despite the microspikes on our shoes. From midway up the final section I looked and could not see how to get onto the summit as the whole pass was edged in metres of snow with an ice cornice on top. The wind was blowing in strong gusts and  whipping snow drifts which cut like a razor.  I tried not to think too far ahead just one foot in front of the other. Knowing that others had gone over just before us gave me some comfort that there must be a way to get over the ice crest. 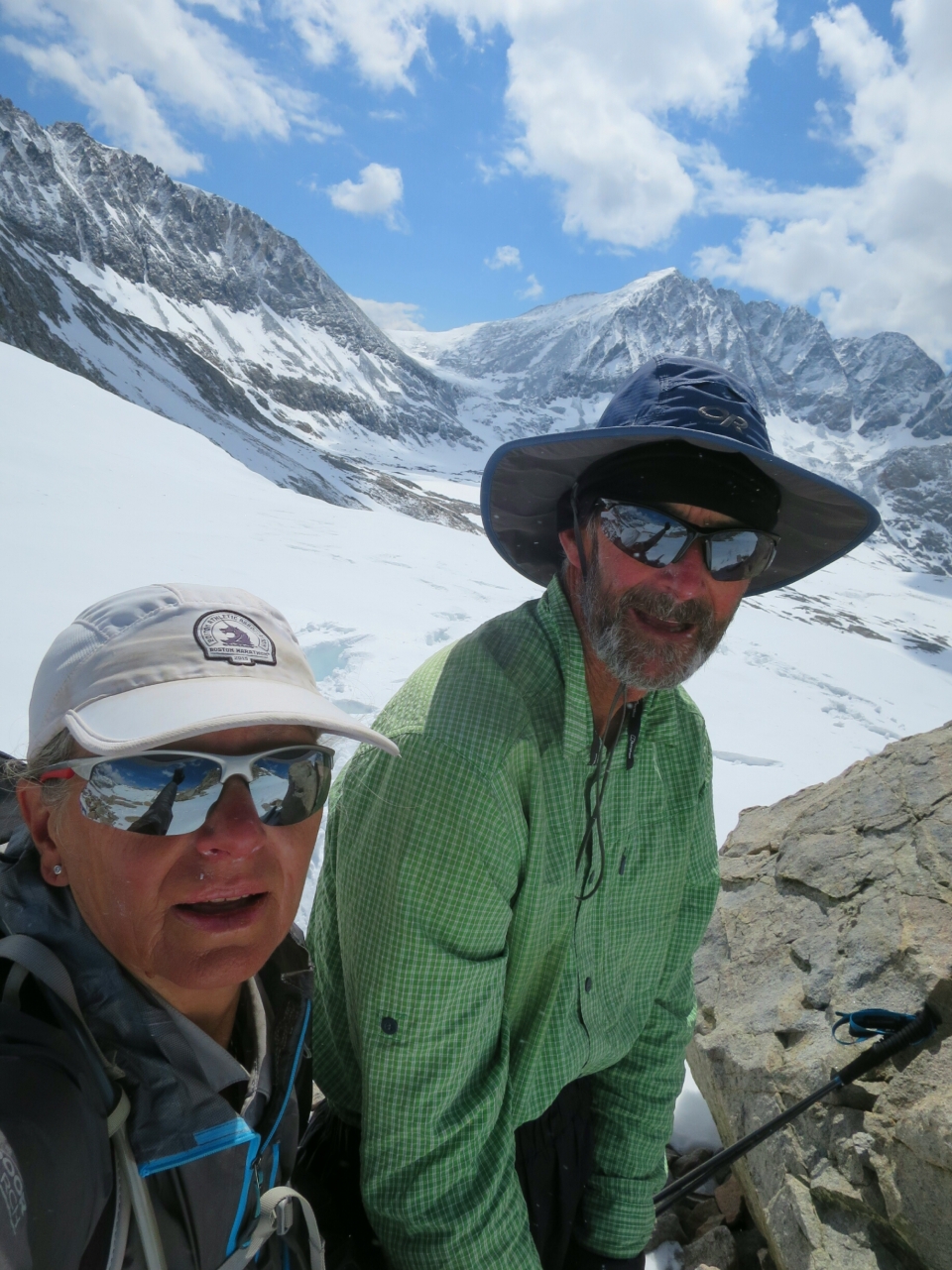 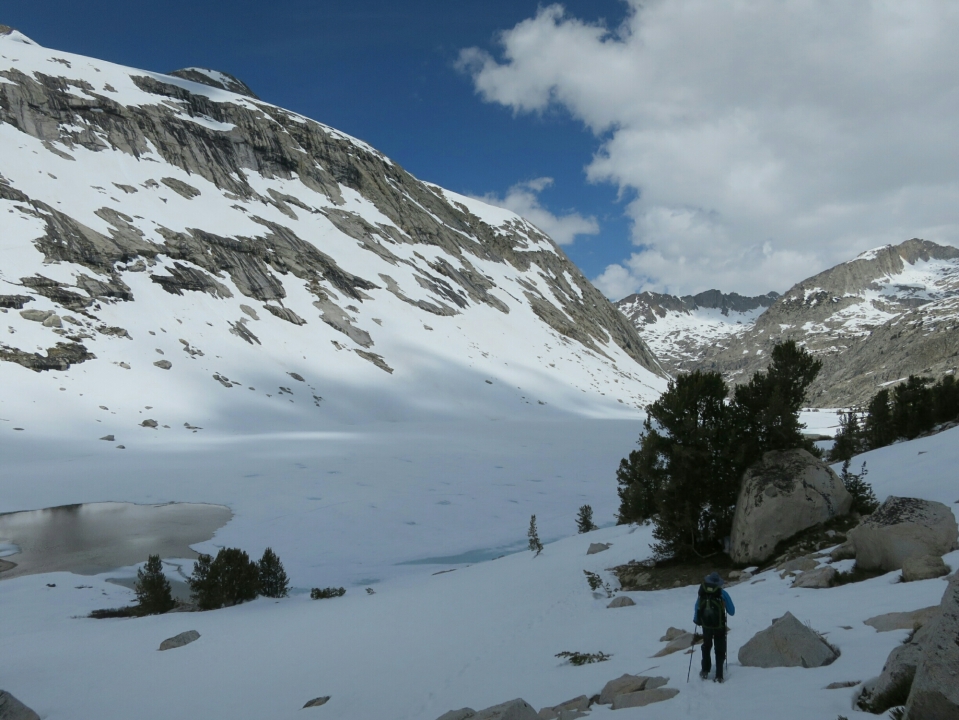 As we got near the crest I could see that two steps have been cut into the ice cornice, giving us a step to get onto the summit. We are feeling especially grateful for the track makers that have gone before us.
The strong gusting wind made it very uncomfortable to spend any time on top and we swiftly started to descent on the other side. It was slow progress as the wind was just as strong on the other side. We were making slow progress as we were in relatively soft snow for most of the morning. It was great to descend down below the lakes and find uncovered sections of the trail.

After coming off Mather Pass we passed into a valley still covered in deep snow and frozen lakes. The descent was steep but not as tricky as that from Glen Pass. One lake flowed into another lower down. They were just beginning to thaw around the edges. The snow was breaking up and as we followed others tracks we ended up finding our selves stranded on a rocky slope with no sign of trail above and frozen lake below. We scrambled over the rocks heading in the general direction of the trail. And presto half an hour later  it was there, perfectly carved into the steep stone slope. It was so well constructed,  it would do a stonemason proud. This was around mile 820,  we stopped from lunch and from here zig zagged our way down a very steep stony canyon eventually reaching the pine forest.

It was absolutely delightful to hike through the forest with so much in bloom and every shade of green imaginable. Spring flowers and mule deer grazing along the path. We saw at least 20 deer before reaching our campsite. We walked along the roar of the Middle Fork Kings River and ended up camping alongside another branch of the river. Enormous amount of water with an enormous sounding energy. The flow seems never ending when you see and listen to it. The snow melt is well and truly underway in this valley. 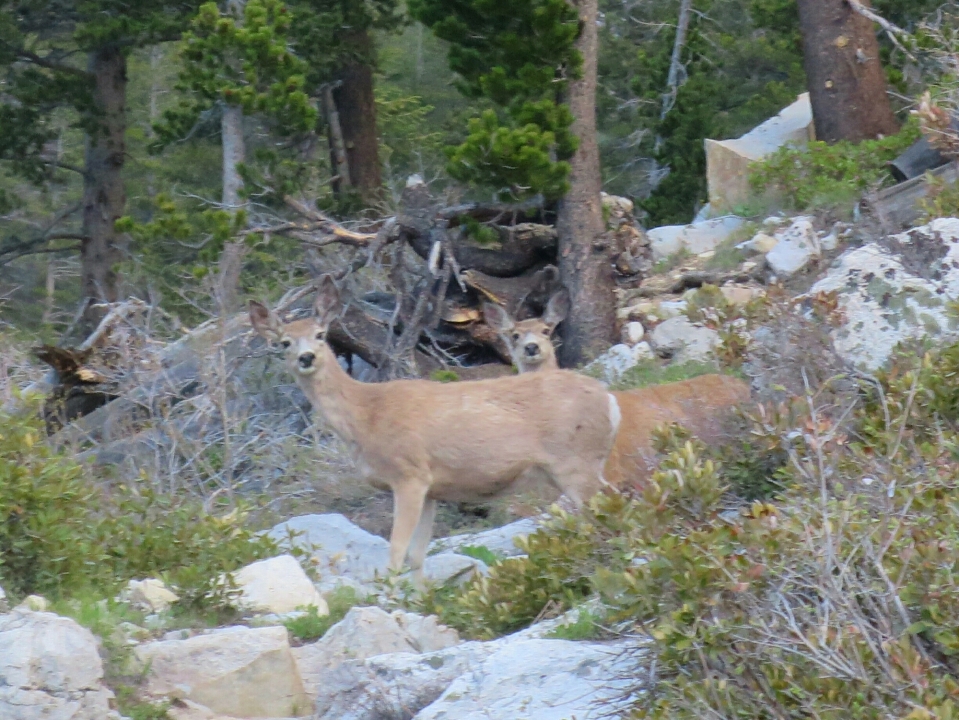 Hammer loved the hike through the pine forest  – called it the enchanted forest. And it felt enchanted after the frozen silence we have had over the past week.  I did not realise how mentally exhausting it has been to hike in snow. It was a joy to spend the afternoon just  hiking, not worrying about navigating or going off trail and getting lost. It feels like maybe our snow hiking has come to an end. Dare I hope this to be true?  Tomorrow we have 6 miles to the summit of Muir Pass, the last of the High Sierra Passes on the PCT.

So nice to finish the day with dry shoes and warm feet. We are camped less then 150 feet away from the river. The sound of the gushing water did not bother us at all. It is so much easier to sleep at lower elevation.