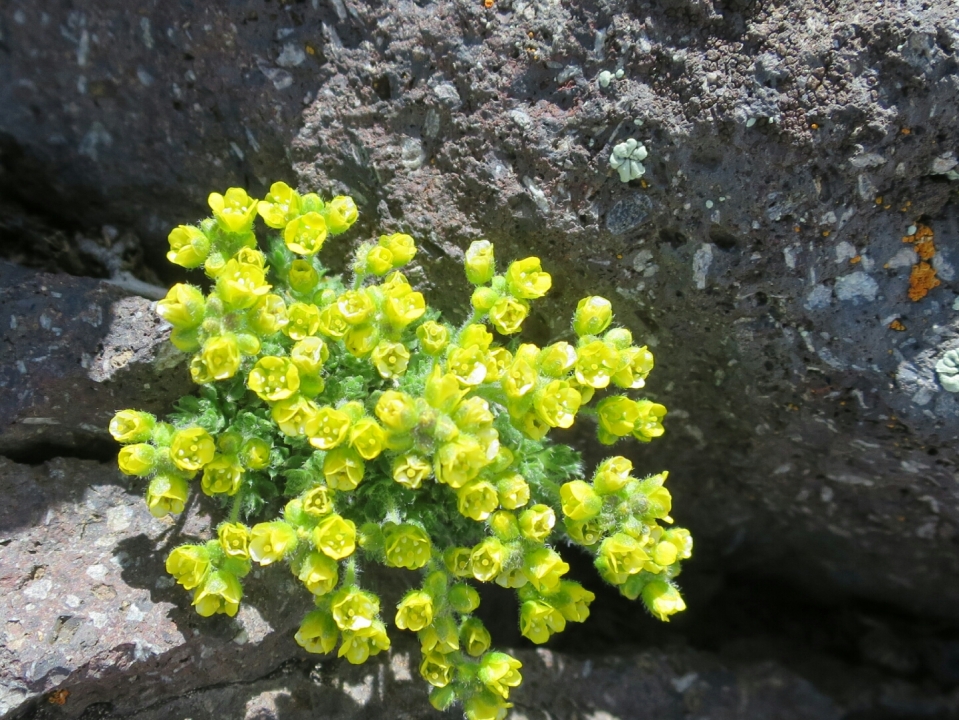 Stunning sunrise this morning. Amazing how everything feels better in the morning, especially when the sun is shining. We were still finishing breakfast when we were passed by 3 hikers. The first one did not see us and the other 2 stopped – D from Switzerland and Dan from North Carolina. They said they’ve been following our footprints for the past few days wandering if they would catch us. They were going into Kennedy Meadows North for a resupply.  They were the first people we have since leaving Tuolomne Meadows.

Great we thought, we can follow their footprints now. This did not work out so well as the snow was deeply pockled and frozen.  They were wearing microspikes which don’t leave much of a footprint. We followed their tracks for a while but then lost them. Hammer looked over to the left of us and could see uncovered sections of trail. We headed over and started to follow this trail. Hammer was certain that we were heading towards an old jeep track which the PCT follows for a little while. He had no map, just  hunch. I checked on Guthook’s and could see we were way off trail. But confirmation bias persisted and Hammer thought that maybe Guthook’s map was wrong. We went around in circles with much fruitless uphill hiking through snow. 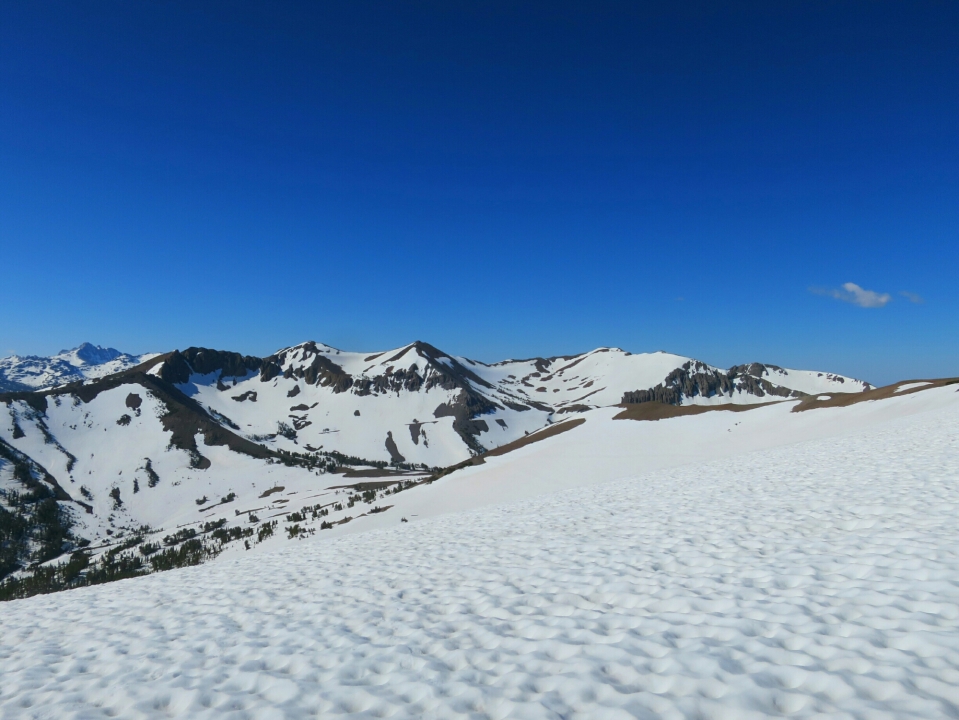 The wrong jeep road on the left

On the right track

Eventually we went back to where we went off trail and got back on track. Such a waste of time and energy. But we learnt a lesson – better and early communication is needed when things get sketchy.

We were in snow for pretty much the rest of the  day apart from a small section of uncovered trail. Once we went over the ridge, which was the highest point since Donohue Pass, we were in this lunar landscape with complete absence of any vegetation. It was so very windy here. Each time we crested a ridge we thought the wind would cease. But it was with us all day long.

Somewhere along here we need to go over the ridge 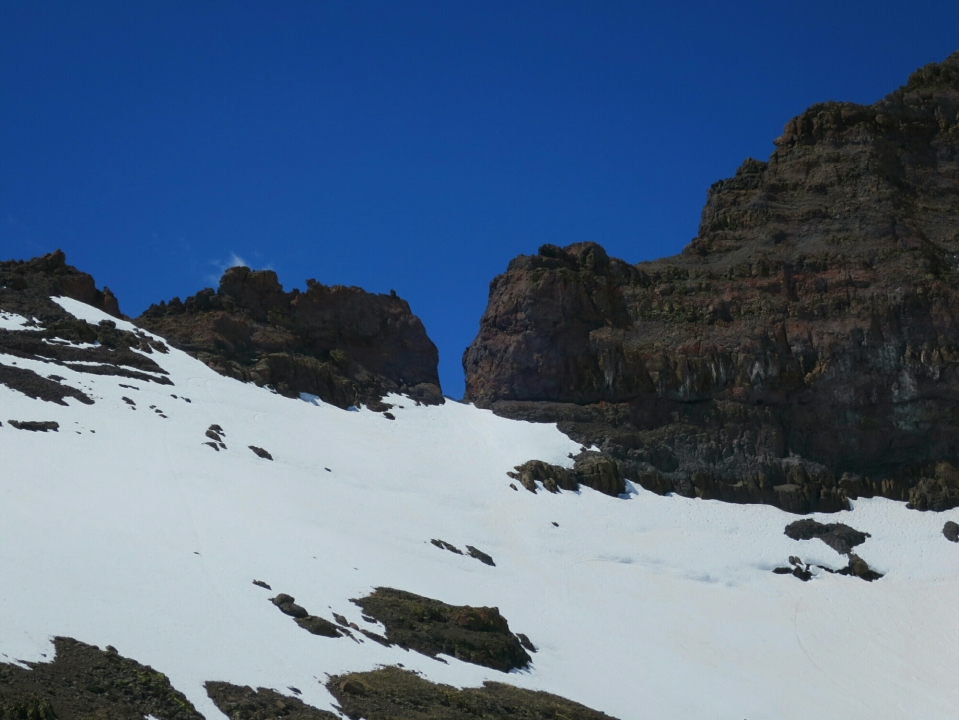 There it is – the gap in the ridge

Navigation here was a real challenge as we would never have picked the slot in this ridge that we needed to pass over.
From high up on the ridge we had views of verdant green valleys below. I was hoping that the PCT would surprise and delight by taking us down into this green lushness. But it was not to be. We stayed high winding around several more ridges before starting the descent to Sonora Pass. The snow was deep and we were crossing along steep slopes before we finally reached the road at Sonora Pass. 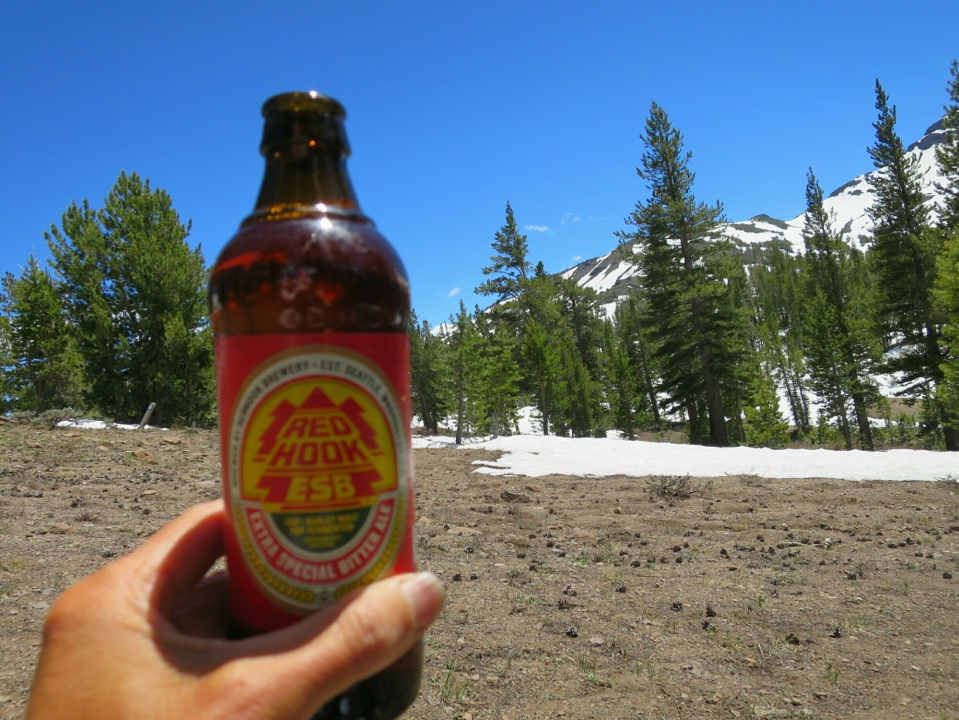 Another great milestone and to celebrate some lovely Trail Angel has left 2 beers cooling in the snow.  We stopped here for lunch, washed down with the delicious Seattle brew. As we were finishing a lady out for a day walk with her dog stopped by and offered us food. She offered to take all our rubbish as well.  Susan was from San Francisco and was staying at Kennedy Meadows North. She told us about the tragic shooting in Florida – it sent shivers up my spine. Sometimes we may be safer in the wilderness.

From Sonora we ascended again in deep snow. Our navigation was made so much easier by fresh footprints left by 2 hikers who Susan told us had left Sonora just before us. We had several creek crossings, which were not overly difficult but we still got wet feet.  We were happy with our progress today despite starting out the day being completely navigationally challenged.

← BRIDGE TO HAPPINESS
A WALK THROUGH TIME →