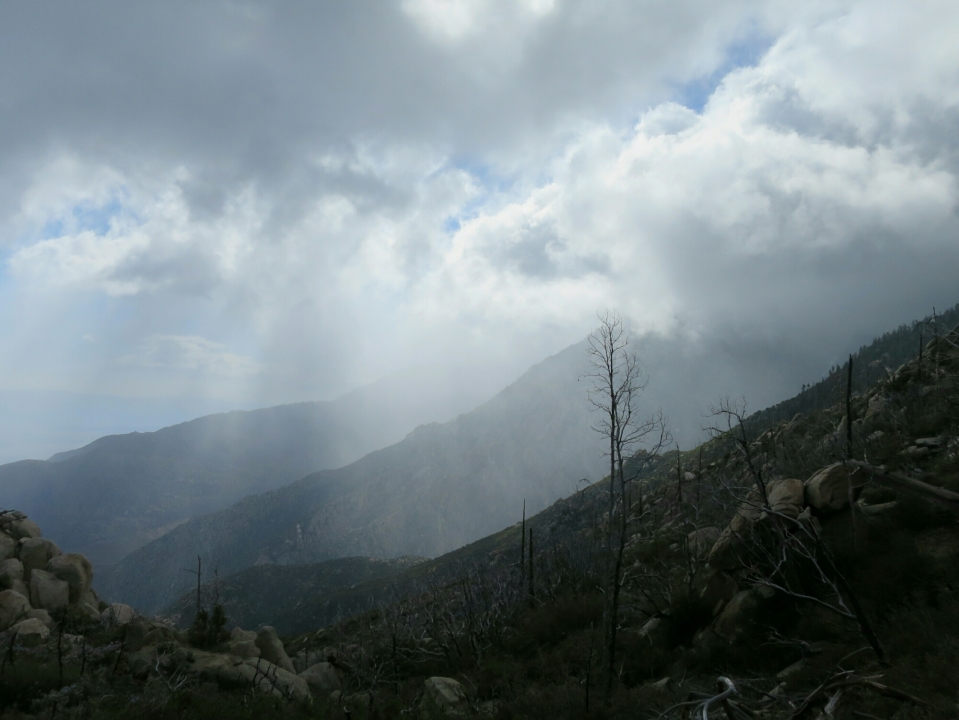 Well, we are so confused about this crazy weather.  This morning we woke to a tent covered in very fine hail. Remarkably, for such a windy night, we both slept really well. Except that Hammer had to get up twice to resecure the rainfly vestibules which were being blown against the tent.

It was so cozy inside the tent that I really did not want to go out and face that raging wind again. I suggested that maybe we can wait for the storm to pass. Hammer was having none of that. We were camped at 7000 feet altitude and chances are the storm would hang around. So reluctantly  I packed up and once I got outside the tent I realised it was not so bad really. A little pile of hailstones had built up around the footprint of the tent. We were still in disbelief over walking through so much snow yesterday and today just added to our confusion. We were baking in the desert only two days ago. 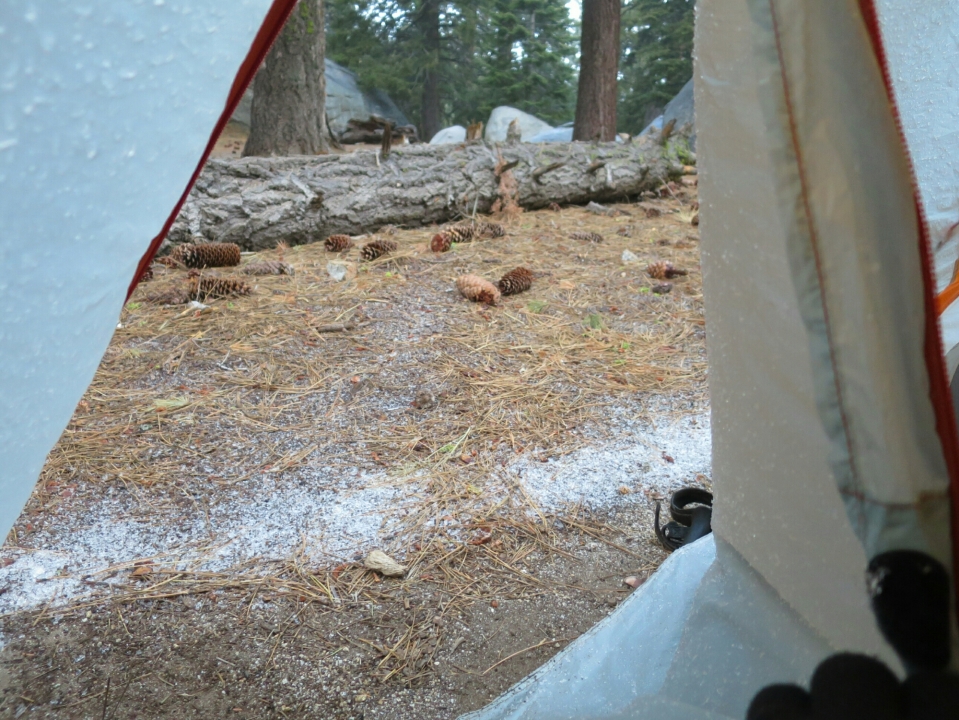 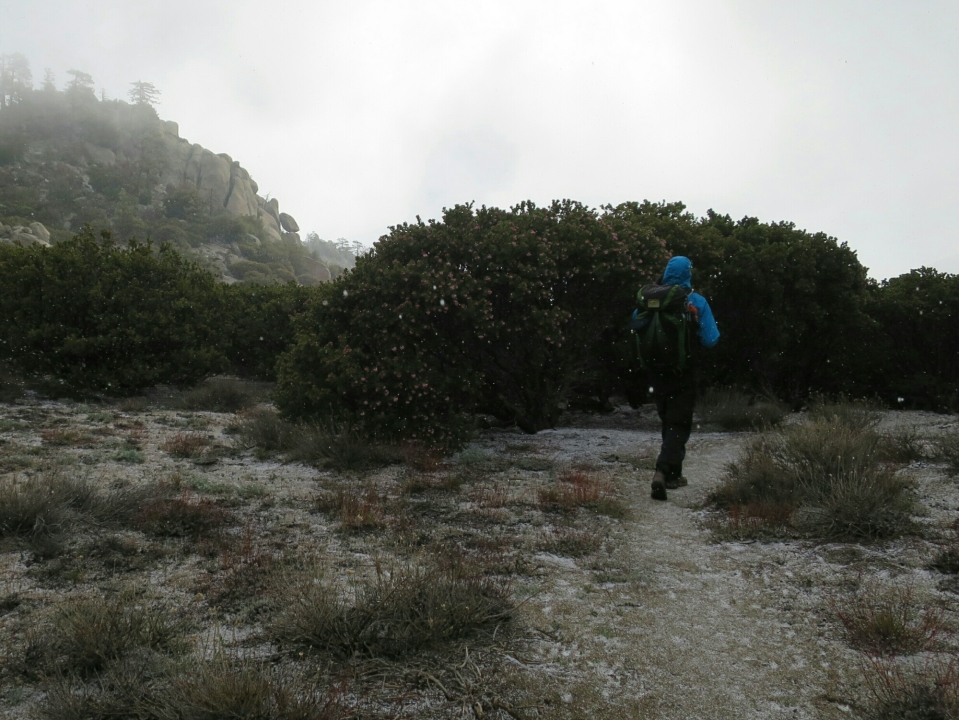 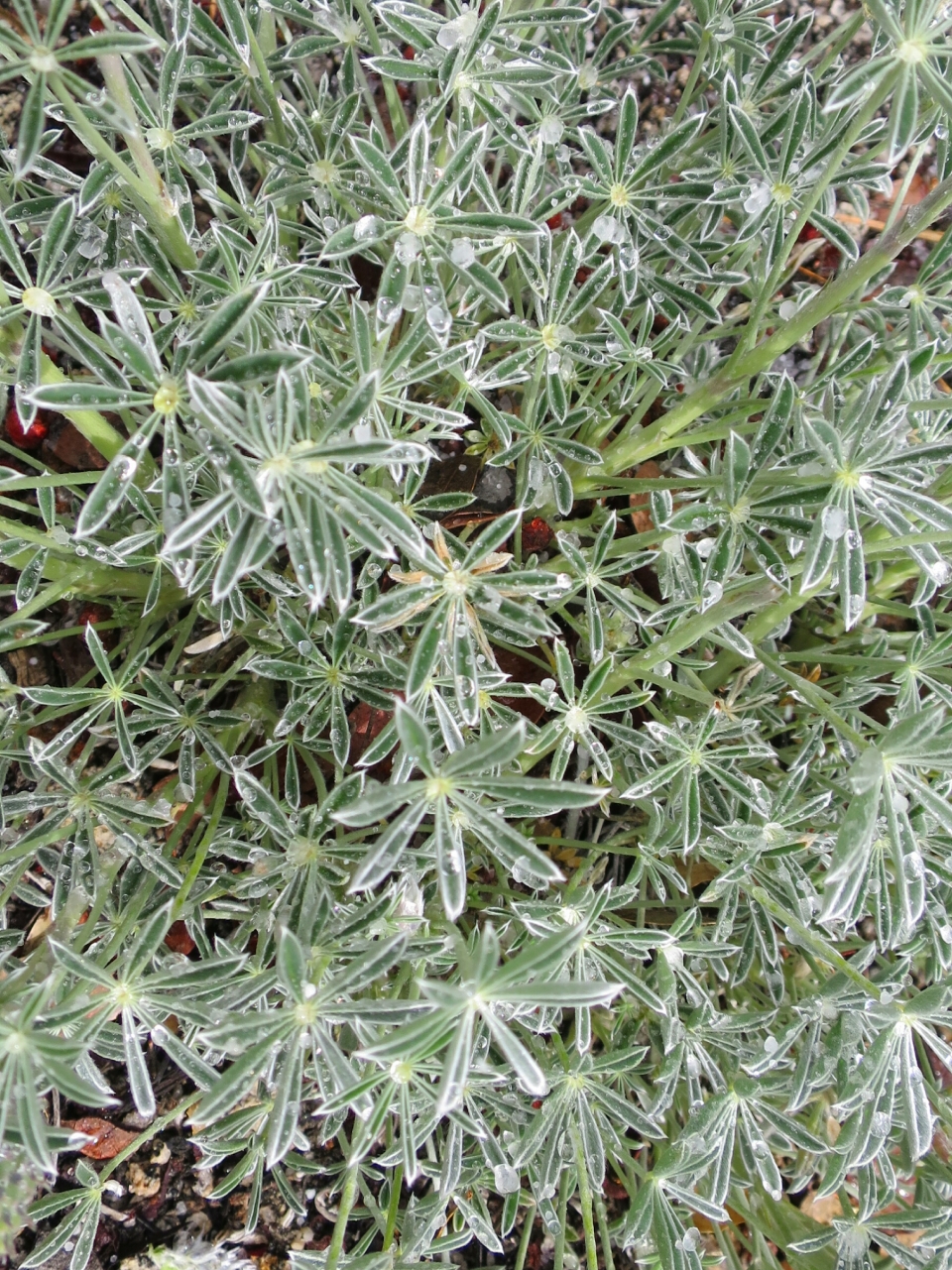 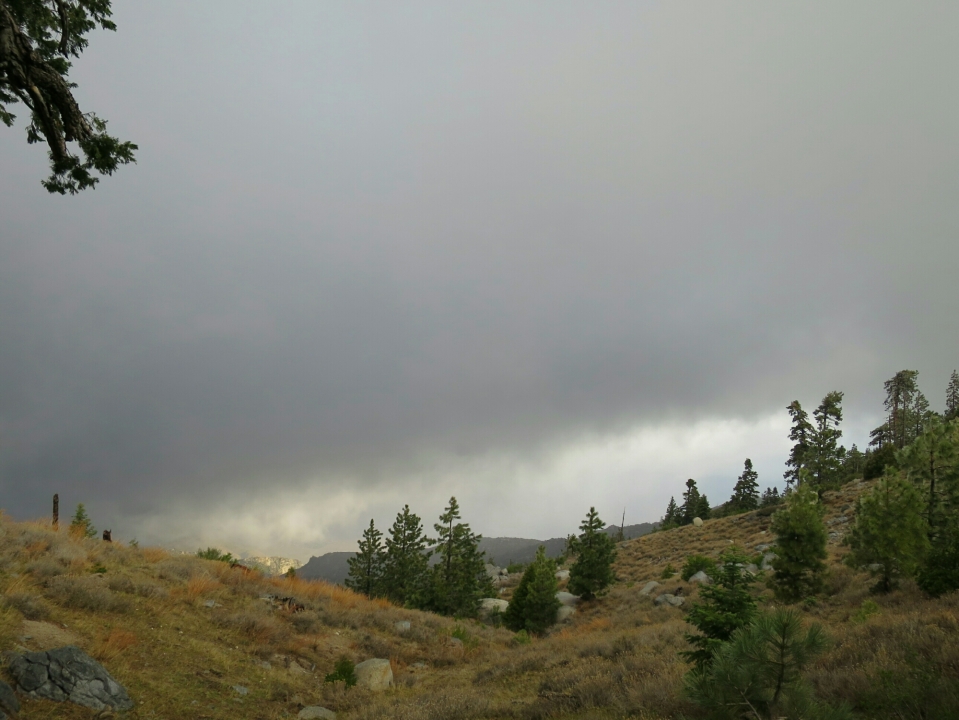 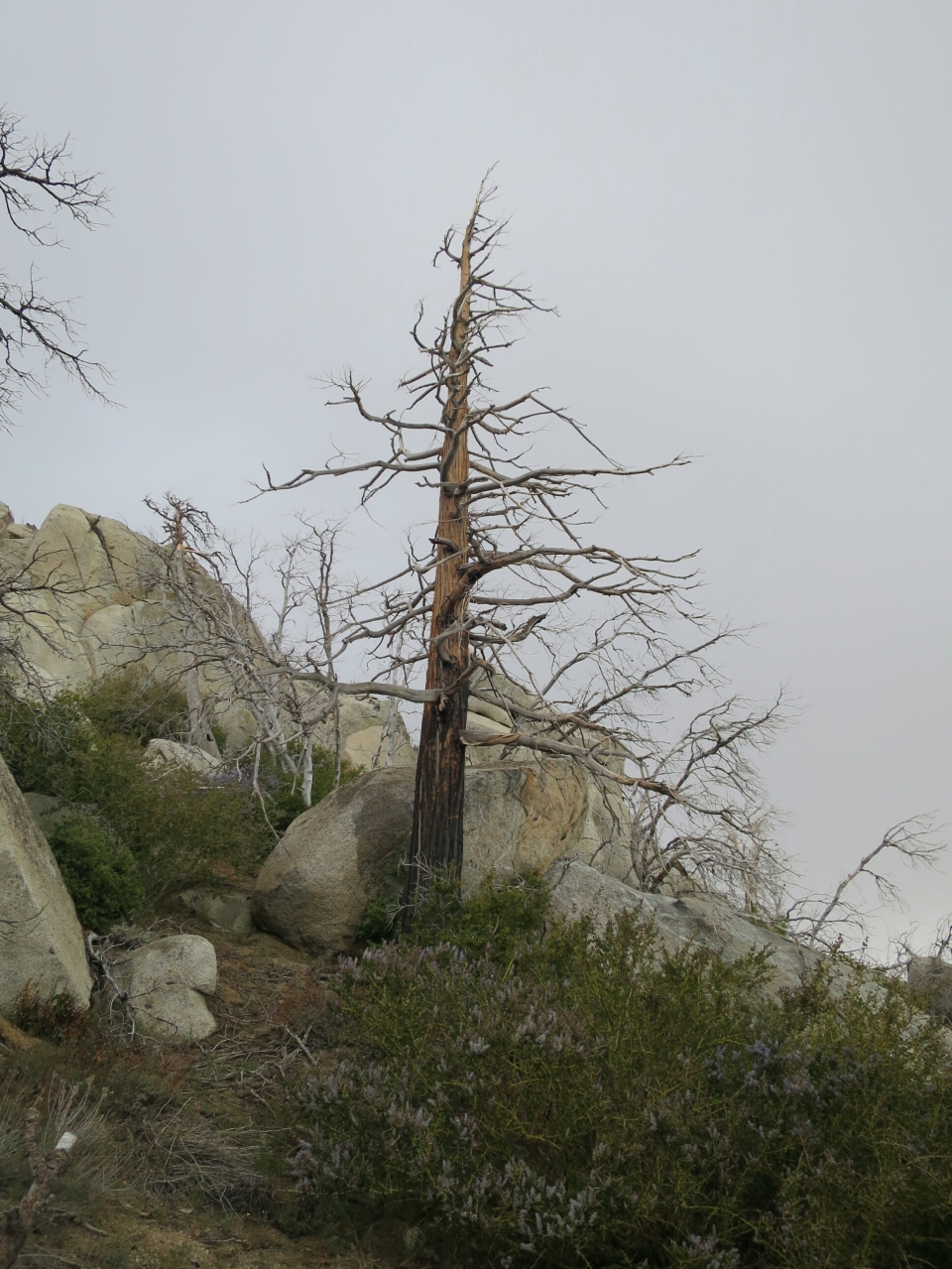 The hail followed us off the mountain for a couple of hours. Once we were out of the pine forest zone, the hail  turned to rain. Eventually the rain eased off but the wind never let up. In fact,  it stayed with us throughout the day. I guess this is usually a windy area, which would explain the huge numbers of wind turbines in the floor of the valley.  The clouds looked so dramatic with an occasional peak of the sun breaking through. As we descended closer to the desert floor the sunny breaks became more frequent. But there were dark  clouds on the horizon to the west. 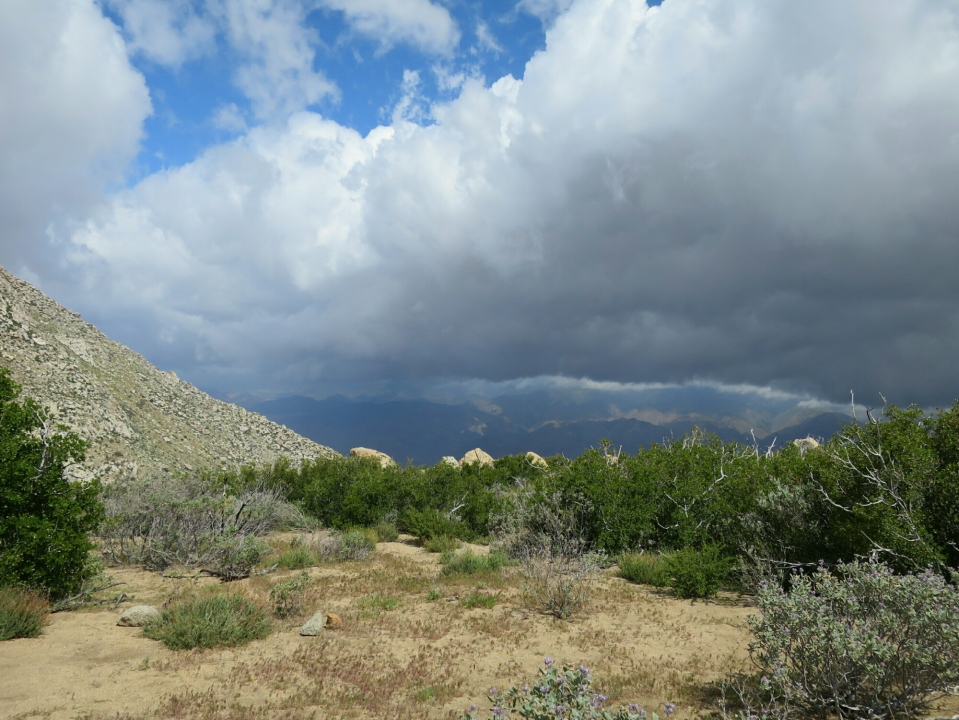 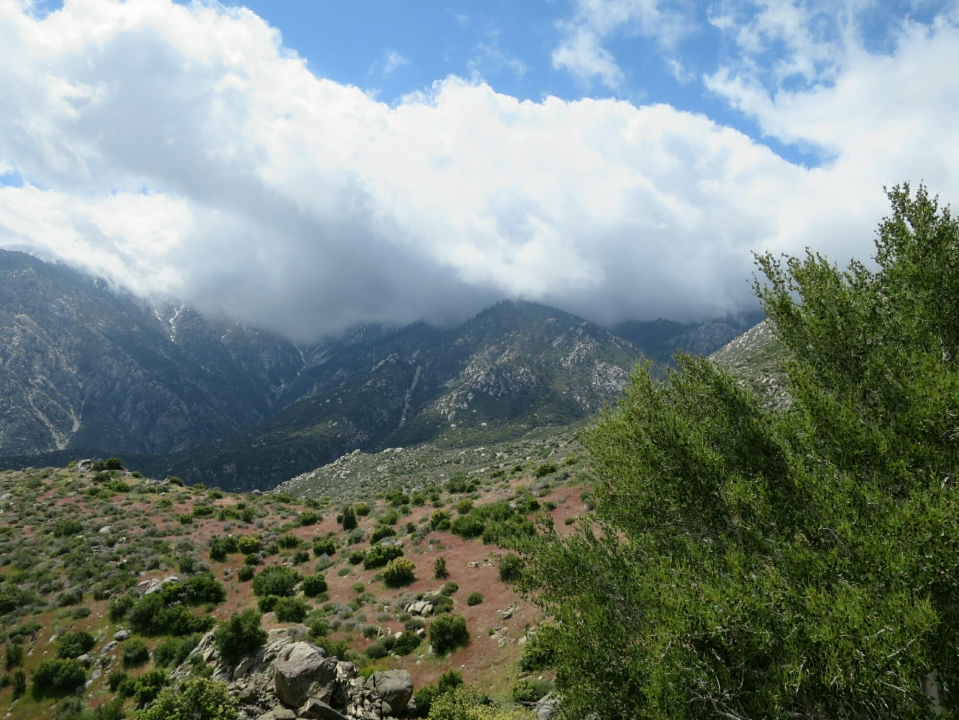 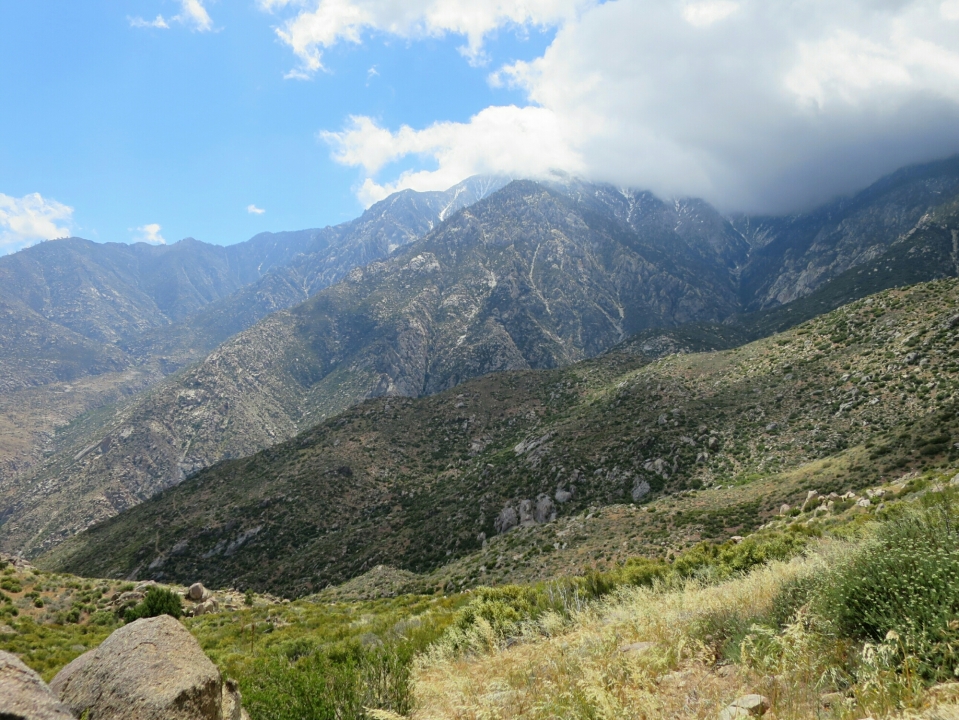 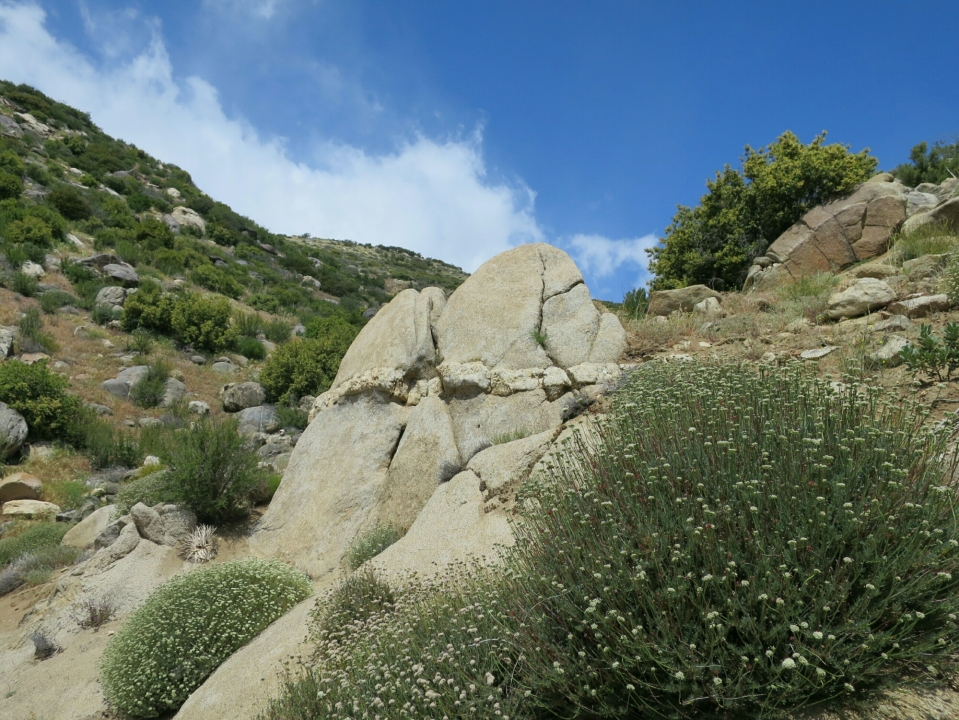 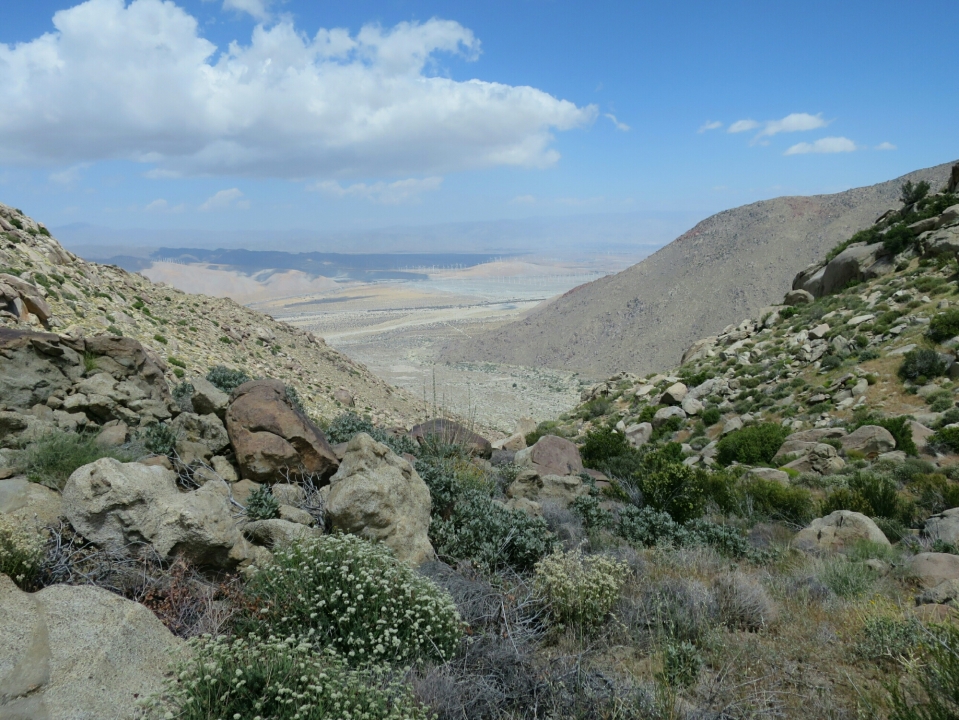 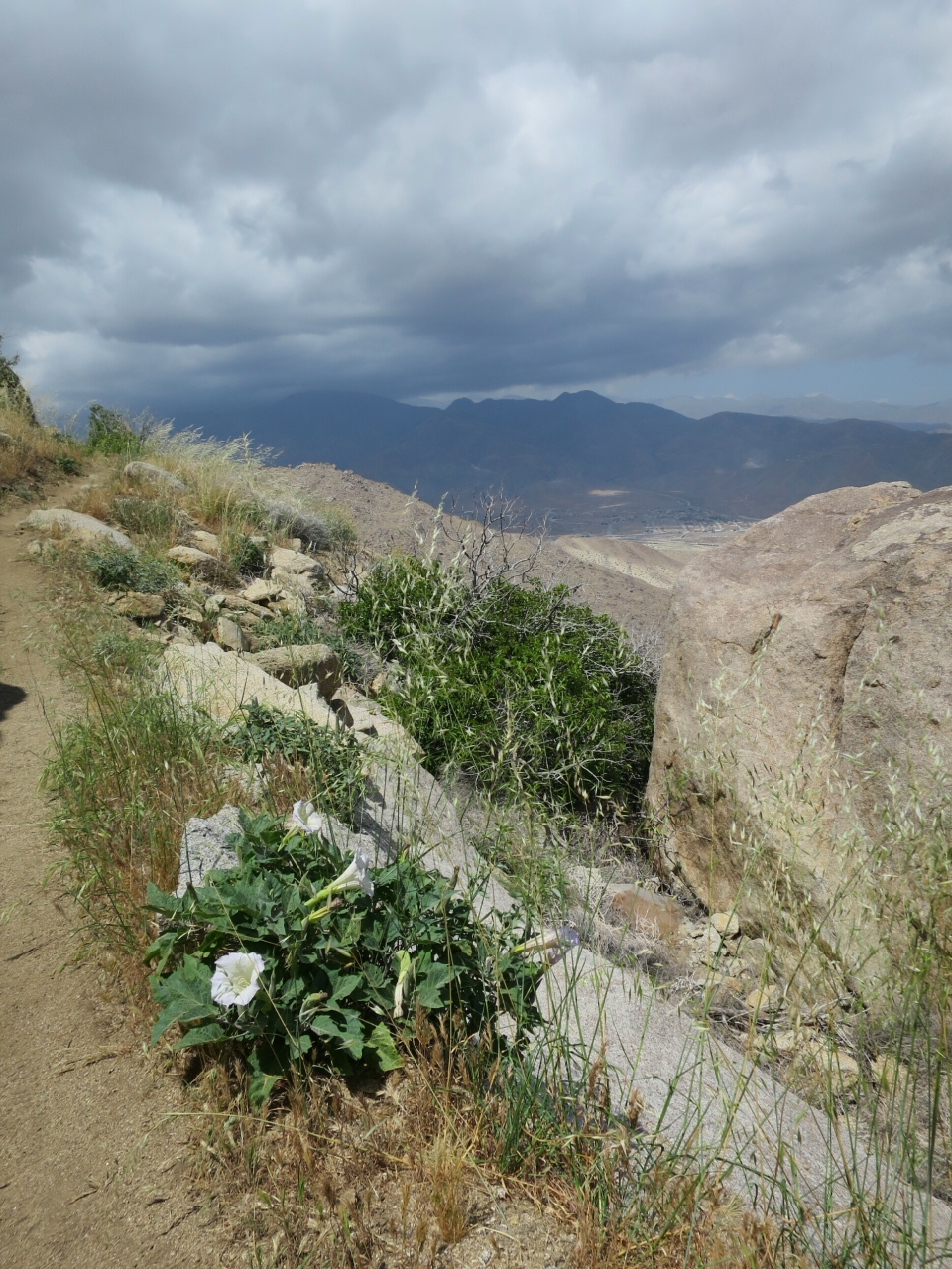 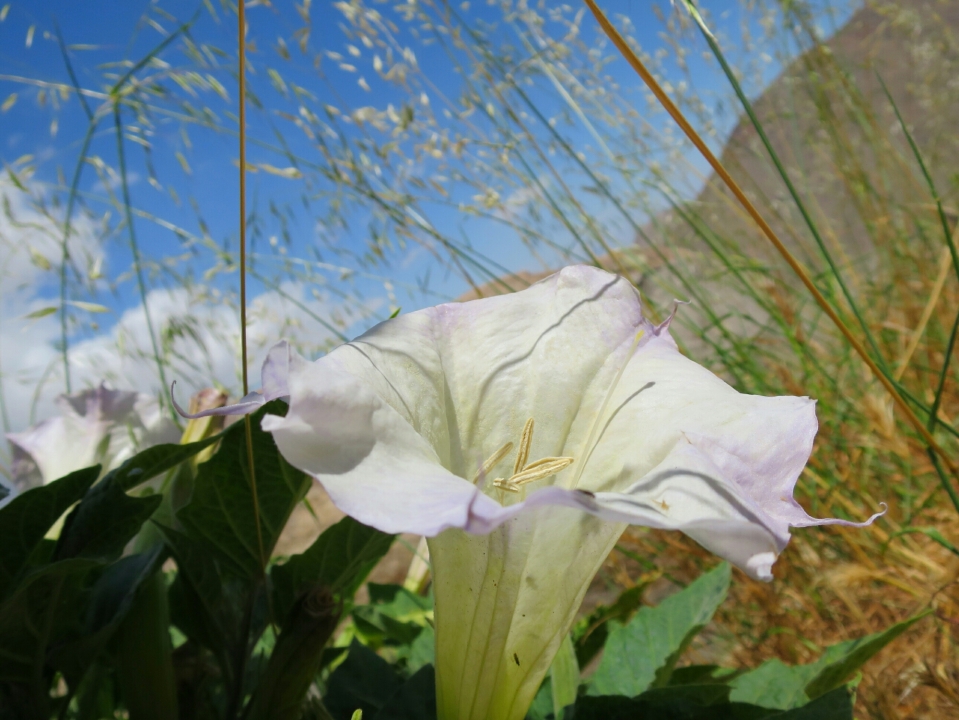 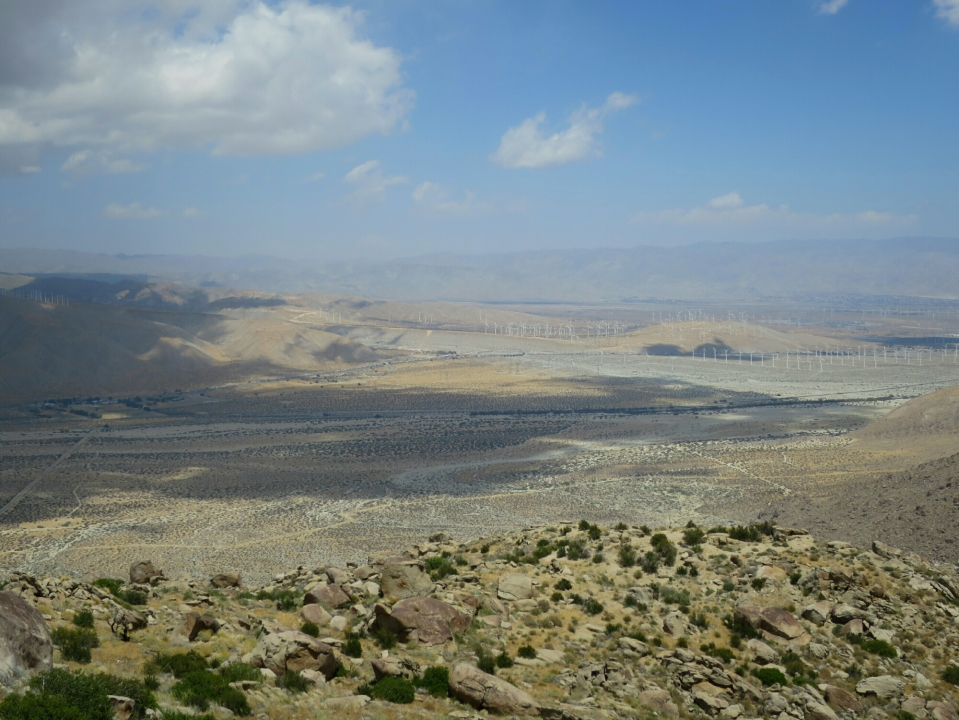 Very late in the afternoon we crossed under the very busy Interstate-10 and soon arrived at the famous Trail Angels house “Ziggy and the Bear” in Whitewater. Within half an hour of arriving, those dark clouds we watched, as we descended down the mountain, opened up and dumped a tonne of hail and rain which flooded their backyard. We were planning on staying the night at Ziggy and the Bears but with the wet and cold conditions there was no alternative but to find a motel nearby.  Jack Rabbit, another Trail Angel helping hikers at the house, gave us and an English family hiking with their two kids, a lift to a motel in Banning. 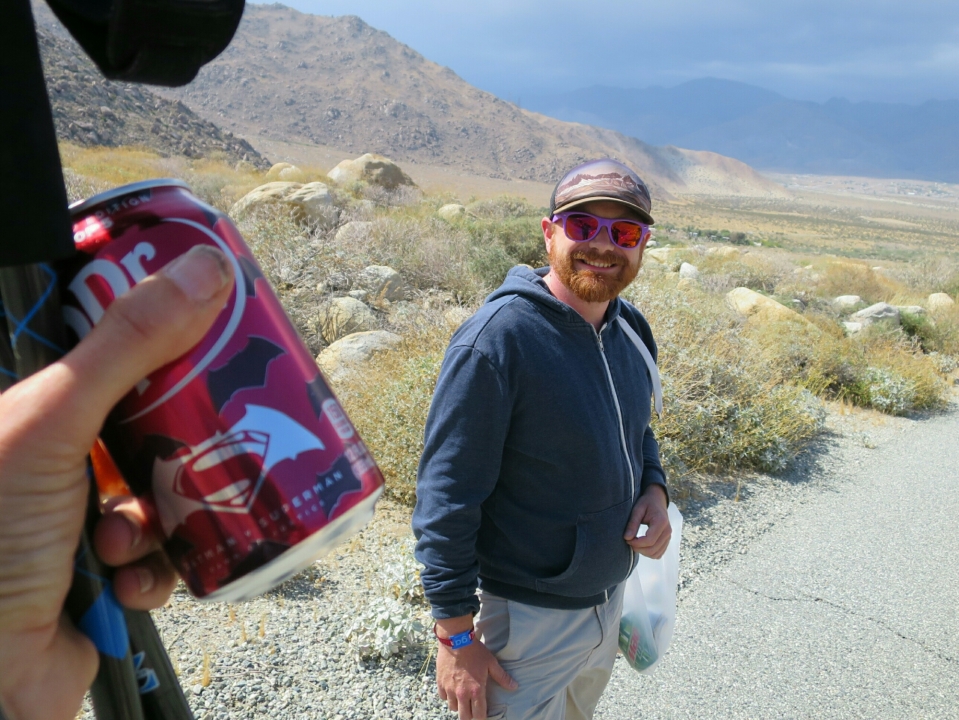 Trail Angel “Shades” – thru hiked last year, now paying forward by helping others. Thank you for the drinks and a mandarin. 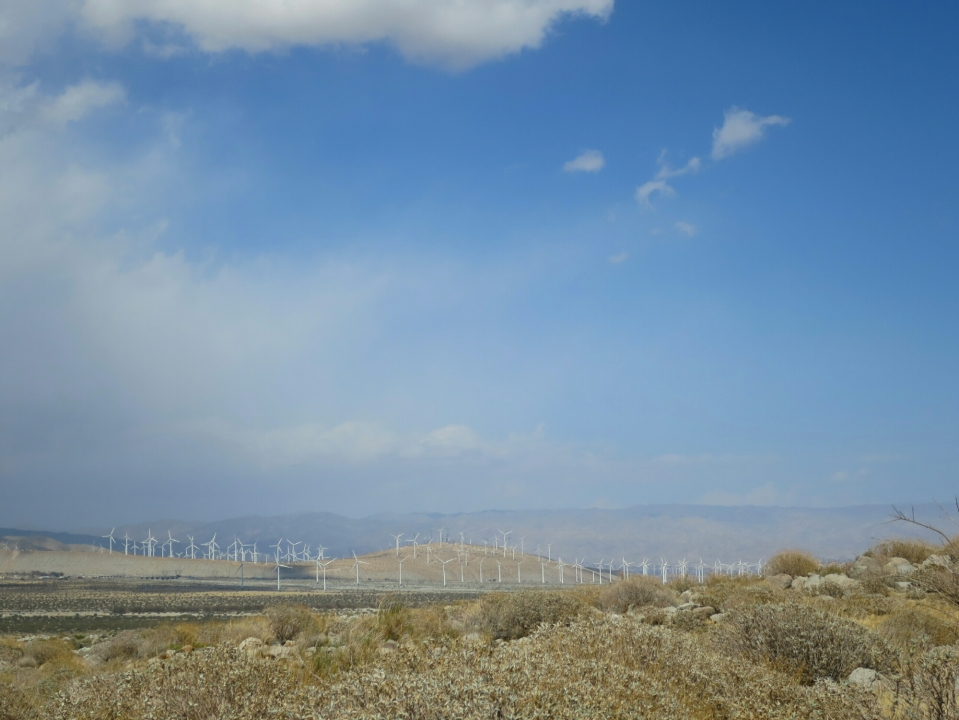 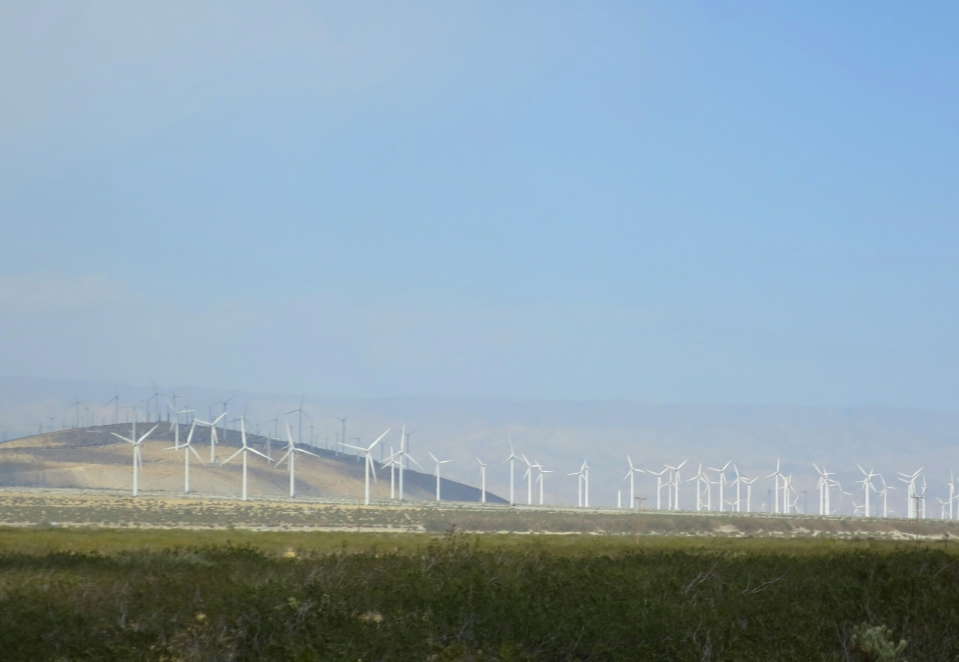 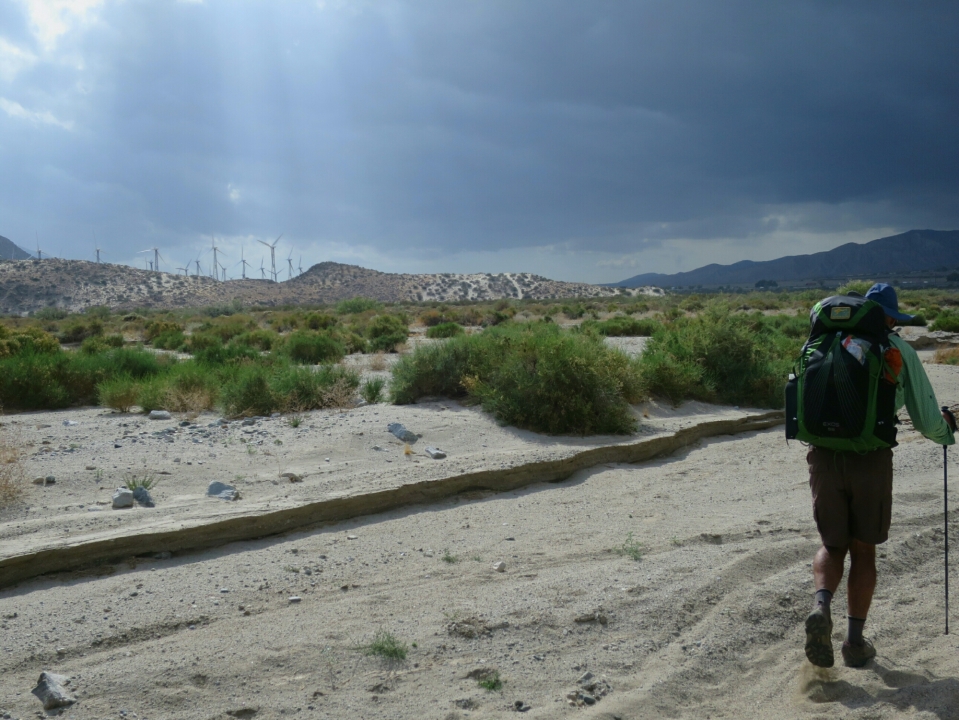 Almost at the I-10 underpass. 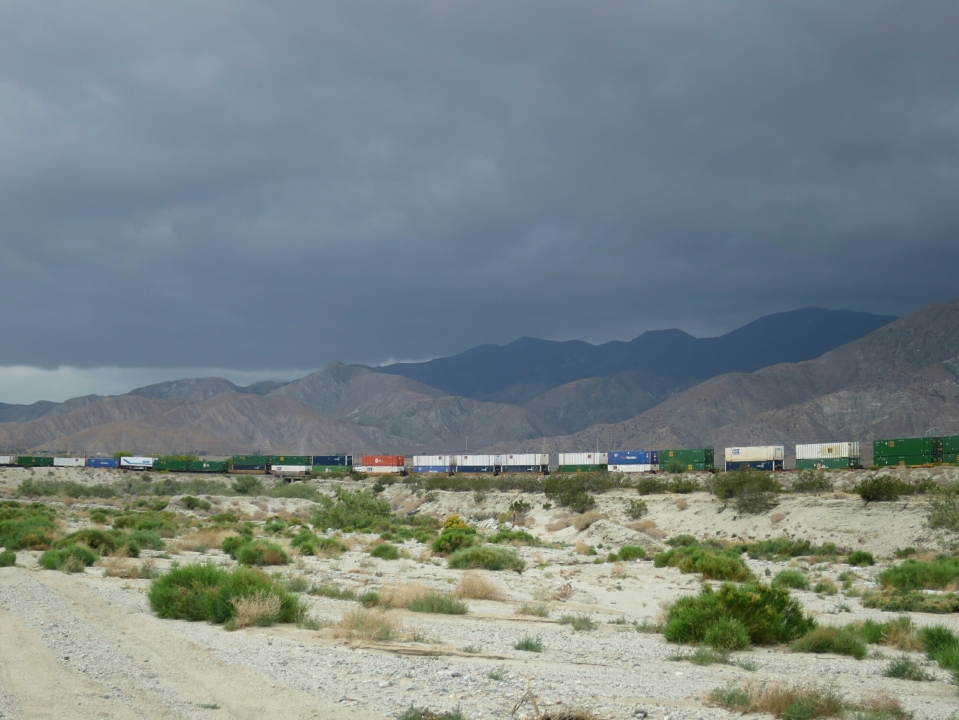 Very busy freight train line along the I-10. 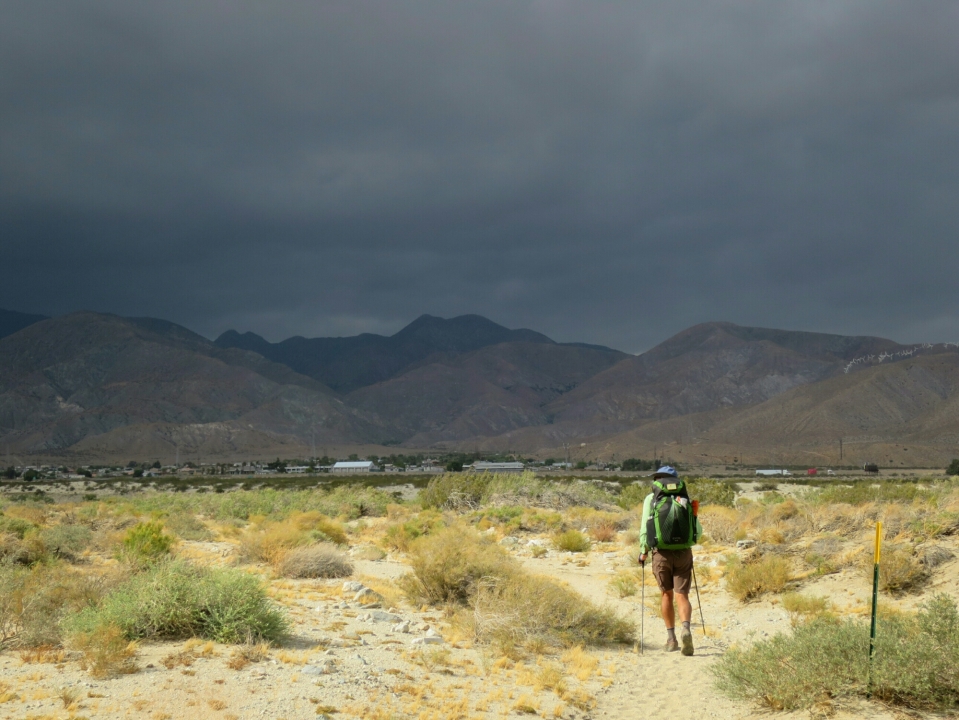 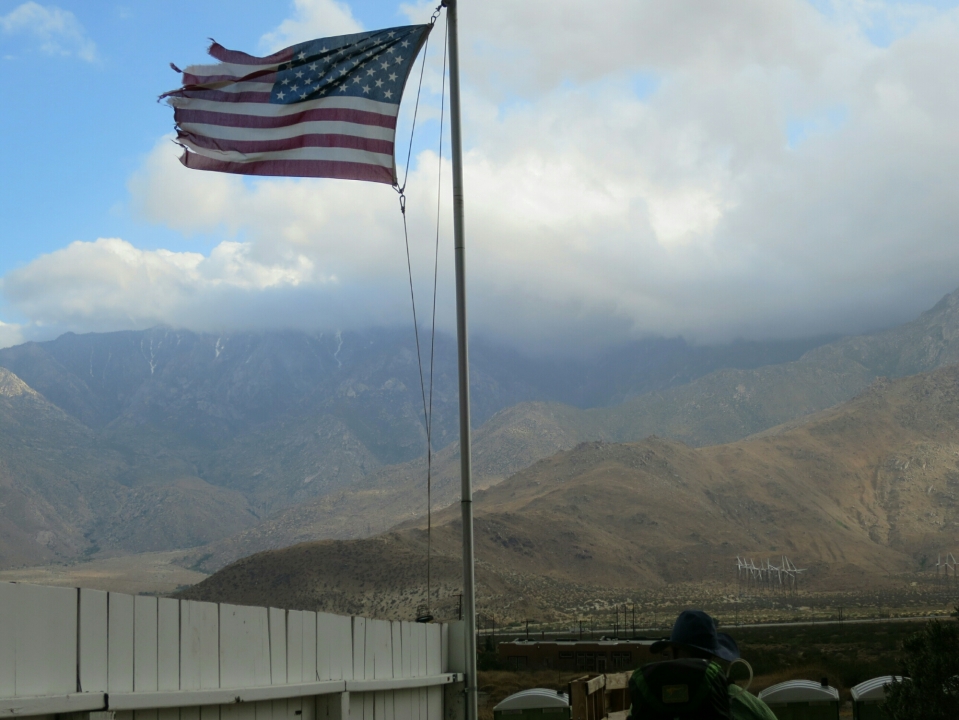 Finally at the famous Ziggy and the Bear house 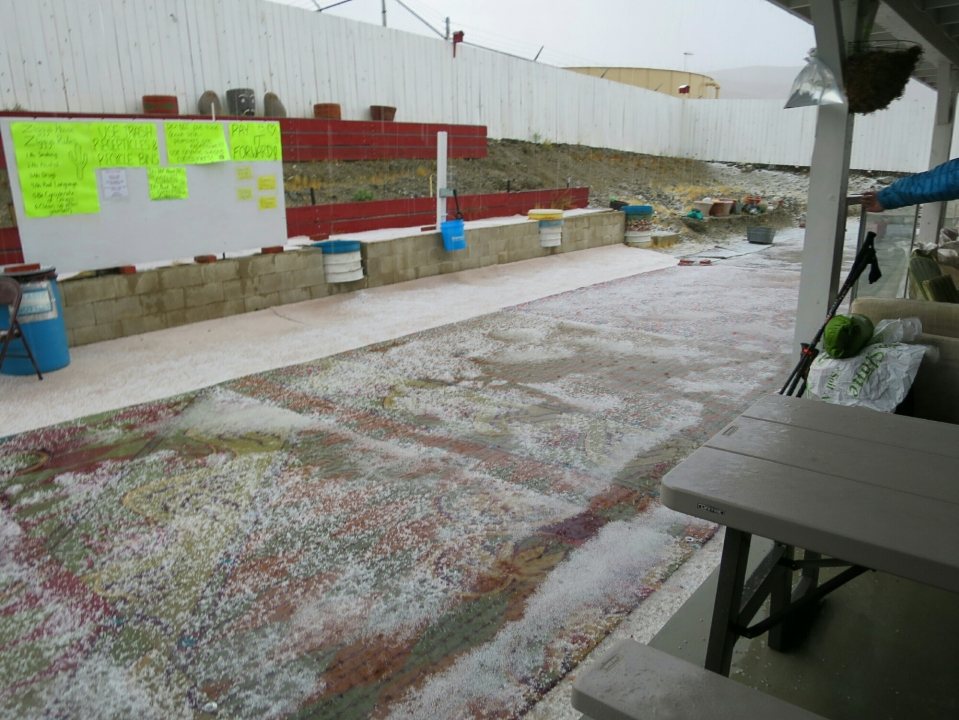 Ziggy and the Bears, backyard during the hail storm

← MOUNT SAN JACINTO PEAK
WE’RE ALL IN THIS TOGETHER →