Got My New York On 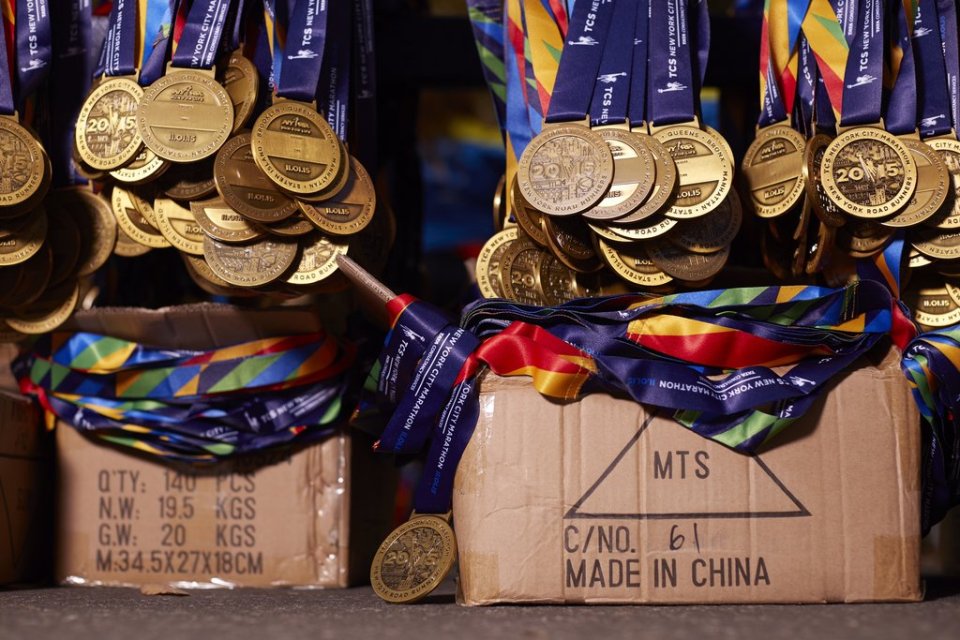 What an event, what a day and  I finished. I still can’t believe it. I certainly had a lot to be worried about. It was probably the least prepared I have ever been for a marathon. Ongoing problem with a torn calf muscle and inflamed achillies and just as it was all settling down and I was starting to increase the distance, a death in the family put a halt to all running. At a time of  personal loss and grieving, keeping to a training program did not seem all that important.  And I am going through a trial of going off all treatment to see how the body responds.
So 4 weeks out from the marathon I found  a 4 week training program. It assumes that you’ve done some 15 to 20km runs recently.  I struggled to do the long runs in the program. The longest run I ended up doing was 22km and I was slow and labouring on every run.  I enjoyed the shorter speedier sessions but I now know that I just did not have enough time to build up the stamina to do the long runs. Another 4 weeks would have been handy.  But life dishes out what it will and you just have to make the best of it. As aresult I am not sure how much of the aches and pains I am experiencing are due to being off treatment and how much is due to accelerated training.
So I arrived in New York on Tuesday, spent a couple of days walking around taking in the magnificent colours of Central Park and the Halloween decorations on houses. It was cold on most days, with biting wind.
Expo on Thursday to pick up my race number was overwhelming.  The race merchandising was huge. The Asics stand took almost a third of the pavilion. And as the day progressed the line to the cash register jut grew. Friends who went on Friday, said the line was almost a kilometre.  The rest of the expo was pretty much like Boston.
Race day was approaching and I was strangely calm. I guess I did not really have any expectations, except to finish. Race morning, I met another Strider and we got the subway to the Staten Island ferry. From the ferry to race village was a bus trip. All up from leaving the hotel at 6.20am to arriving at the race village took almost 3 hours. By the time we arrived it was time to go into the starting corrals.  My race started at 10.40. Race numbers were around 50,000 entrants and the movement of so many people was very orderly and appeared to work without a hitch.
Did not spend too long at the race village before it was time to head to the corrals and get final preparation done. Lining up in my wave we were lead to the start line by a line of soldiers with linked arms. I guess to prevent surging to the front. They stood there until just after the anthem was sung, we were facing the Verezanno Bridge and the first big uphill. The gun was fired and we were off. 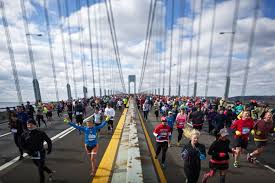 I found myself running with ease at 5.30-5.35 pace and I knew this was quick for me especially going uphill. But I just could not slow down. I ran at sub 6.00min pace, which was my target, for most of the first 15 or so kilometres.  I slowed a little on the undulations which were quite sneaky.  You don’t realise you are going uphill until the inexplicable laboured breathing.  I found the conditions a little bit too warm. I was expecting colder weather. The crowd support was phenomenal.I had my name printed on my chest and to hear your name called out with words of support was so uplifting.  I got to halfway feeling OK in a time of 2:04. I realised that a Boston qualifier was a fools dream with such limited preparation. And I don’t know if it was this acknowledgement but soon after I let thoughts of all the painful spots in my body seep into the present my running race was over and by 27km I was starting to walk. This also coincided with the awful Queensboro Bridge that leads to Manhattan. This bridge, with no supporters allowed, seemed to go on forever and seemingly all uphill. There was short downhill, an offramp from the bridge which leads to Manhattan. And as soon we turned the corner the crowds and cheering were off the scale. I get goosebumps even now when I think about what a lift that gave me. 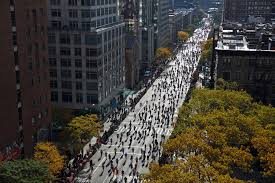 From here it was a walk 100m/run 400m stratagy. When that got too hard, I would walk 200/run  300m. I ran all the downhills. And so I reached Central Park and the final turn into the finishing shute. I still can’t believe I made it. I crossed the finish line  in 4:29:58 and just like in Boston, as soon as stopped running i had trouble breathing and was crying. Tears of joy and relief.  It took another hour after crossing the finish line to get out of the athletes area, wearing my poncho. And then it was another hour walk to my hotel.