Sunday June 27, 2010
Well as it turnout out it was Warriewood to Inglewood, the location of Los Angeles airport. We left Sydney on a clear blue sky winters day. A walk along the beach in the morning and the ocean was sparkling as it always seems to when you are about to leave. 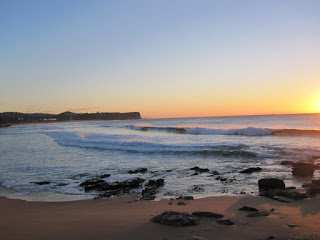 It makes me sad to be leaving but always a great image to think about to make me a little bit homesick while away. So after months of planning and years of talking about this trip we were finally off. First leg was fine, we got to Nadi and found our connection to Los Angeles was delayed. You can guess the rest. So rather then a comfy hotel room in Seattle to get over the jetlag we were waiting around LA airport hoping to get on a later flight. No luck so 5 hours after arriving in LA we found ourselves staying overnight. We were prepared for some setbacks – just not on day one. So in summary:

THE GOOD: We had lots of room on the plane and could stretch out to sleep on the longest leg from Nadi to LA. THE BAD: A 16 hour trip ended up being close to 48 hours by the time we got to Seattle the next day. THE UGLY: Inglewood – enough said.