While in Cascade Locks  I  stayed at the Cascade Gorge Inn. A nice place with clean rooms and comfortable beds. Although the outside of the building looks like it has seen better days.  Last night being Friday,  my neighbours came back to their room sometime around midnigh and decided to have a fight outside my door. A lot of f… words were hurled at each other,  something about car keys.  Eventually the swearing and yelling stopped and was replaced by reving engine noise. They seemed like such nice people when I saw them earlier in the day. Eventually the fight was over and  I could get back to sleep. I was itching to get back on trail.

It was a warm morning when I left Cascade Locks at 9am.  Being at the lowest point on the PCT there is only one way out and that is up and up. The trail rises 3,500ft over  the first 12 miles in Washington.  But first I had to cross the Bridge of the Gods. I’ve seen pictures of people walking across the bridge so I knew what to expect.   Yet it still  unnerved me to walk over a bridge with no pedestrian path.  And even more unnerving was the steel grate which forms the platform, through which you can see the river flowing below. I clung my hiking poles and camera close to my chest and without looking down slowly made my way across. Surprising how curteous the drivers were.   I waved a thank you to each one as they went past me.  And halfway across the bridge,  Washington section of the PCT bagan. 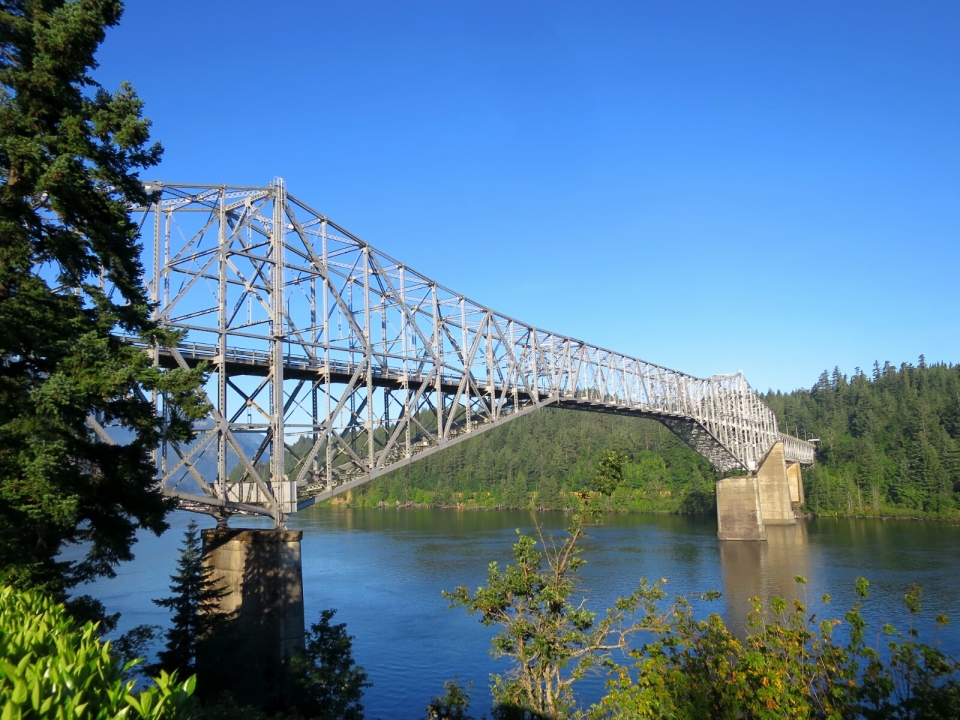 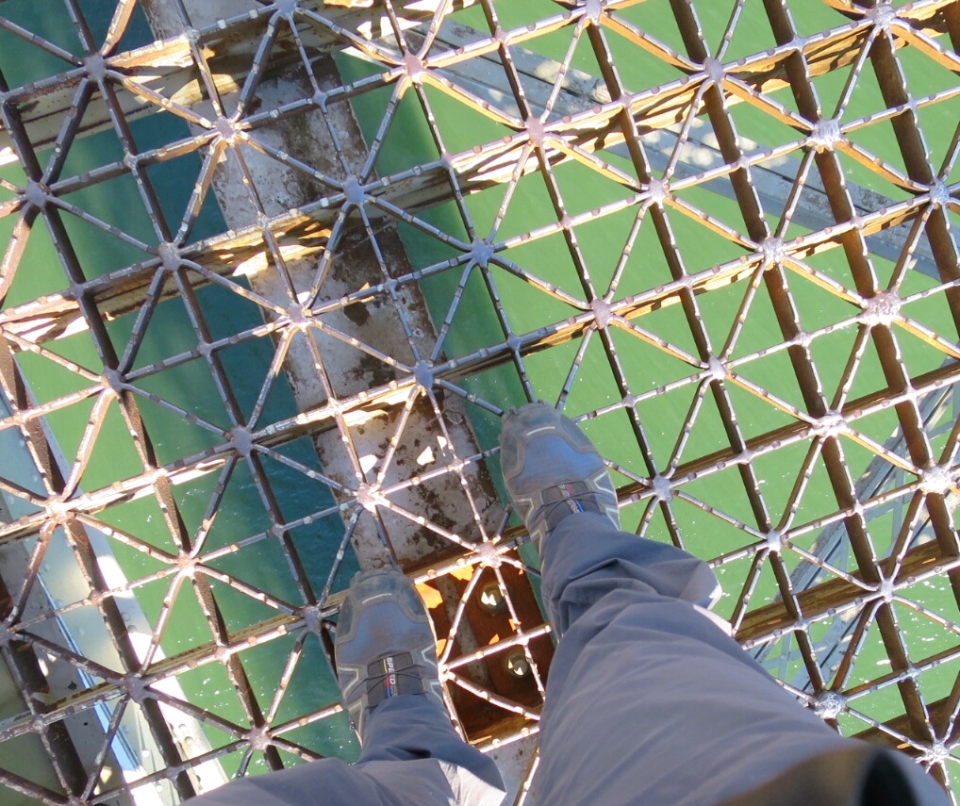 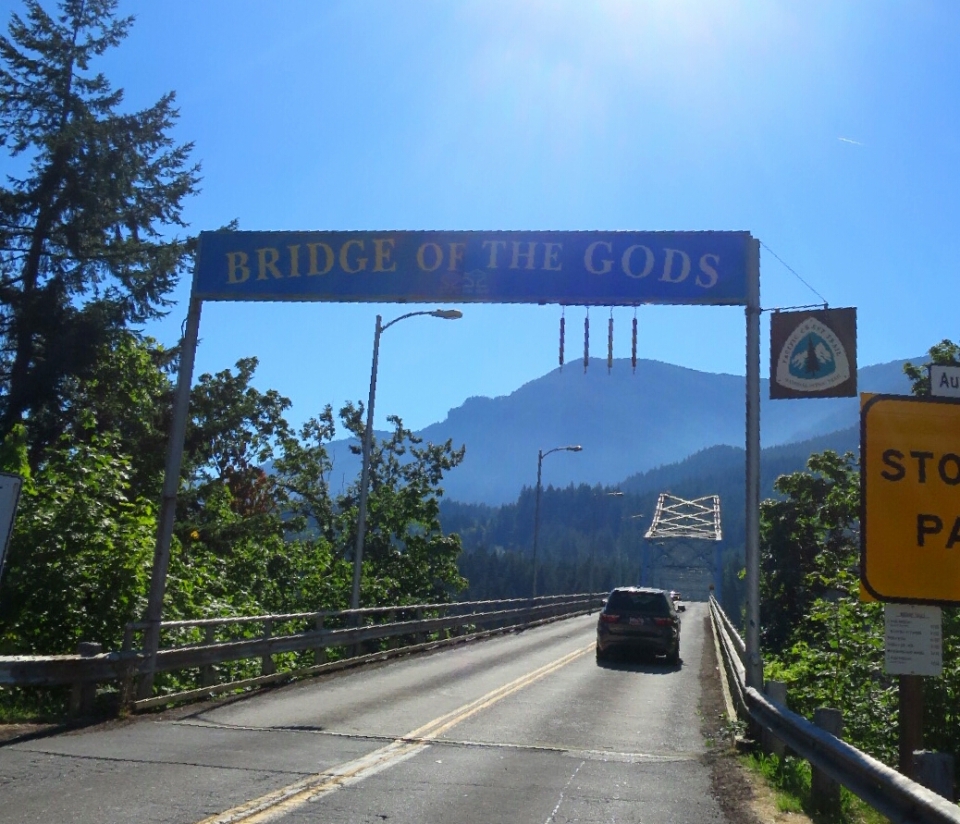 A beautiful cool breeze welcomed me to Washington. This welcome did not last. It was a long, hot and sweaty climb with little respite. Being at lower altitude,  the humidity was really stifling.  My clothes were stuck to my skin and felt like I was wearing plastic bags. There was nothing else to do but my head down and plug along. About midway up the climb I had my first full view of Mt Adams to the north and Cascade Locks in the valley to the south. That was really uplifting and it powered me for the rest of the climb. 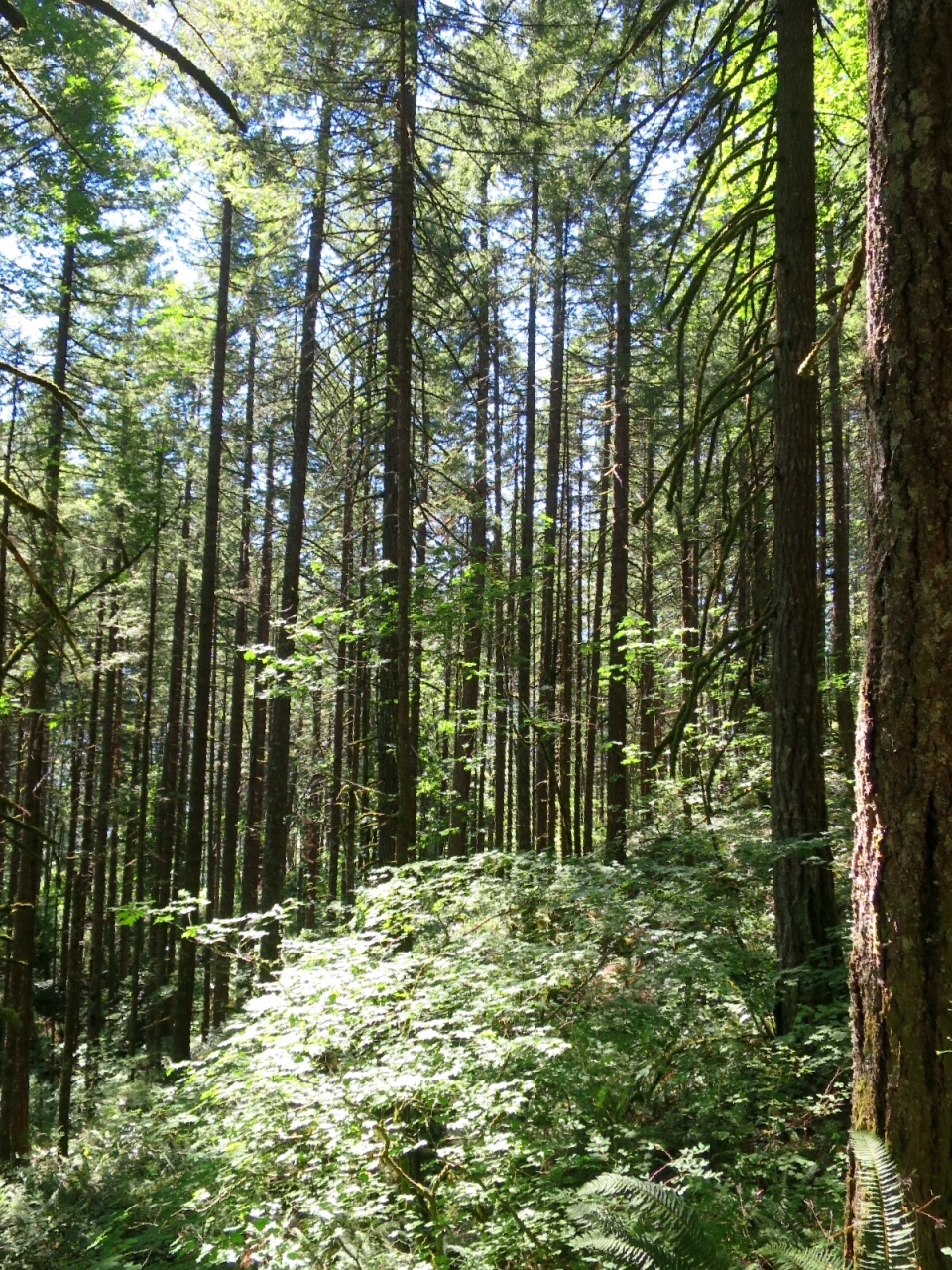 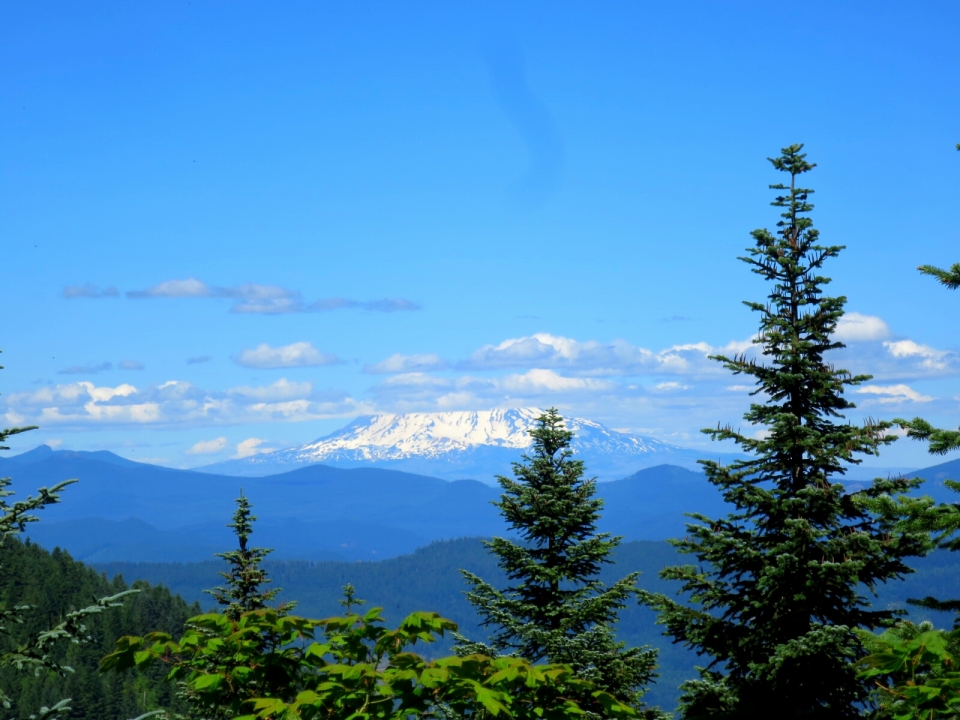 Six hours and 12 miles later I entered natures cool-room. A shaded forest, at elevation with a light breeze. It was bliss. And the reward for the climb was right in front of me. To the north I could see Mt Adams and glimpses of Mt Rainier and Mt St Helens through the trees.  The sweaty labour was quickly forgotten,  I was humbled and dwarfed by the  majesty of the forest and the snowy peaks to the north.

So you can imagine my disappointment when I started  to descent towards Rock Creek to be passing through coups of clear felled forest.  It reminded me of sections of Northern California.  The only bright note through this cleared forest was the profusely growing berries which were almost ripe and were giving off a most delicious aroma. Not surprisingly, the trail crossed many well used forestry roads. 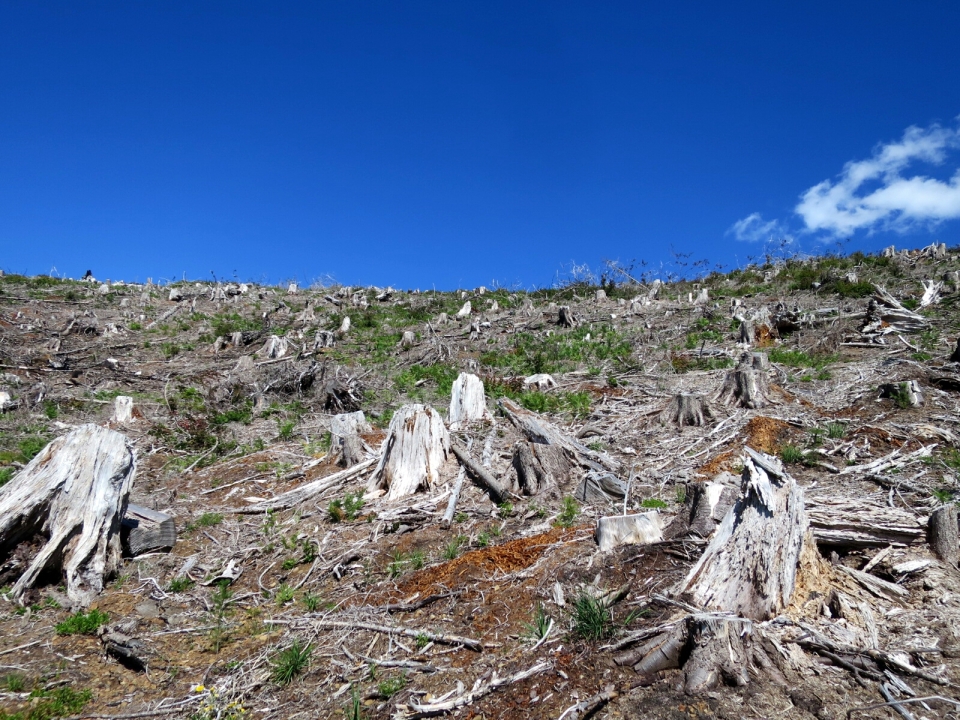 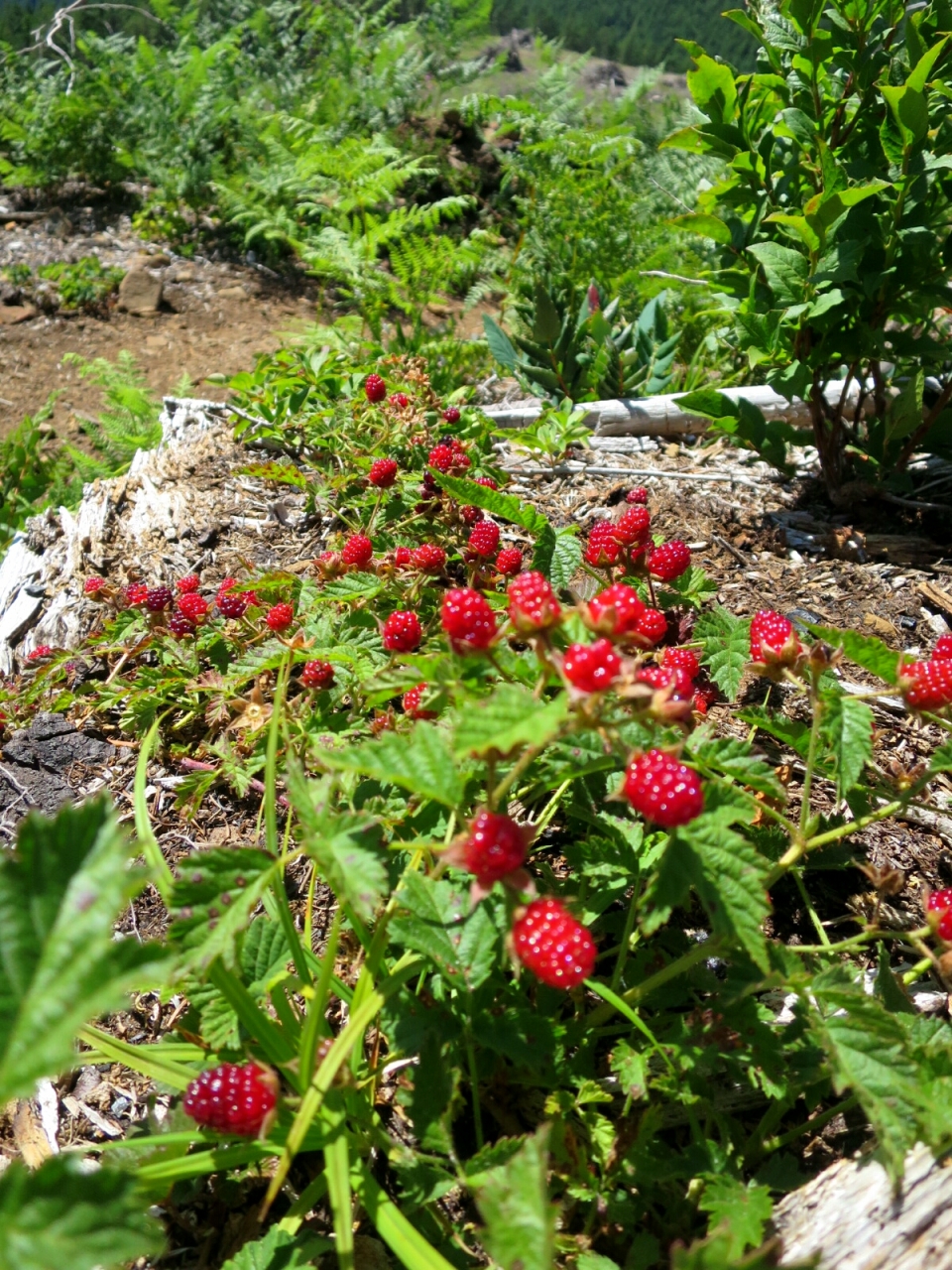 As  I descended to Rock Creek, a drop of nearly 2,000ft, the humidity started to rise again.  Nearing the creek I could smell creosote. A timber bridge acros the creek was the source of the smell. I had run out of water and decided to camp a little further south of the bridge. The campspots closer to the bridge were occupied by two trail maintenence workers. First time I’ve camped not far from other people.  It was wonderful to stop. My feet felt like hot sausages about to burst their skin.

It was a hard start to Washington. I’ve drunk nearly 5 litres of water today. I have a feeling that there will not be many easy miles in Washington.

2 thoughts on “SOUND OF SERENITY”