Although I was exhausted last night, sleep did not come easy. It was not just the howling of the wind that kept me awake. Even though the wind russling against the tent sounded like big fat drops of water were falling on it. It may have been the altitude.  I finally drifted off just after 2am. Hammer slept like a log and in the morning was bouncing outside, full of beans and ready to tackle another day. He even made me a coffee to have in bed before facing the bracing chill of the morning.  We packed up quickly as it was freezing cold and walked into Mt Laguna village to fill up with water.

Hiker box left outside the Mt Lagoona outfitters. A bit early for a real beer.

Back on the trail it was not long before we left the pine forest behind and entered the open expanse of the high desert with absolutely stunning views to the east of a bone dry desert valley.  Once the sun was up it was again perfect hiking conditions as we wound our along the ridges.  As it was the weekend and we were skirting close to the Sunrise Highway we were joined by groups of day hikers and quite a few trail runners. As we found out the runners were training for the Pacific Crest Trail 50 miler. 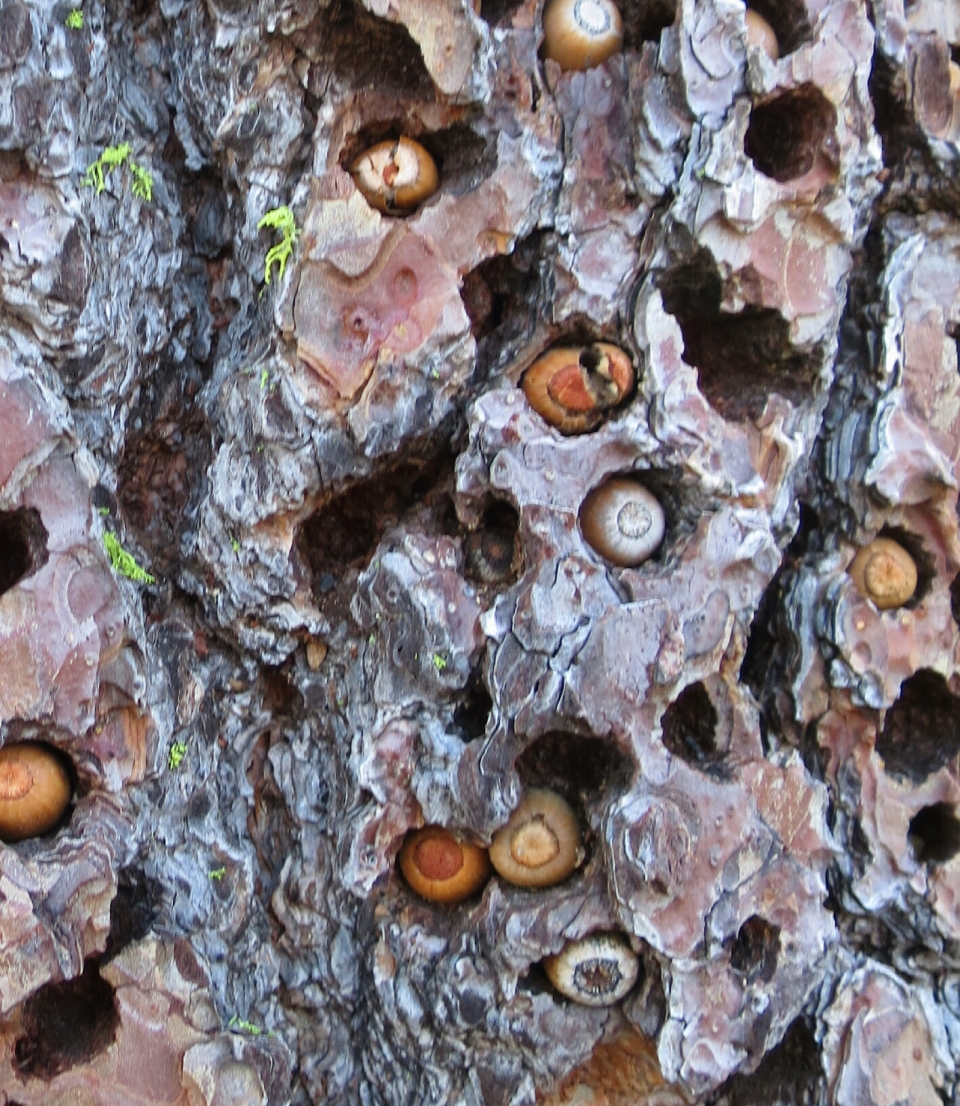 Wow they really do squirel away the acorns. 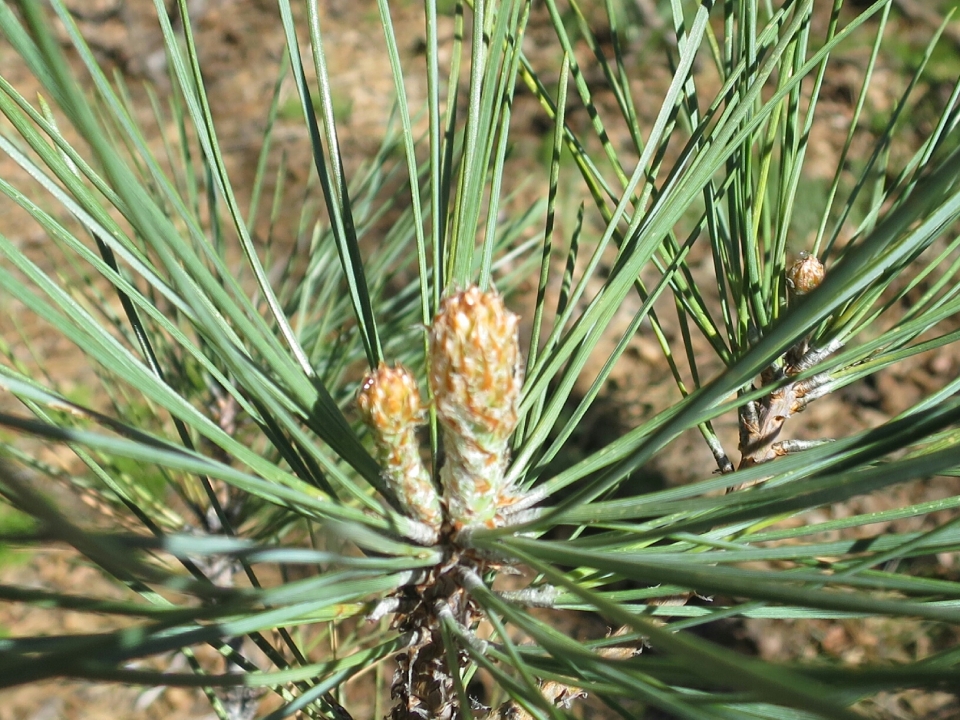 Huge pine cone Lou-Seal had to leave behind. 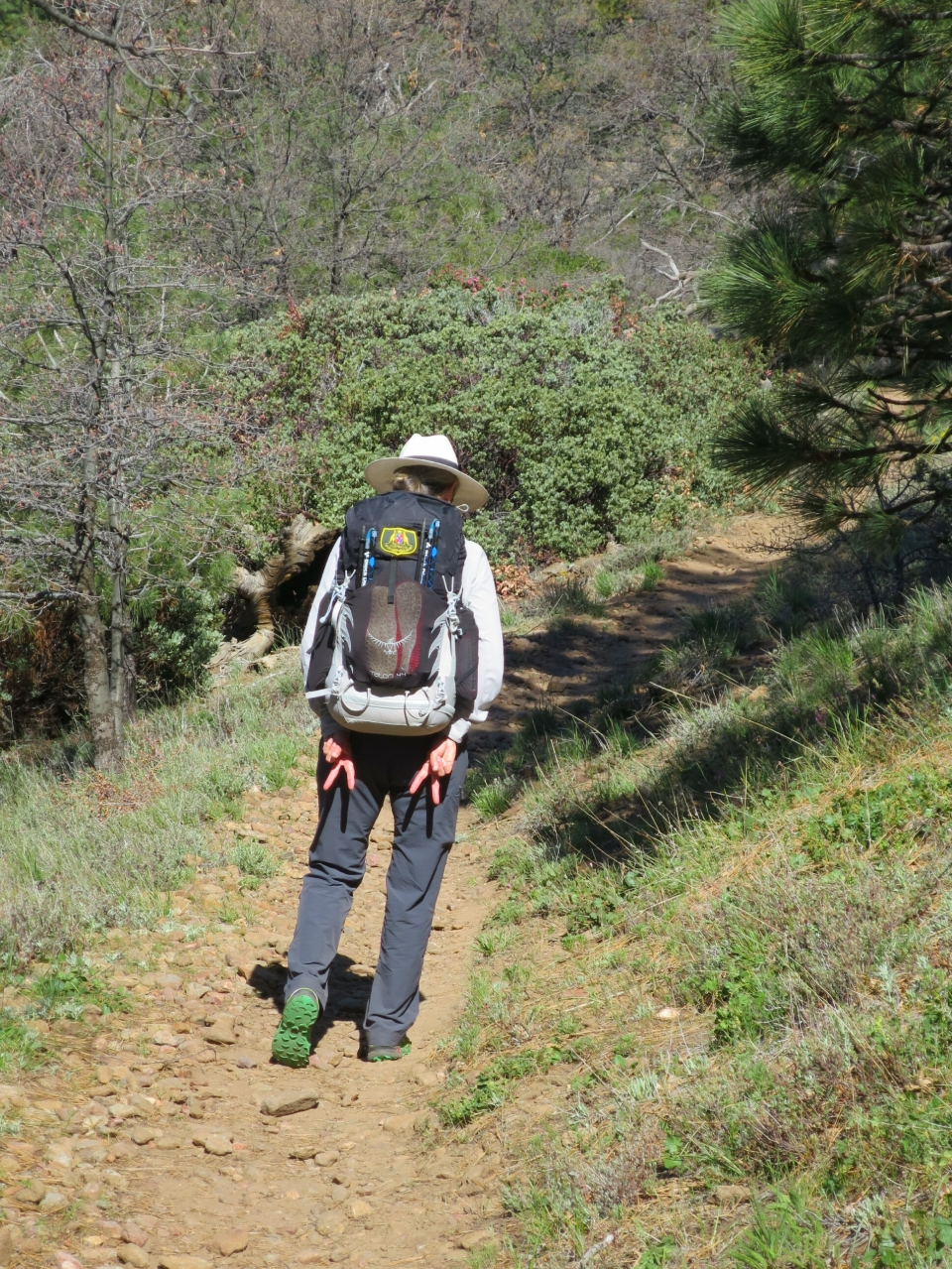 We found the walking was slow going today, not because of the terrain as we were  pretty much staying at 6000 feet, but the surface we walked on was very rocky and uneven underfoot. For anyone with already troubled feet the trail surface today would have provided a real pounding. We are both going OK with our feet. Hammer has a small blisters on both his little toes and I have several hotspot on my left foot which is not causing any serious problems. So far we are on top of it. 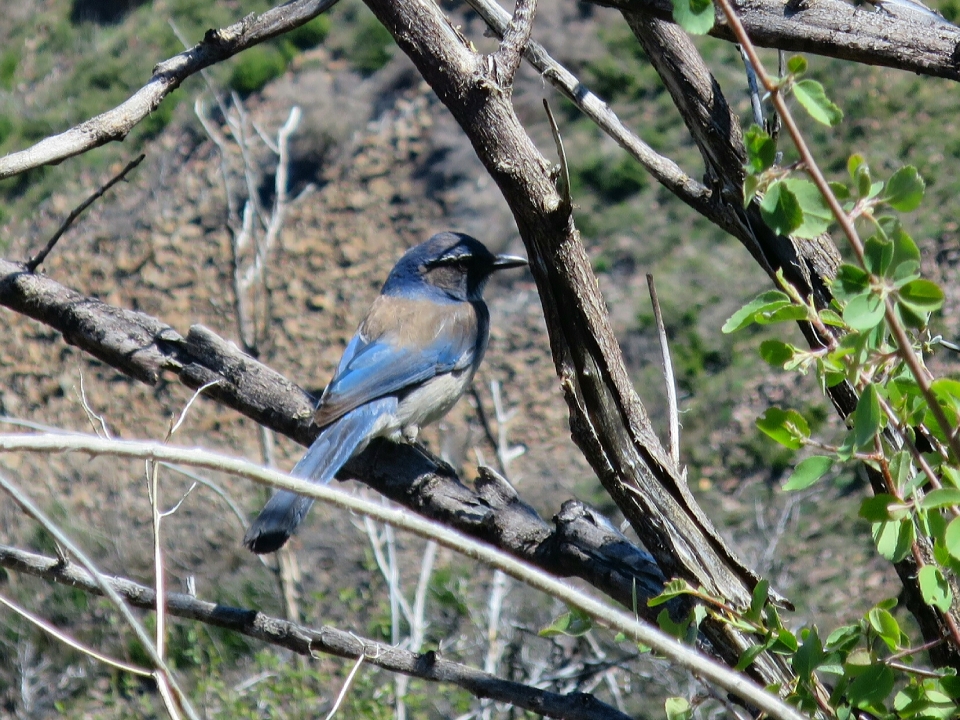 Great tasting dates from our care pack. Thank you Joe and Dede!

Busy on the weekend 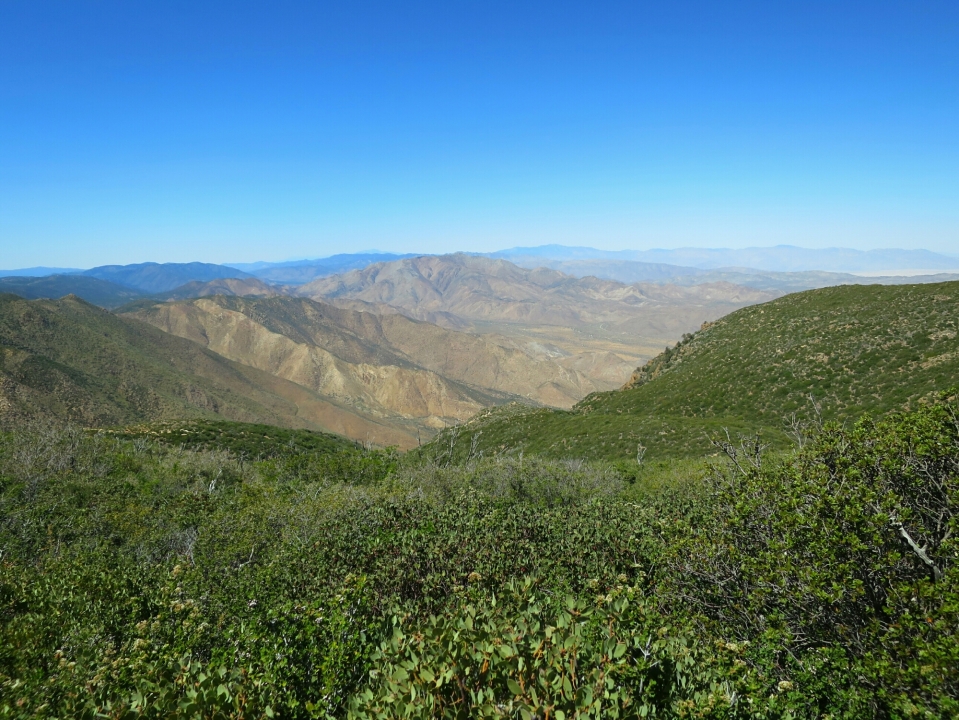 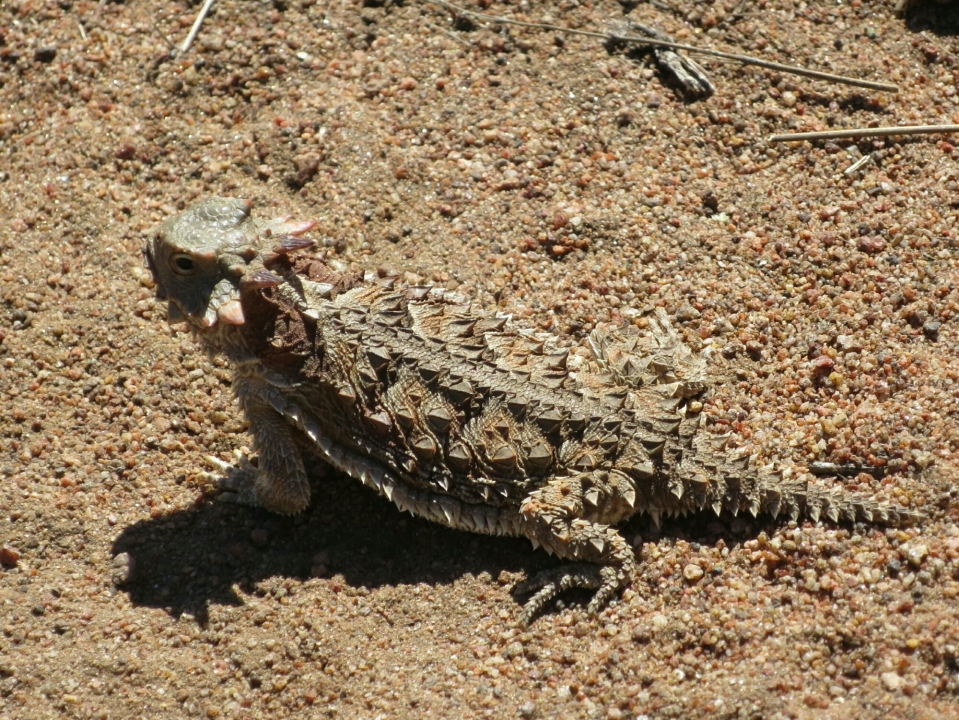 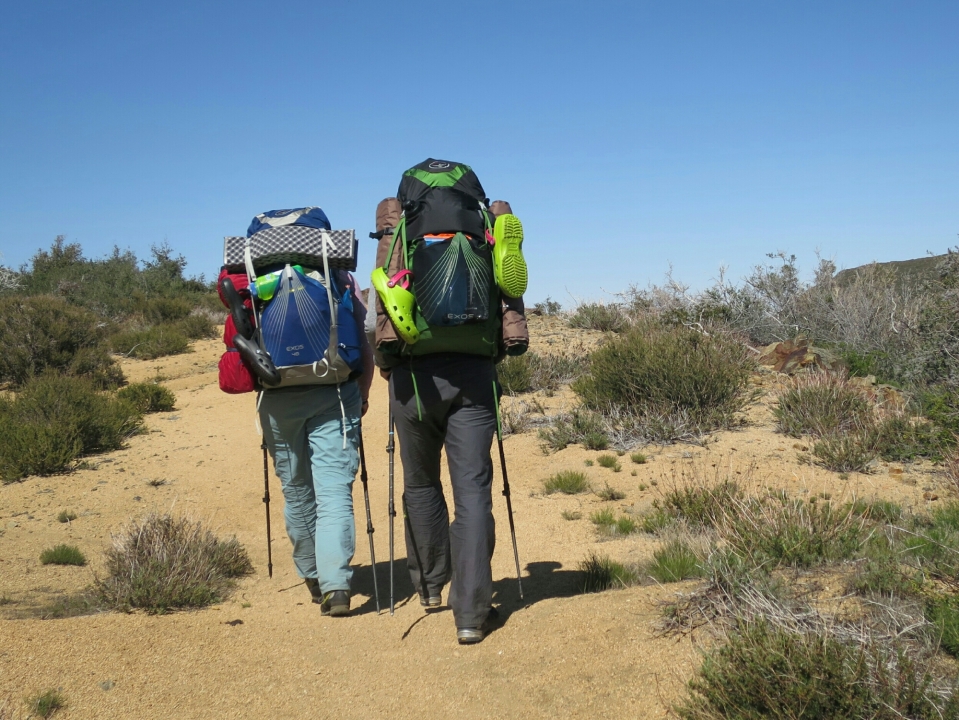 A German couple we passed on the way.

We stopped early to make a camp on the trail amongst a boulder field. The sun was still up and it was so nice to get the tent up while it was still warm and  not to rush dinner. A few other hikers had camped at various spots amongst the boulders. The sun had gone down, the wind had eased it was so peaceful and silent. I was working on the blog, warm and tucked inside my sleeping bag and Hammer was reading his Kindle. Then our serenity was disturbed by a late arrival who decided to camp right alongside us, within feet of our tent. There goes the serenity.  She has what sounds like whooping cough and is sleeping in, on and around really noisy material,  sounds like crinkly plastic bags, probably a tyvec sheet. Noisy as anything setting up and took a long time to settle down. Then got up again and started whooping and stomping around.  It is a really big space out here. But we humans are social animals, with a herding instinct. We just happen to have came across a very anti-social animal with a herding instinct. And sice I was awake I looked out the door and could see the moon and the stars. It was quite spectacular.

Cooking dinner on the trail.

Our camp spot before the serenity was shattered.