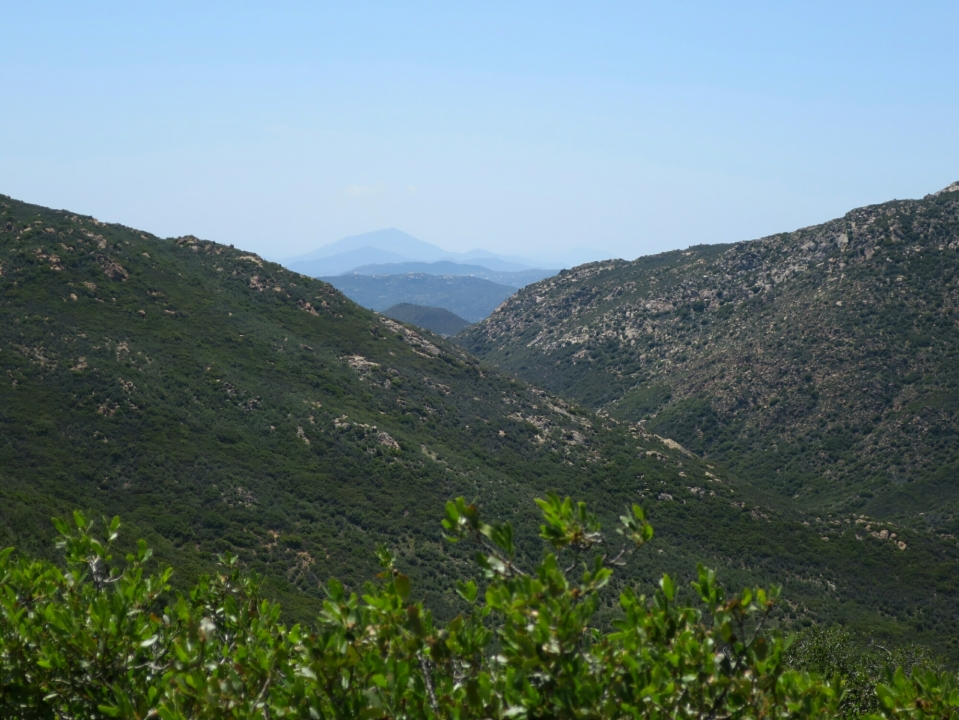 It seemed I had just fallen asleep and it was time to get up. It was so cold at 5am, I really did not want to move.  I could hear other hikers up and about. Hammer was awake so I knew there was no delaying it,  it was time to break camp.  The tent fly was covered in dew on the outside and heavy condensation on the inside but we were toasty and dry inside. The tent passed it’s first night on the PCT with flying colours.

It took us about an hour to pack up.  The sun was still not over the horizon and it was so cold standing around having breakfast.  Something we are going to try to do in the future is to pack up and head out on the trail to warm up. Then stop for breakfast later when the sun is up.

Once we started hiking, it did not take long to warm up.  Hiking seemed easy early in the morning. We passed though stunning grass meadows, shimmering in the early morning sunshine. Everything looked so lush and green. We stopped to chat to a women out for her morning walk. She said that there had been some rain recently which is why everything was looking so green.  We also learnt from her that we were in what is called  ‘high desert country’.  I did not fully appreciate that the elevation of our starting point, Campo is at 3000  feet (around 1000m).  And today we went up another 3000 feet. 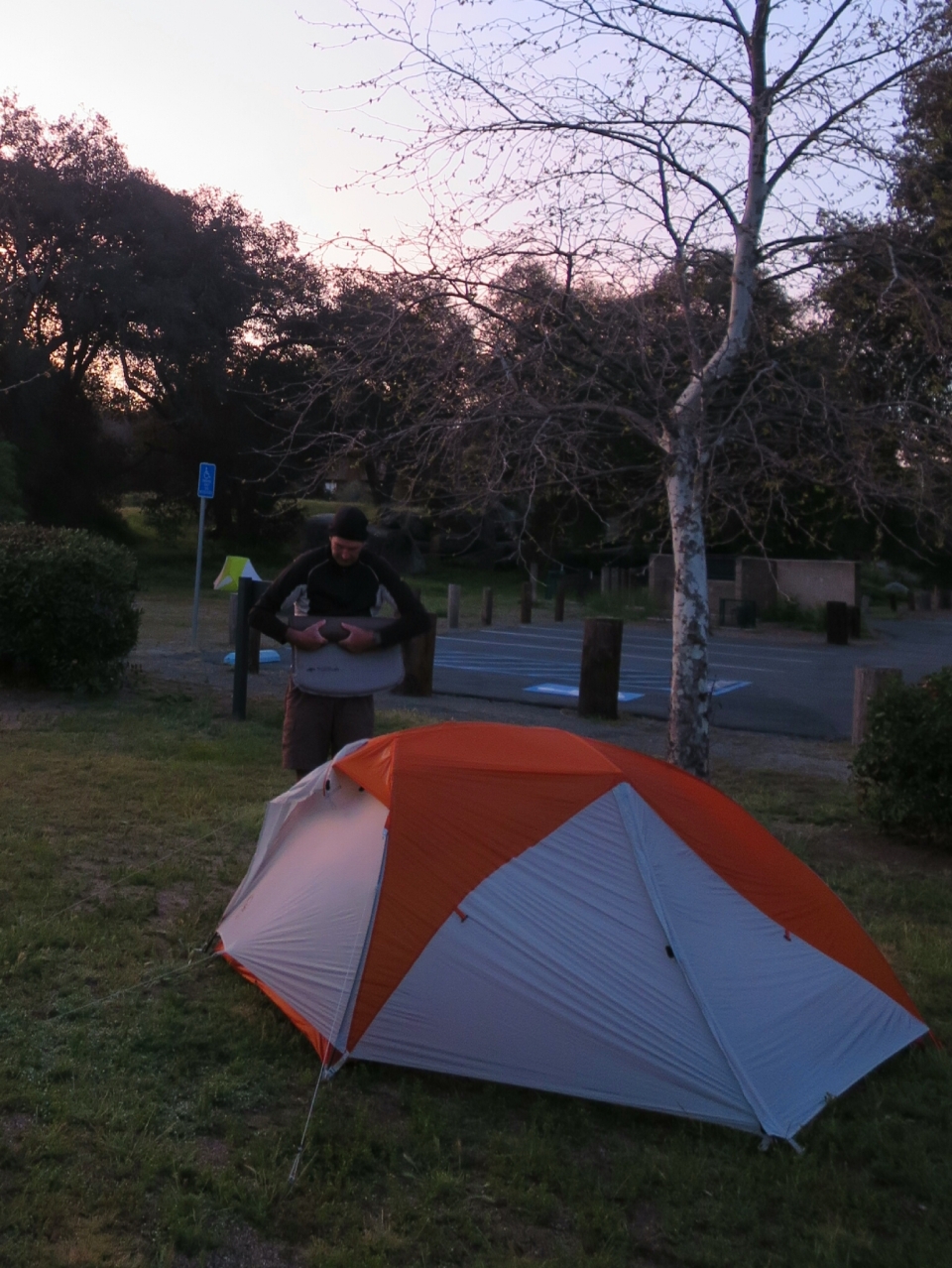 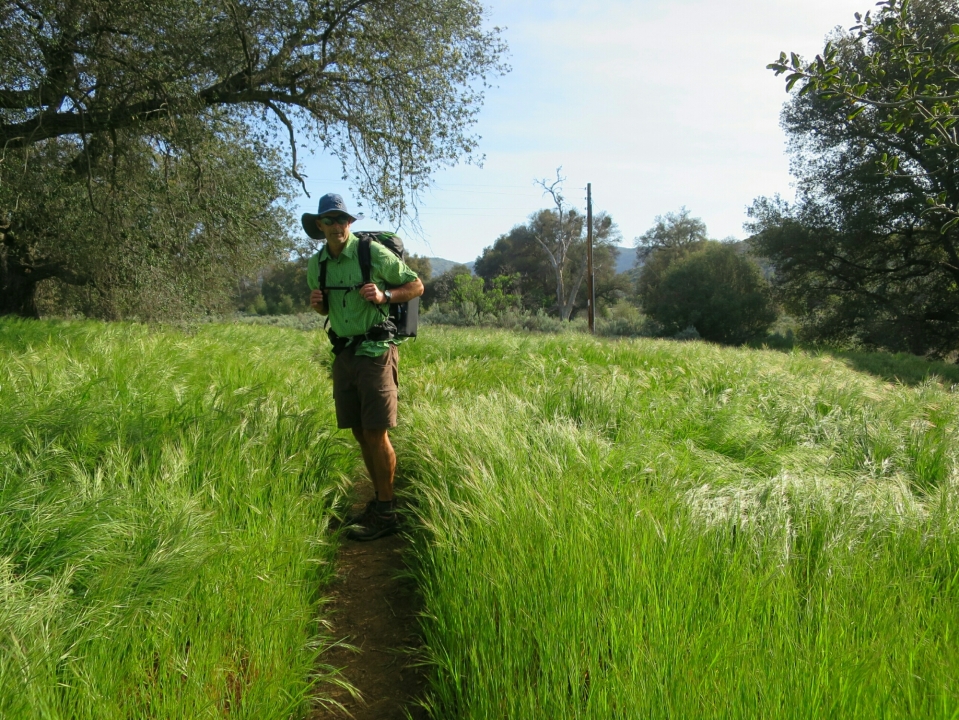 Took me a while to realise what these guys were up to. Hunting turkey, rifles and everything.

Some lovely hiker left a AT&T sign in the sand. Phone reception so I uploaded the first days blog.

After leaving Lake Morena valley we started ascending gradually and we pretty much walked uphill for the rest of the day. As we got higher,  the gorgeous spring blooms we had seen since we started out yesterday, were largely absent. We seem to wind around several canyons eventually leveling off at around 6000 feet.  Looking back there seem to be so many distant ridges. It was hard to work out which direction we had walked from. And now we were surrounded by tall pine trees. The smell of the pine forest was beautiful, a sweet, berry like smell. Seeing tall trees and then entering a forest was such a contrast to yesterday.  As were setting up camp we both remarked “Doesn’t it feel like we are in bear country?”

I won’t say it was an easy day hiking. The adrenaline from the first day excitement had worn off.  While in the morning it felt easy, the light was fantastic and spring blooms were everywhere but by the afternoon, scenery was not enough to destract us from the feeling that  time seem to stretch out. We felt like we were not making much progress, like walking through treacle. All up it took us 10 hours to cover the 21.4 miles  (34km).

We are camped with a handful of other hikers at Burnt Ranch Camp Ground. It does not seem to have opened for the season. Water is still turned off and the bathrooms are locked.  We will have to go into Mt Laguna in the morning to fill up our water bottles.

The wind is howling outside and it is cold. My hands are freezing trying to finish off this post before turning in for the night. 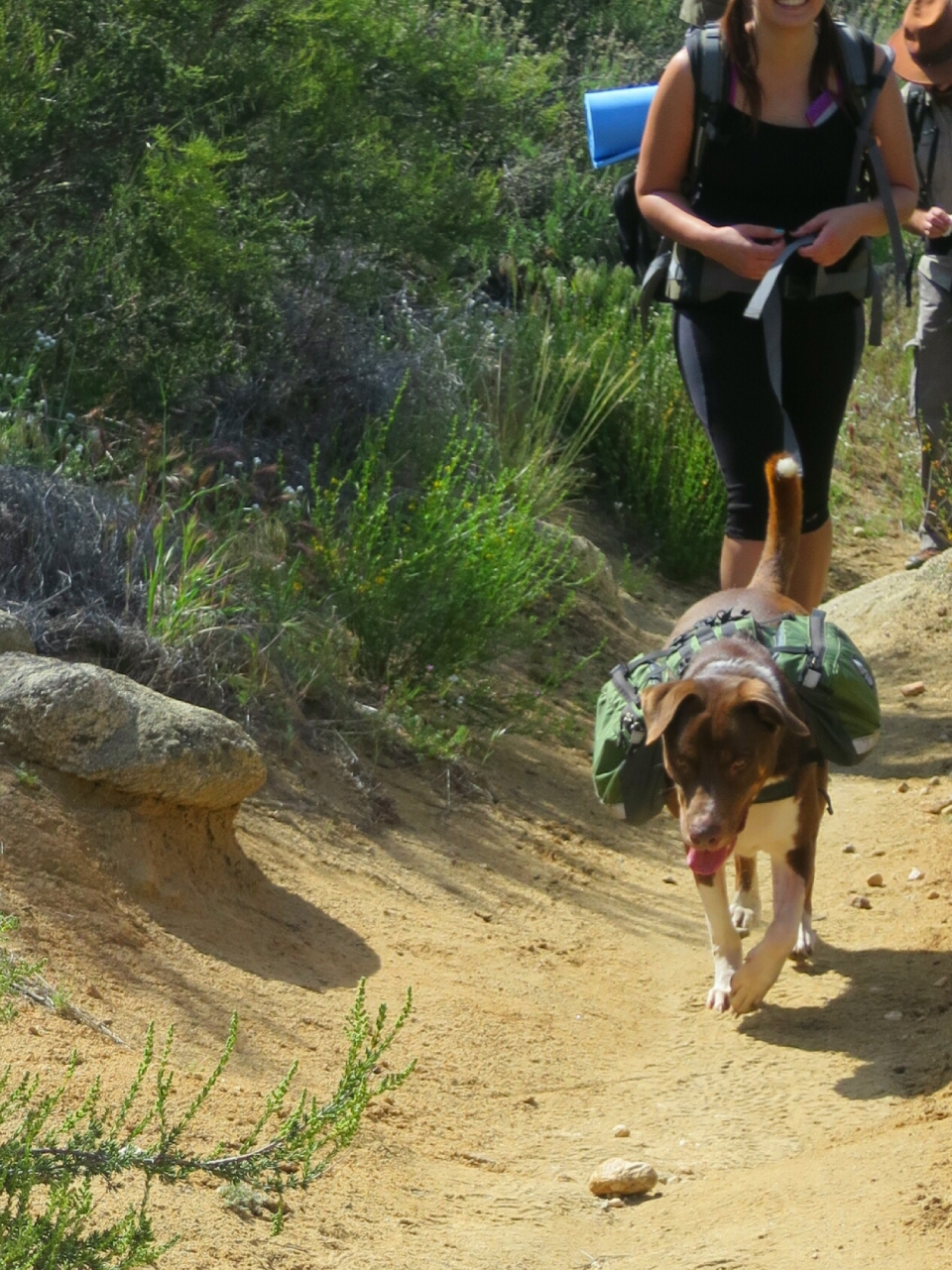 Camping for the weekend with his family. Had to carry all his own food. 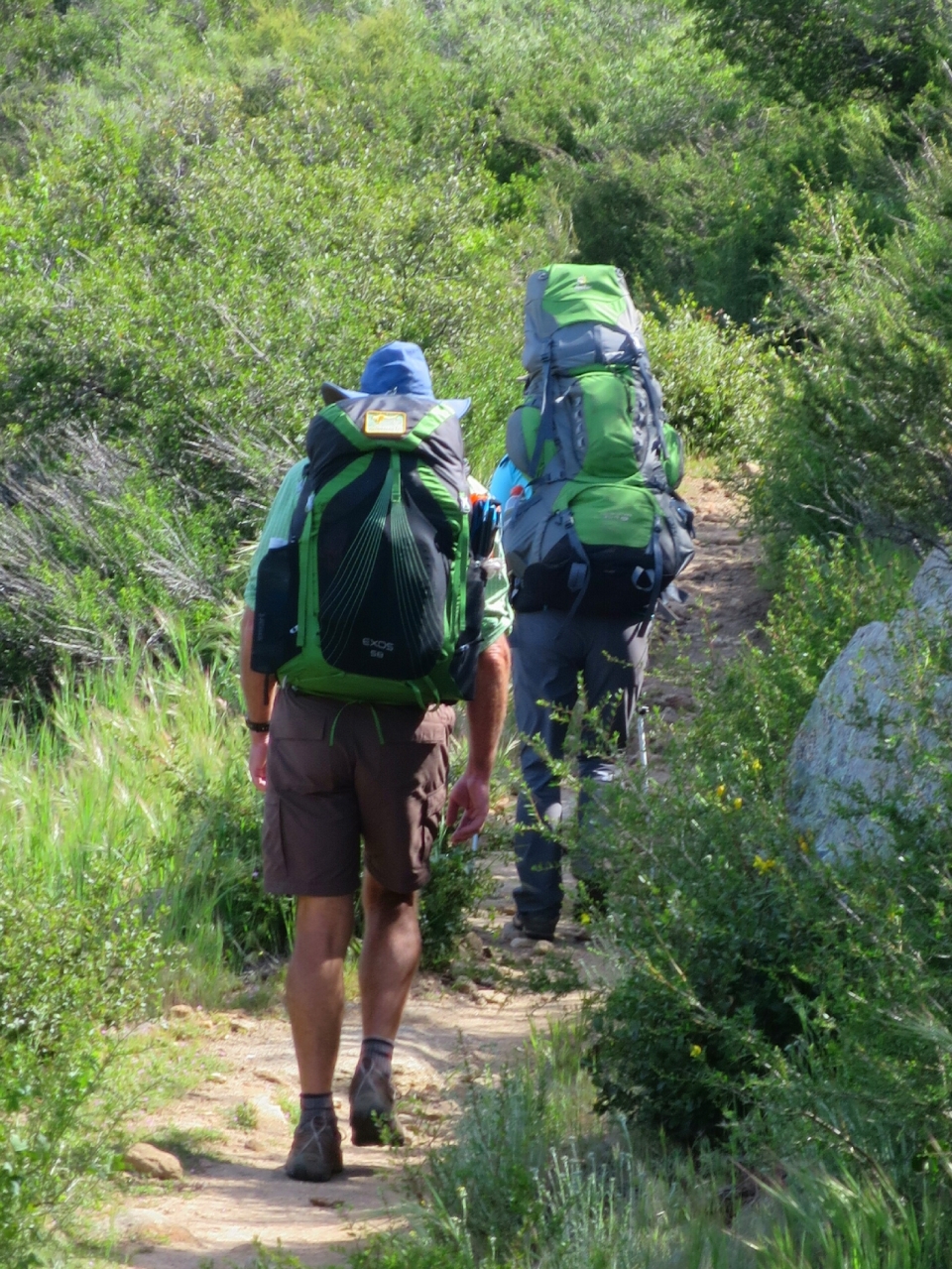 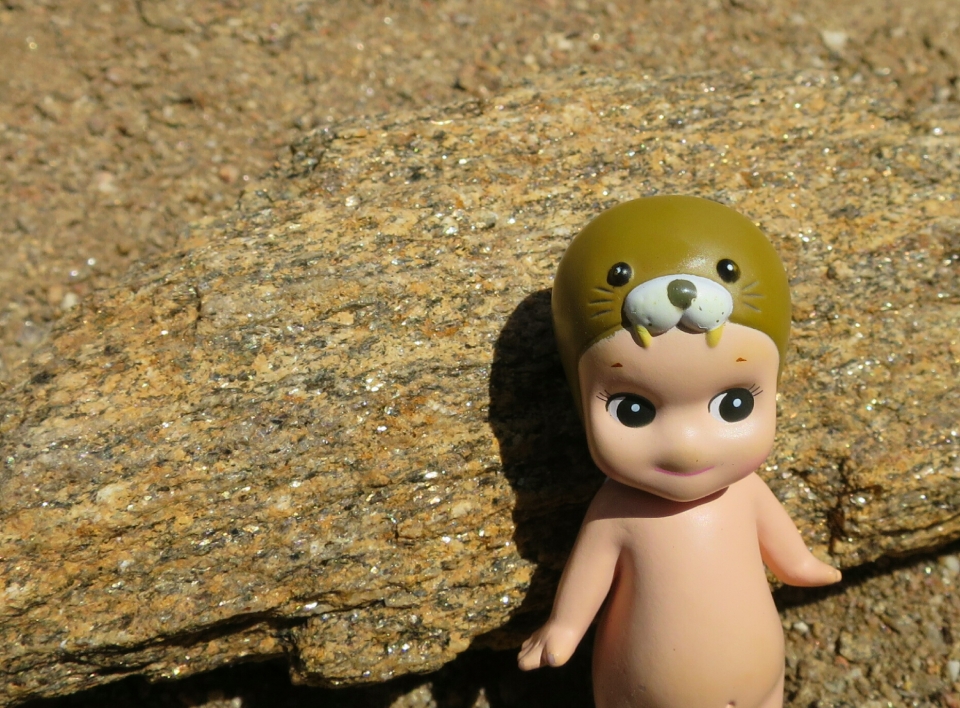 Canyon valleys stretching out behind us.