Fairbanks, Denali, Anchorage, Portage, Homer, Fairbanks July 29-Aug 5, 2010
After a mammoth 20 hours on a small bus, we finally made it to Fairbanks where we exchanged the canoe, as our mode of transport, for a Ford Focus. We joined the lava flow of RV’s and tour buses for a whistle stop tour of Southcentral Alaska. The pictured RV has travelled all the way from Texas!

The upside of arriving in Fairbanks the long way around, is that we got to experience the Alaska (or Alcan) Highway, something I was hoping to avoid. It is a 1,520 mile road built by the the US military in 1942 – and took only 8 months to build! An amazing feat that only wartime emergency provisions can accomplish, traversing extremely difficult terrain and extremes of climate. The highlight of this section of the road trip was passing the eastern rim of Kluane National Park with distant icefields, glacial valleys and Canada’s highest mountain peak Mt Logan (5,959m) hidden in the mist.

Fairbanks is a large, flat and spread out kind of town dominated by an army base, the University of Alaska and shopping malls. South of Fairbanks we spent two nights camping in Denali and did not see the mythical Mt McKinley in Denali National Park but did see a few grizzly bears, caribou and moose – all from the safety of the park bus which is the only way to access the park.

I had no idea of the size and nature of Denali – the NP is huge and is dominantly sparse Boreal forest giving way to the open plains of the Arctic tundra. Few places to hide from things that can eat you. 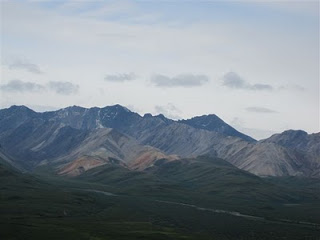 On the bus is just where I wanted to be as we watched an aggro female grizzly with 2 cubs giving chase to a young male bear who wandered into her territory.

She moved so fast it was awesome and scary at the same time. From Denali we shot though Anchorage to arrive in the Portage Glacier Valley.

We camped at Black Bear camp-ground, a magical spot within the Chugach State Park.

A trail went past where we were camped by the Portage River and I was tempted to go for a run until I saw a sign warning about recent bear activity in the camp-ground. That was the end of that – jogging is the 4th riskiest activity you can do in bear country. In the morning I was enjoying the early morning stillness while having a coffee when a moose with 2 young wandered by in the stream shallows. Caught me by surprise they were so silent and it took me while to work out what they were – close up they looked like very large horses with strangely shaped heads. The streams feeding into Portage river are so crystal clear that we could observe salmon swimming upstream to spawn. 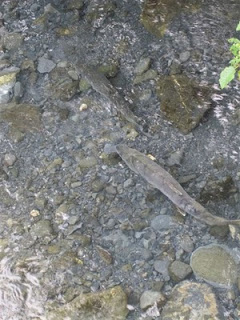 From Portage we drove through Americas longest tunnel a 2.5 mile single lane path under Portage and into Whittier. The tunnel was built by the military in the 1940’s to access and protect the waters of Prince William Sound. Strangest experience driving through the tunnel as it was not designed to carry cars.

And Whittier is an even stranger outpost, still shaking off its military heritage. On the way south we passed through the stunning fisherman’s paradise that is the Kenai peninsula with hundreds of fly fishing enthusiasts lining the Kenai and Russian Rivers.

By the time we hit the coast and Cook Straits, the clouds gathered and continued to darken as we got into Homer. 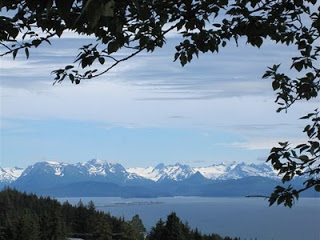 The next day we woke to a cold, rainy day with low hanging mist completely obscuring the harbour. So we left to go back to Fairbanks, chasing the sun.

Arriving back in Fairbanks to catch a flight to Seattle, brings to an end the Yukon Territories and Alaskan part of our trip (or vacation!). It is a huge area to cover and we have really only skimmed the surface. It has been a rich and at times challenging experience where you are never to far removed from the wild and untamed natural landscape. It has reminded me of how insignificant we really are in the scheme of things. Canadian poet Robert Service summed up the desire to return to the Yukon in his poem The Spell of the Yukon……