Lost in the Pyreneese

On the Camino, as in life, we see the big signs and think we know where we are going but it is just as important to look out for the small signs that point the way. 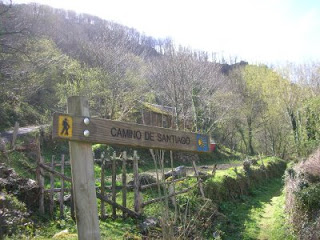 On the first day of my excellent adventure I fell and hurt my knee before lunch and got lost in the Pyreneese after lunch. Left St Jean Pied de Port with Tara whom I met yesterday on the bus. She is an English ex-army officer who is fluent in French and Arabic and has served in Iraq. The morning was foggy and we were warned about not taking the mountain route but to follow the alternative which stays partly on the road. There have been a few people getting into trouble with snow and white out conditions. The morning was magic, a low mist hung over the town of SJPP and I was finally on my way.
.

The conditions were great for walking and after stopping at a bakery for chocolate bread we were off. The first part of the trail follows the road and it can be quite dicey as the road is not wide and there is little verge.This is where the fall happened. I slipped on the drain on the side of the road getting out of the way of oncoming cars. I had not even walked 4 km. Is this an omen for the rest of the 800km or so to go? It did not hurt too bad – only minor. The sun came out and it was great to be able to see the surrounding we were walking through. Met Ursula from Austria who walks and talks really fast. Before too long I found that I was walking on my own.The scenery was stunning, huge green mountains in all directions. After lunch the walk was going well untill the next detour off the road which had huge sign pointing to the left.I took the turn and was enjoying the quite solitude, my thoughts drifted off and I noticed the path was going gradually uphill. I ploughed on but was a bit concerned that I did not see any footprints in the soil. It was only when I got to the snowline that I knew I made a mistake. I was lost. I had not seen a single arrow pointing anywhere for over an hour and a half of walking, just a bunch of sheep who stopped to give me stare.

The wind was whipping around and the clouds closed in around me. I remembered the Cadet stories The Hammer told me about telling his students that if lost the best thing is to retrace their steps to the last place where they knew where they were. I am so so glad I paid attention. The retracing of my steps took another hour and half of very steep descending. I did not even realise that I had climbed so much. And sure enough there on the path was a very clear arrow that I somehow managed to miss. I had my head down in quite contemplation because I knew where I was going. Must have been all those H5 runs that have ingrained in me the idea that if there is an alternative, the high road is always the right way to go. 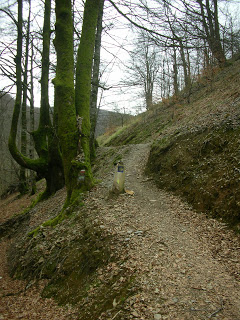 Back on track, lost 3 hours climbing the wrong ridge. Now there was more climbing to do. Got to Roncevalles at 5.30 after leaving SJPP at 8 am. Roncevalles is a small town dominated by the church. Finished the first day of my excellent adventure with lashing of ginger beer. No not really, had dinner in a small restaurant sharing a table and a few bottles of red wine with four Frenchmen, two quite Americans, a Dutchman, two Italian women, Ursula and Tara.

Stayed in a fantastic dorm which is a converted monastery with beds for 100 all in one room. Did not hear one snorer. Either lucky or tired.