Like clockwork I was awake at 4am. Damn, I really wanted to sleep in and make the most of the hotel comforts. Hammer was fast asleep, so I completed the blog updates so as not to wake him. By 6am I got dressed and walked outside to get coffee while Hammer got to sleep in. It was a brilliant sunny morning. The main street in town looked perfect lit by the low angle of the rising sun.

When I returned Hammer was awake and we contemplated staying in Frisco for another day. It was such a beautiful morning and the town is absolutely lovely. There is so much to do outdoors from the lake to the surrounding mountains. We still had a few tasks to complete and it would have been nice to have a bit more time. But, the trail end is in sight and we really just want to finish the hike. So no extra day in town for us.

We checked out and were on the bus to the trailhead in 5 minutes. By 10.30 we were back on trail feeling stuffed to the gills with way too much town food. We both commented on how strange the packs felt. But within an hour we were back in the groove of hiking on. 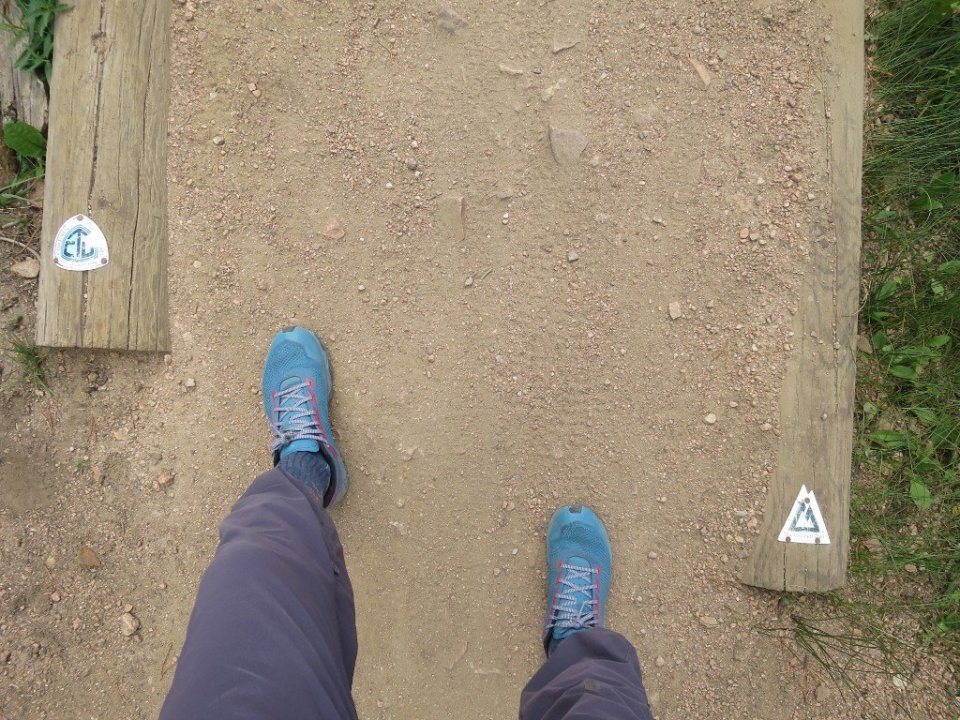 The CDT trail is shared with the Colorado Trail and we started the gradual climb to the ridge of mountain peaks which tower over Brackenridge.

The sky was blue the sun was shining and we were in great spirits. Today the trail seem to have mainly mountain bike riders. Groups of 2 or 3 would pass us going downhill while we laboured to climb. The forest we hiked through was unremarkable with active logging operations underway in segments. It was interesting to see the looging dozer at work. One machine, one operator and dozens of large pine trees were cut and neatly piled in the 5 to 10 minutes it took us to pass by. From this efficient operation it’s clear that lumberjacks jobs are never coming back. 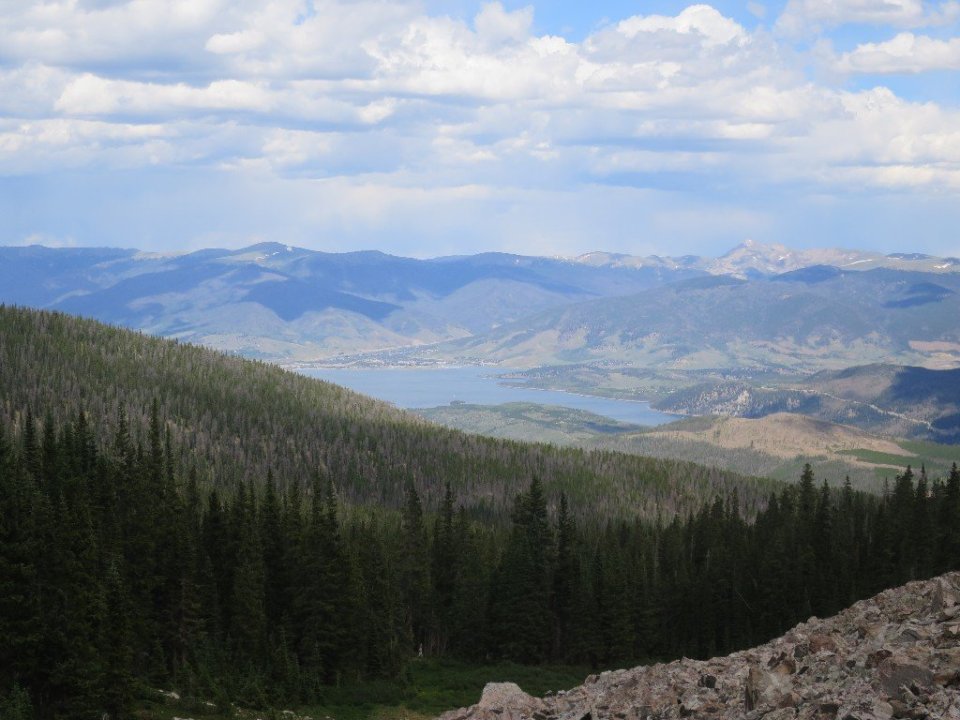 By the time we got above the treeline the sky was grey and we were getting exposed to a a strong gusting wind. The views over Breckenridge were quite spectacular. Once we were up the ridge the gusting wind was on a whole new level of strong. Following the ridge was difficult as the wind was sweeping us sideways.

Down on the other side of the ridge, the Copper Mt resort and the ski fields dominated as well as two huge tailing dams in a valley behind the mountain. A curtain of rain hung over the valley. I couldn’t wait to get off the ridge. Dark thoughts of quitting and a desire to return to town comforts was overwhelming for me, although I knew I couldn’t quit now. Maybe we should have taken another day to recharge in town. 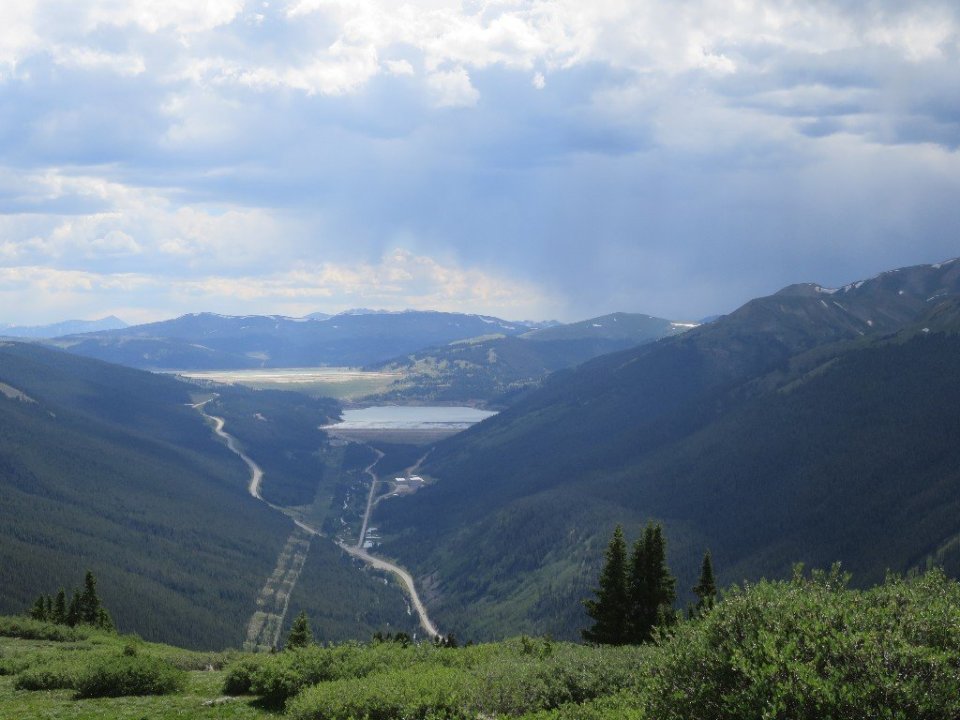 Anyhow I pushed these thoughts out of my mind and we slowly started to descent down to Copper Mt ski village. We were soon out of the wind but the sky was looking angry and grey, threatening rain. On the way down we passed two cyclists going up a relatively steep section. I was keen to see how its possible to ride a bike up some of these steep slopes. But they had already stopped to let us pass. We stopped to chat and so met the outdoorsy couple Mark and Mel. Mel was originally from Byron Bay in Australia but has lived in the US for nearly 20 years. She and Mark have ridden these trails for many years, while they lived in Frisco, and were familiar with the conditions. So nice to meet and chat to interesting people. 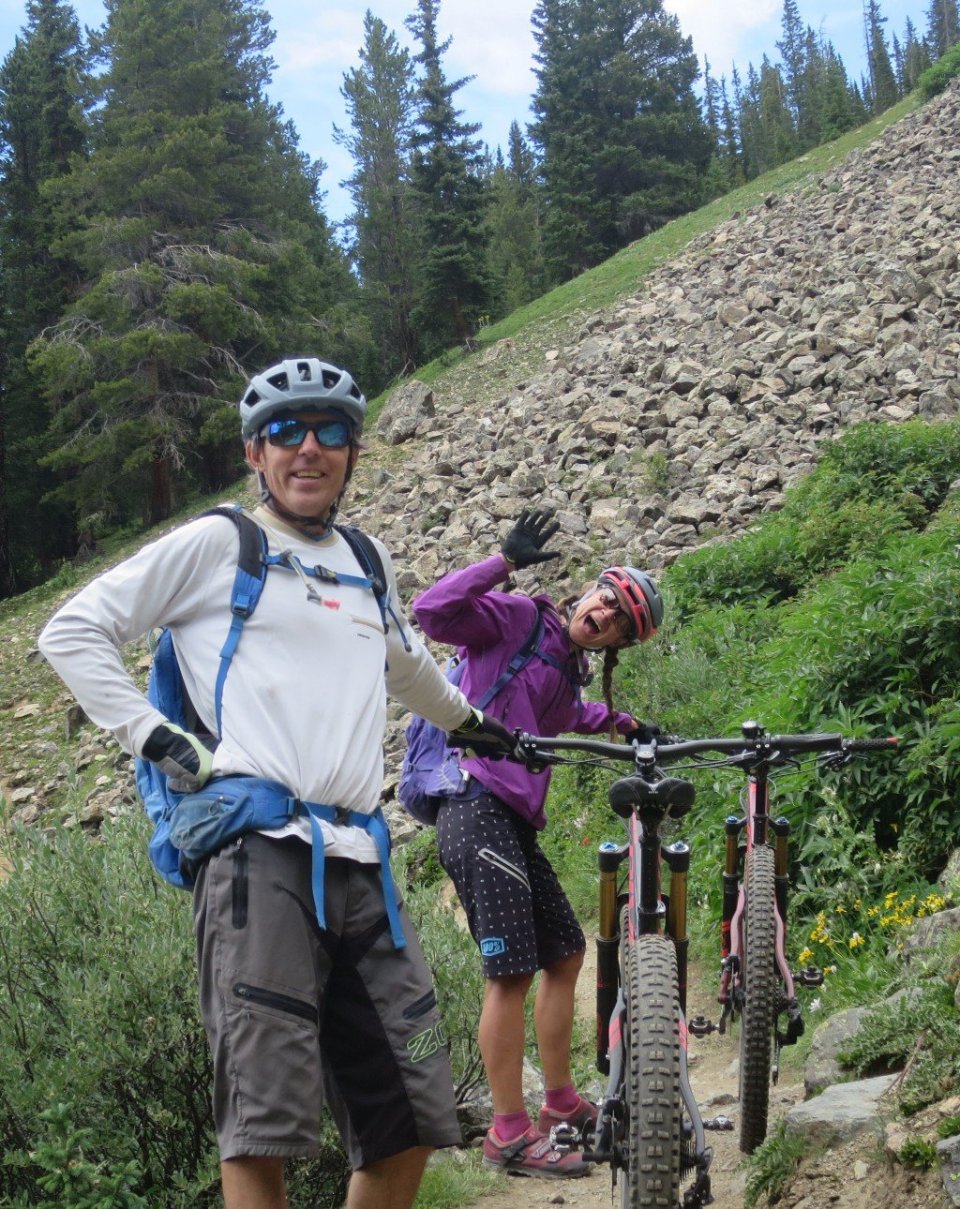 We made the Copper Mt resort by late afternoon. Ski resort towns look so strange in summer. There was hardly anybody around as we followed the trail detour through the village before rejoining the CDT along the bottom of the ski runs. Before we could find a camp site it had started to rain. We stopped at the first suitable spot and got the tent up. The rain came in squalls as it started to get dark. Its going to be interesting to sleep to the sound of traffic on the I-70 in the valley below. Hammer was asleep almost as soon as he lay down. 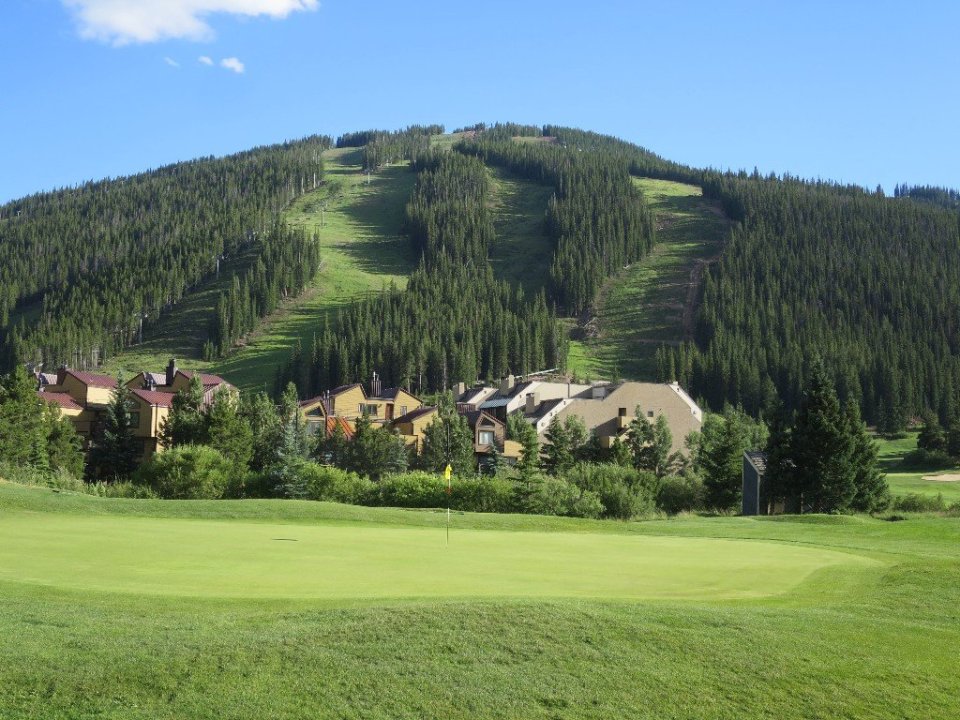