The small town of Kanab, where we stayed again last night, is perfectly located for visiting the local parks. Midway between the Grand Canyon, Bryce Canyon and close to Zion National Park. The town was also the setting for numerous western films made in the 1940 through to the 60’s. Easy to see why it’s known as Little Hollywood, with such stunning ladscape framing much of the town.

Before we headed out to Zion, we again stopped at the Kanab Creek Bakery for breakfast. We so wish this could be our local.

It was only a short drive out to the eastern entrance to Zion NP. A very scenic drive that doesn’t quite prepare you for the wonderland once inside the park. Towering sandstone formations worn smooth by time everywhere you look. 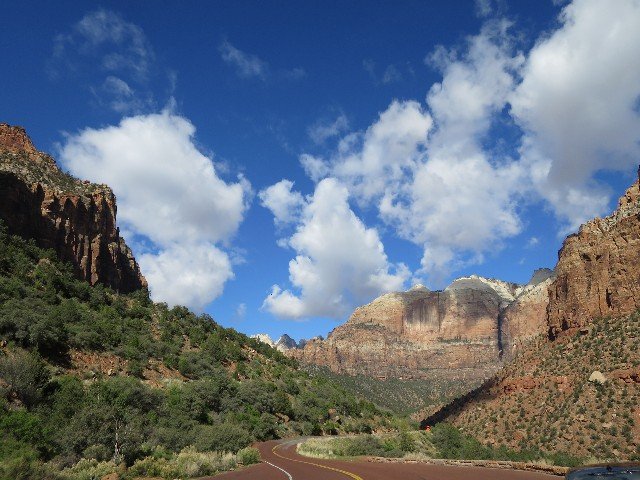 Being at lower elevation then Bryce Canyon it was so much warmer. And being such a beautiful sunny day made it feel like summertime. This feeling was further confirmed when we got to the visitors centre, it was very busy. Being a narrow canyon valley, the only way to access the trail heads inside the park was via shuttle buses. And it was crowded, it felt like school holidays had started already. We learnt from a shuttle bus driver that it is the beginning of spring break which, along with the great weather today, would account for the crowds. Can’t imagine what it must be like in summer.

The Northern Fork of the Virgin River is responsible for shaping the canyon. The force of water over time is awe inspiring. The river was flowing full of snowmelt so a walk up the narrows was not possible. A huge waterfall cascaded over the sandstone cliffs running into the muddy river flow.

A few trails we had planned to hike were closed due to rock falls. We did all the shorter hikes we could today and many were crowded. It felt like being in a theme park at times. We decided to leave the longest and the most popular trail, Angels Landing for an early start tomorrow. 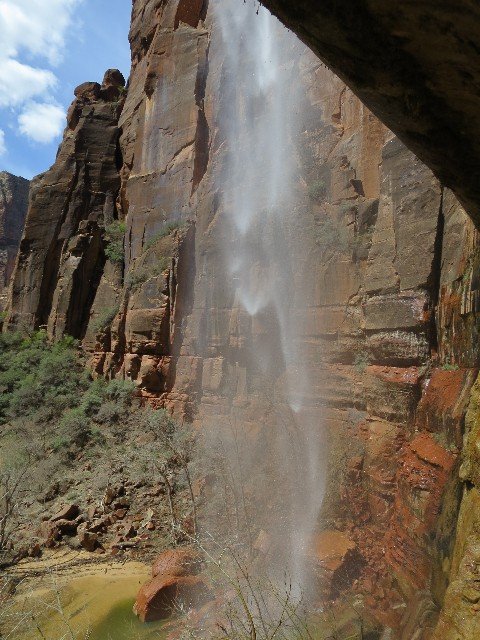 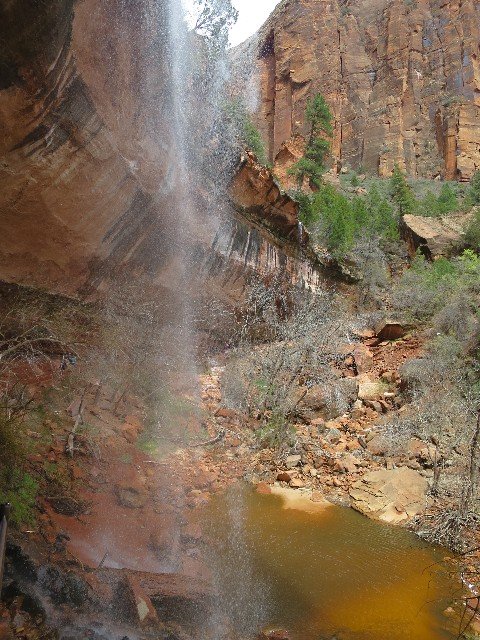 On reflection, the drive into the park from the eastern entrance was far more spectacular than the short hikes we took inside the canyon today. It was an incredible feat to construct this road into the park. A mile long tunnel, the Zion- Mt Carmel Tunnel was cut through the base of a sandstone mountain in the 1920s to provide a connection between Bryce Canyon, the Grand Canyon and Zion.

It was a most spectacular way to arrive in Zion. From the tunnel we descended into the canyon via multiple switchback through the red rock. We stopped quite a few times on our way down and the on the way back out of the park. It was probably the most spectacular part of the day. And seeing the bighorn sheep crossing the road on our way out was a bonus. 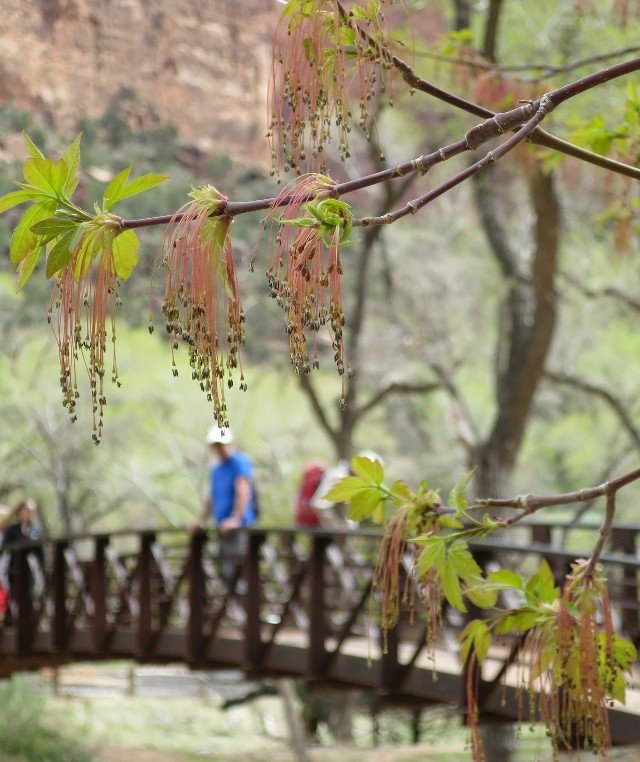 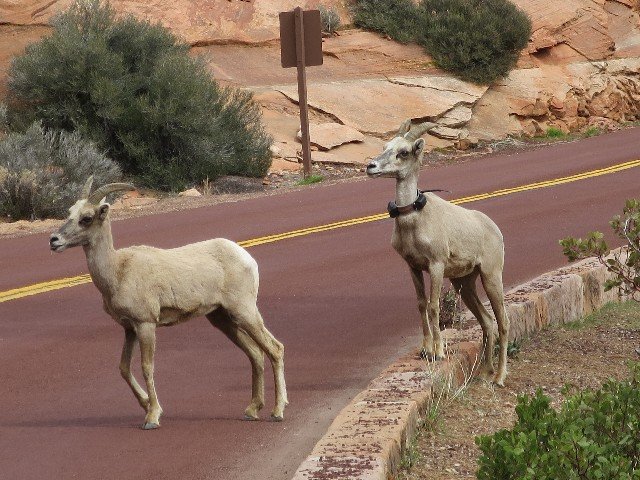 On Sunday we headed back to Zion early in the morning to hike the Angel’s Landing Trail. What a WOW of a day. Clear blue sky framing the red canyon walls was absolutely arresting as we entered the park from the east. We stopped at so many lookouts on the way into the canyon. On such a clear sky it was simply irresistible.

We got onto the Angel’s Landing trail early enough to see deep shadows of the rising sun hitting the side of the canyon walls while we chilled in the cold shadows. The cold did not last as we ascended out of the valley. Even though it was early there were quite a few people heading up and some already on their way down. 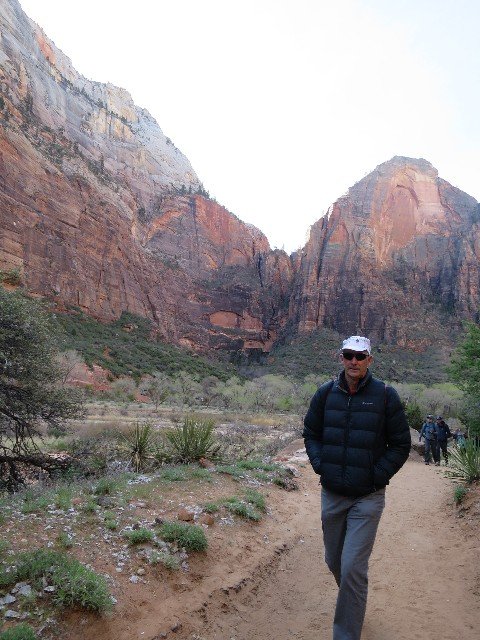 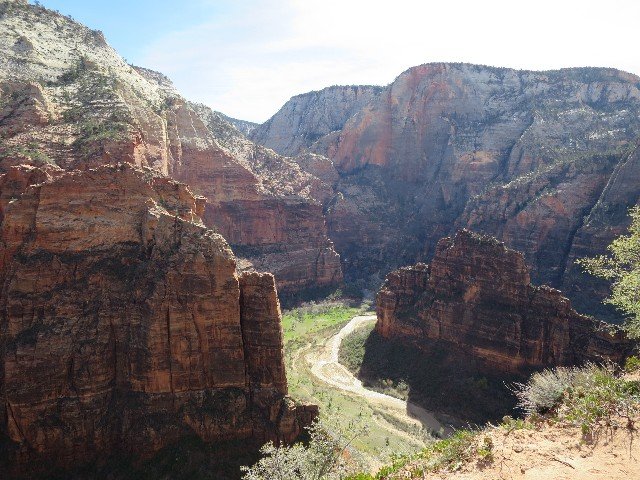 Incredible trail building to make this hike possible. The last section of the trail is a vertical climb on the smooth sandstone walls holding onto chain. By this stage there were so many people trying to head up and down it looked like an ant race. 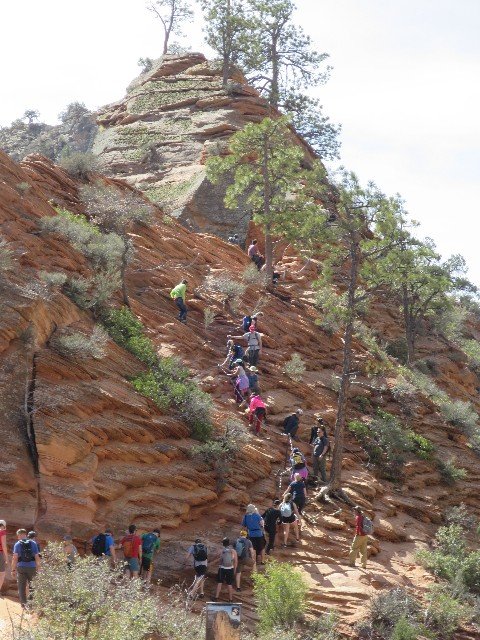 The view from Angel’s Landing provided stunning views up and down the canyon. It is a challenging hike and we are not sure how this last section of the trail remains open. While waiting for Hammer to descent the Landing, I watched a huge Condor swoop over the top of where I was standing. It was a truly awe inspiring experience.

We continued on up the West Rim Trail from Angels Landing, the crowds thinned and the red canyon walls opened up. For us this was the best part of the whole Zion visit. We had a birds eye view of this section of the canyon and a much deeper appreciation of the skills of early canyon explorers. 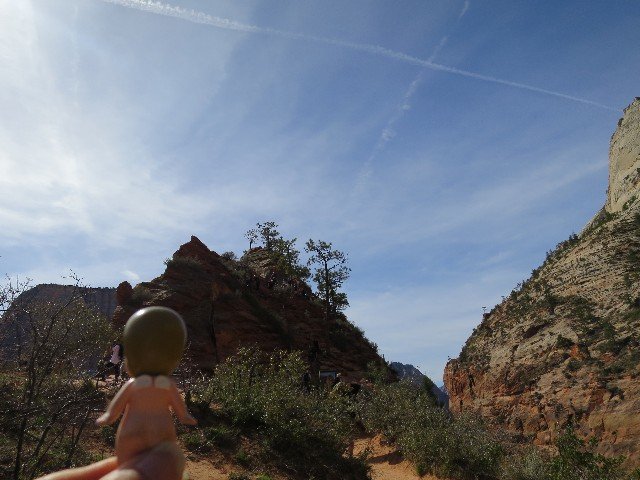 We headed back down to the canyon valley for lunch. We passed hundreds of people heading up. It was a glorious and warm, blue sky day. So good to be leaving Zion on a high note.

After a picnic lunch in the valley we reluctantly drove out of the park and headed east towards Page. Even though we drove this section of Route 89, it was stunning to see the landscape as we descended towards Lake Powell. It was a WOW start and finish to the day.