We left the Mt Field campground early eager to make the most of the beautiful conditions. The sky was clear with a few marshmallow clouds reflected off the huge lake we crossed. No time to stop for photos so a drive by will have to do. 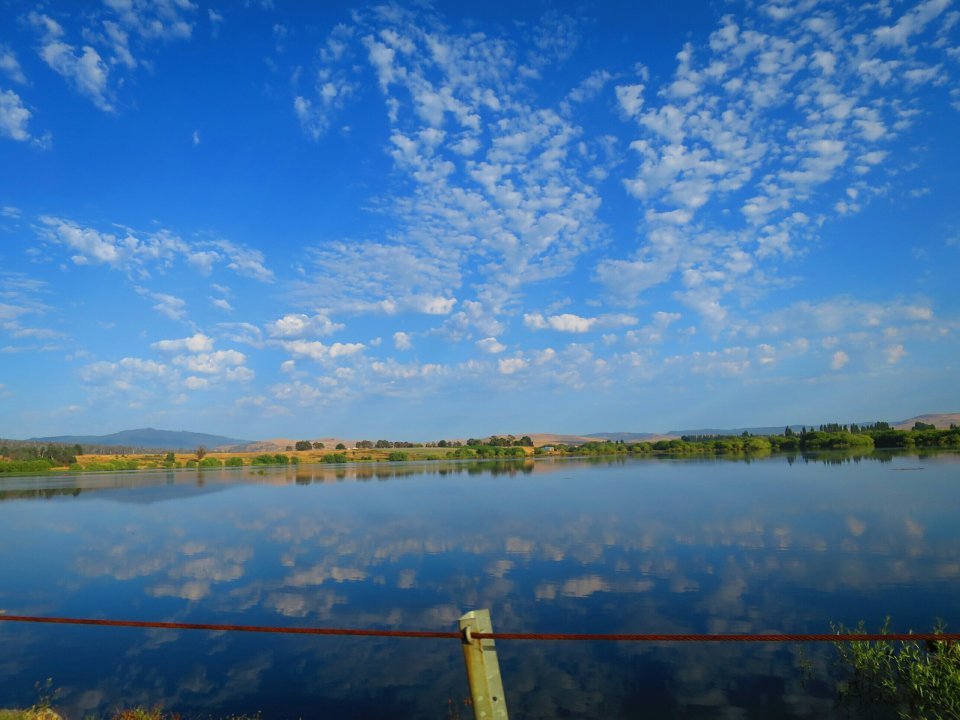 We made it to Cynthia Bay on Lake St Clair and were geared and ready to head out by 10am. It was hot, so it was a relief to have the shade of the forest as we made our way north from Cynthia Bay along the Overland Track. It was nice to be back on this trail and the three and half hours it took us to reach Echo Point seemed to fly by. It took another two slower hours to reach Narcissus Hut.

From here it was almost three hours to Pine Valley Hut. It was almost 7pm by the time we made it to the Hut and the campsites and the Hut were almost full. It seems that the Pine Valley Hut detour has become a lot more popular with Overland Track hikers. We got almost the last spot on one of the camping platforms. Hammer felt fully recovered from the Marathon on Sunday while I was nursing sunburnt legs from yesterdays Tarn Shelf hike 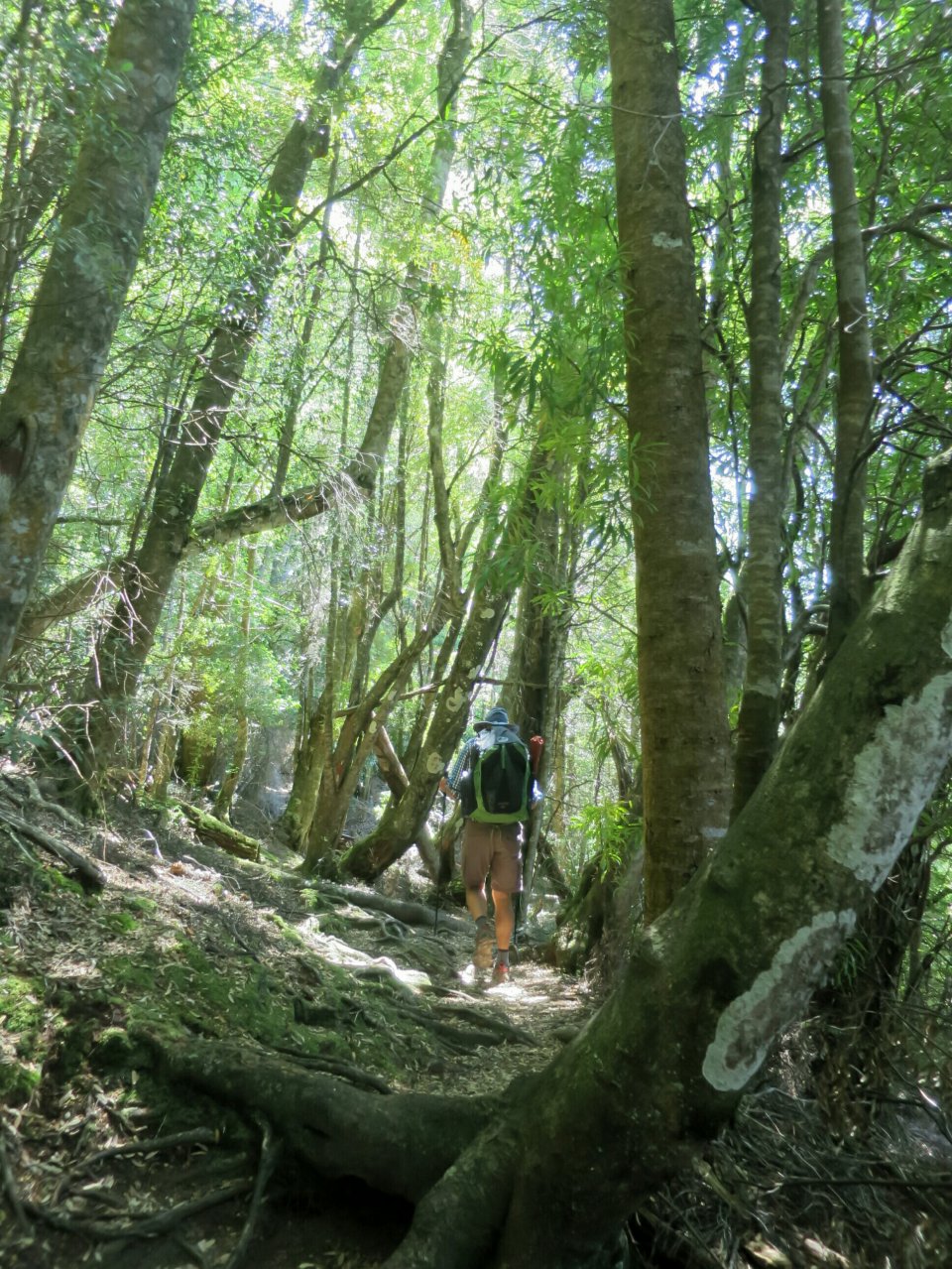 Acropolis and the Labyrinth Hikes

I lay in the tent listening to the early morning birdsong. However the sweet sound was almost drowned out by the buzzing hum of March flies. I lay in my sleeping bag not wanting to disturb the occupants of the other two tents which were sharing the platform. Eventually I made coffee and did some stretches while waiting for Hammer to wake. I have developed a worrying painful left ankle and knee which will need some attention. We planned to hike to the Acropolis and by 7am we were on our way. This trail was all new to us and it was a pretty walk through intensely green and wet looking forest. The best part of the hike was clearing the forest to emerge onto an alpine meadow. The dolerite peaks of the Acropolis towered above us. It was difficult to see how it may be possible to climb to the top. From the meadow it was a steep ascent with the formed trail eventually giving way to a rock scramble. It was a hard slog under brilliant blue sky. The buzzing sound of the flies was driving us mad. And when they landed the bite was intensely painful. Just as well not many managed to land a bite. The views from the Acropolis were incredible – wilderness in all directions as far as you can see. Such an incredible rock formation. 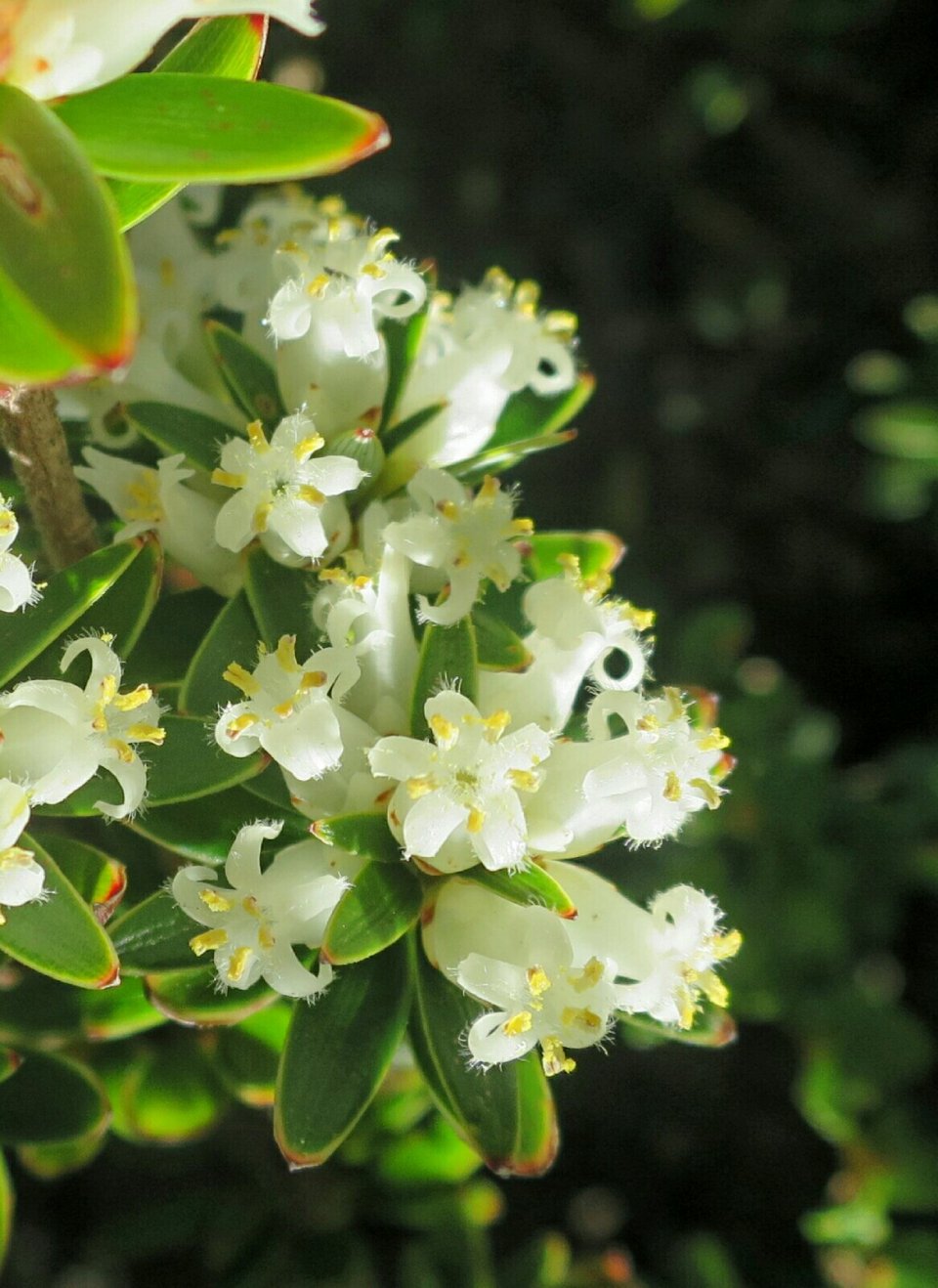 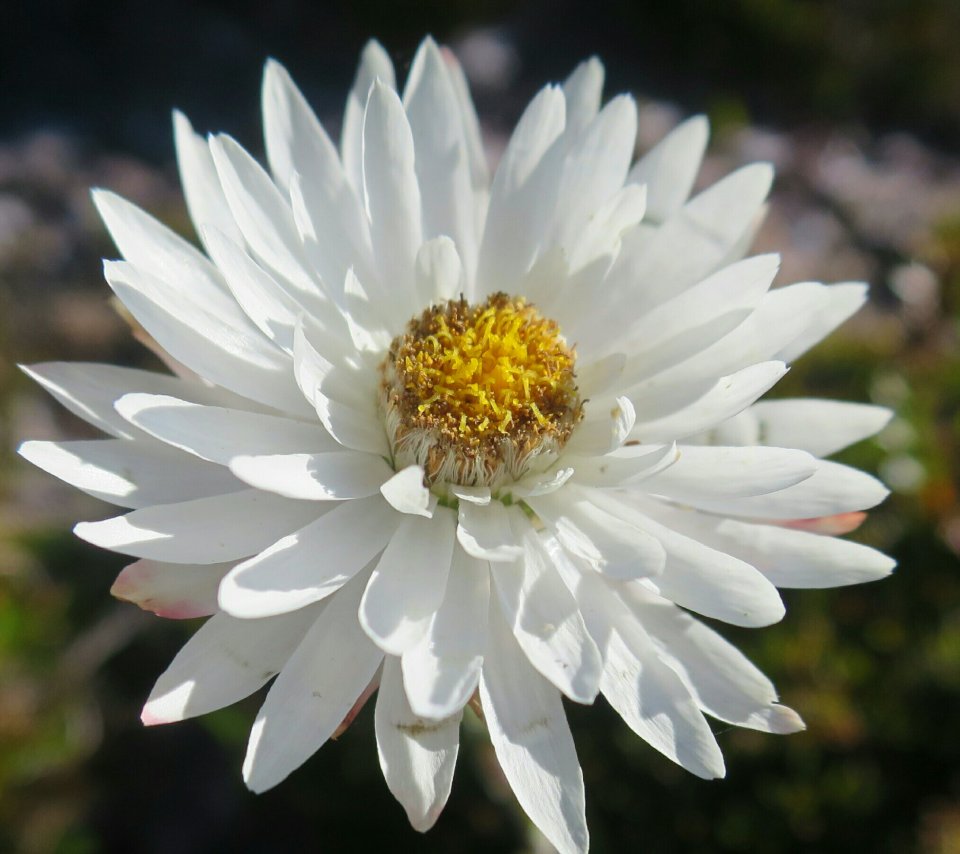 We were back at the hut by lunchtime and took a short break before heading out to hike the Labyrinth track. This turned out to be a far tougher hike then the Acropolis. It was a very steep ascent through a creek gully followed by a flat meadow walk and the a very steep descent to a series of tarns. Tarns are small mountain lakes. In hindsight this was a very tough hike to see the lakes which to us were not as spectacular as the Tarn Shelf we did on Monday. While the tarns were a little disappointing the surrounding mountains more then made up for the views. 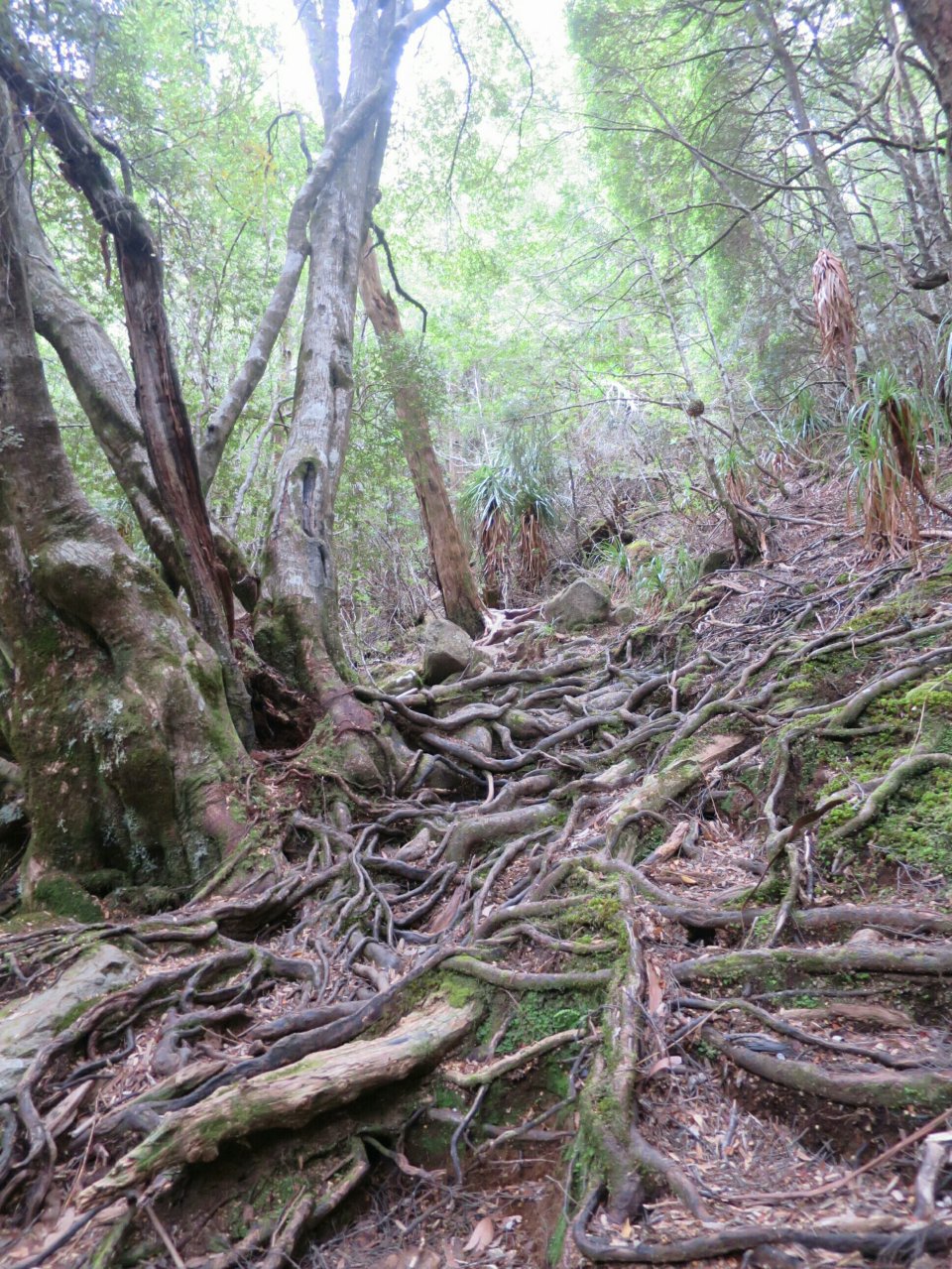 A light drizzle of rain fell through the night and continued to fall while we were breaking camp. Neither of us slept well. Hammer had trouble falling asleep while I had trouble staying asleep. A pounding headache and nausea woke me in the middle of the night. I took painkillers and tried to fall asleep. This did not last, I was woken by an unabated pounding headache and was soon throwing up over the tent platform. Not a good start to the day for either us.
In hindsight, we were probably dehydrated from the two hikes yesterday – both were over relatively hard terrain and it was warm and sunny. Two litres of water each for the hikes was probably not enough on such a warm day. 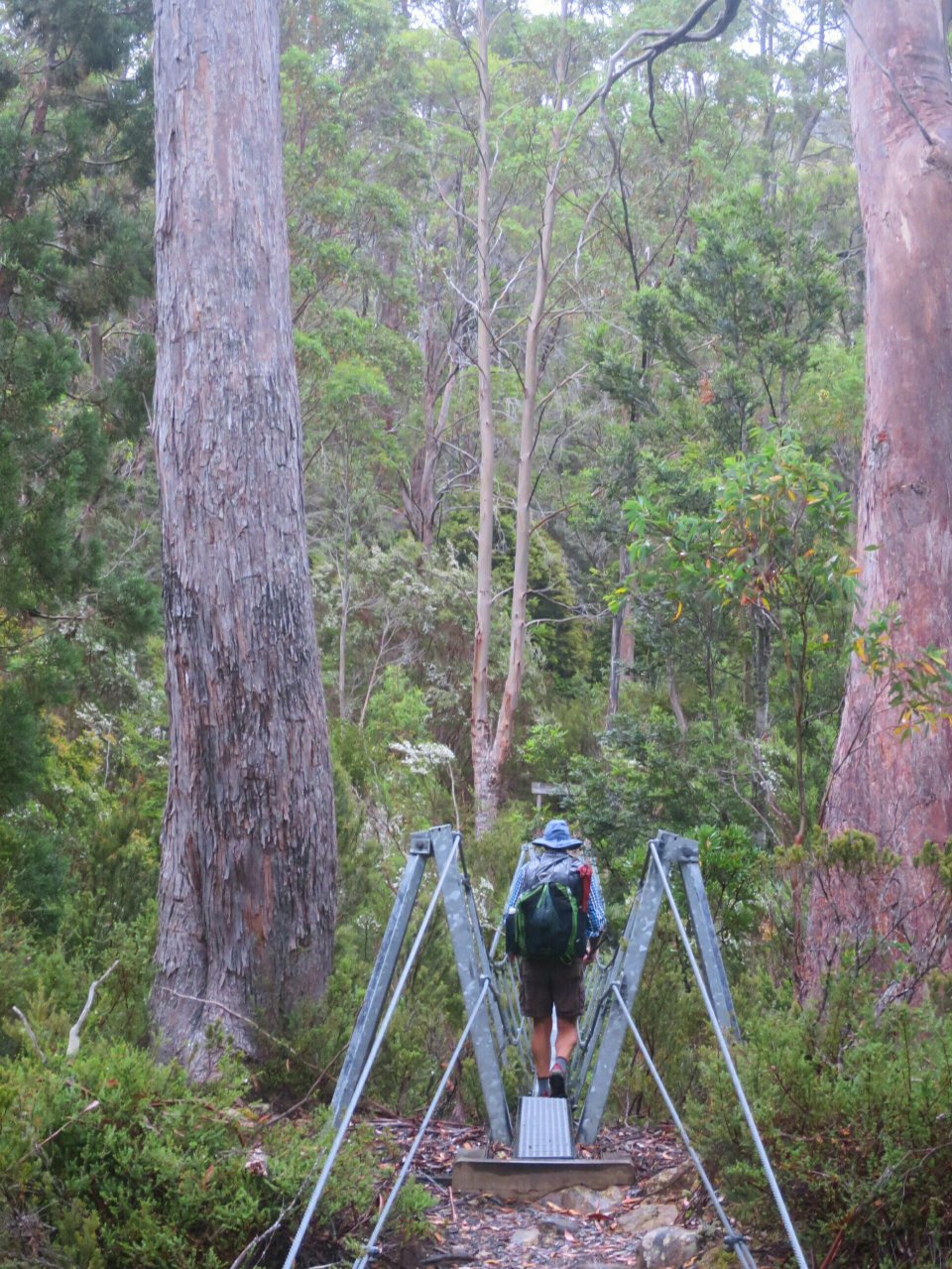 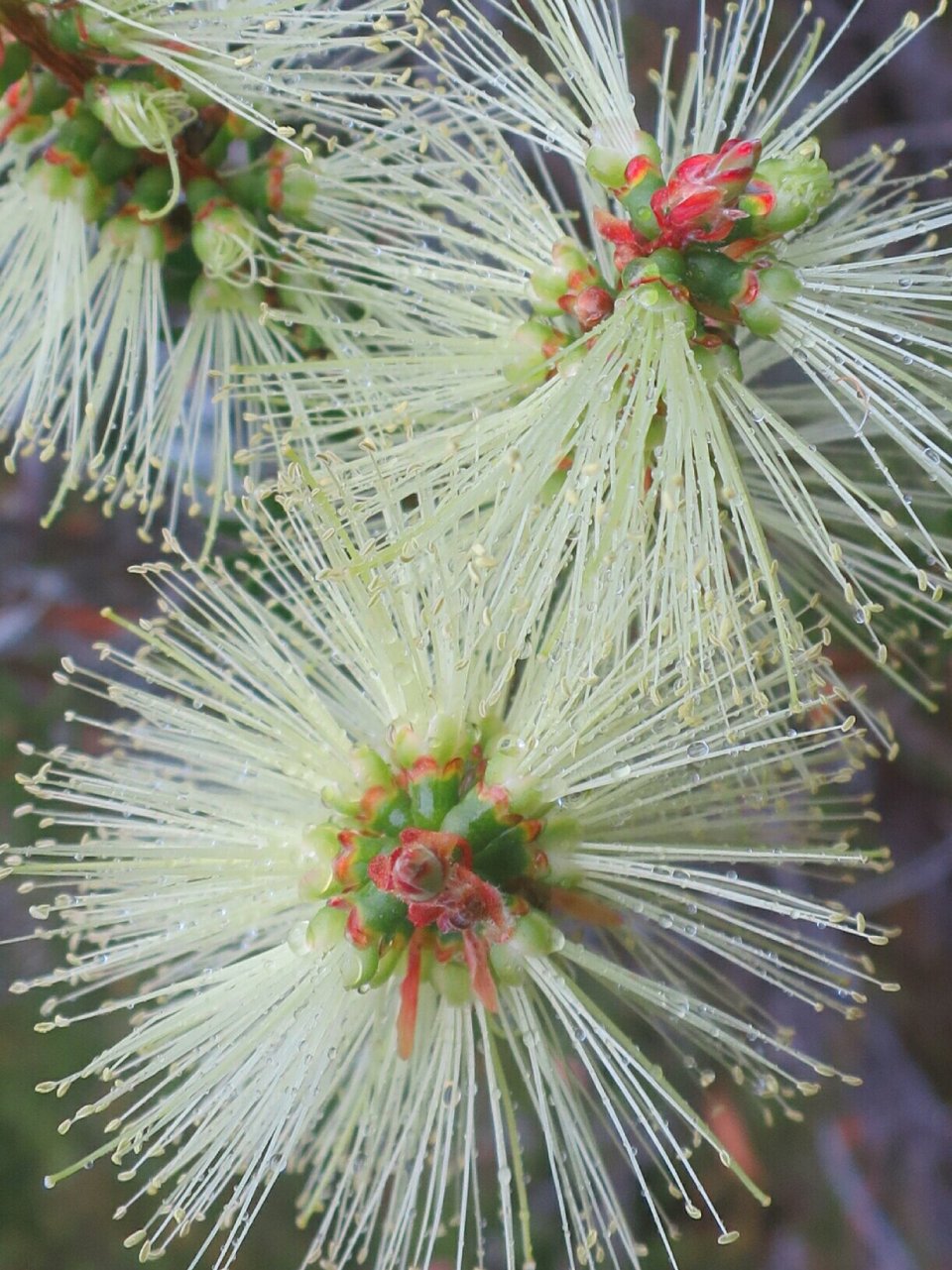 Todays drizzle of rain was a welcomed change for our hike out of the valley. But sadly there was not enough water falling from the sky to provide much respite for the severely dehydrated forest we were walking through. While the forest looks lush and green in the photos, a closer look shows drying mosses on trees and dust underfoot.

We were packed and were off by 7am after saying goodbye to the friendliest ranger . He was very informative about the area we were hiking through and inquisitive about our travels. It was nice to walk in the grey misty gloom. It wasn’t long before we were soaked, not from the falling rain but from brushing past wet vegetation lining the trail. We walked in silence, stopping a few times to take photos of the mist shrouded mountains and leaving the Acropolis behind. We made the trail junction in just over an hour and a further hour and a half we were at Narcissus Hut. There must have been a boat arriving, to ferry Overland Hikers across Lake St Clair to the finish as hikers were rushing around, packing bags and getting ready to leave. We didn’t stay for long, just enough time to have an energy bar and we were off to our next goal – Echo Point Hut. I briefly entertained the thought of getting the boat back but Hammer soon put an end to such nonsense. He reminded me that we were here to get hiking fit. 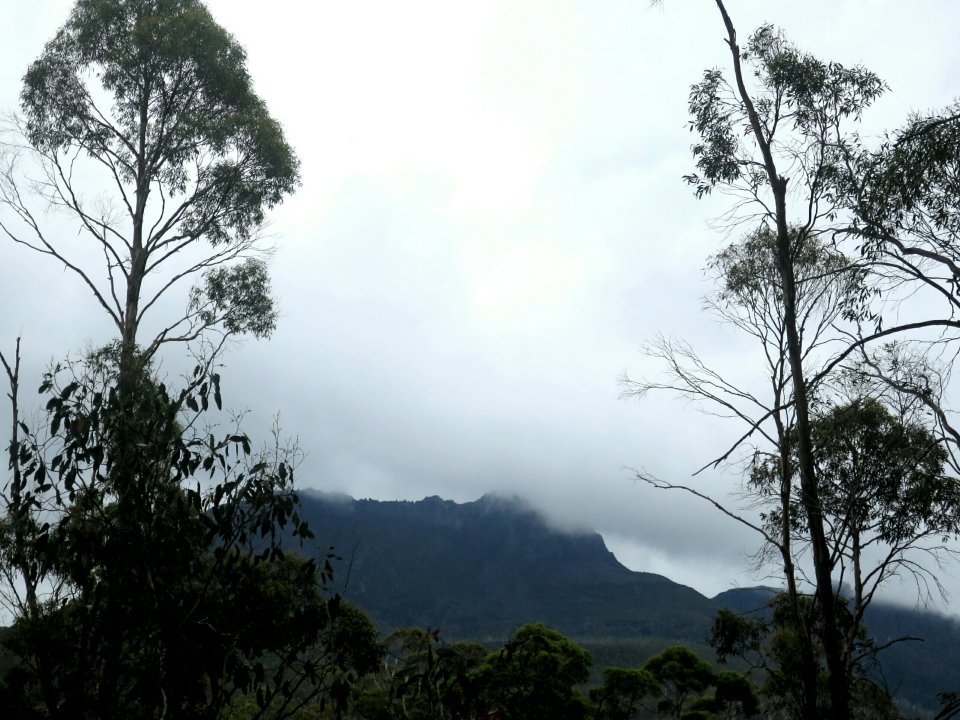 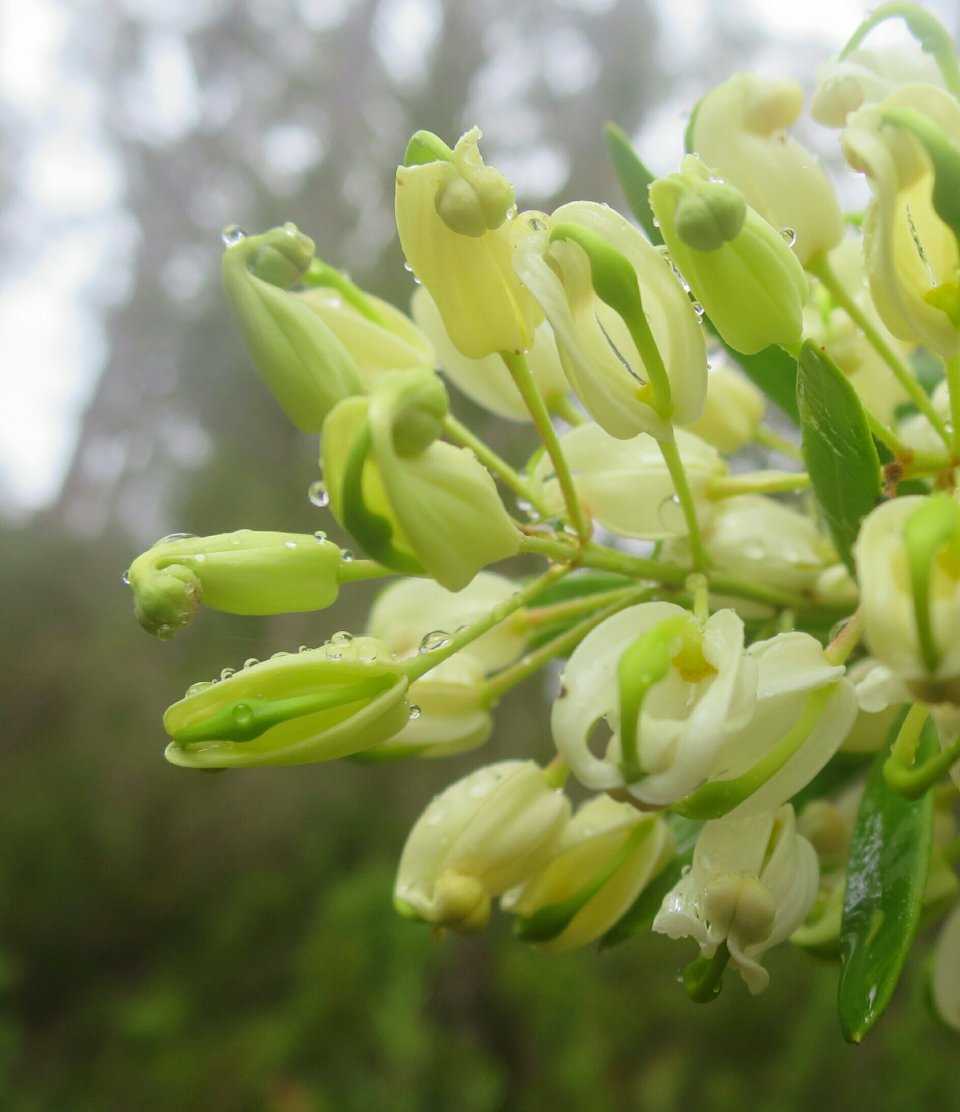 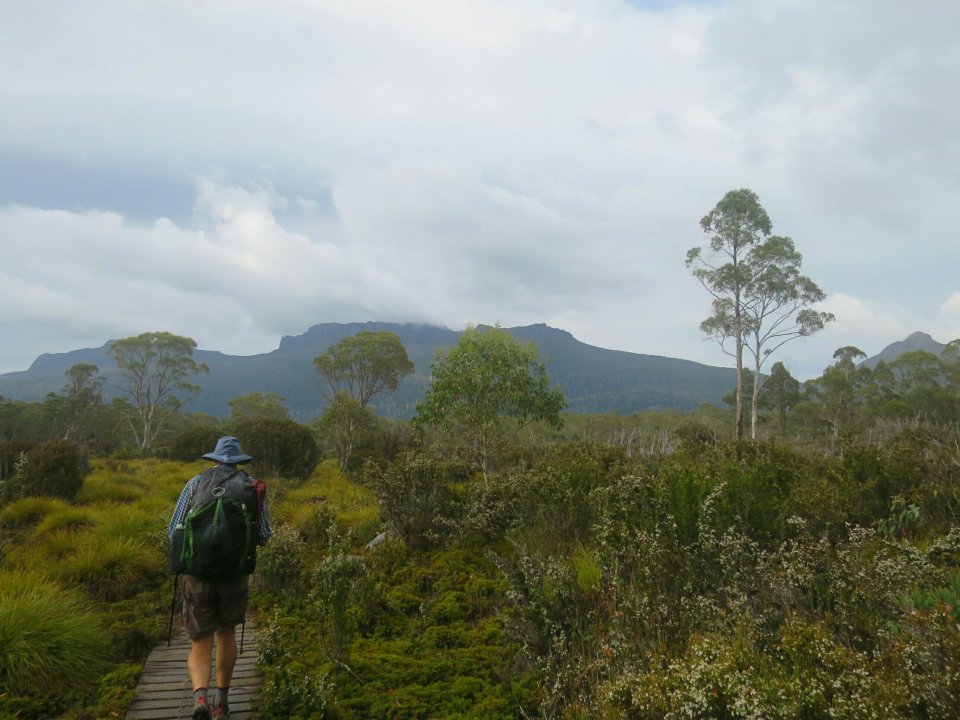 Soon after leaving Narcissus Hut the sun started breaking out and we came upon a small grey snake sunning itself on the boardwalk. It was not moving off the timber and it reared up as we approached, ready to strike. I thought we were a safe distance away but I had forgotten that they can leap great distances, which this one did when Hammer tried to approach it with his hiking pole. I did everything you are advised not to do, turned my back and ran off in the opposite direction. The snake had given us fair warning and then it slithered off into a safe hiding place off the boardwalk. Adrenaline was pumping as we walked over the spot where this little aggressive critter disappeared. 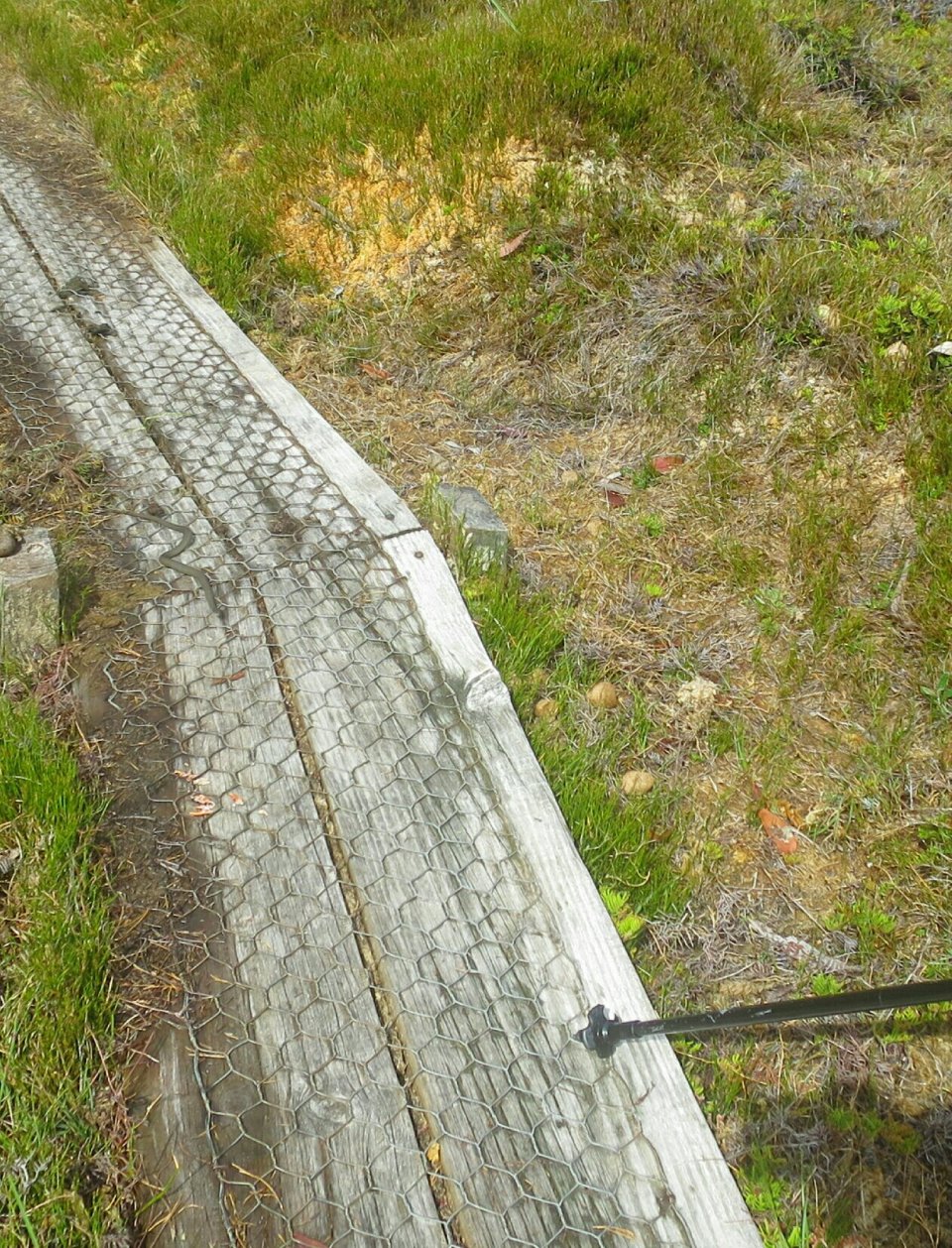 We were soon engulfed by the forest leaving behind the sunshine and the flowers in the meadow. And it stayed like this for the next five hours – until we were almost at the Visitors Center at Cynthia Bay. It was unrelenting, like hiking through middle earth. I had trouble staying motivated and kept looking at my watch every 5 minutes. A recipe for dragging time out. It felt like a really hard slog with not much to take my mind of the slowly ticking clock .There were brief glimpses of the lake, listening to the sound of wind whipped waves breaking on the shore. I reflected on the why – why was I doing this? Perhaps a combination of the seeing and experiencing something new, embracing the physicality of the challenge and silencing the inner voices and working on mental barriers. 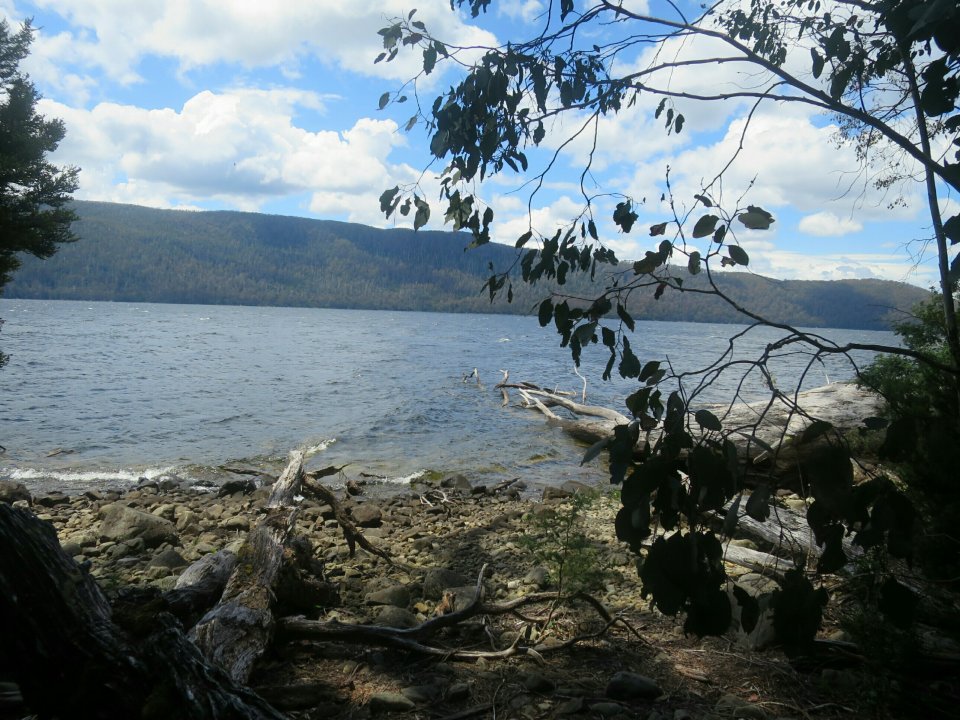 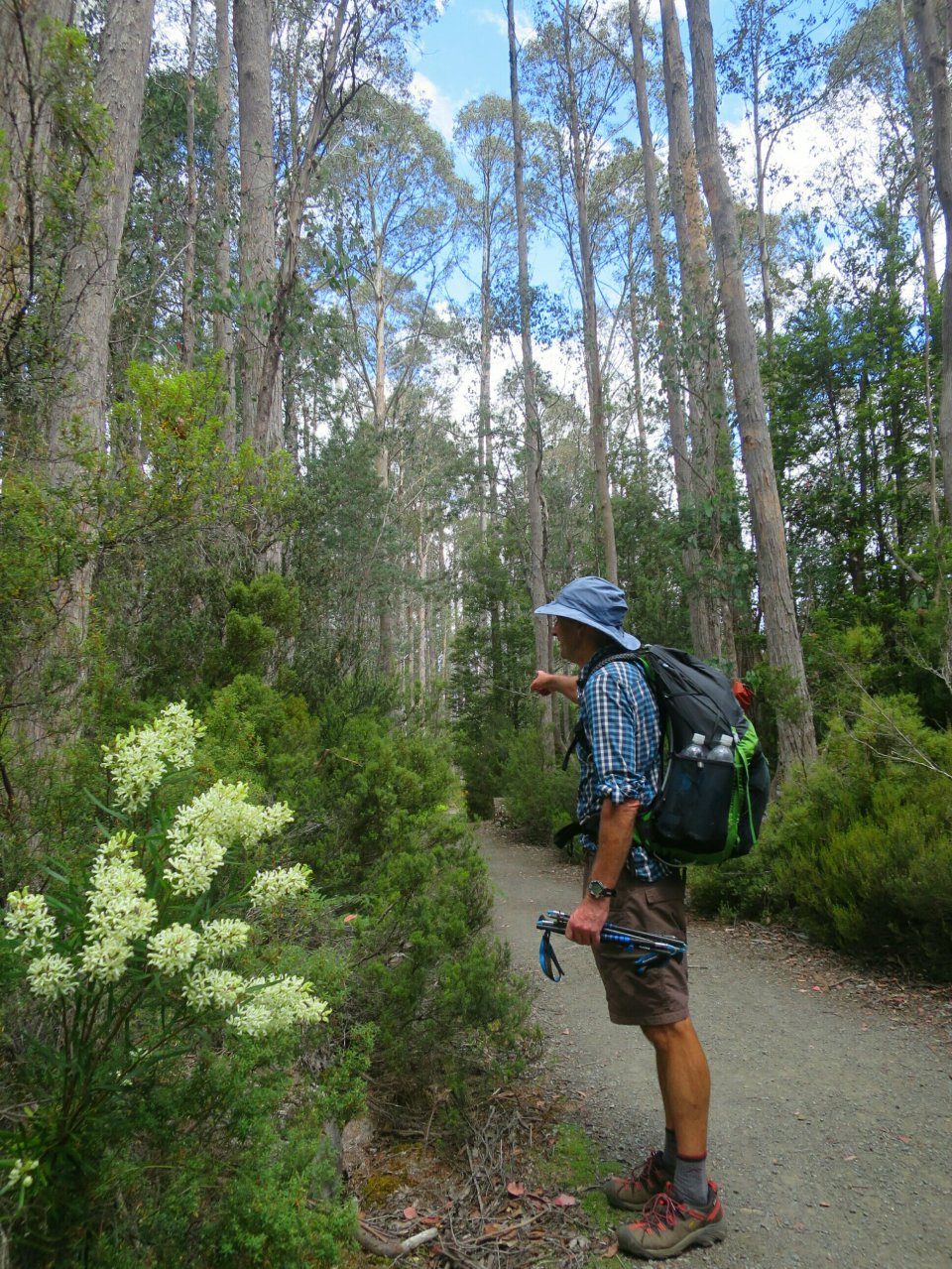 And like most things – it does come to an end. By 3pm the sun was shining we were spat out of middle earth and into tourist town of Lake St Clair Visitors Center (although very small scale tourism compared to the other end of the Overland Track near Cradle Mountain). We were lucky to find a friendly ranger who let us use the showers at the Visitors Center even though it was 5 minutes after showers were closed for cleaning. We were not so luck at the nearby by Hungry Wombat Café at Derwent Bridge. Arriving at 4:04 we were be told that the kitchen closes at 4:00 and she (the owner with a very sour disposition) couldn’t find a crumb to spare. We could buy a cold drink from the fridge if we liked – so generous! There wasn’t much else to choose from at Derwent Bridge and we did not want to wait till after 5 for the pub to open to have a meal. .We didn’t let the Hungry Wombat experience to spoil our day, we drove on towards Hobart stopping at the lovely Bradys Lake Whitewater Point Campground. It was a great spot which was surprisingly quite considering it was still school holidays. 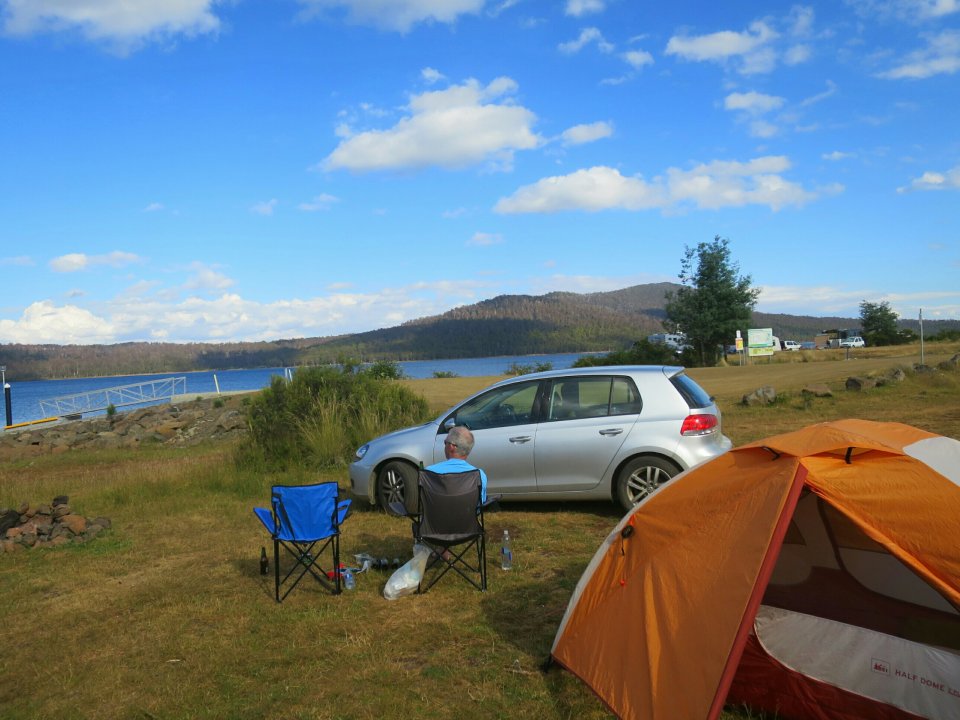