Franklin River is the first river on track that has a reasonable flow. It was beautiful to walk in the predawn silence to the sound of flowing water. It wasn’t long after leaving camp I crossed Sappers Bridge. Hard to believe looking at it now that in heavy springtime rain the river can overtop the bridge. It rains a lot in these parts.

As I started to leave the river behind I could see a glorious sunrise was about to unfold. And so it was, except that today it was followed by blue sky. So wonderful to be surrounded by huge trees watching the sunrise.

One of the features on the section of trail to Giants camp is the Treetop Walk tourist attraction. I got there just a bit before it opened at 9am and there were cars already in the carpark. The walk is a 600m long platform suspended through the forest canopy. I just couldn’t do it. It has been such a beautiful quite morning. I didn’t want that broken by following a group of people around. I headed back into the forest and continued on my way, wanting to make the most of this beautiful sunny day that was unfolding.

I saw quite a few more incredibly shaped tingle trees. Their broad base reminded me of boab trees but they taper away from the bulbous base. The peaceful morning was somewhat broken by the sound of gunfire somewhere in the distance to my right.

The trail was quite undulating which came as a surprise after the flat terrain of the past few days. It was such a beautiful day I began to wonder if I will ever leave the forest and the tall trees so that I could feel the sun on my back. And pretty soon my question was answered. I crossed the South Coast Highway and the vegetation changed completely, just like that. I’m out of the ancient forest and back to flowers, bottlebrush and burnt marri trees. I couldn’t believe how sudden the transition occurred.

I stopped to take pictures of plants I’ve already seen, including my now favourite orchid. It was like a reunion. 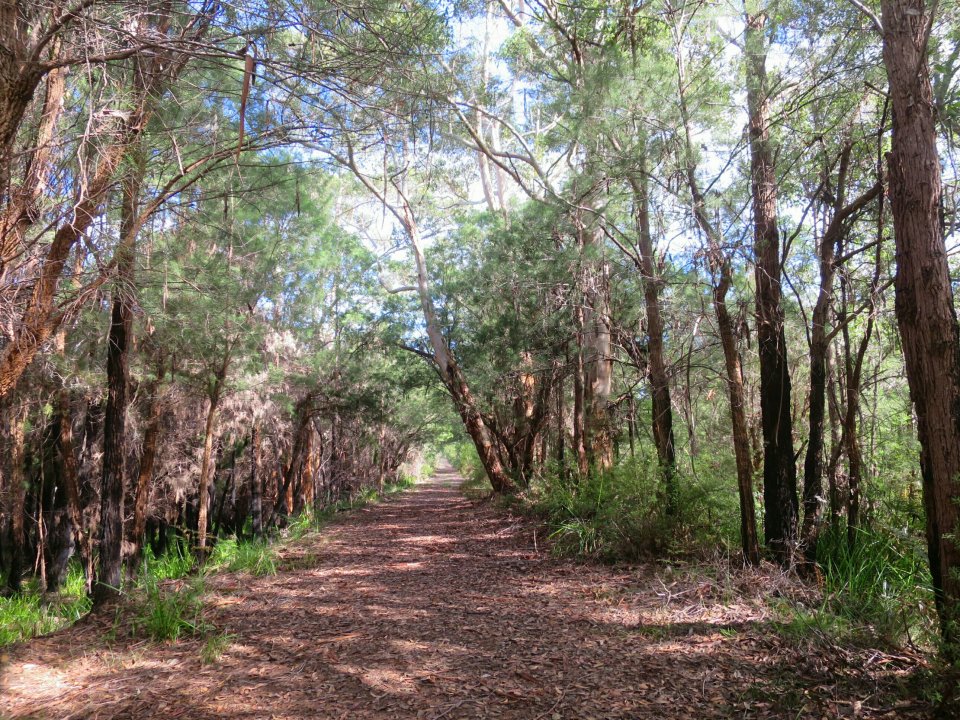 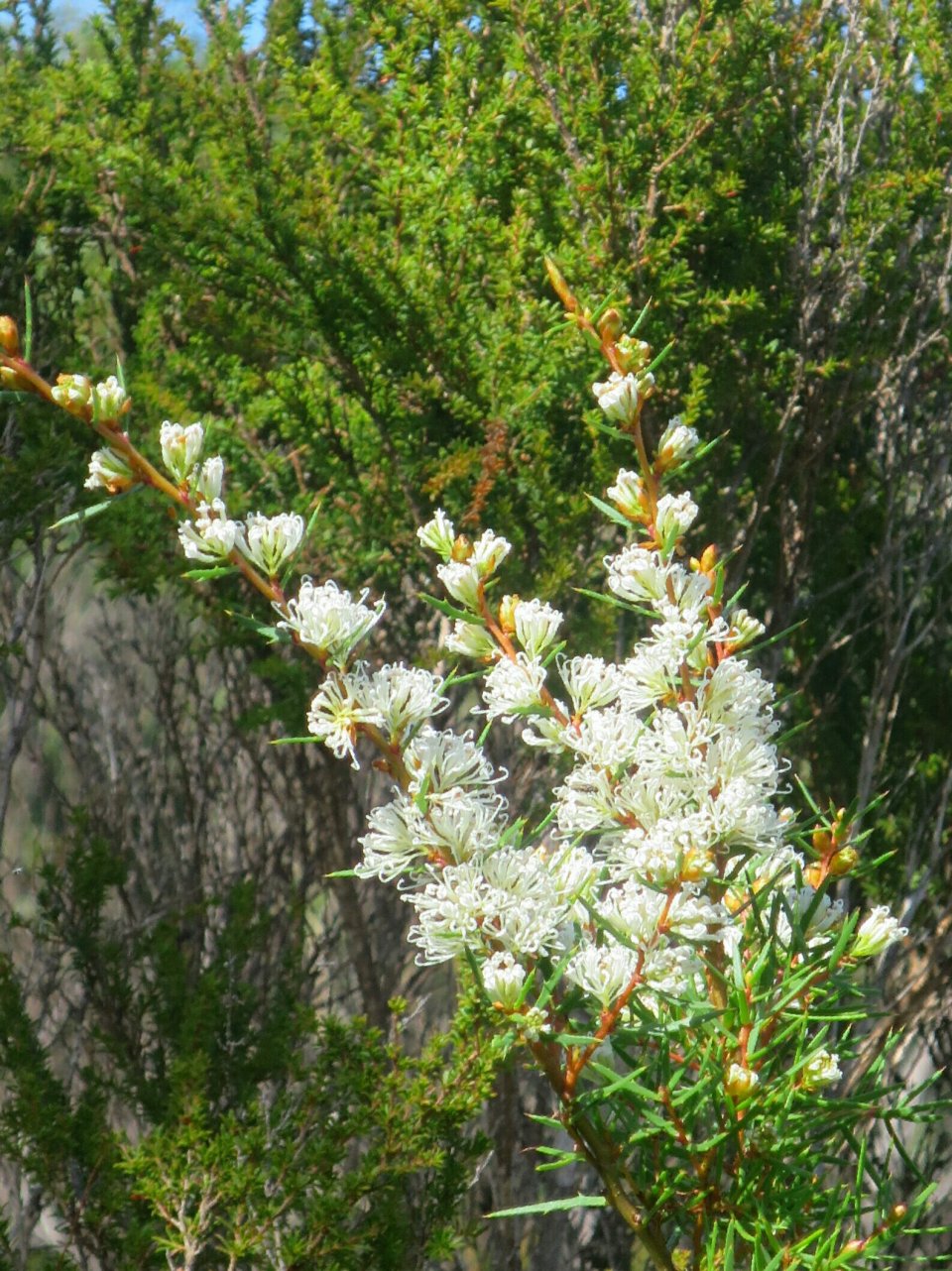 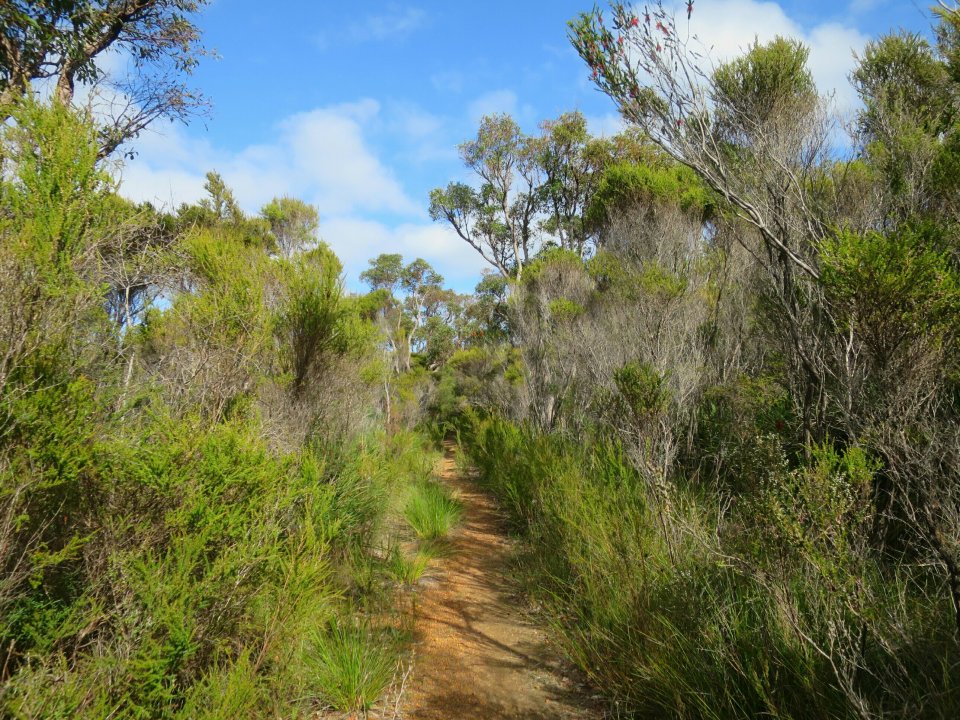 The trail ascends along some private property towards a lookout. And there was the coast again. This time I’ll be following it all the way to Albany. At the lookout I met a Eric a northbound e2e hiker. He grew up in this area and has always wanted to hike the Bibbulmun. He seemed very relaxed and happy to single hut his way to the Perth hills.

From the lookout the track meanders up and down and over vegetated dunes and finally reaches the sea at Conspicuous Cliff for the first bit of beach walking. The colour of the sea was an incredible clear icy blue especially so because of the the white sand. The sound of breaking waves was deafening. It was a georgeous sunny day and I was by the sea The gloomy rain of a few days ago seems like a forgotten dream.

Further to the south I could see smoke – the prescribed burn, on the section of trail approaching Walpole from the north, was finally happening. The smoke was drifting out to sea and will make for a spectecular sunset.

From the beach there was quite a bit of slow going sand dune walking before reaching Rame Head camp. At one point I came upon a wallaby with a little joey just lying down across the trail. It seemed reluctant to move. I wasn’t sure what to do. I edged closer calling out to it, eventually it got up scratched itself and moved just off trail. Such a beach bum, I should be doing the same on such a glorious day. 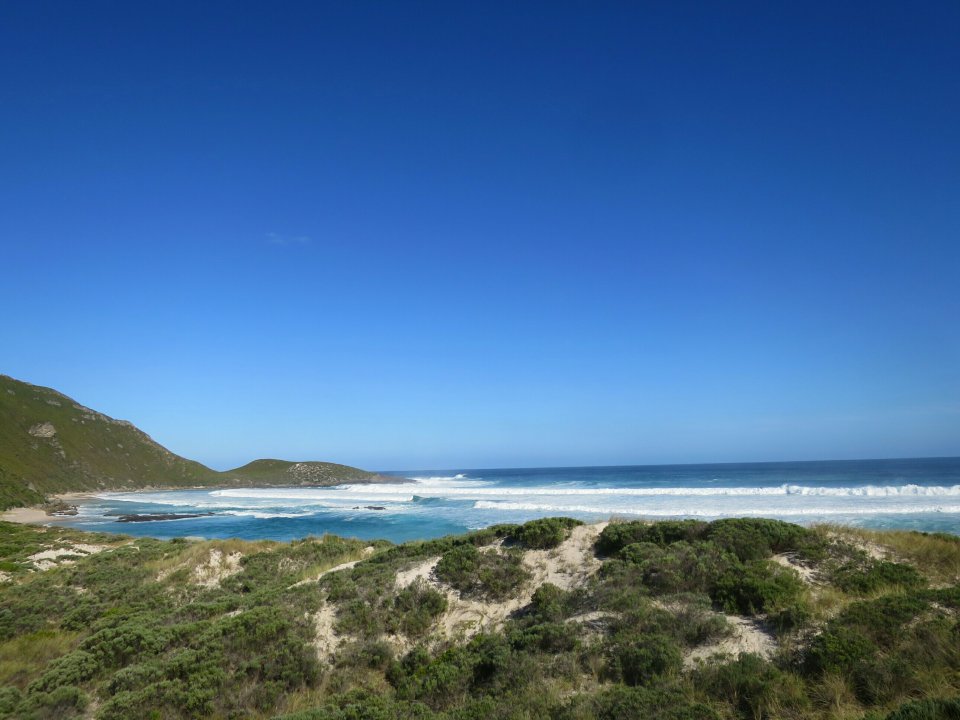 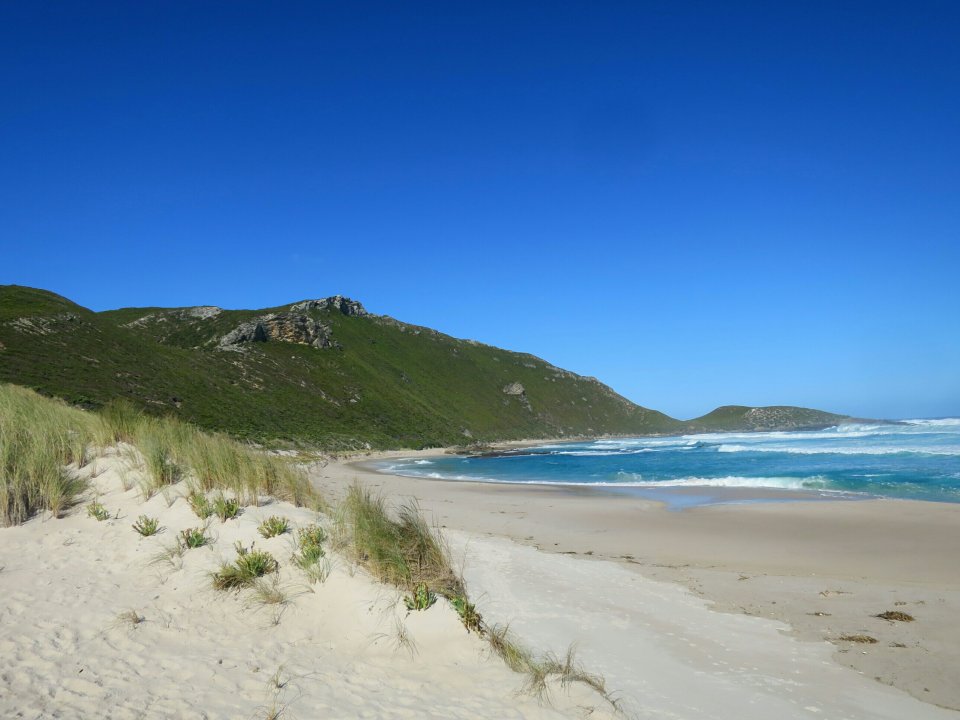 Just before reaching camp I met Mary and Stewart who are track volunteers doing some maintenance work. They were taking a break because of the heat but will be joining me at Rame Head camp as well.

I got to camp which is located away grom the coast but with great views out towards the sea. I set up my tent and was about to start dinner when Mary and Stewart came in. It was lovely to chat to them while having my early dinner. However there was a little bit too much talk about snakes for my liking.

And just as I was finishing dinner we were joined by a northbound e2e hiker Barbara (trail name Wanderer), a German who is on a long sabbatical holiday. Just as the sun was disappearing behind us I looked out from the shelter to see a most spectecular moonrise over the ocean.

My cup of happiness was pretty full. I retired to my tent. Feels so unreal, last night I was camped in an ancient forest with the sound of a flowing river and now I’m going to sleep with the sound of pounding waves of the Southern Ocean. 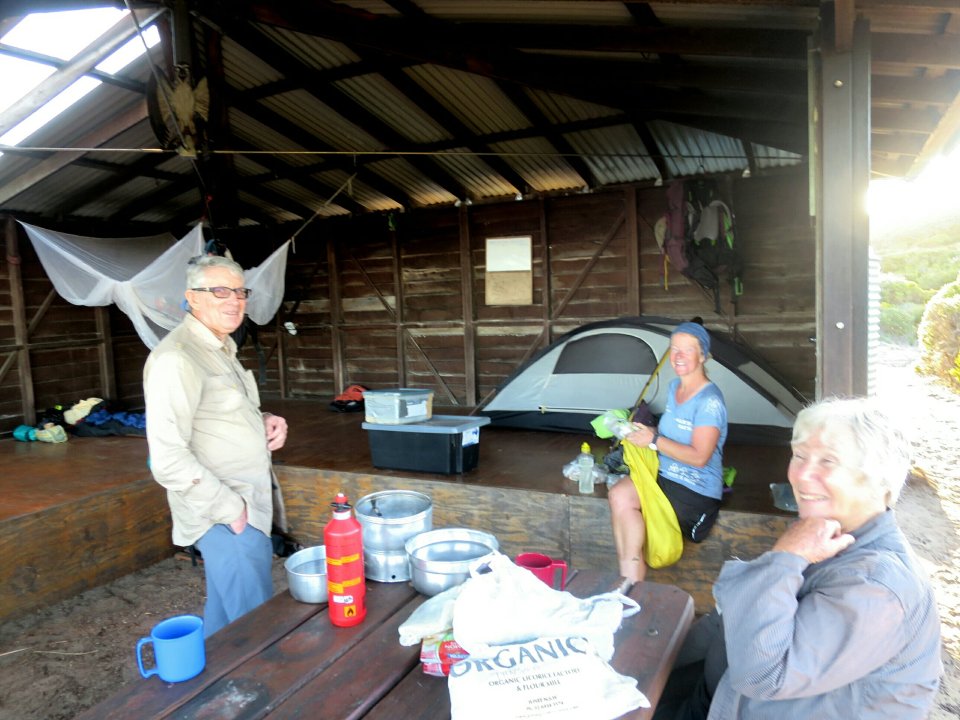 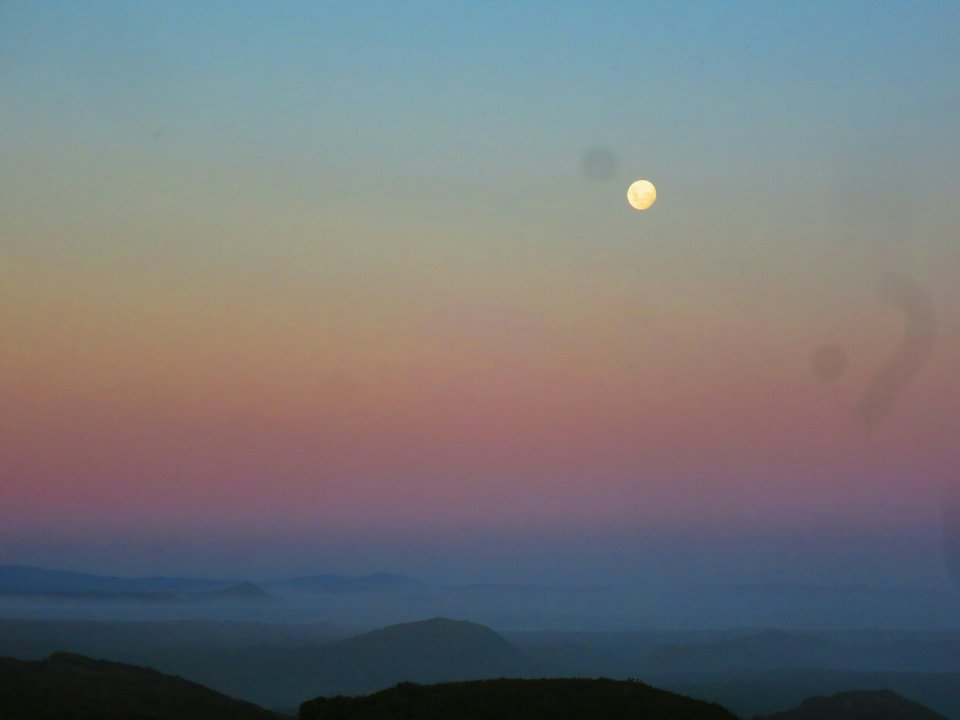