PCT DAY 31: Wednesday July 26, 2017
Mile 2226.4 – Mile 2246.6
20.2 miles ( 32.3km)
Today Washington really turned it all on. The glimpses of snowy volcanic mountains that I have been approaching up until now were on full display at various points through the day.  And the wildflowers, I don’t know where to begin to describe the splendour.

I woke up at my usual time even though there was no need to get up early. The cafe won’t open till 7 and Garry, our Trail Angel,  was going to meet three of us to take us back to the trailhead after breakfast. Nevertheless I was packed and ready to go at 6am. It was nice to wander around town early before any activity starts. 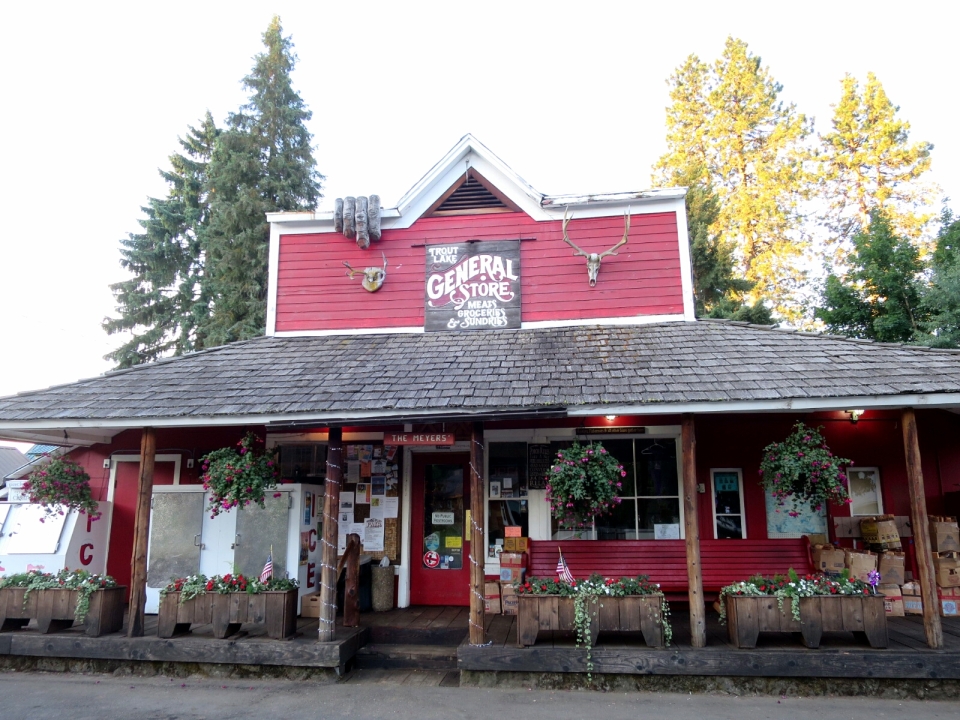 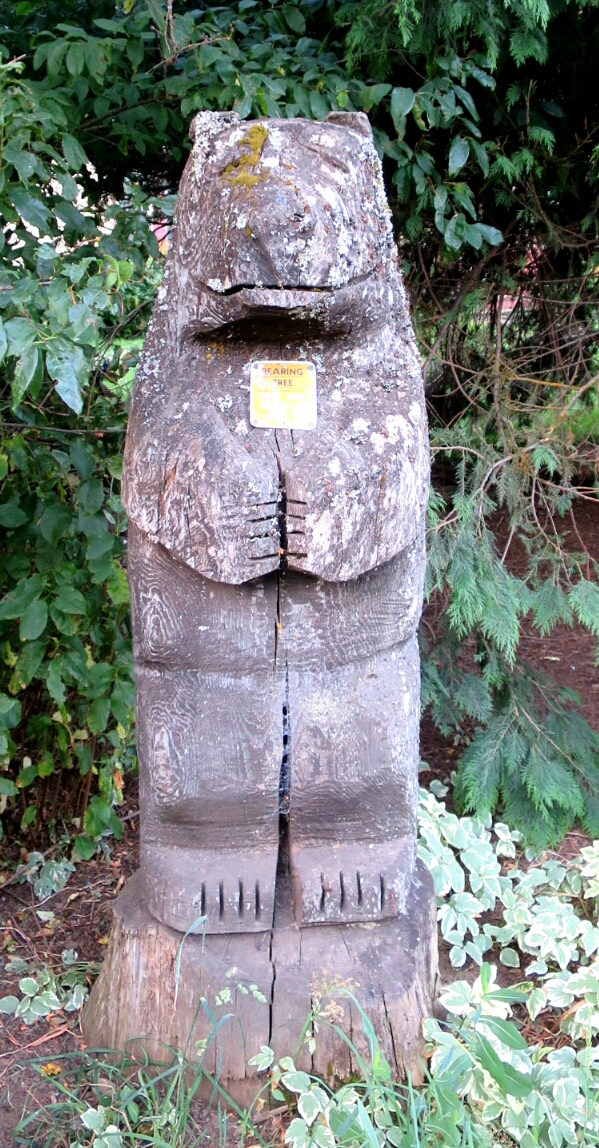 Eventually the cafe opened, and quickly it started to fill up. I had breakfast with Trailmix and Leafy who are both south bound through hikers, and Dave from Seattle who was camped at the same campsite I was at, the night before. Dave is northbound through Washington but is staying on in Trout Lake  to heal some blisters. The rest of us are back on trail.

I’m not sure that this gas station cafe breakfast was worth the sacrifice of early morning trail miles. With full packs, Garry drove us the 14 miles back on trail. I said goodbye to everyone and was back in the forest at 9am. 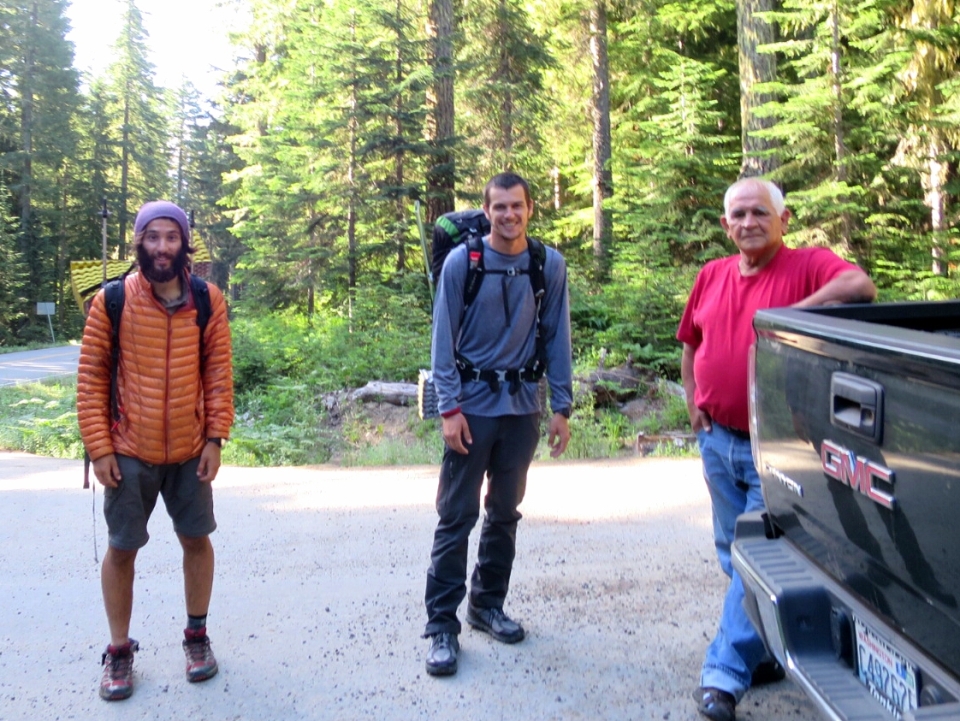 As soon as I started walking away, I felt quite a strange sadness. Not sure if its because I was alone or because I was back in the forest.  The feeling did not last nor did the forest.  Within a few miles the trail passes through a 6 mile climb through a burn section, within the Mt Adams Wilderness area. And it was through this burn section that wildflowers started to appear. It was a riot of colour as I started to approach the  south face of Mt Adams. 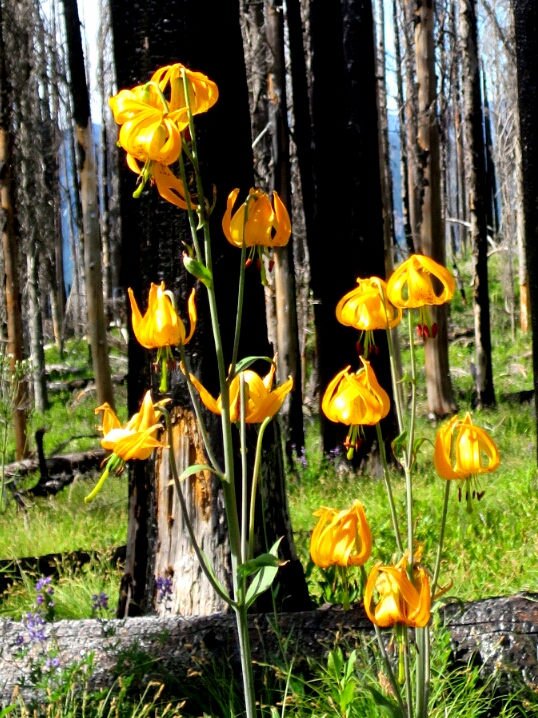 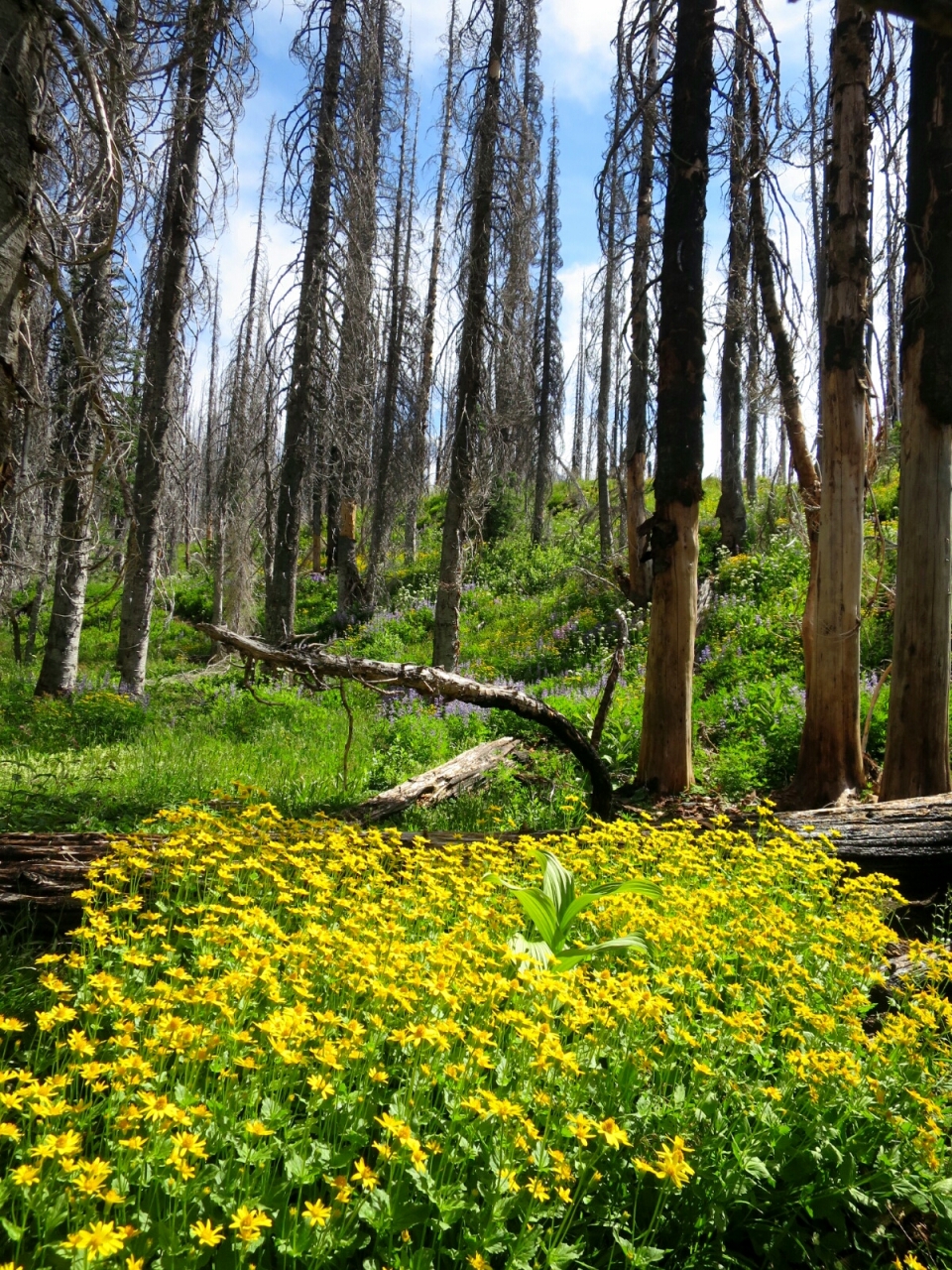 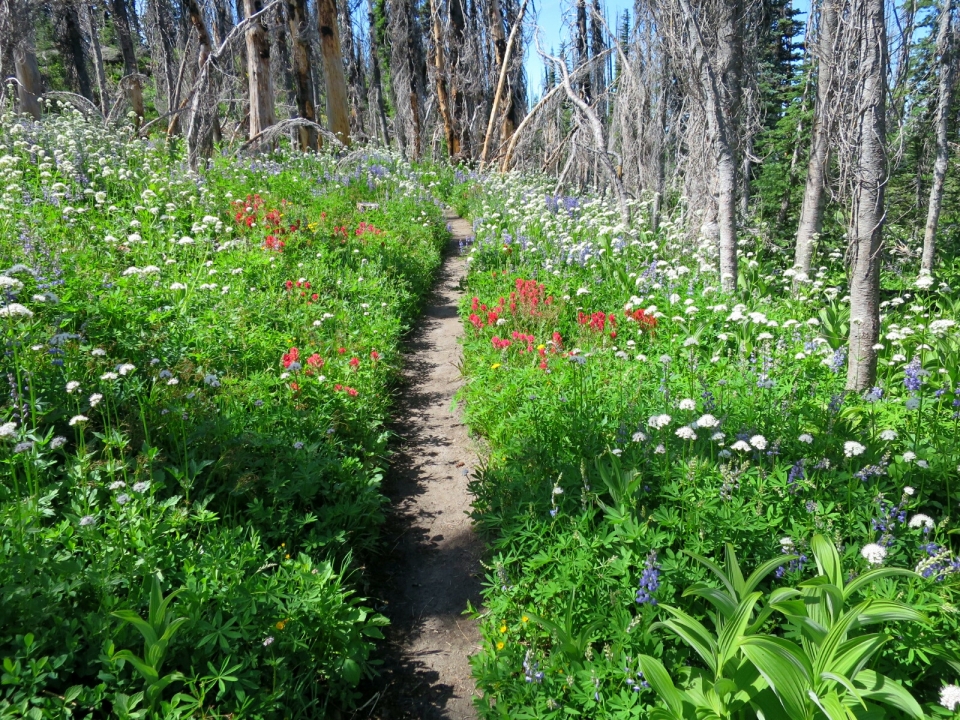 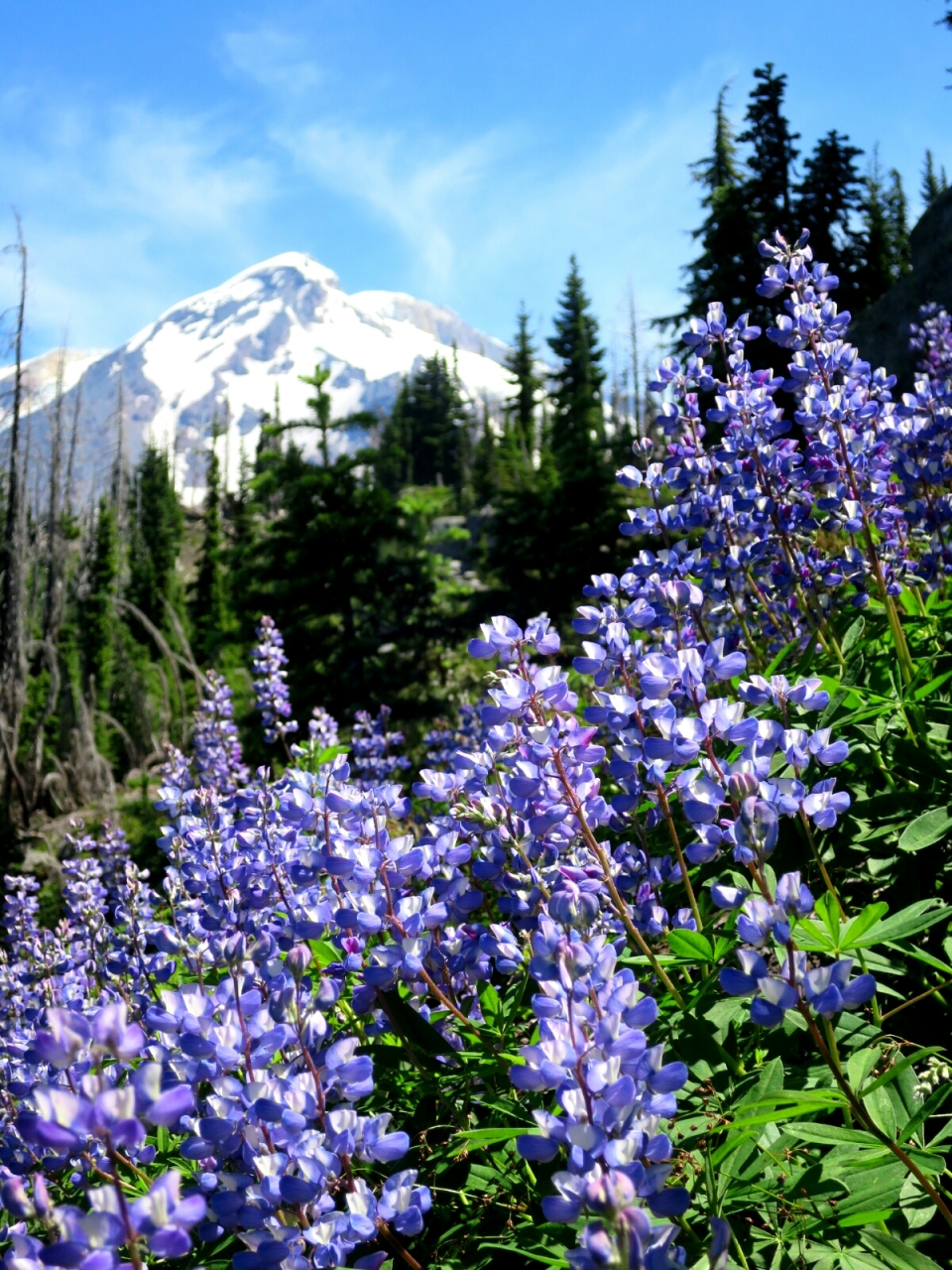 Finally Mt Adams  was in full view. And it looked like the trail was going straight up its side. It was only near the top of the climb that Mt Rainier could be fully seen and the distinctive cauldera of Mt Saint Helens.  I remember the Mt Saint Helens eruption in the early 1980s. Hard to believe when you look at it now. 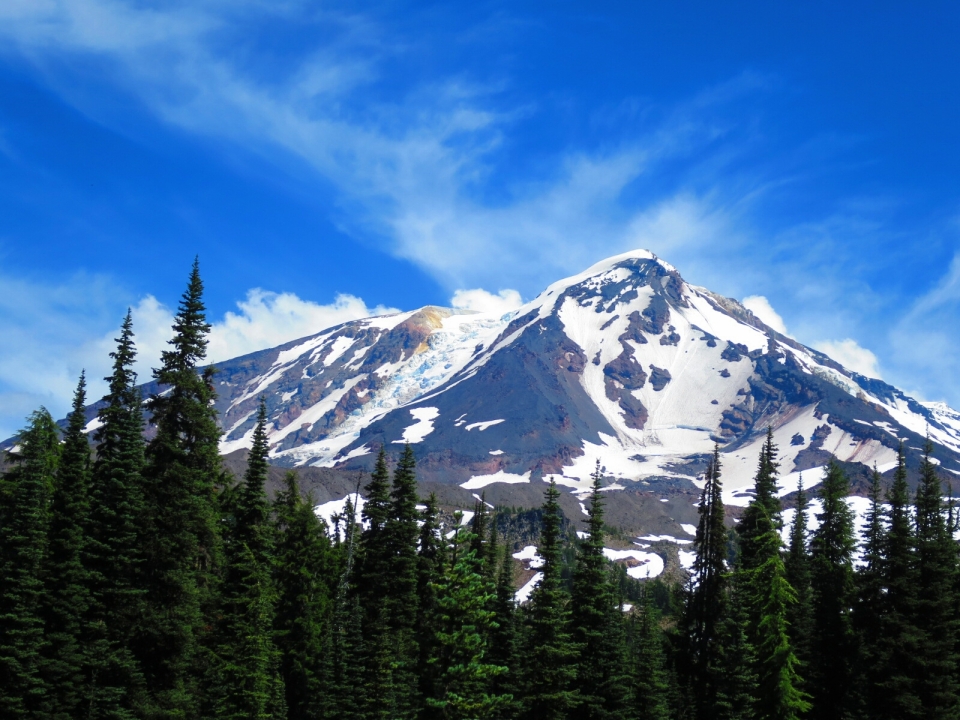 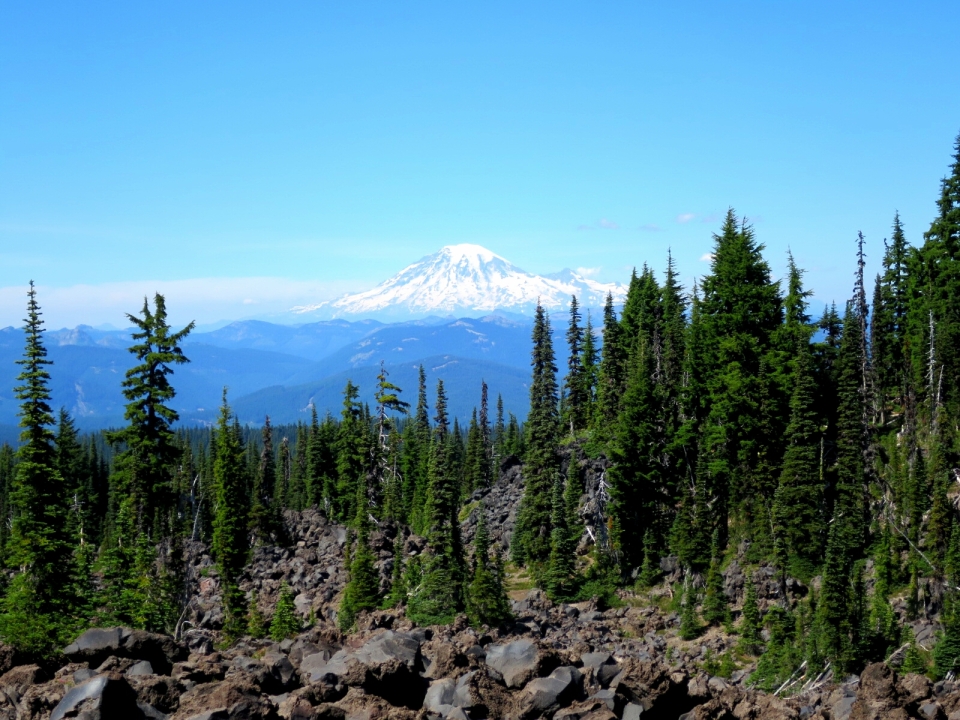 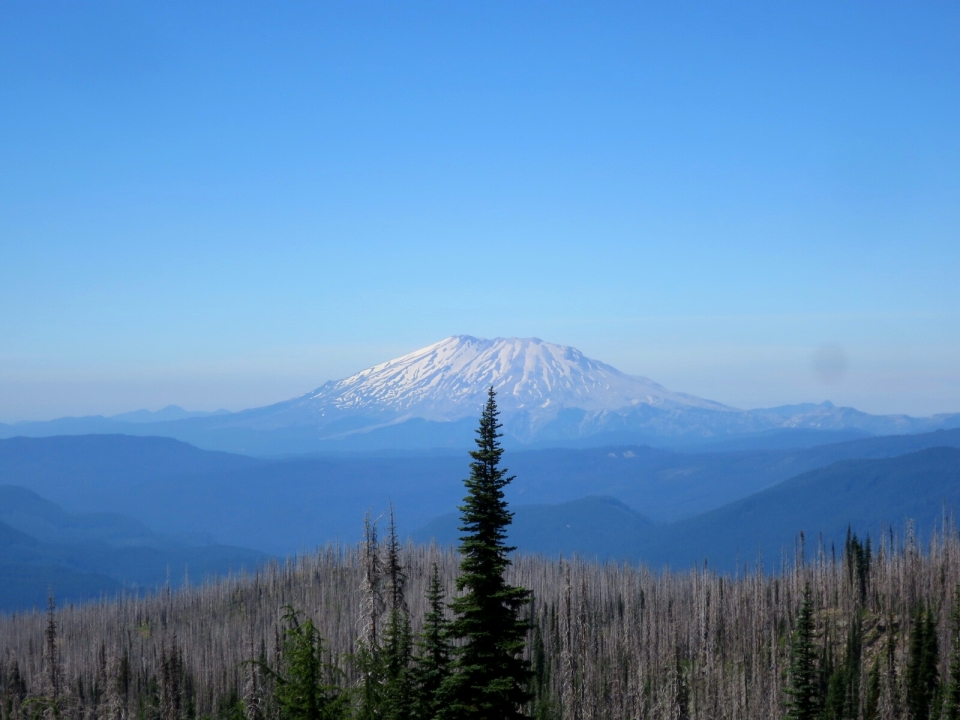 I was a little bit overwhelmed by having so much to look at after spending so many days in a forest. It was a feast for the eyes.  I stopped so many times distracted by the flowers that I just could not go by without taking just one more picture.  The trail diverts along the west face of Mt Adams and for most of the rest of the day I had a changing view of the mountain. The glaciers on its northwest face looked incredible, the dark blue ice glistening in the afternoon sunlight. 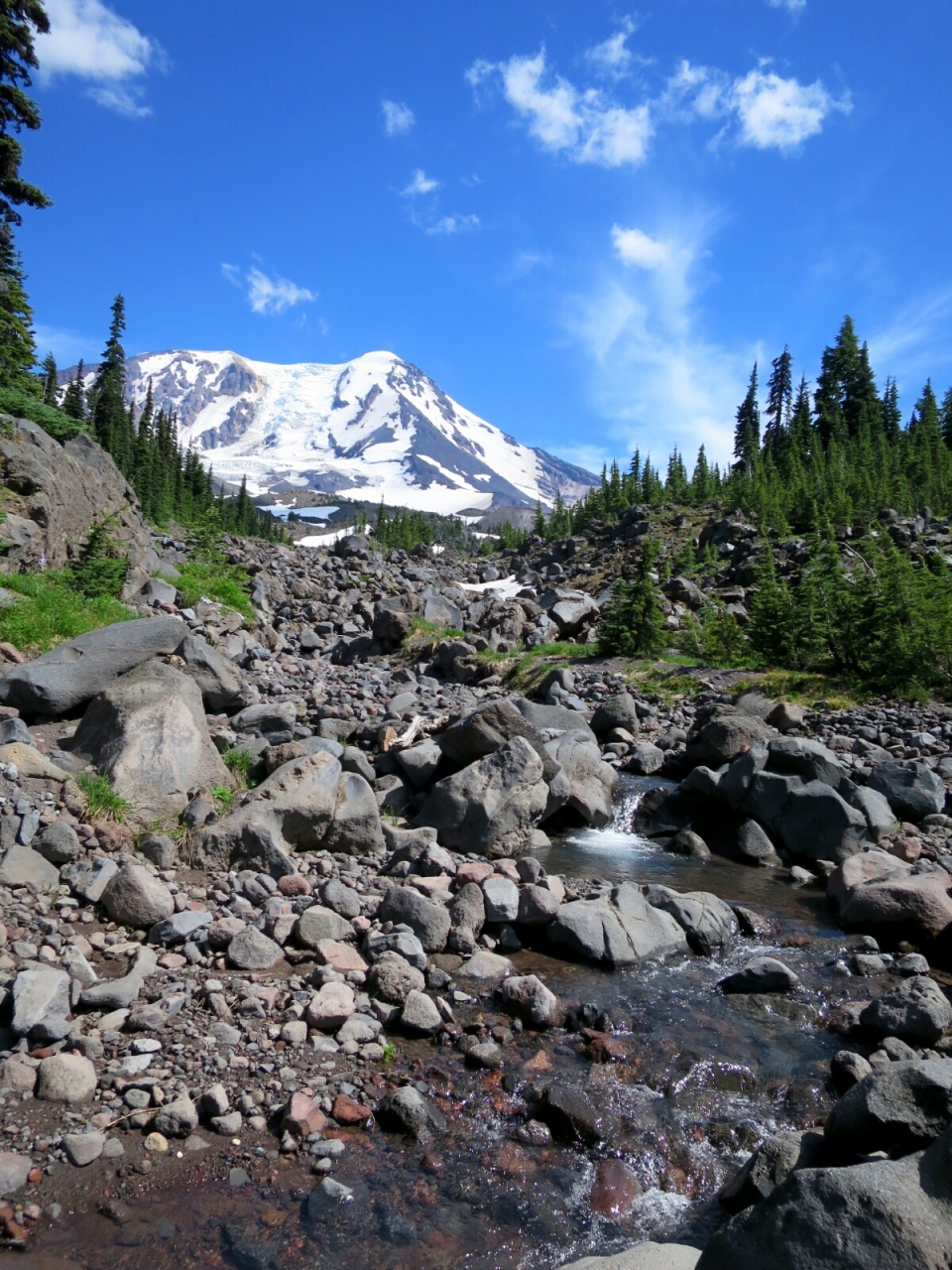 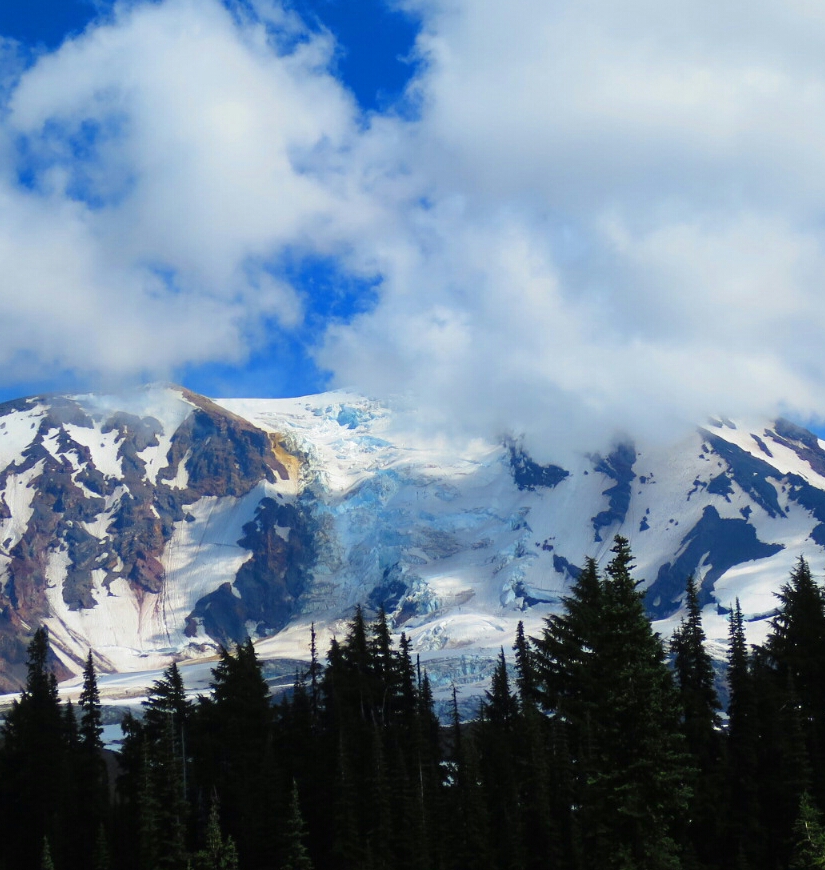 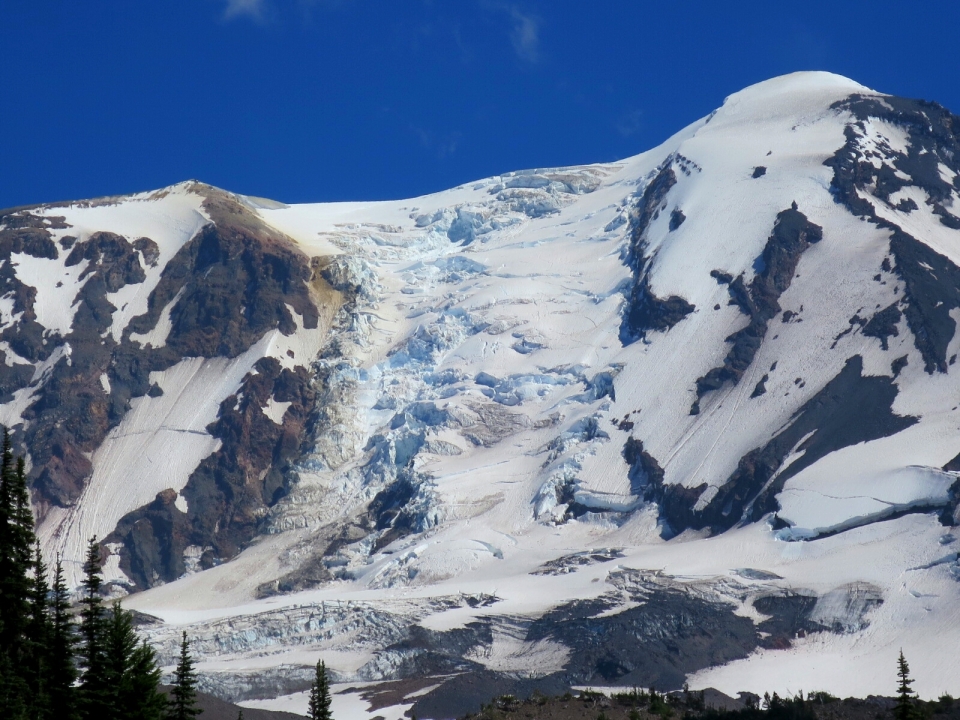 Late in the day there were quite a few creeks formed by the glacial meltwaters which the trail crosses.  All except one unnamed creek (just before Killen Creek) were easy enough to cross keeping my feet dry. This unamed creek was a little bit like the Sandy River crossing a few days ago coming off Mt Hood. Fast flowing and silty, it took a little while to find a crossing spot I felt comfortable with. And it was shoes and all in, to get across. 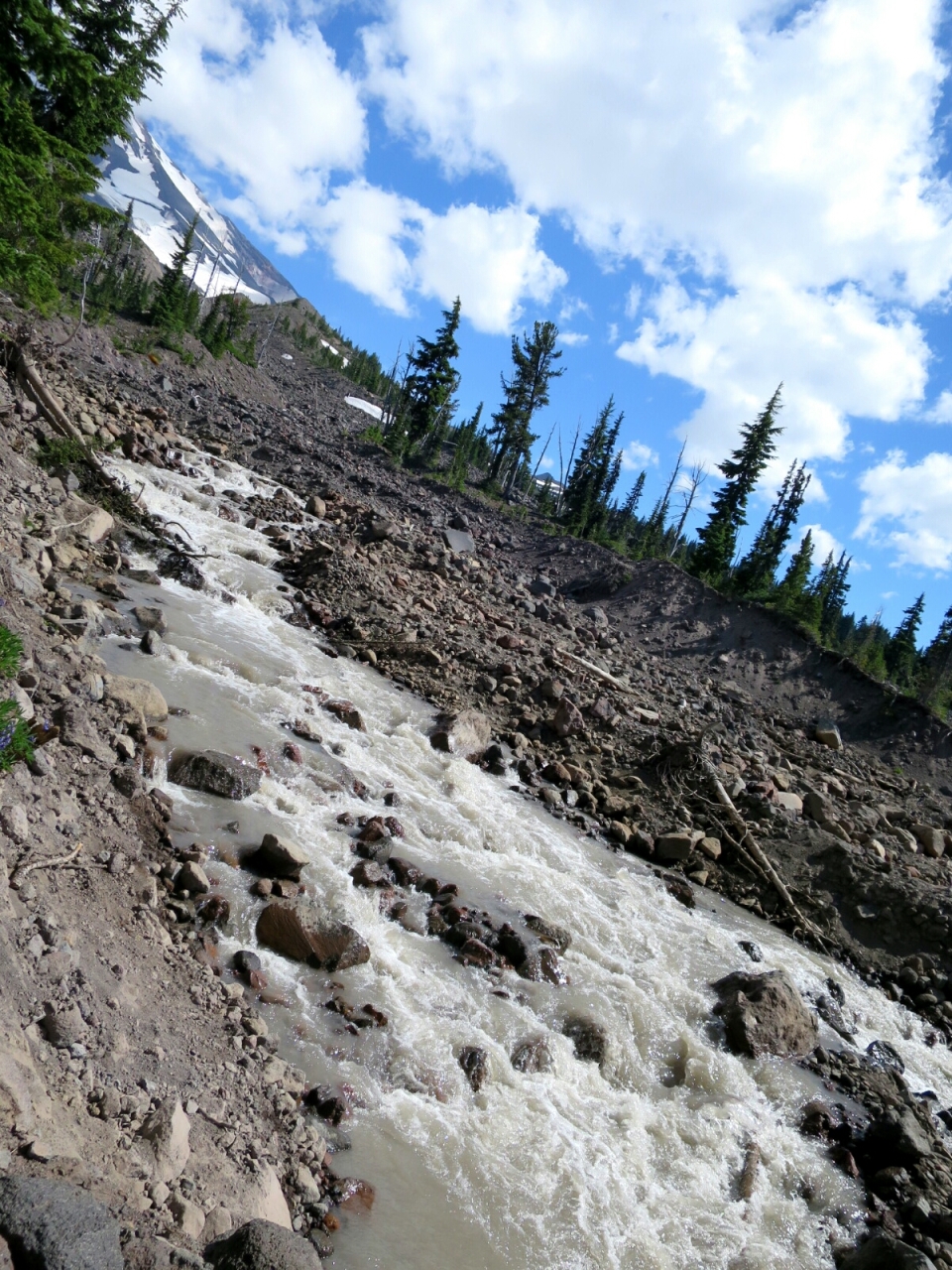 This got the heart rate up a little.  It was almost 4pm and I have not seen another person on trail all day. And just as I was feeling a little lonely  I could see not very far in front of me two gentlemen walking with lamas. I passed them just near Killen Creek where a family  group was camped. Kids were laughing and playing in the clean water of the stream passing through a meadow.  This scene was so surreal I felt like I must have been dreaming.   I eventually caught up to the lamas and asked their owners how they managed to get the lamas across that fast flowing silty creek. Oh…one of them said. ..we drove them in a car over the bridge.  I never found out what bridge. But I gather they came in on a side trail which must have car access at the trailhead. 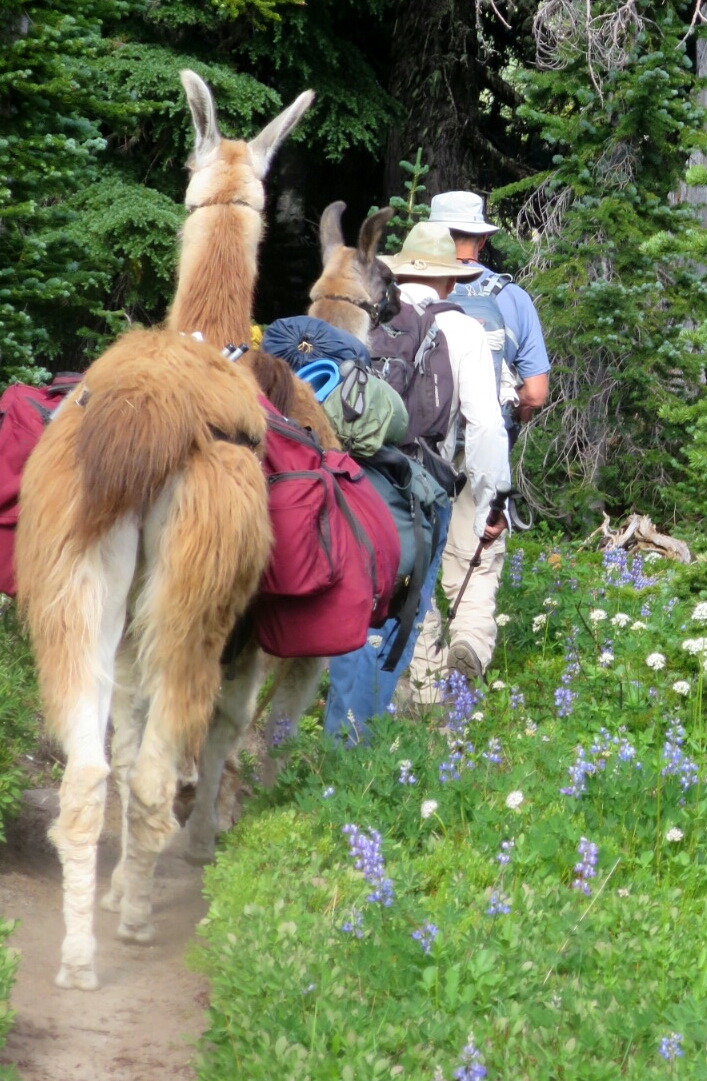 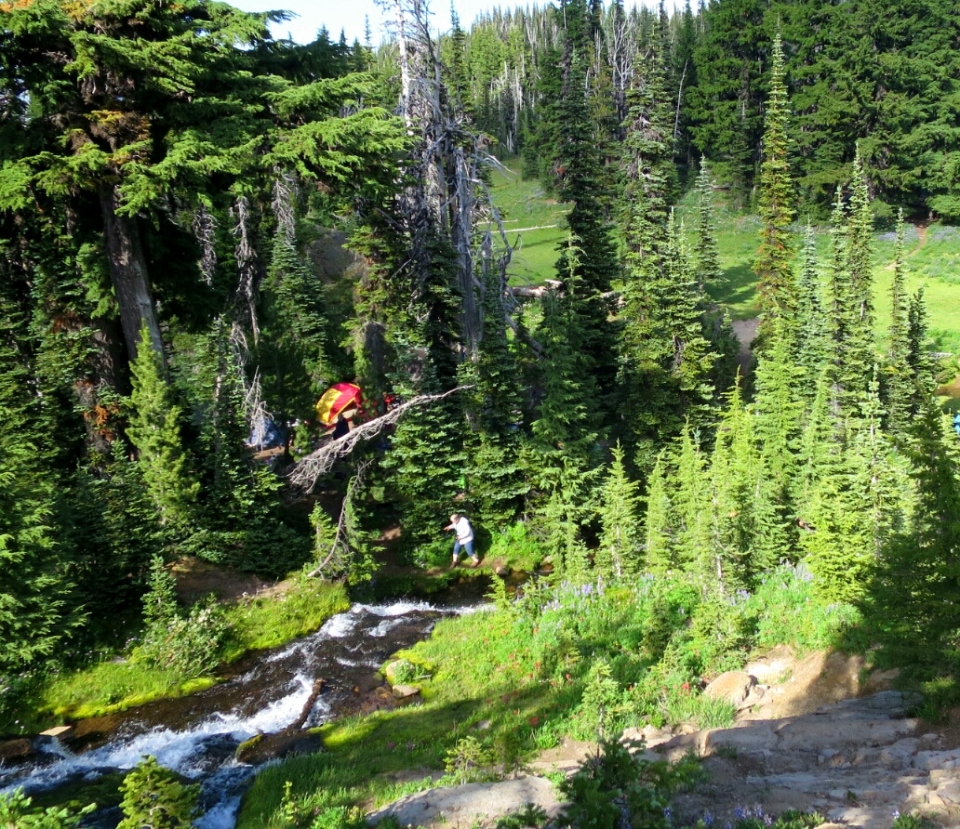 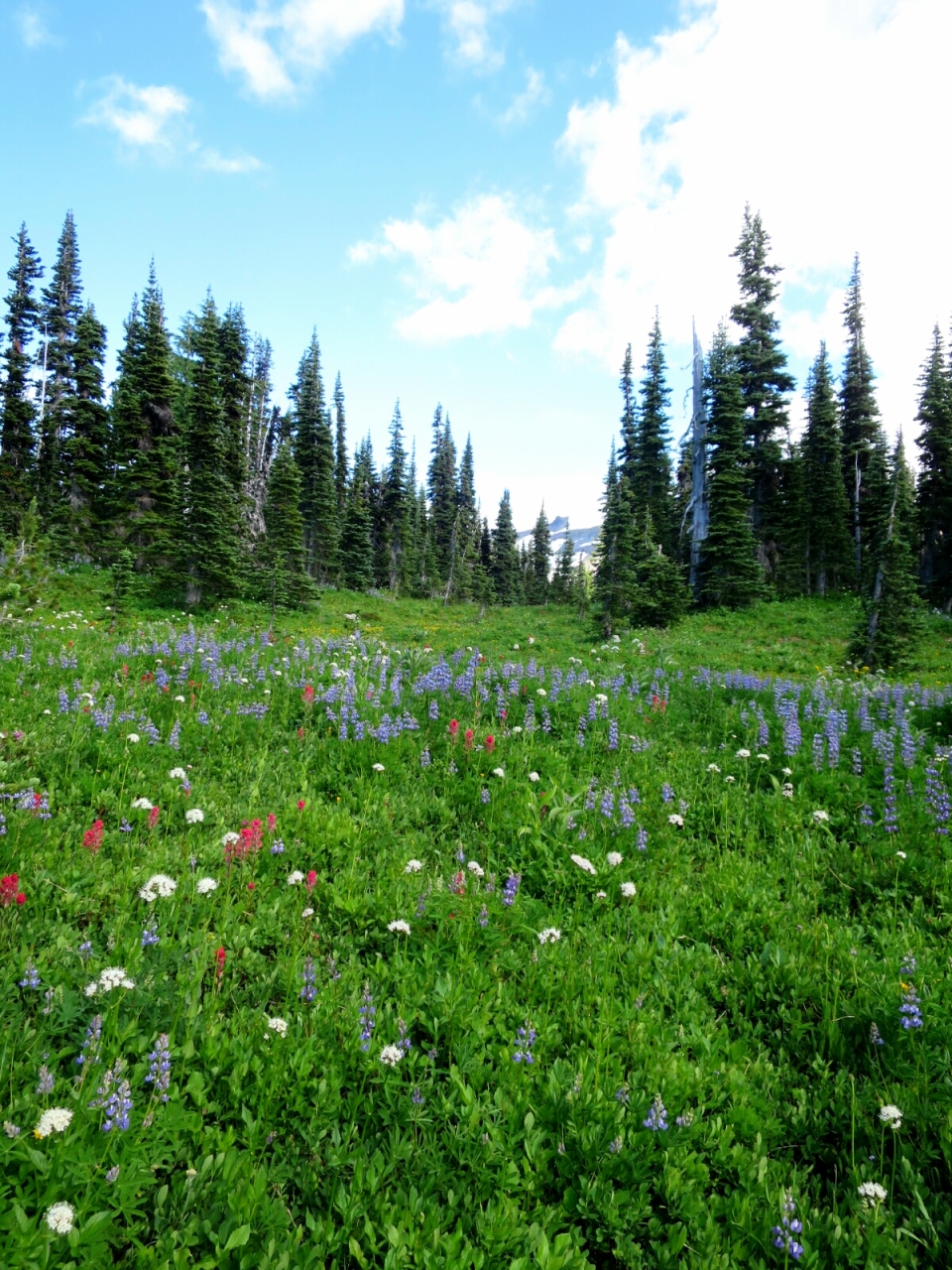 From Killeen Creek the views of Mt Adams receded as the trail descended through a forest.  I had one last view of Mt Rainier which now looks even closer. I stopped for the day at a creekside campspot just after Muddy Creek. Wet feet and exhausted, I couldn’t wait to get dry and horizontal. 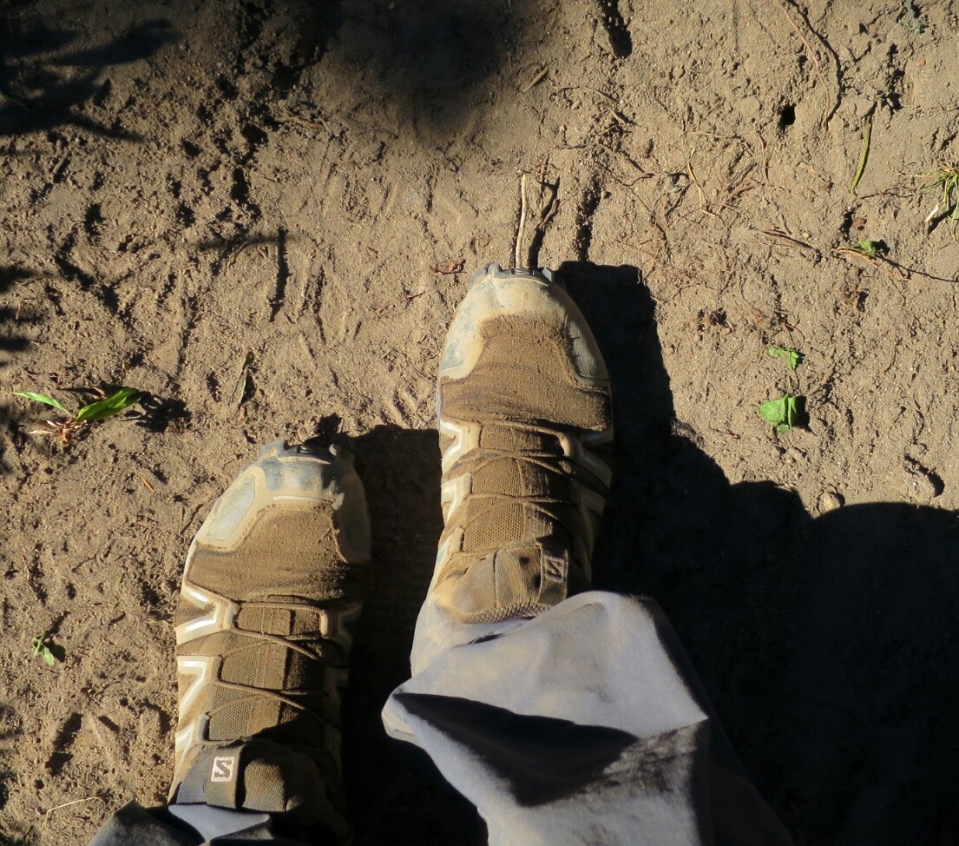