Today was such a huge day with soaring highs, spirit sapping lows and so many moments of absolute wonder at the power and resilience of the natural world. It was a long day and this is a long post.

The full moon shining through the night illuminated our surroundings. It felt like someone had left the lights on.  The moon was still high in the sky as dawn started to break. The mountains surrounding us were starting to light up and  come to life.  It was hard to stop taking pictures as the sky changed from blue to pink and the moon slowly sank out of view.   The views made my heart burst with joy. What a fantastic start to the day.   It was one of the best campspots we’ve had in a long time. 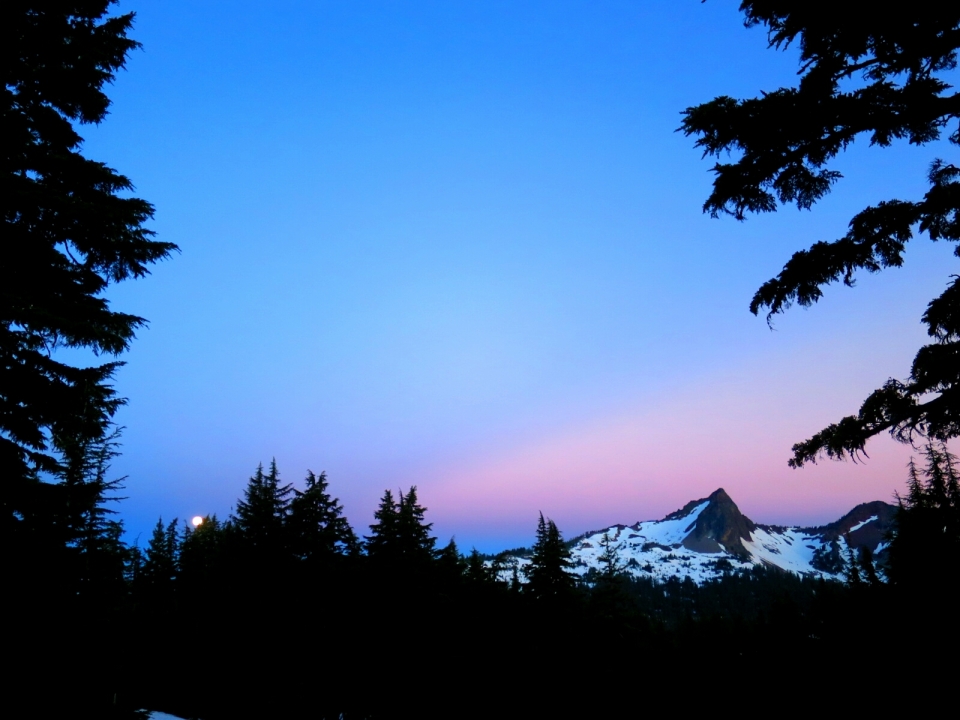 It was a bit cold as we were breaking camp.  And as we set off on the snow, it was icy. So it was on with our microspikes and crunch, crunch through the snow.

Our campsite was about 4 miles south of the obsidian zone which I was really looking forward to seeing. We were on snow most of the way. Routefinding was easy as we had reasonably visible and reliable foot tracks to follow. We passed a sign indicating a special zone around Linton Meadow which was to the west of the PCT. We could see a trail out of the snow and started to follow that only to find after about a mile of downhill switchbacks that we were on the wrong trail. We were heading to Linton Meadow. So a disheartening slog back up and almost an hour of morning hiking wasted. 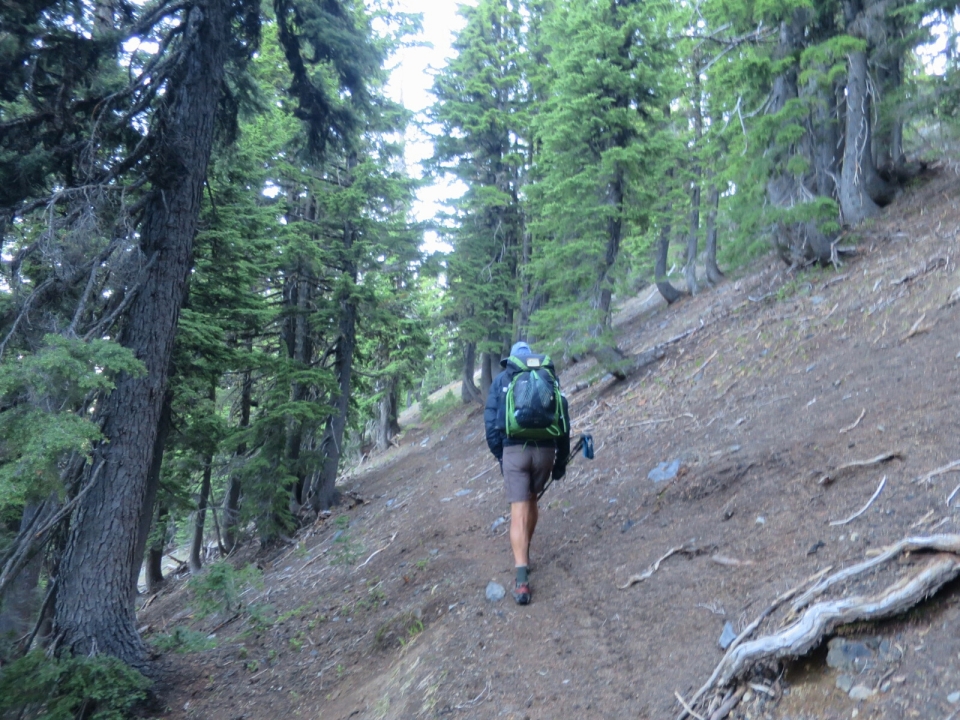 Back on the PCT and a tricky steep descent on snow, we entered the obsidian zone. While pockets of obsidian were exposed, the majority of the area was still under snow. Obsidian is an igneous rock and looks like shards of black glass glistening in the morning sunshine. It is difficult to capture the sparkle. Obsidian Falls were in full flow and I was relieved that the trail did not cross near the falls. 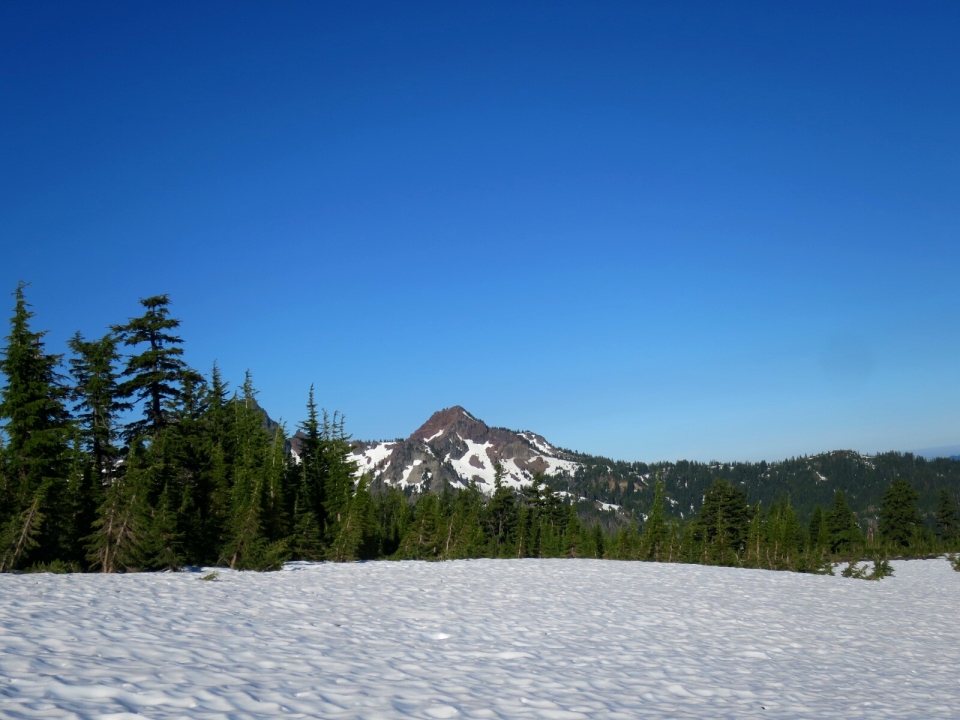 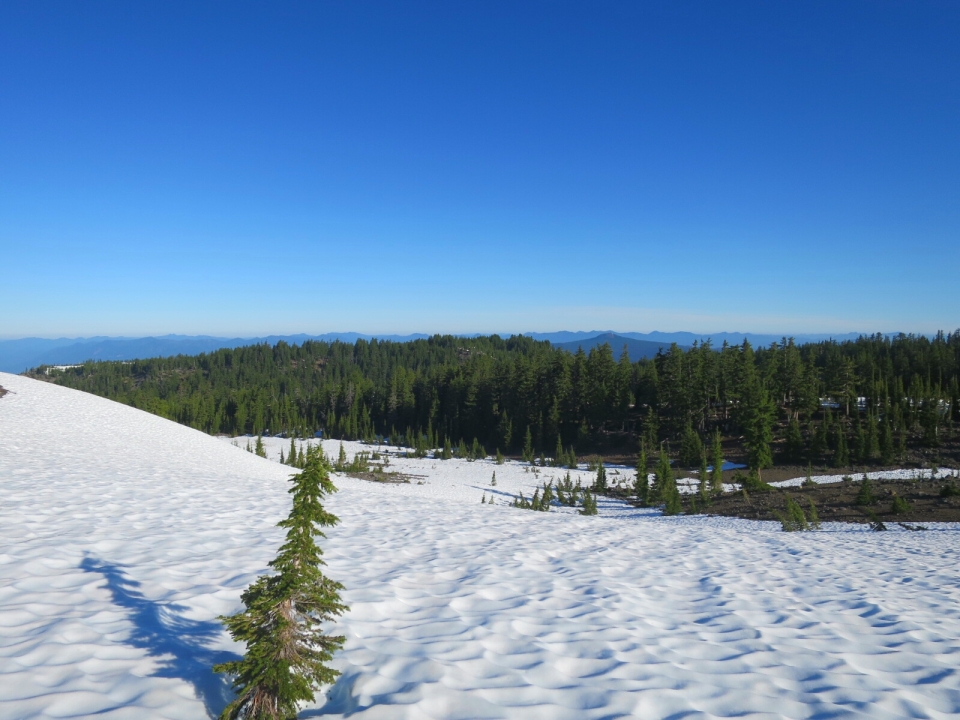 Soon after leaving the obsidian zone a stunning view of a chain of mountains opened up in  front of us. This chain of snow covered peaky mountains  we think were Three Fingered Jack, Mt Jefferson, Ollalie Butte, Mt Hood and the very tip of Mt Adams in Washington. They were perfectly aligned. This view was so spectacular we coud not get enough.

As we headed north through the lunar landscape of the laval field on our left and then winding our way up through it and up through  Opie Dilldock Pass, the volcanic history of Oregon was under our feet and in the peaky mountains in the distance. We stopped for lunch on the north side of Yapoah Crater (mile 1975) for what we later learnt was our last view of the whole chain of mountains. And it was also the last of big areas of snow covering the trail. 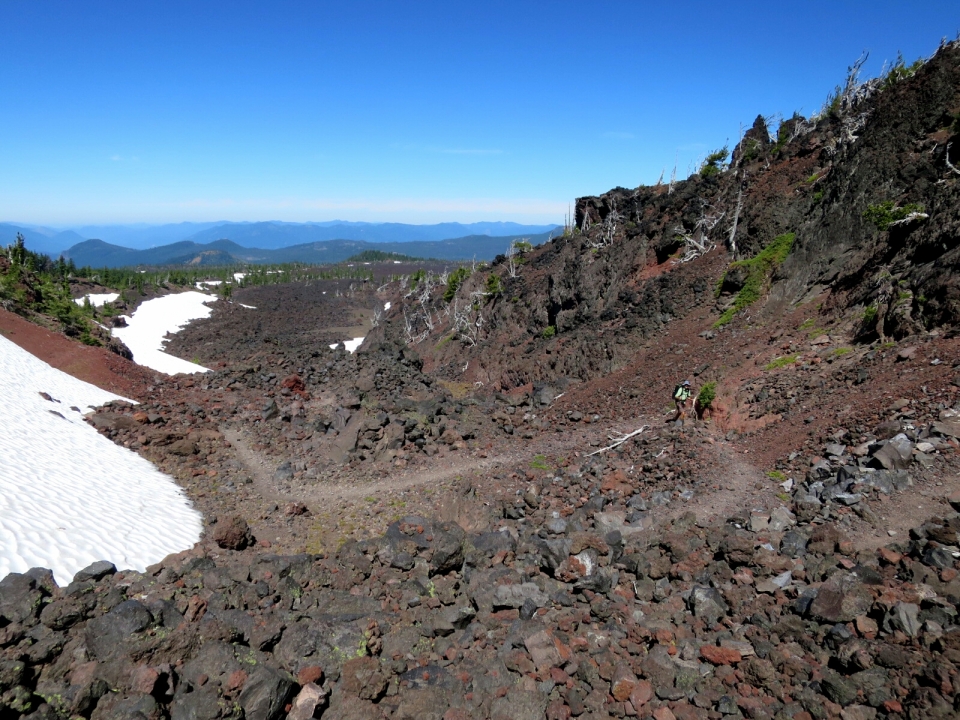 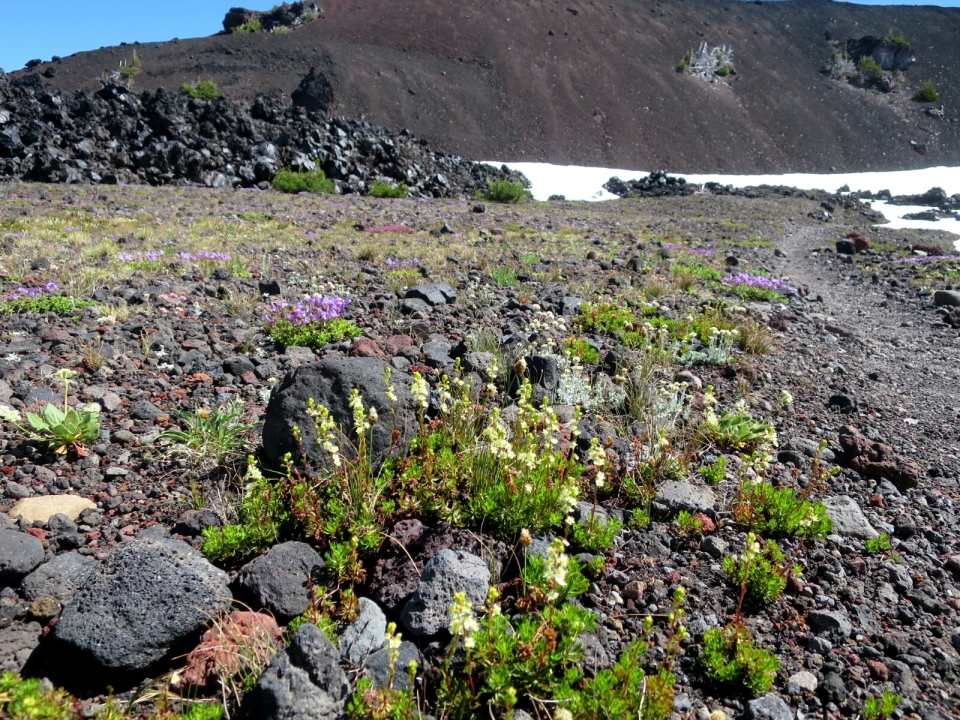 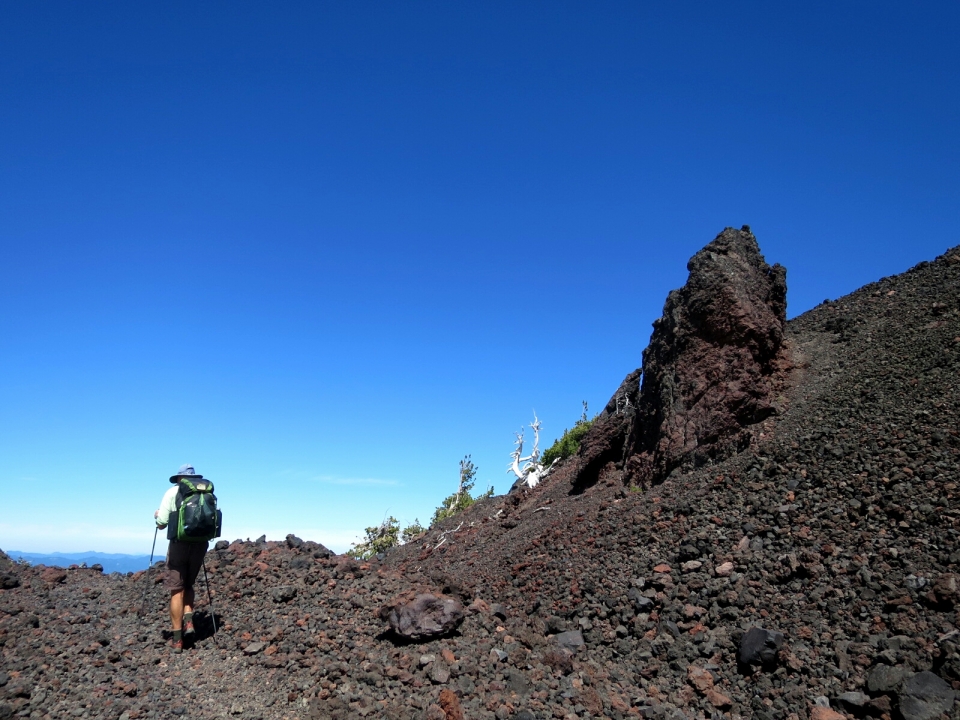 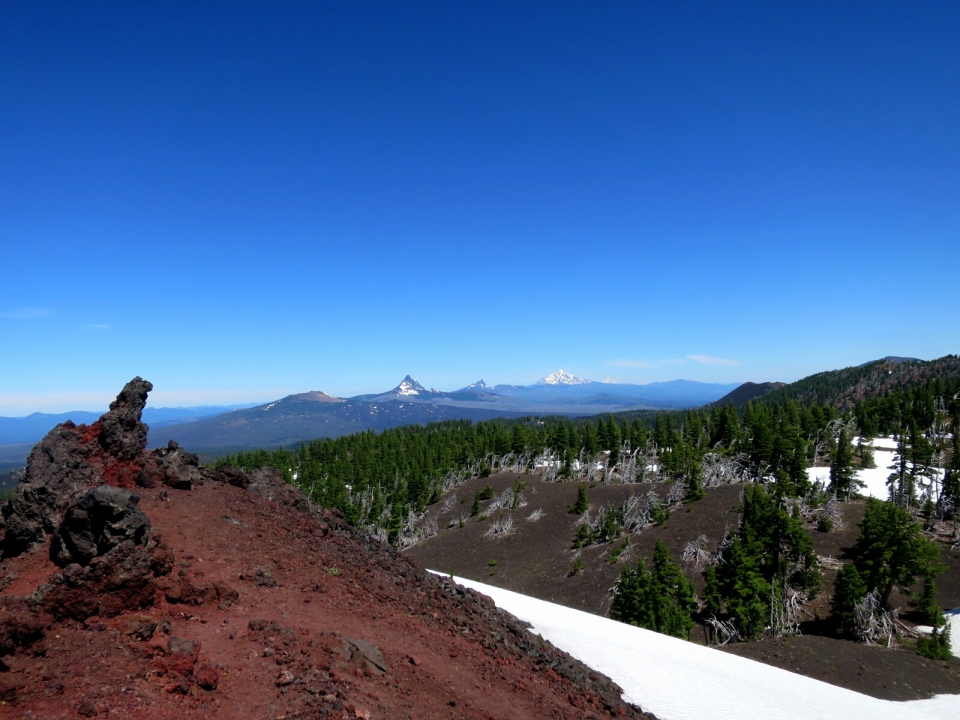 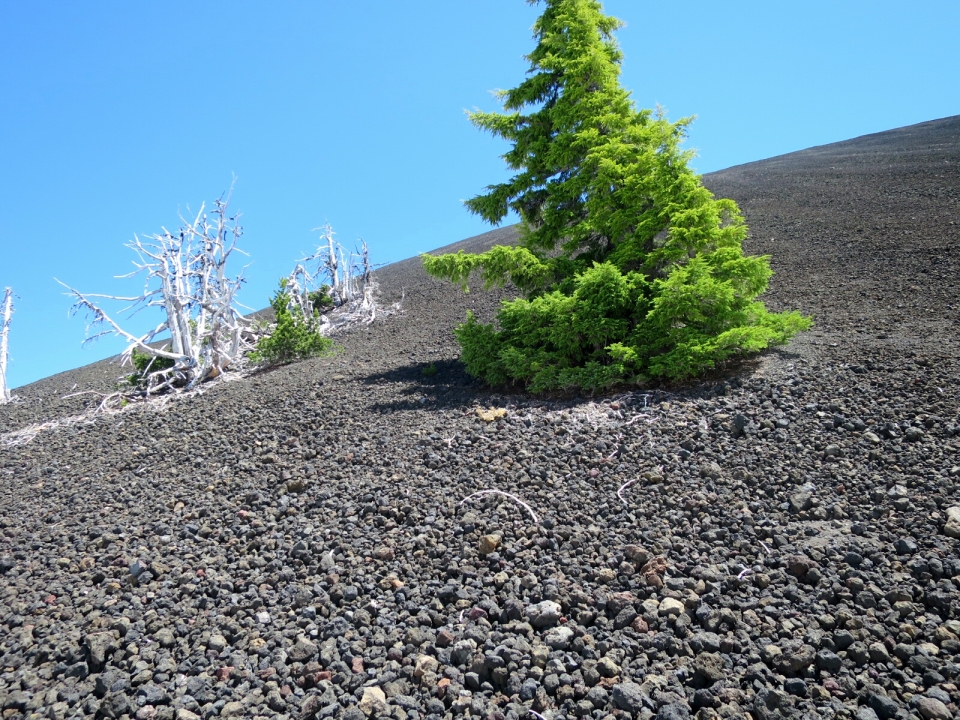 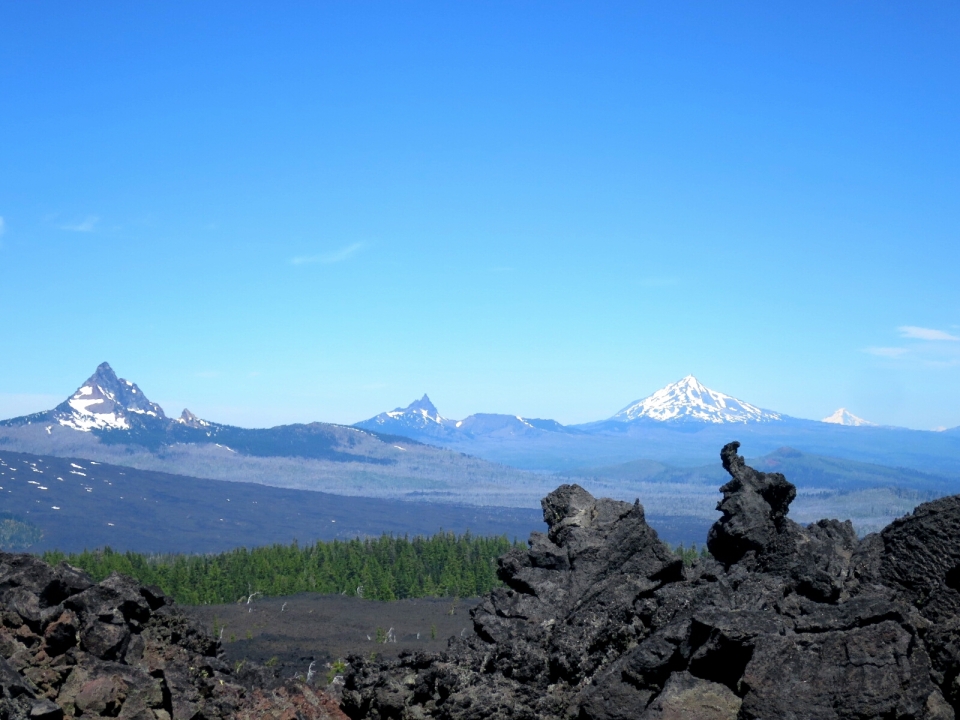 It was incredible to see the amount of life in what to us appeared such a hostile environment of laval rock. Lots of beautiful spring flowers and an occasional pine. At one stage we passed below what looked like a snow covered mountain of slag left after iron ore refining.  It was such a sensational, scenic and varied morning of hiking.

After lunch we started the descent towards McKenzie Pass at Highway 242, passing the beautiful mosquito free Matthieu Lakes. Here we passed a trail crew cutting a log that had fallen across the trail. Being inside a designated  wilderness area, where no mechanised equipment is allowed, they were cutting this log old style with a cross-band saw. Damn hard work. Being Sunday we passed a few day hikers enjoying the warm summers day on trail that was free of snow.

From Matthieu Lakes everything changed, we had hours of much  more challenging hiking.  We were running out of water, it was hot and the trail notes indicated that the next water was at Laval Lake Campground in 3 miles and after that it was 12 miles to water. So after a hot and dusty descent to the campground we could not find any water. I asked a couple who were camped in their RV – nope, no water at this campground. They very generously gave me a litre from their van. So we headed back on to the PCT only to realise that our water source was the lake which was busy with swimmers and had warnings about swimmers itch. So with a litre of water each we headed into hours of foot tenderising hiking on laval rocks. It was hot but we were saved by a much appreciated cooling breeze.

We hoped there would be a little snow on the north side of McKenzie Pass. And we were very lucky – a few small patches. We collected a bag of snow which gave us another litre of water.  A soul crushing 3 mile ascent through laval rocks in the late afternoon, nearly finished us off.  So pleased to get to a campsite and get off the rocks.  The finish to today could not have been more different to the way our day started. A day of extreme beauty and extreme ruggedness.  Absolutely exhausted, we were asleep within minutes of getting horizontal.

6 thoughts on “WORLD OF WONDER”