We spent the morning in Boise, Idaho. The parts of the town that we saw  reminded us a lot of Adelaide: a flat landscape, disected by a river, a large university downtown and great food and coffee. Even the population is of a similar size. A most pleasant morning enjoying the walk along the Greenbelt – parkland that lines Snake River.

We left Boise in sunshine and before too long the clouds gathered and the sky turned an inky blue colour. It looked so dramatic against the bare rolling hills. We just made it over the border into Ontario, Oregon as the rain started. We decided to stay for the night.

The rain passed overnight and we headed north from Ontario on Route 84, taking a detour to visit Hells Canyon.  The landscape we passed was very similar to the high desert of Southern California. Bare rolling hills covered in sagebrush and a quite a few still flowering varieties of plants.

We followed the road into Hells Canyon all the way to the Hells Canyon Dam Wall – which was the end of the road. We camped for the night near Big Bar. The location was the site of a very successful fruit orchard, much of which was flooded when the dam was built. A few fruit trees are still remaining nearby. From our campsite it was difficult to get the full scale of the canyon. It is the deepest river gorge in North America

It was such a pleasant warm night. Even the water temperature was mild. Our sleep was disrupted in the early morning by some deer coming by to have a drink from the river. After leaving the Canyon we stopped for breakfast in Baker City, a very large old gold mining town. Like some other historic towns Baker City we’ve passed Baker City had the appearance of a town in decline. We had a most delicious breakfast. It is such a treat to you find good food in unexpected places.

We had company on our way out of Hells Canyon 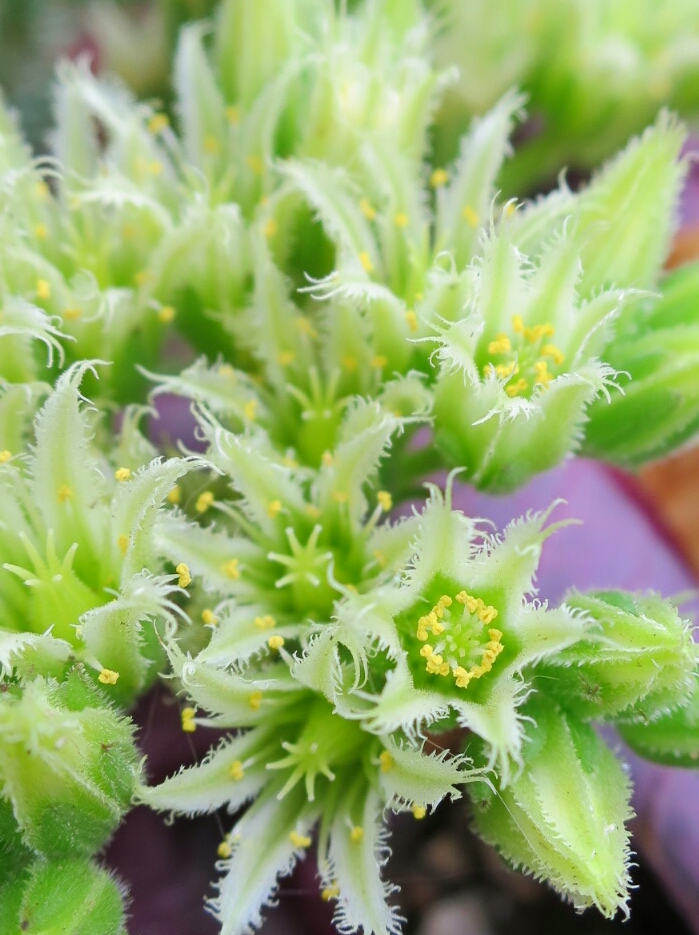 From Baker City we continued north on Route 84 which follows the Oregon Trail. The trail is a old route taken by pioneering families travelling west in search of a better life. Amazingly the marks left on the ground from the wagon wheels are still evident in parts. Such a tangible connection to the past.

Route 84 turns east and follows the mighty Columbia River. The volcanic history of the area is evident in the vertical basalt columns of the river gorge. We stopped for the night to camp by Hood River on our way towards Mt Hood.

Built in the days when aesthetics were as important as functionality.

We slept remarkably well despite the heavy rain all through the night. We woke to find the tent in a puddle and everything a litle bit wet. We packed up in the dark,  grateful that we did not have to hike in this weather. Instead we had a leisurely drive to Timberline Lodge to have one of their legendary breakfasts.

What a wonderful, warm and welcoming space. It would be the perfect location for a winter weekend gateaway. It was so cozy to lounge by the fire while the wind and the rain raged outside. As lunchtime approached,  it started getting busier inside. We reluctantly left the warmth of the fire and ran back to the car getting soaked in the process. I did spare a thought for any PCT thru-hikers still left on the trail. Character building weather for sure.

As we  headed south towards Bend, the rain eased and the sky started to clear. We passed through another huge river gorge, following the Deschutes River all the way to Bend.

The sun was back out by the time we reached Bend. It was a lovely evening to walk over to the Crux Fermentation Project brewery for dinner. It is a beautiful family friendly space with very nice beer.

It is so lovely  to be back in Bend. Last time we were here I was on crutches and was really not in a happy frame of mind. It is so nice to have the opportunity to come back and revisit the town. The morning was sparkling with crystal blue skies illuminating the white topped mountain peaks of the Sisters. We walked over to The Sparrow Bakery and again were not disappointed. There is so much to like in this gorgeous town.

The Bend Film Festival was on in town this weekend. It would have been so easy to stay for another day and then another…but we had a date in Ashland via Crater Lake and had to move on.

Crater Lake as the name implies is an extinct volcanic cone filled with the most intense blue coloured water. The PCT passes by here. When Hammer was here in early August a local fire obscured much of the view of the lake. It really is spectacular, we stopped many times at the various overlooks. Wonderful to see the whole lake. I am so excited already to return next year and walk through Oregon.

Back in Ashland where my PCT hike ended this year. A wonderful warm almost summerlike day to stroll through town. As a belated birthday celebration Hammer and I saw ‘Great Expectations’ performed by the world famous Oregon Shakespeare Company. We had both read the Dickens novel as high school students but did not have good recollections of the whole plot. It was wonderfull to be transported back to Victorian England  and our adolescent years remembering such rich characters. We were scarsely aware of the time,  it really  was a world class performance. We walked out of the theatre with smiles on our faces and spent the rest of the evening strolling around town. Just like yesterday it was almost summerlike conditions. It was only the colour of the foliage and the early sunset that reminded us that it was autumn.

It has now been a month since Hammer finished the PCT. It has been a month of car touring, eating good food and drinking craft beer. So this morning Hammer headed out for a run.  He came back huffing and puffing, feeling sore all over. 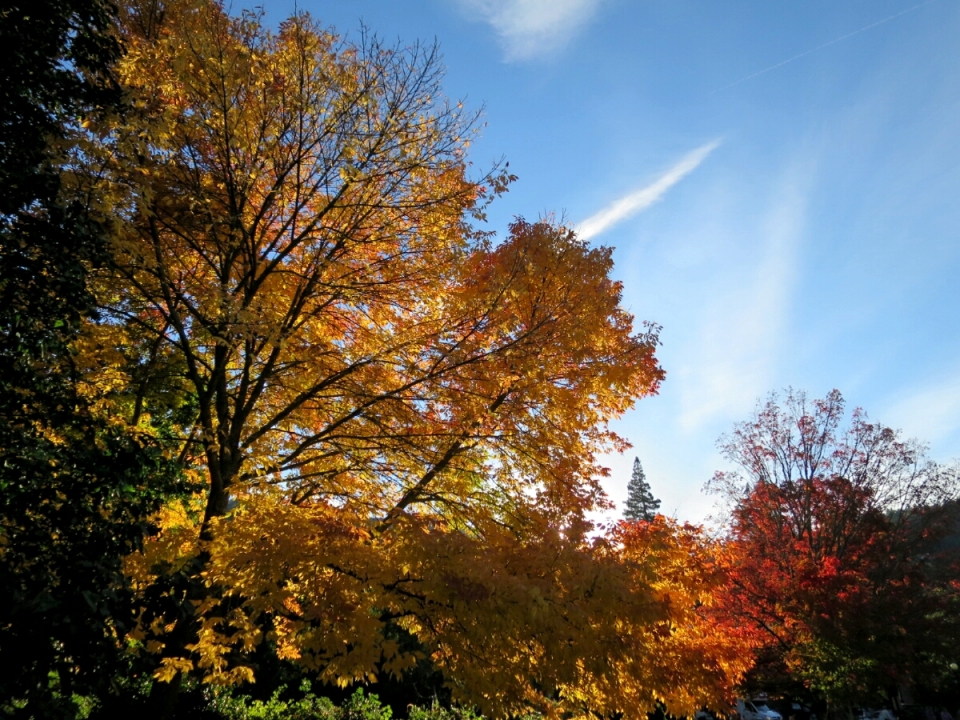 As the weather in Ashland was clear and warm we decided to head back north to hike Mt Thielsen.  By the time we approached the mountain the clouds had gathered and it started to rain. This in itself was enough to dampen our enthusiasm  for the hike but it was the fuel gauge light coming on in the car that made the decision for us. Such a silly mistake, we were running out of fuel miles from anywhere. Thank goodness we had an offline app on the phone  and found a service station 60 miles north. So the hike abandoned and fingers crossed we slowly made our way north expecting the car to stop at any moment. Much to our relief we made it to Chermult and filled up. The clouds were beginning to lift and it looked like fine days ahead. 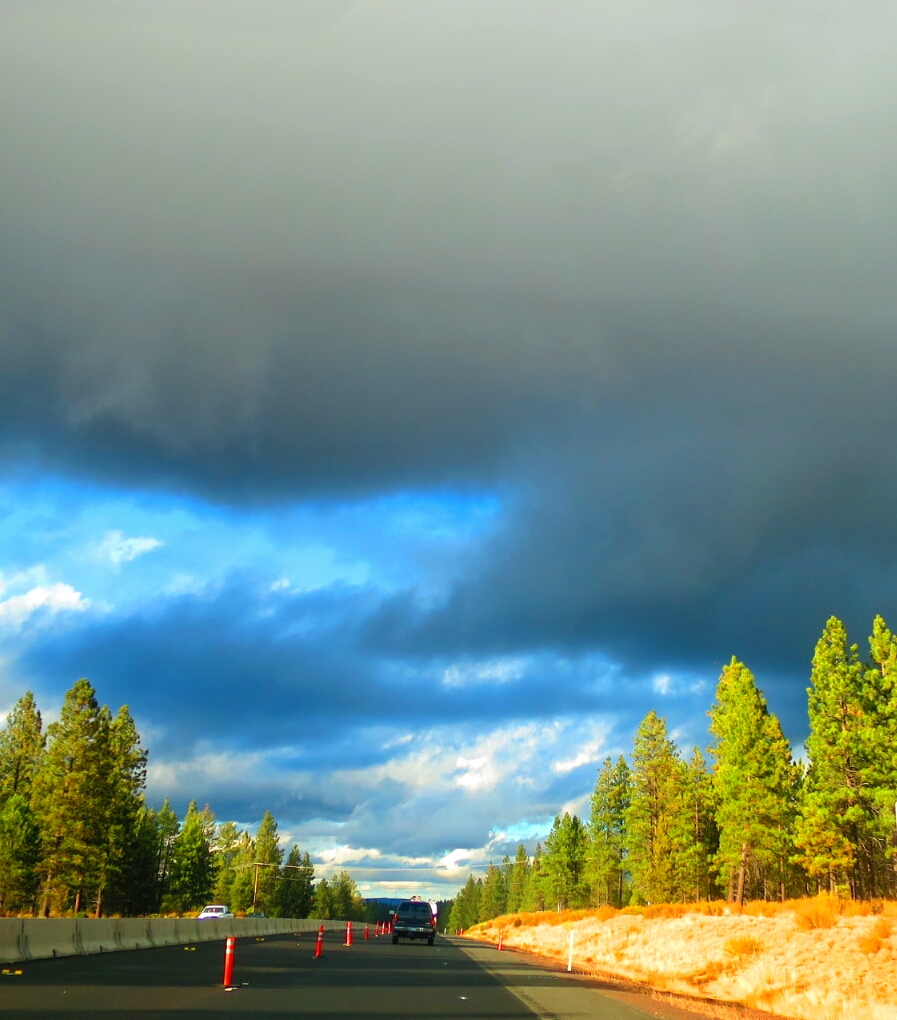