Bogong to Hotham – The Rooftop Run

January 13, 2011
Sunday January 9, 2011 (Race – 35km)
Breathtaking is a fitting description of my experience of running the 35km section of the Bogong to Hotham Rooftop Run held in the Victorian Alpine Nation Park on Sunday January 9, 2011. Buoyed by recent completion of the Kepler Challenge, I decided to enter the 64km Bogong to Hotham event. While many races bill themselves as the toughest, the B2H has long held a reputation for defeating many a talented runner. But a week before the race sense prevailed and I had decided to withdraw from the 64kim event and do the 35km option. The B2H is on 9 weeks out from my target race, the Six Foot Track. I did not want to loose a couple of weeks recovering from a run I did not know that I could actually finish. The race has tough to meet cutoffs of 5:30 at 35km or 6:30 if you elect to start early. The plan was to race the 35km and see if I could meet the cutoff and then consider coming back next year to attempt the full distance. Hammer had entered the full 64km distance hoping to make the cutoff after a disappointing result in the heat last year.
Hammer and I stayed at the Mt View Motel in Towonga. This year it was a less than restful experience. We had a large contingent of motor bike riders as near neighbours enjoying a social Saturday night. Their chatter kept us awake till well after midnight. The alarm went off at 3:45, so with only three and half hours sleep we got up and quietly got about our own the pre-race rituals. 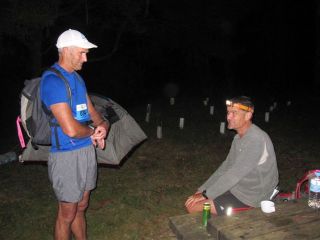 The early start was scheduled for 5:15 and after a breakfast of yogurt, muesli, boiled egg and a cup of coffee we got to the start at 4.45. It was still dark and I was debating about whether to start with a torch but the decision was made by the organisers to delay the start till 5:30. 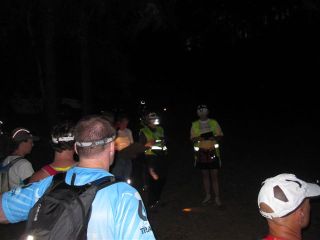 And just as dawn was breaking we were sent on our way. I gingerly picked my way over the loose rocky terrain on the flattish first two kilometres before the climb up Mt Bogong started. As always on these longer runs I felt clumsy and bloated and uncomfortable but knew that once I settled into the rhythm of movement the feeling would pass. But today that did not happen.
I started the climb up Mt Bogong, a 1400m ascent over seven kilometres in a relatively good position but right from the beginning the climbing felt really laboured. Much more than it ought to considering the terrain. I maintained my position in the line snaking up the mountain for about three kilometres before waving a group of runners behind me to pass. They passed and one very graciously said I was doing well and to push on. But the dark voices in my head offered a much friendlier suggestion of turning around and heading back to the car park. Who was I kidding, I was not a runner, today I was a clumsy pretender. Compared to how well I felt on a comparable climb up Mt Luxmore in the Kepler run, I knew that today was not going to be my day for a good run. But deep inside, despite the chatter going on in my head, I knew that I had to push through the easy way out and see what emerged on the other side. I continued to climb allowing anyone close behind me to pass and pretty soon I reached the treeline. The flower covered alpine meadow and the view down towards the valley was truly breathtaking. I dared on look up for too long as I did not want to see how far it was still to the summit of Mt Bogong. I was still not moving as well as I thought I should have been but had accepted that it was not going to be a good run for me. Hammer had passed me on the start of the climb and I did not expect to see him until the finish. The view from above the treeline was spectacular with mountain ridges visible in all directions. 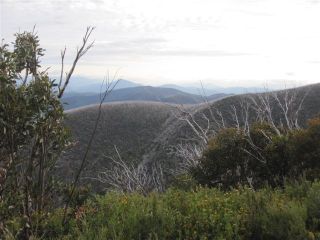 The valley, spread out below us could be glimpsed through the stands of dead snow gums which stood as grey ghosts of their former selves having been burnt in the recent bushfires. I reached the summit of Mt Bogong in 2hours flat and being buffeted by strong crosswinds headed of along the ridge towards Cleve Cole Hut checkpoint. I found this section difficult to run as the trail was fairly narrow and difficult to get good footing. I reached Cleve Cole Hut and after topping up my water and chatting briefly to the two blokes at the CP got going, excited now as I had not seen the next section of the course before. The trail was still undulating with short rises and a gradual descents towards Madison Hut. I was now running by myself and for a moment had wondered if I was off course so I stopped and waited till I saw a runner behind me. I was confused as I had expected the trail to start dropping.
But soon after reaching Maddison Hut CP the trail did start to sharply descend. I had one runner behind me and was startled by what I though was an out of control runner hurtling down the mountain behind us. I soon realised that it was the lead runner from the later start. He moved so swiftly on the descent that his feet did not appear to touch the ground. He reminded me of a leaping gazelle trying to outrun a pack of hungry lions. I was relieved that the climb of Mt Bogong was behind me but the descent off the mountain down to Big River was not easy, it was steep and very slippery. I had two near misses on this section – tripping on a tree branch which flicked, tearing skin off my left calf sending me flying downhill. I was saved from falling by bumping into a big gum tree. Phew that was close. But soon after I stepped on a rock which gave way, twisting my ankle and hitting me on the ankle bone which sent searing pain up my leg. Boy, my day was not about to get better, I thought. I hobbled for a little while and applying my running mantra of “acknowledge the pain but then let it go” soon was distracted by the chasing pack of lions gunning for a podium finish. Down to the river I was passed by the next eight male runners from the later start. I got to the river and was surprised to find Hammer was just ahead of me. Crossing the river was beautiful and cooling on the legs – it would have been nice to stop here and just lol about watching the runners go through. Hammer and I left the River together and he was just ahead of me. But what to do here – I did not want to run so close behind him as it would distract me from focusing on the run. Refreshed from my dunking in the river I emerged as a different person and I soon passed Hammer and several others on the brutal four kilometer climb along Duane Spur. I felt encouraged by two things here. Firstly I knew it had to come to an end I just had to keep moving forward and secondly one of the guys I passed complimented me on how well I was doing on this climb. This gave me a boost and this time almost breathless from exertion I laboured on as huge gobs of sweat dropped off my face. I don’t remember much of the landscape surrounding this section. Each time I looked up it just kept rising so I tried to narrow my focus to only a few feet ahead. Finally the trail started to level off and after ascending 800m over 4km I let out a wooo hoo. Just pleased there was some respite from the continual uphill slog. Halfway up the climb out from the river I was passed by the lead female runner from the later start. Uplifted by the leveling off of the climb I ran anything that looked runnable and walked anything that looked remotely like an uphill and soon reached Ropers Hut CP. It had a great campsite protected by trees and probably nice views in clear weather. I chatted for a moment with the lovely volunteers at this CP and after thanking them was on my way feeling stronger and knowing that I was on the home stretch, only 12km to go. 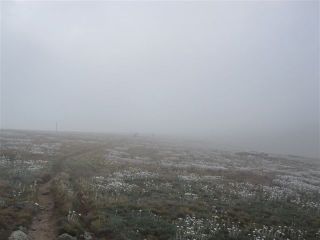 Leaving the cover of trees and following the snow poles, it was exposed and significantly cooler with a dense mist limiting the view ahead. As the trail still continued to climb towards Warbys Corner I applied a run two poles, walk one pole method of moving forward and was soon overtaking runners ahead of me. It was too cold to walk and I did not want to stop and put on my goretex jacket. 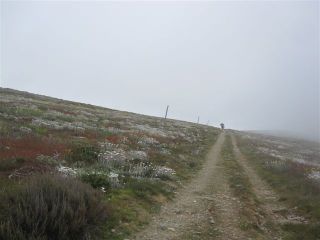 Before reaching Warbys my watch (Garmin 405) stopped working – 5 hours of battery life after being fully charged the night before and being used without a heart rate monitor. Bugger, I was so annoyed. But never mind I pushed on reaching Warbys, refilling my water and being told I was well within the cutoff and to take care of the legs on the way down to Langfords – only eight kilometers to go. This last section was where I finally got switched on to my running mode and I passed a few runners who went by me on the climb up Mt Bogong. The last eight kilometers was also quite surreal.  Running through dense mist reminded me of poor visibility diving where you keep descending knowing that something will appear in front of you just not sure what or when. I reached Langford Gap, 35km in 6hrs 18min and 12 minutes inside the cutoff. It was windswept and cold at Langfords while I stood around waiting for Hammer to come in hoping he would make the cut and go on. He came in 6hrs 47minutes and was disappointed to miss the cut by 17 minutes.

Our friend Al went on do the full 64km in his ultra debut, finishing in a fantastic time of 9:56. What a monster run to chose as your first ultra. But I guess if you were ever only going to do one ultra might as well make it one that really counts, a technical trail over brutal terrain that would challenge a mountain goat. And set in a breathtakingly beautiful part of the Australian high alpine country.

I am pleased to have completed the 35 kilometre section and having no niggles ran again the next day. Back on track, training for the Six Foot Track 45km race in the Blue Mountains, in nine weeks time. A big thanks to our support crew Ed, who carried our supplies and put up with smelly runners in the car on the drive back from Langfords Gap and of course the race organisers who do it purely for the love of running.

2 thoughts on “Bogong to Hotham – The Rooftop Run”