It was a restless, cold night for me. Hammer slept reasonably well despite the unexpected storm. Last nights rain has left everything feeling damp. The morning was so cold not even the birds wanted to wake up. 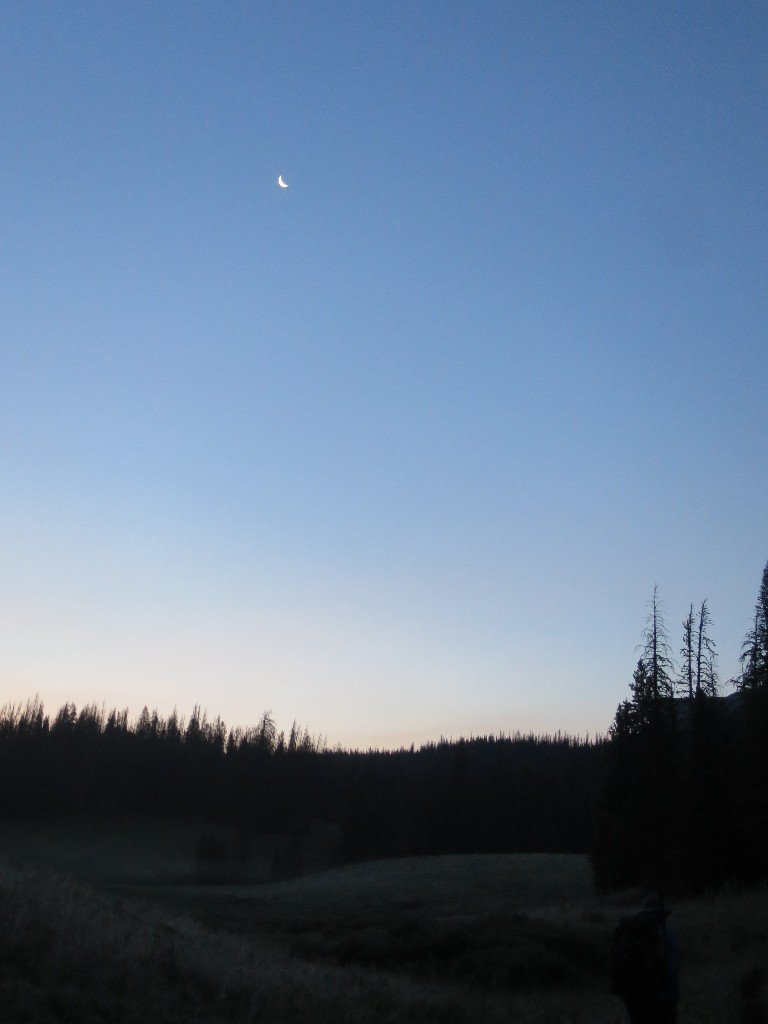 I was very keen to get out of this area. A hiker we passed yesterday told us that the trail out of Brooks Lake, where we are heading this morning, was closed due to a grizzly killing a horse. I asked another hiker we passed later in the day and he said he didn’t see the sign about the trail closure but the trail coming into Dubois from the Wind River Range had a dead cow which was almost all eaten. The rancher they saw nearby, said he thought it was wolves. It’s time to get out out of grizzly country. 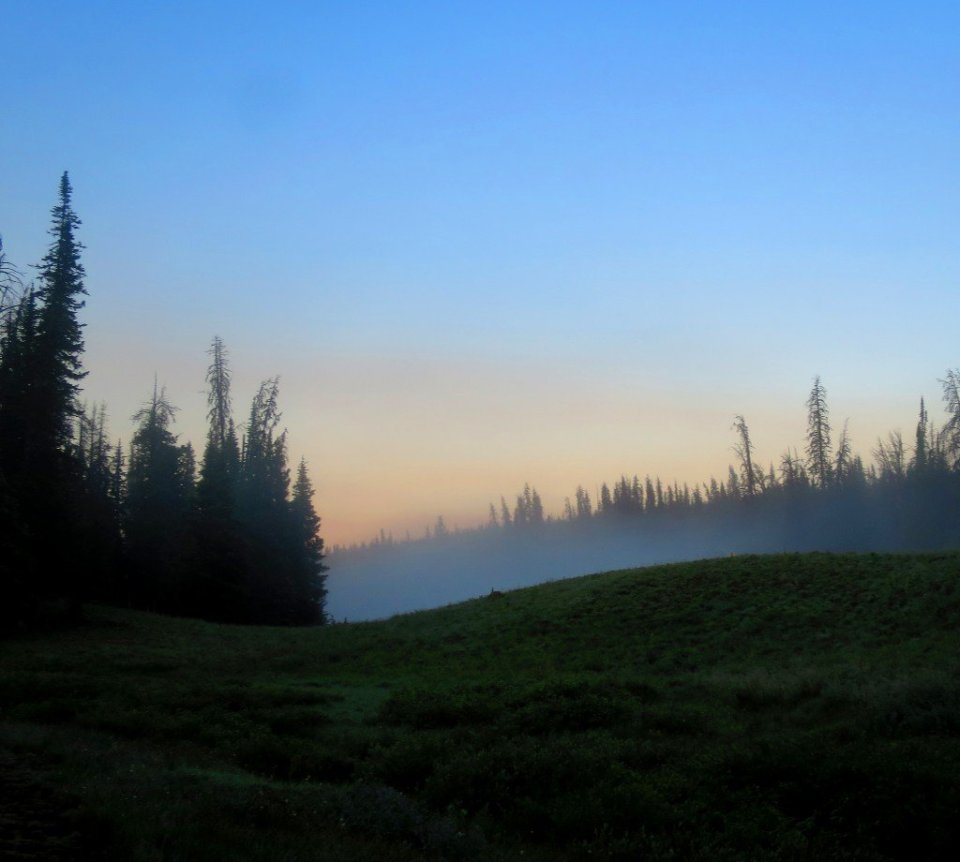 Breaking camp was a painfully cold experience. The tent fly was frozen solid and the ground was sodden. And putting on wet shoes and then crossing a creek was not pleasant. But knowing we were heading into town later in the morning made it all bearable. We were carried forward by thoughts of warm dry feet and town food.

We crossed the creek in the dark. A little way up the climb out I stopped to put on my socks. Leeches had attached to my legs. I tried to stay calm, suppressing a desire to scream. Leeches cause me more concern then any other irritant out here. Their attachment point tends to get infected and is painfully itchy for a long time, unlike a mosquito. But this was no place to be a prima dona about it. I pulled them off, got my socks on and got out of there quick.

There was no prospect of the sunrise reaching us until we were out if the valley and near Brooks Lake. So it was a cold and frosty couple of hours until we reached the lake. Passing the Upper Brook Lakes was sublime, despite the cold. The lakes were still and glassy. A mist was hanging low to the ground and the sunrise was illuminating the mountain tops. Cold hands and feet were soon forgotten as our attention was drawn to the splendour around us. I stopped way too many times to take photos, trying to absorb the moment. It was one of those amazingly beautiful and serene landscapes scenes that will remain seared in my memory. 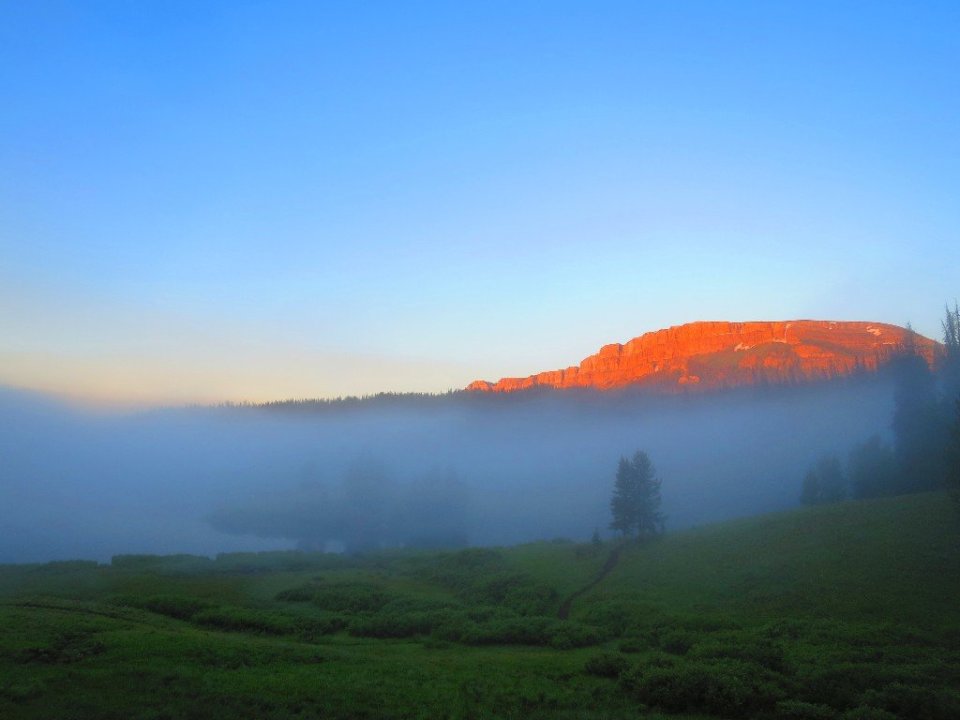 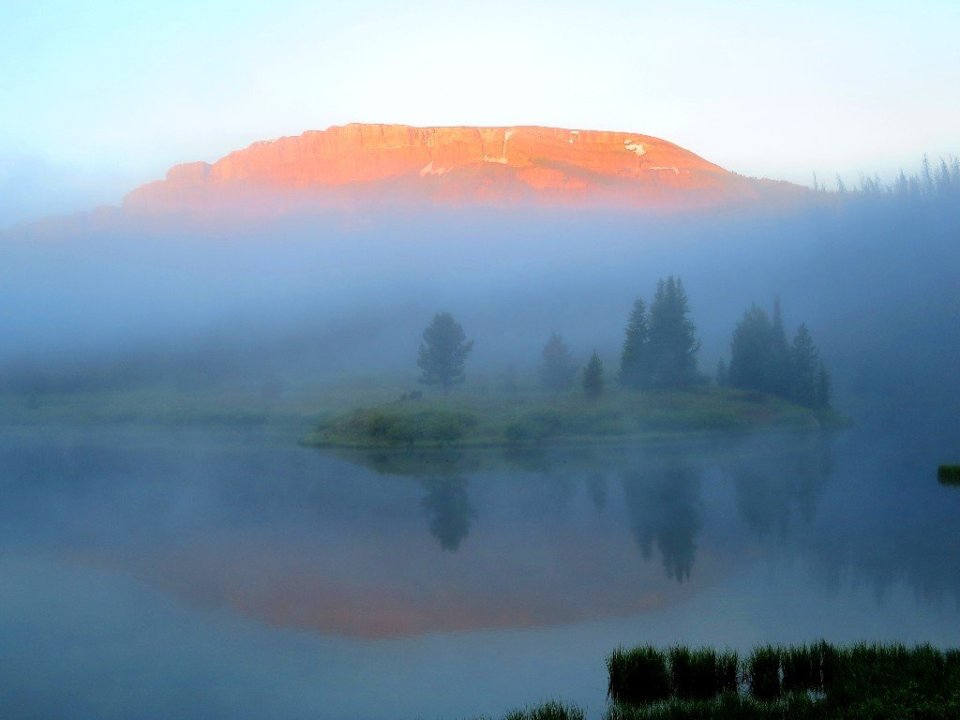 As we got closer to Brooks Lake, the sun was on our back and it was nice to take our wet weather gear off. The historic Brooks Lake Lodge was illuminated in the distance. Concerningly flashing red lights were also there. That can only mean one thing, fire. A heavy fog was hanging close to the valley behind us.

As we got closer to the lodge it was obvious that there had been a fire in one of the buildings. Dozens of fire trucks surrounded the site. The fire was under control and appeared to be mainly roof damage. 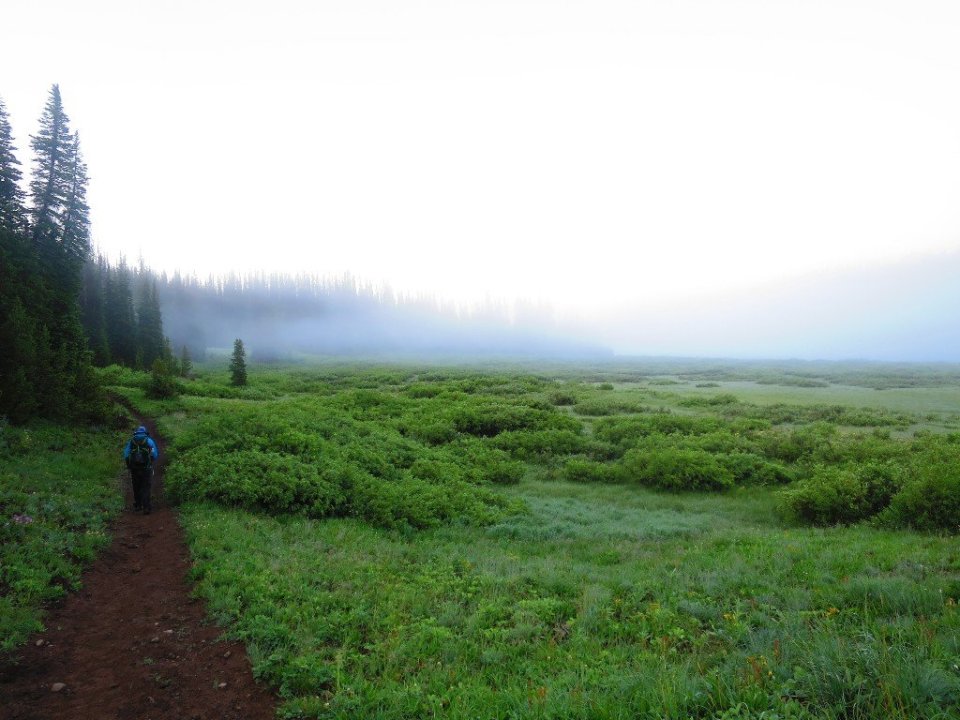 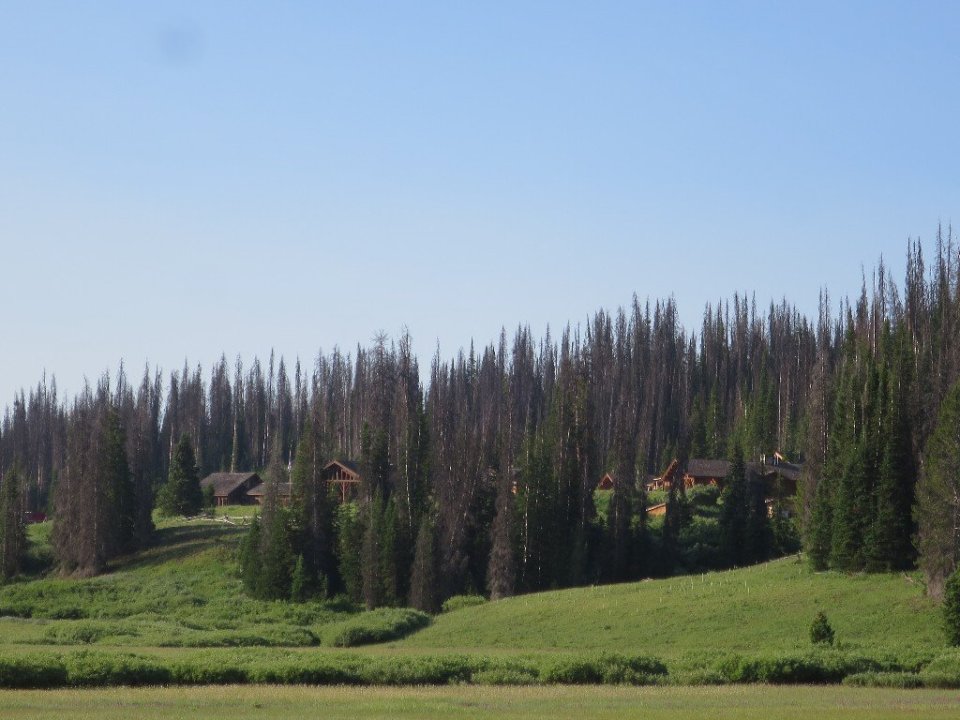 Our trail out of the area was closed to bear activity. So we had a longer hike out to the Highway and Dubois. Although not unexpected, this made me cranky. Hammer would not consider crossing the closure sign, despite knowing the northbound hikers were going through. So it was going to be a couple of hours longer then expected to reach Dubois. 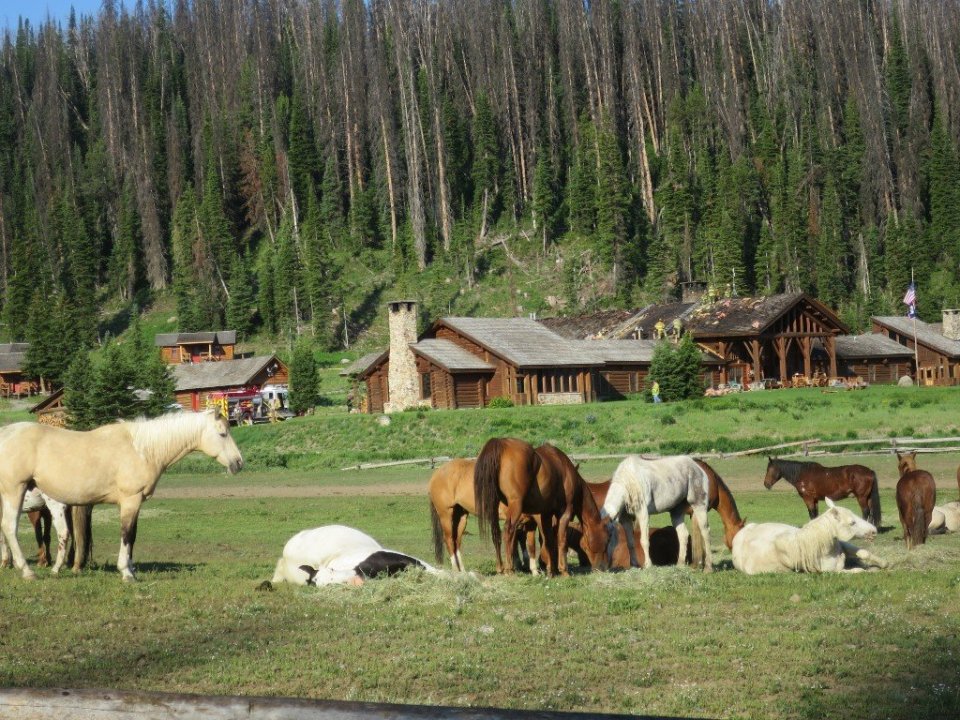 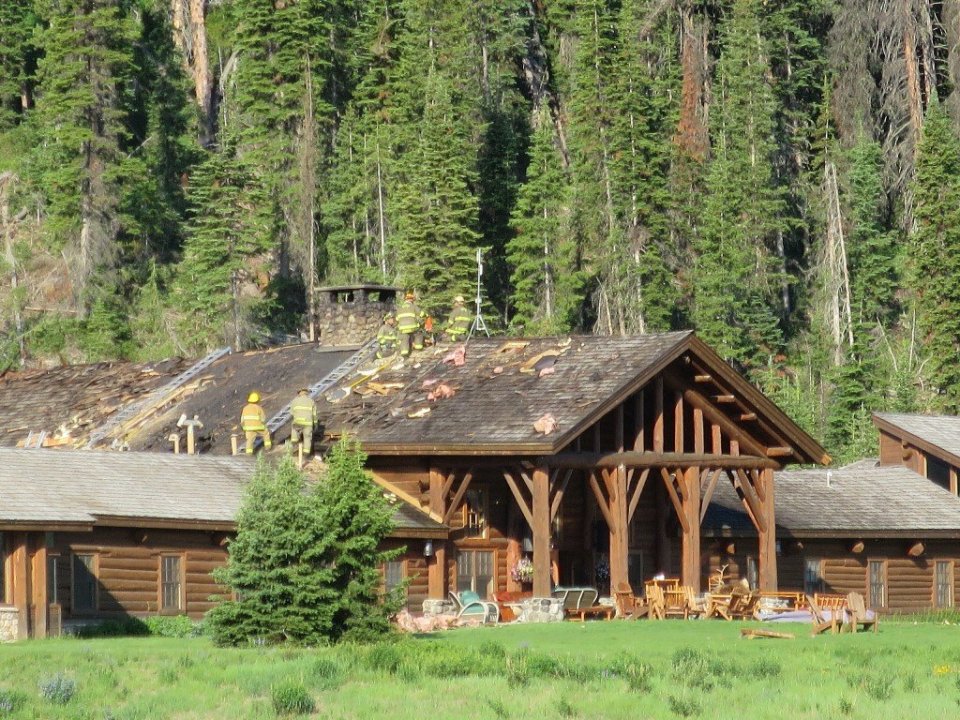 On the way out to the highway a car coming out from the lake stopped and offered us a ride all the way to Dubois. Brian, who gave us a ride, is from Texas and works at the Lodge as a wrangler and a fishing guide. He was concerned about keeping his job and residency in Wyoming as he wanted to go to college here. 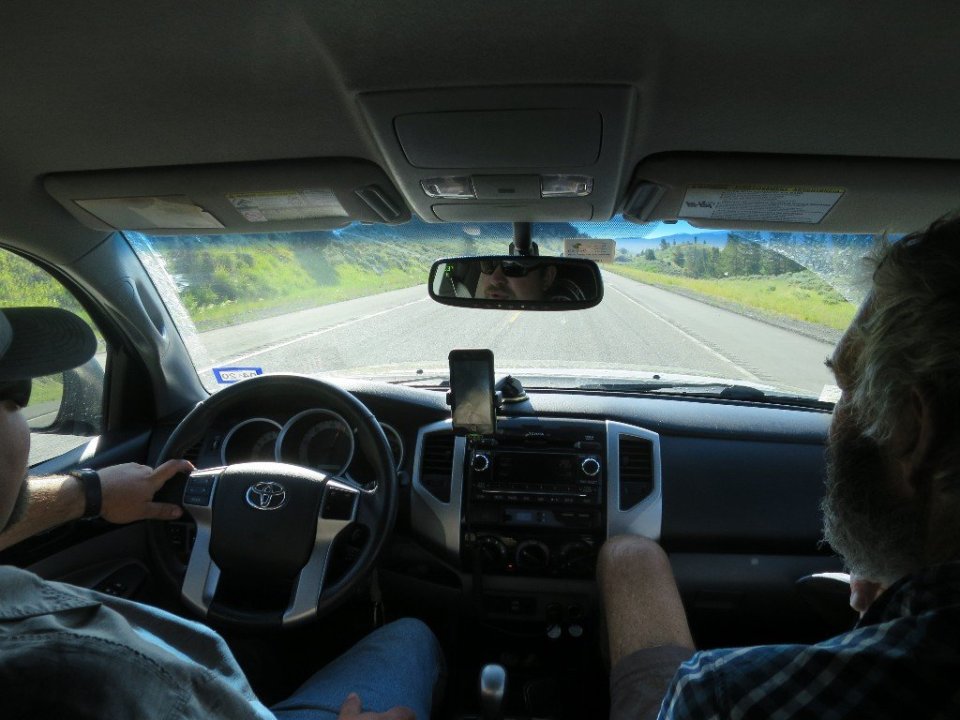 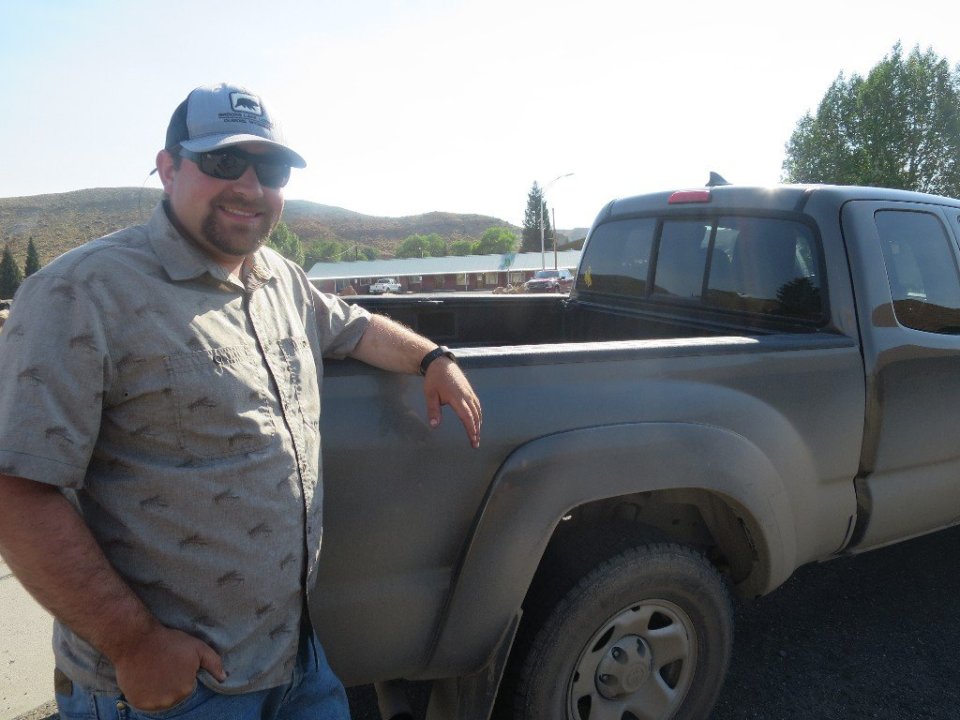 He dropped us off at the motel, where we left our bags before checking in. Trying to get breakfast proved challenging as church had just finished and as many places were closed on a Sunday, the few that were open, were extremely busy. We did finally get coffee and breakfast and all was well in our world. The afternoon was spent doing the usual town chores: drying out wet gear, shower, laundry, resupply to post to Encampment, blog updates, finding a new hiking shirt for me and catching up with other hikers at the motel. 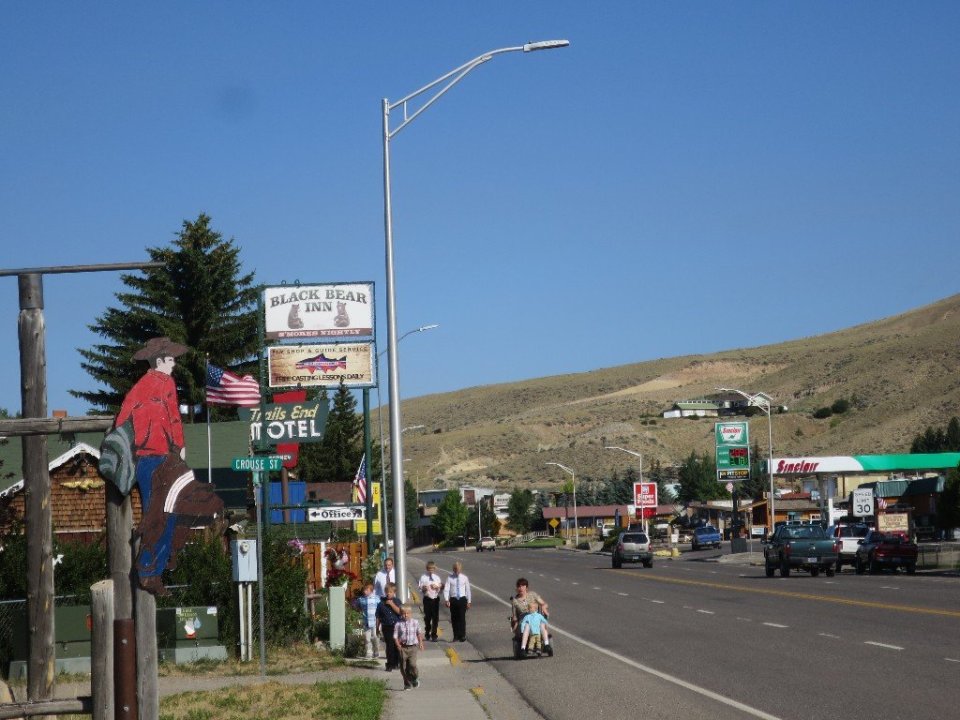 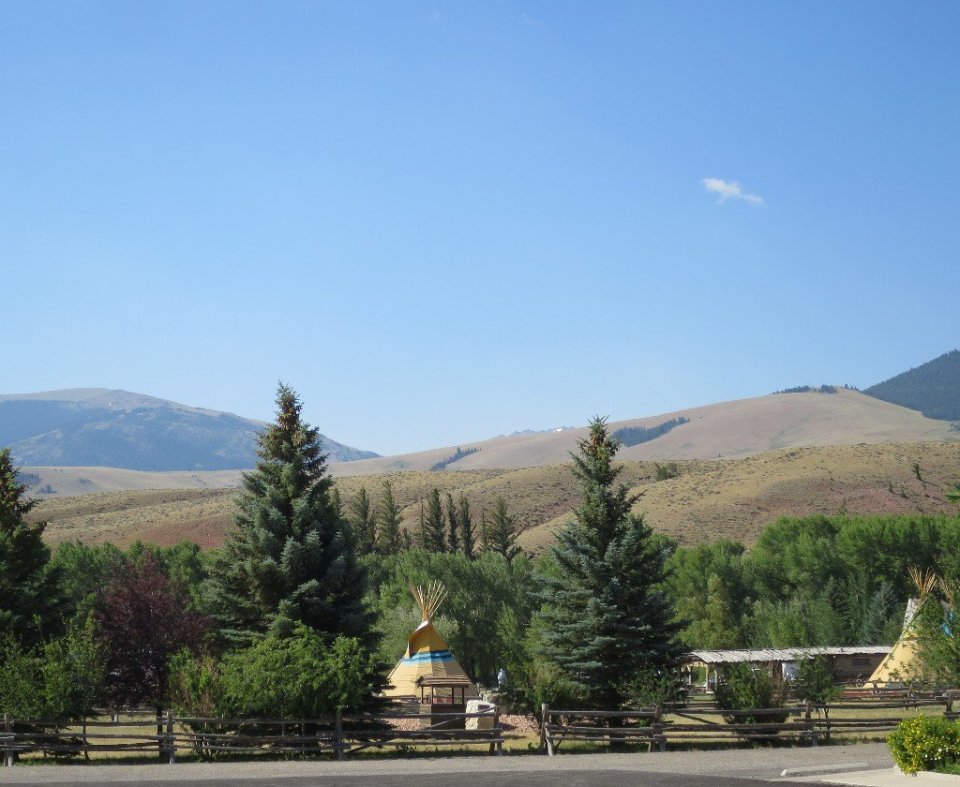 We were both very disappointed to find that the Nostalgia restaurant was not open today. Hammer had been fueled for the past few days dreaming of having one of their fantastic pizzas. It will have to wait for another time.

5 thoughts on “INTO DUBOIS”