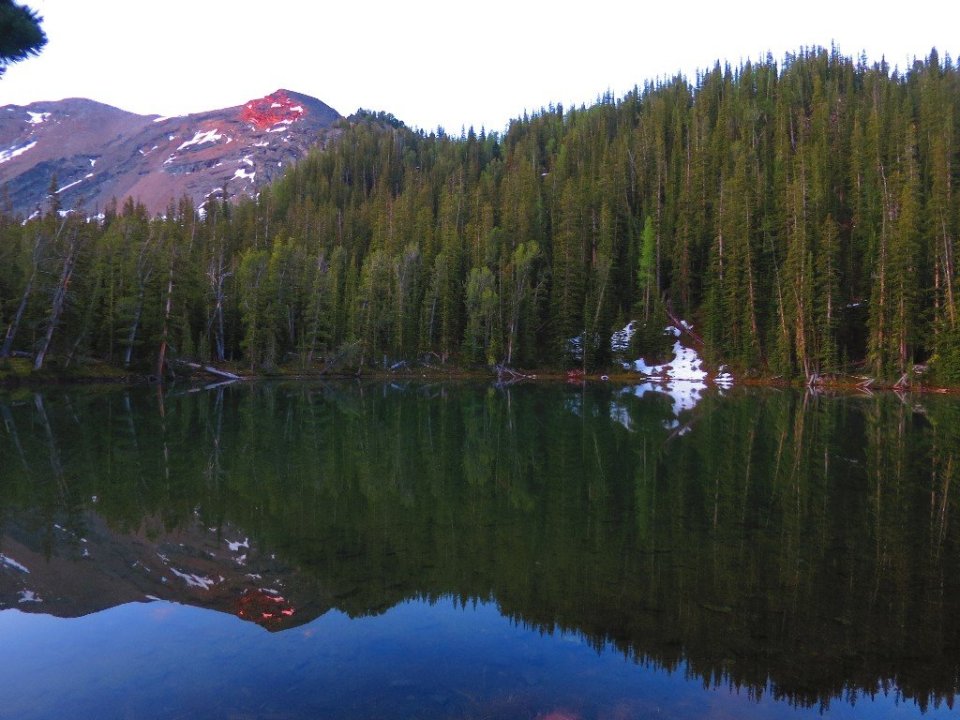 By the time we broke camp sunrise was illuminating the tops of nearby mountains. It looks like it may be a fine day. We had a big day ahead of us, four passes at over 9,000 feet with a total of 6,000 feet of elevation gain.

As we walked up and away from Page Lake over patches of crusty firm snow it was so exciting to see the surrounding mountains lit up by the sunrise and fringed by blue sky.

The first pass leading to Rainbow mountain, was simply breathtaking up on top. Not a breath of wind, completely silent except for distant sound of running water in the valley we were heading towards.

I was surprised to find AT&T phone service up on the pass. It was good to be able to send a message to the Anaconda Trail Angel network to thank them for assisting us get back on trail. 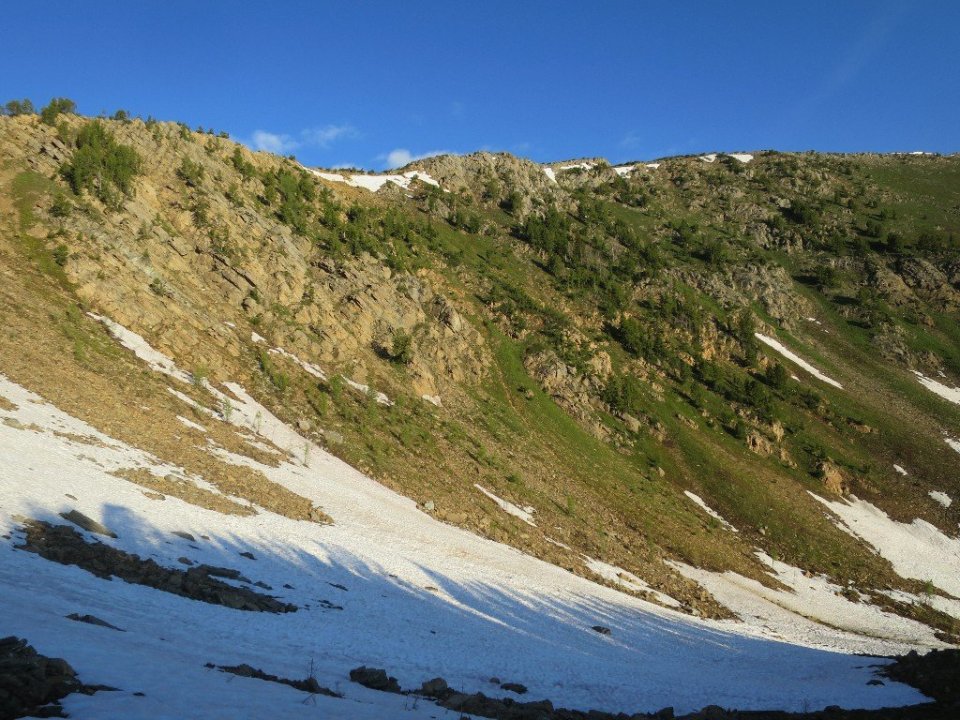 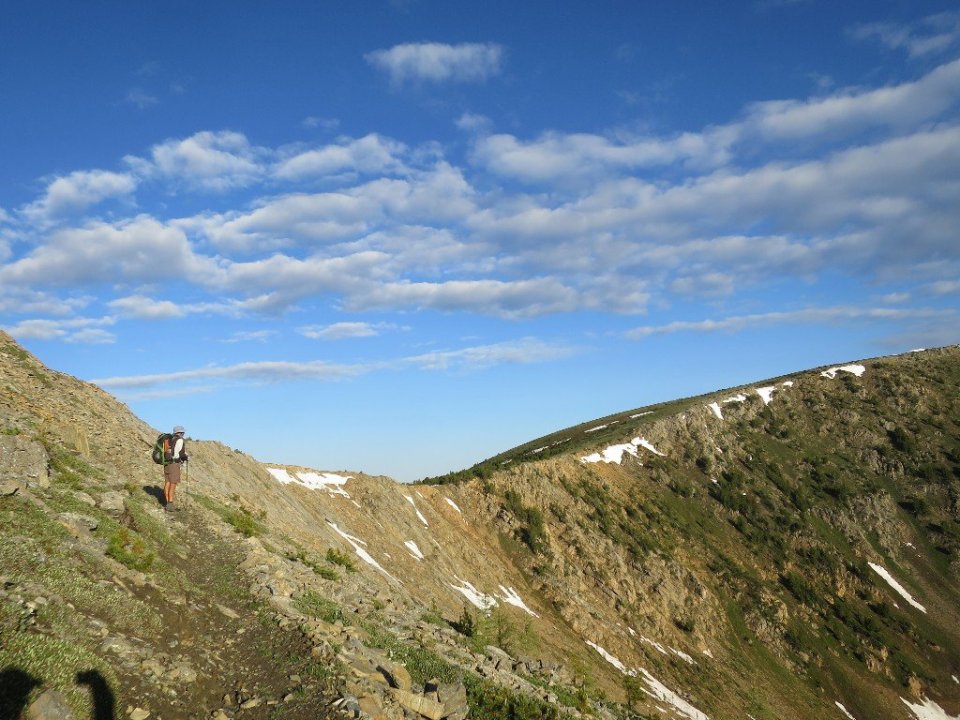 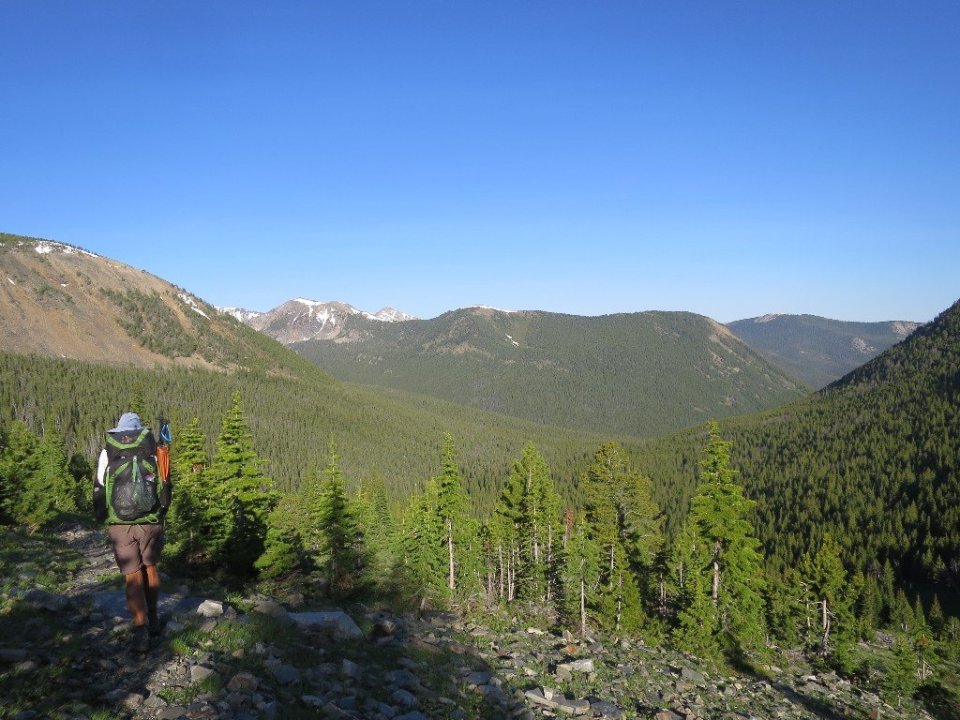 The descent into the valley was beautiful, there was no wind, no mosquitos, blue sky above, wildflower blooms and healthy green pine forest to walk through. Everything seems easier with a bit of sunshine, even the climb over the second pass, Cutaway Pass. The view back into the valley was a little intimidating, impenetrable looking dense forest which stretched as far as we could see. 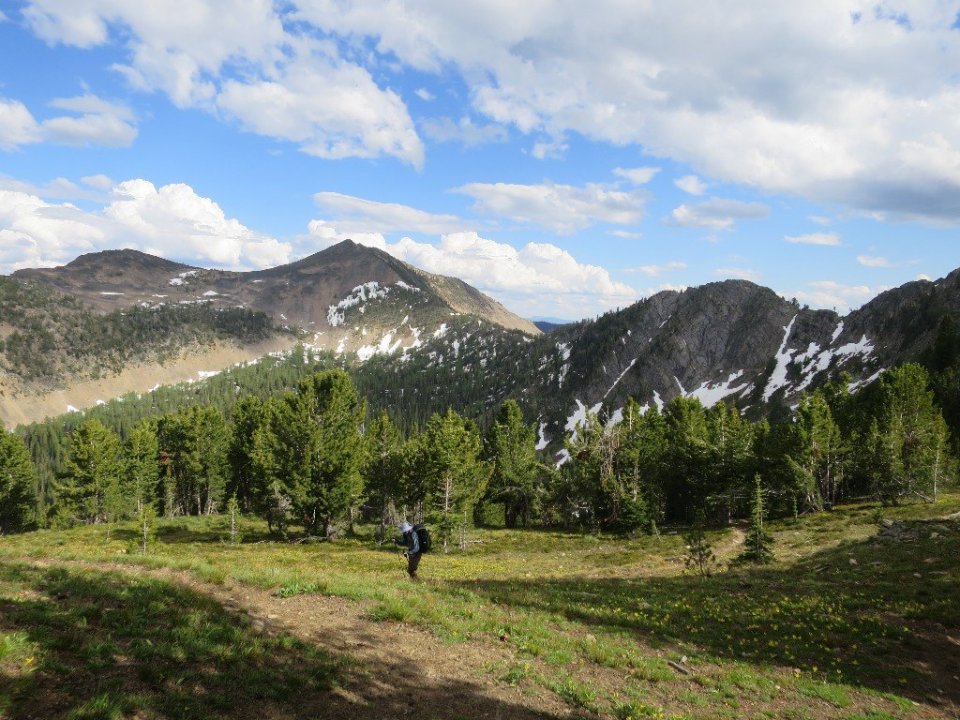 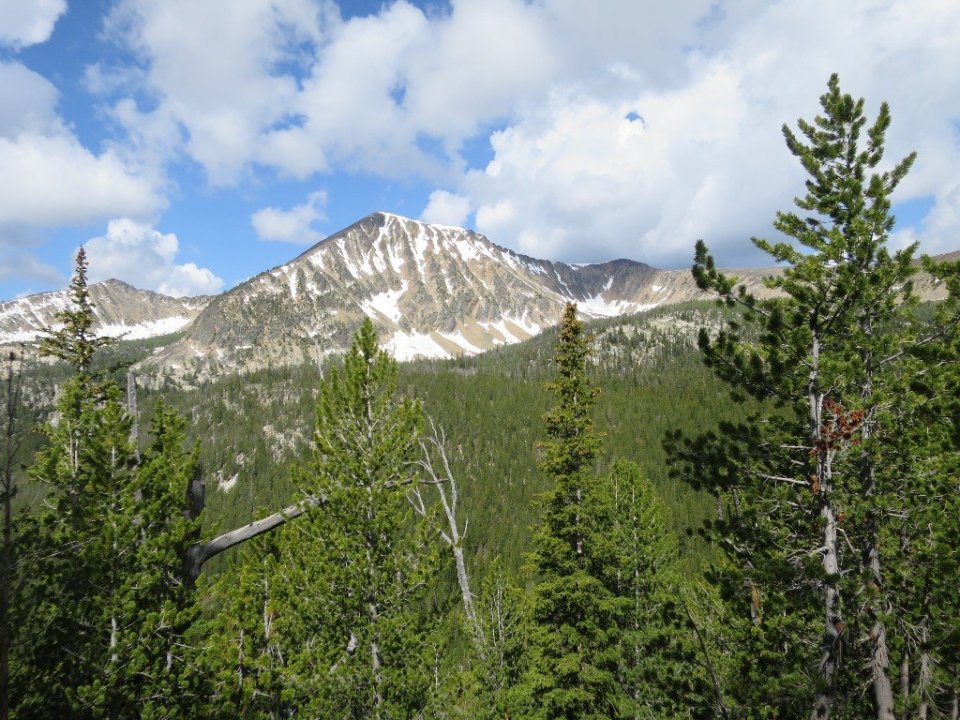 From Cutaway Pass the trail descended to a tight valley surround by challenging lookup sharp granite peaks. It was still sunny with cloud building. We stopped in the sun for lunch by a fast flowing creek. By the time we finished lunch, it had started to rain. We got out wet weather gear on and within 15 minutes, the rain stopped. So it was another stop to take rain gear off. The temperature has been so mild that it was easy to break a sweat on the climbs. 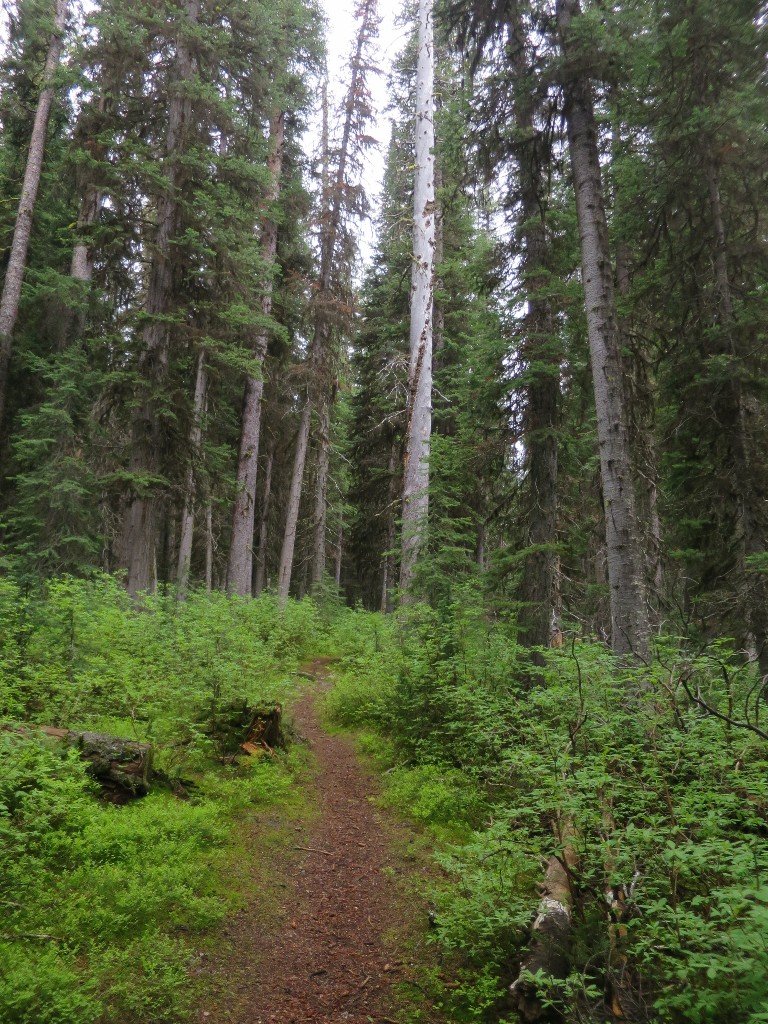 After lunch we had our third pass to climb. It was a surprise to reach the top of the climb and find the most beautiful lake on top. Warren Lake was backed by huge granite mountain which still held some snow. There were two couples camped by the lakeside with their dogs. It was so nice to see people out enjoying this gorgeous location.

The 3 mile descent from Warren Lake was through lush green pine forest strewn with huge granite boulders. They looked like enormous marbles that rolled down from the surrounding mountains. The rain had long stopped although the sky looked grey when viewed from the forest floor. 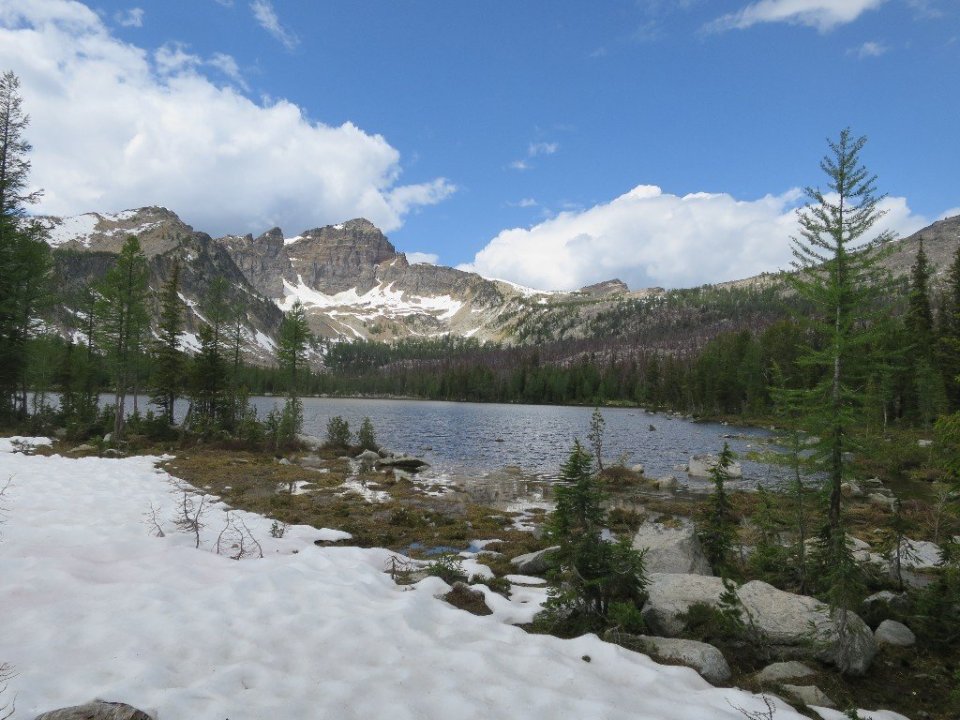 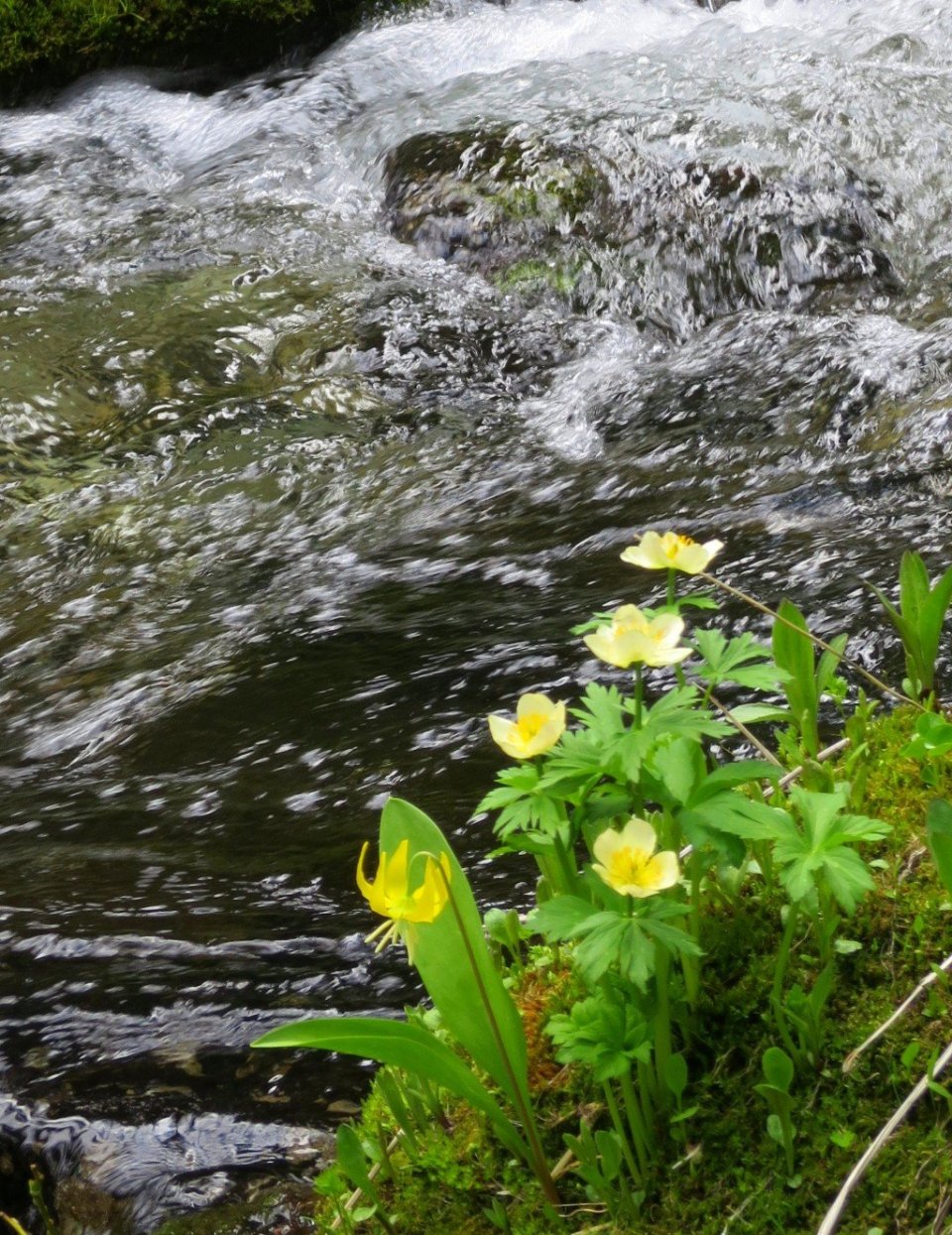 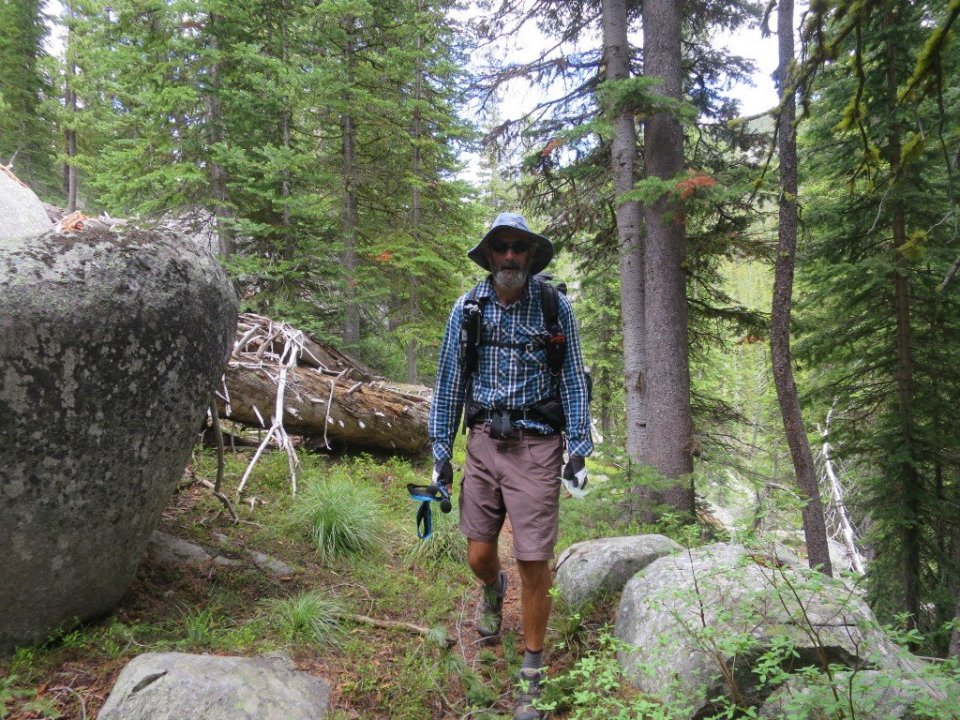 It was mid-afternoon and we still had one more pass before we reached Johnson Lake where we planned to stop for the day. The 6 mile climb towards Rainbow Pass was broken up midway by another lake, Rainbow Lake. The emerald green of the lake was beautiful. Especially when viewed against the mountainside which was carpeted in yellow wildflowers. It was tempting to stay and camp by Rainbow Lake but we were keen to get the climb over the pass completed. 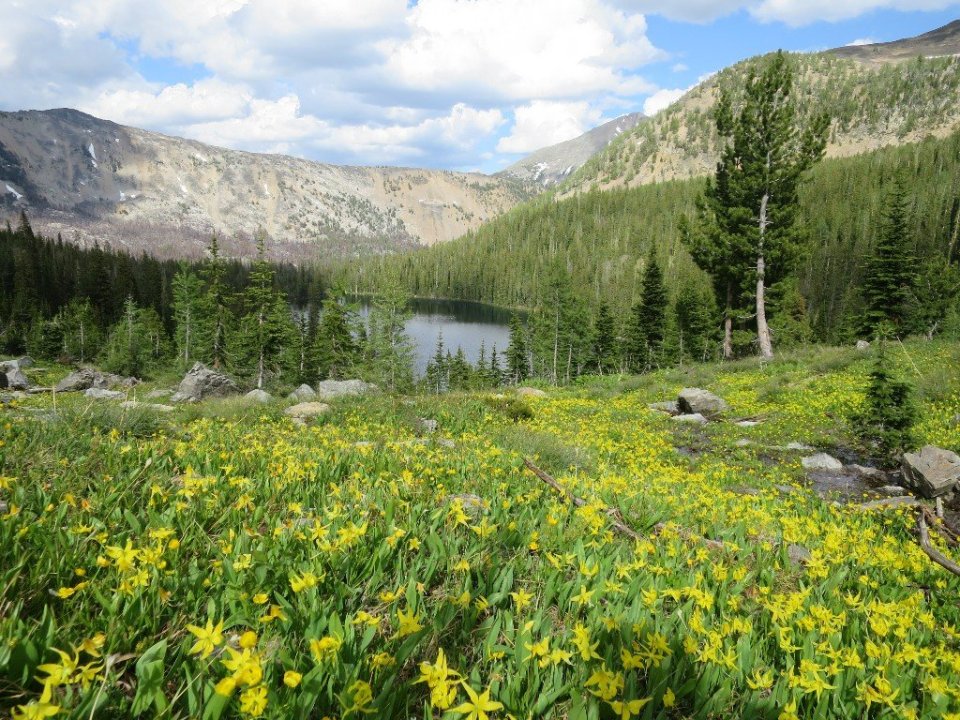 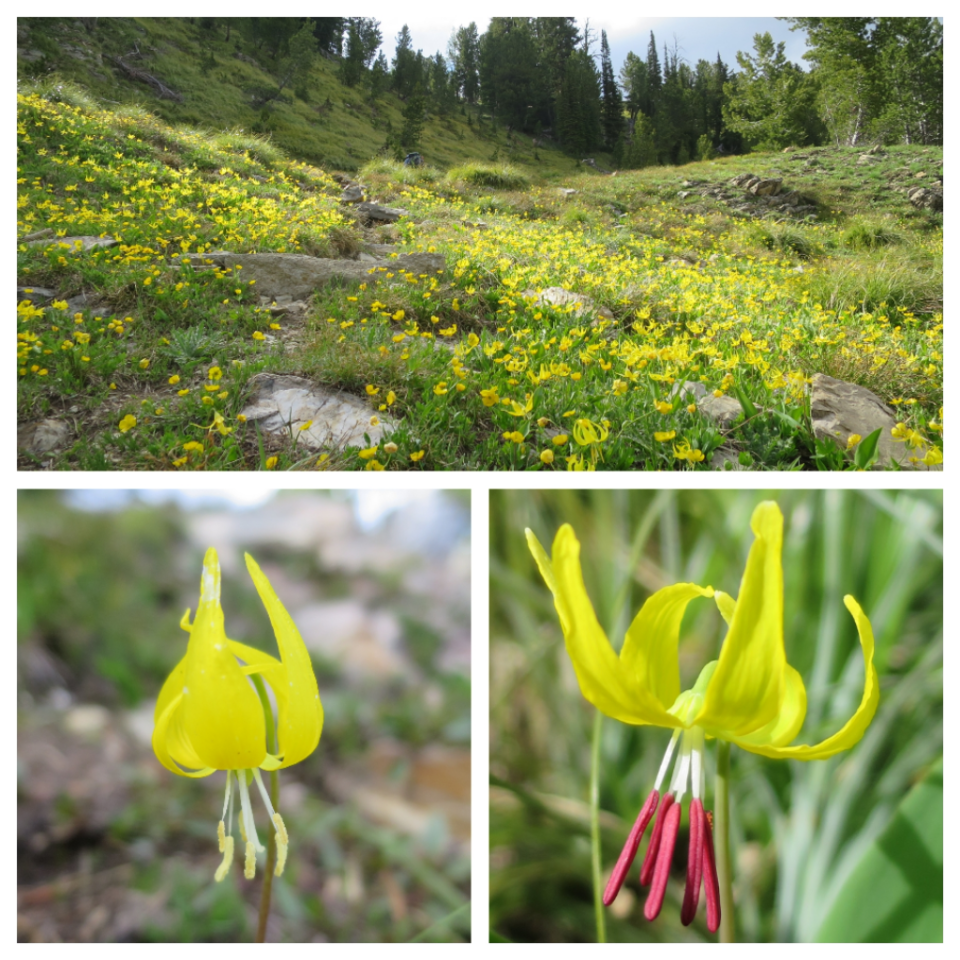 It felt like an easy climb because the views from every angle were sensational. We rose away from Rainbow Lake through a carpet of yellow wildflowers. Simply breathtaking. It was a relief to reach the top of the pass which was at 9,250 feet.

From the top of the pass we could see two deep emerald green lakes down below. One of them was Johnson Lake.

The descent off Rainbow Pass was much like the rest of the day – peaceful and quite. Just the sound of our footsteps. It was incredibly steep at the start. And we marveled at the skill of the trail builders who managed to create a trail in this environment.

It was so nice to reach the lake and get the tent set up. Rolling thunder broke the silence. But no rain came our way.

It has been a surprisingly beautiful day. Each pass and the valley below was a delightful discovery. 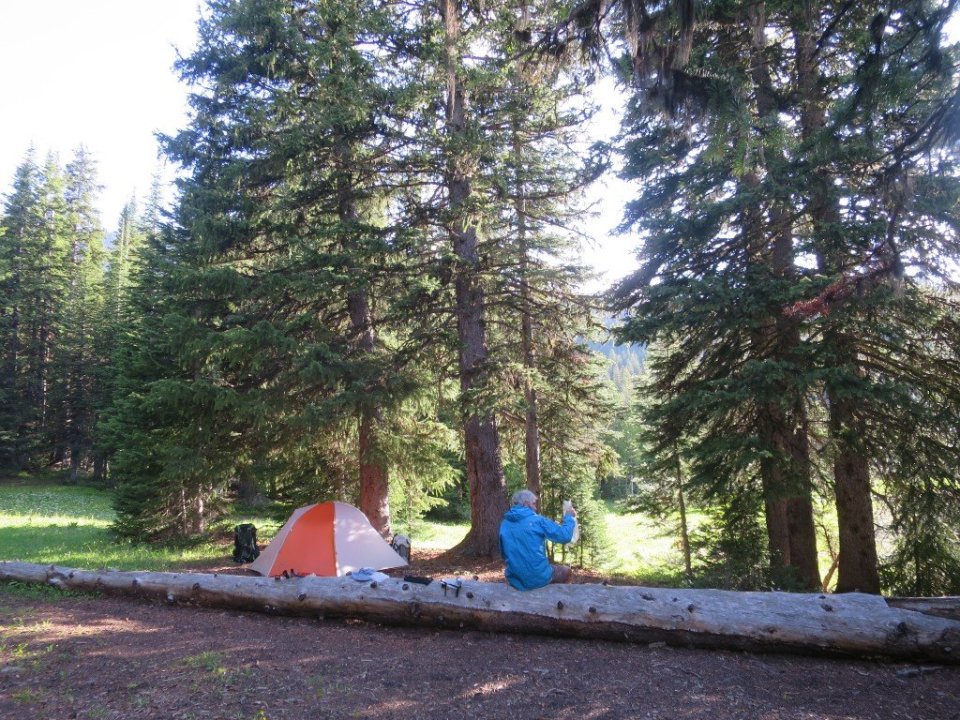