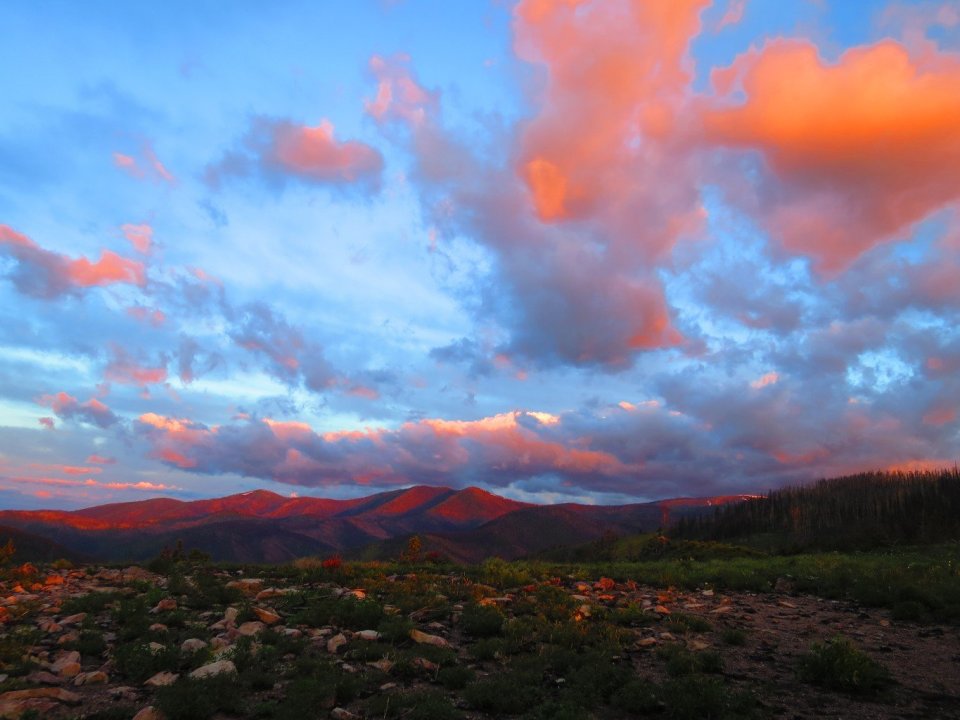 It was hard to believe that the stand of small burnt pine trees could provide so much shelter. The wind had really picked up through the night. By the morning it was so strong it sounded like ocean waves pounding onto the shoreline. Today was going to be an interesting day. We had four mountain top ridges all above 8,000 feet to traverse. And if they were anything like Black Mountain or Nevada Mountain we passed coming into Lincoln, there was bound to be some snow cover. Combined with the strong wind, it was going to be challenging.

It was encouraging that the birds were still chirping, so it can’t be that bad, I told myself. So it was some trepidation that we broke camp and set off this morning.

It has been hearbreaking to see the extent of the fire damage to this section of the forest. Some sections were destroyed so thoroughly that not even the grass has come back. 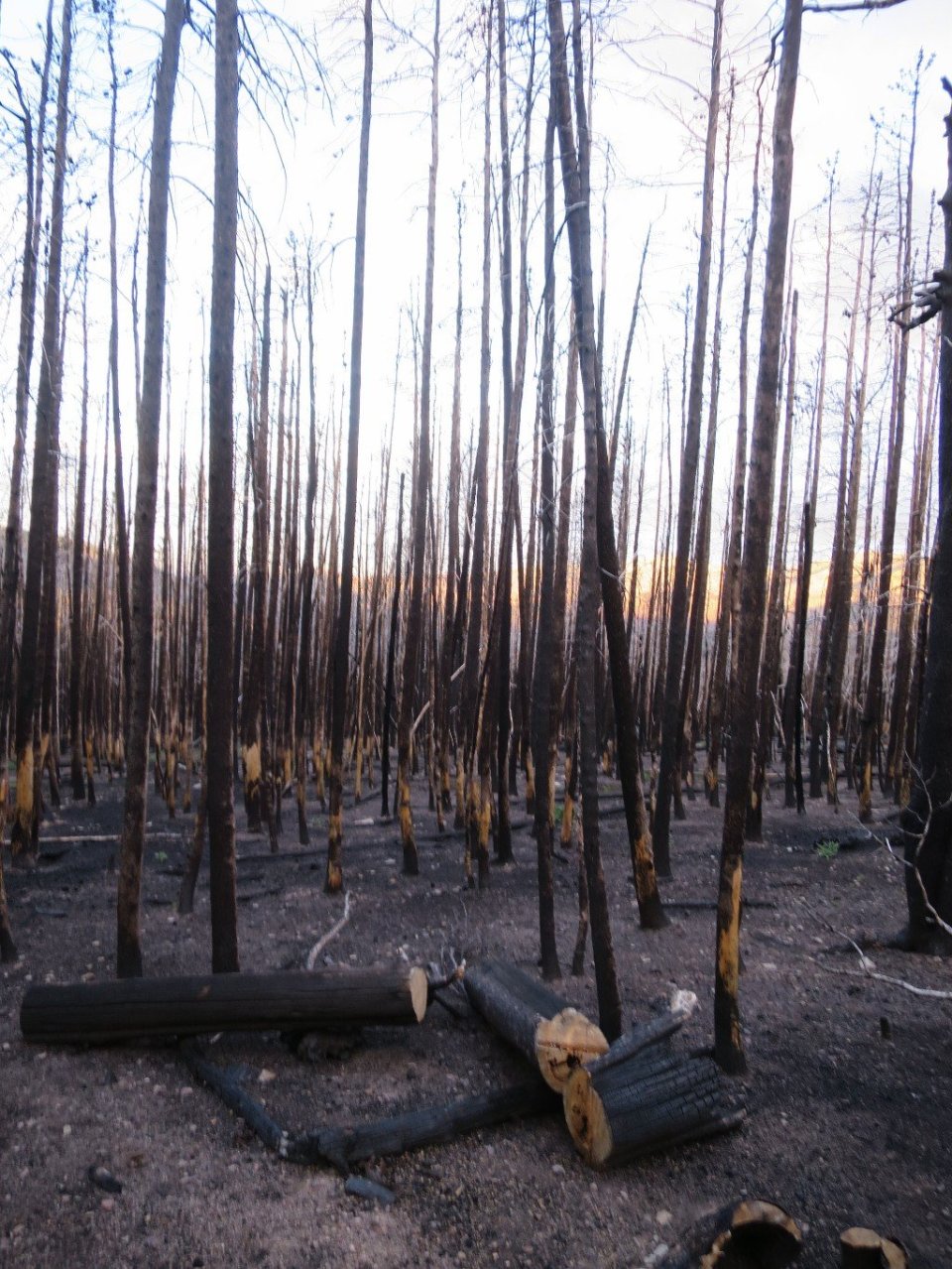 It wasn’t long before we climbed onto the ridgetop. And just as expected the wind was howling and it was freezing cold. The wind was so strong it was blowing me sideways even with the heavy pack.

It would abate slightly as we dropped down the undulations between peaks. The scenery was pretty stunning especially with the dark cloud hanging low on the horizon. 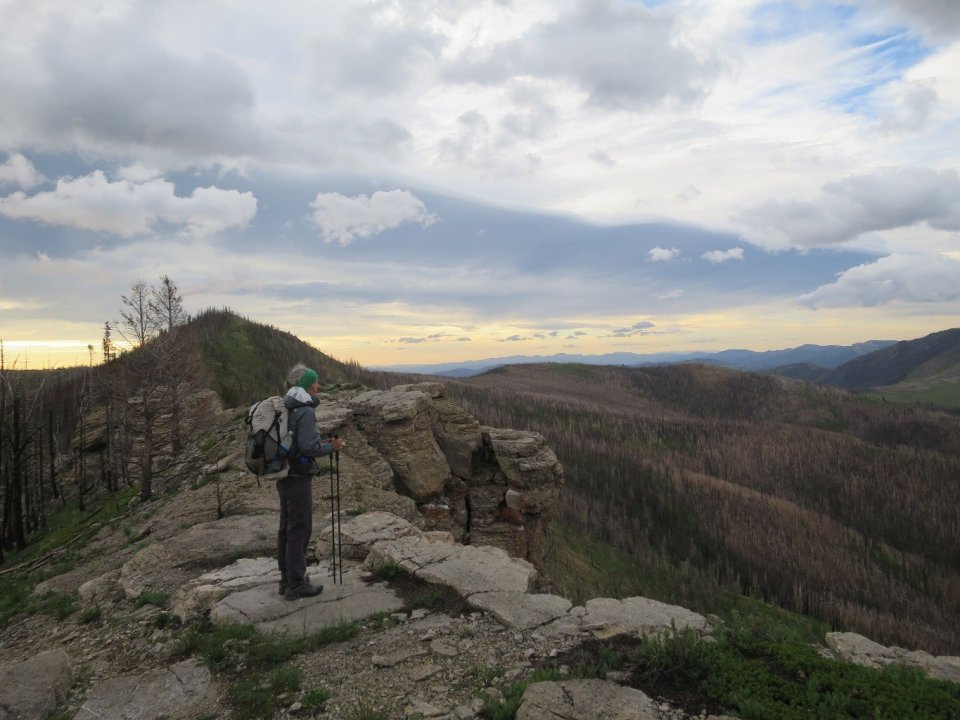 Wildflowers were just as prolific as yesterday but it was hard to stop to take photos as the wind was knocking the camera out of my hands. It took us till mid afternoon to come off the highest peak which was at 8,400 feet. There was plenty of snow cover over the trail in sections. This made for slow progress and eventually wet feet. 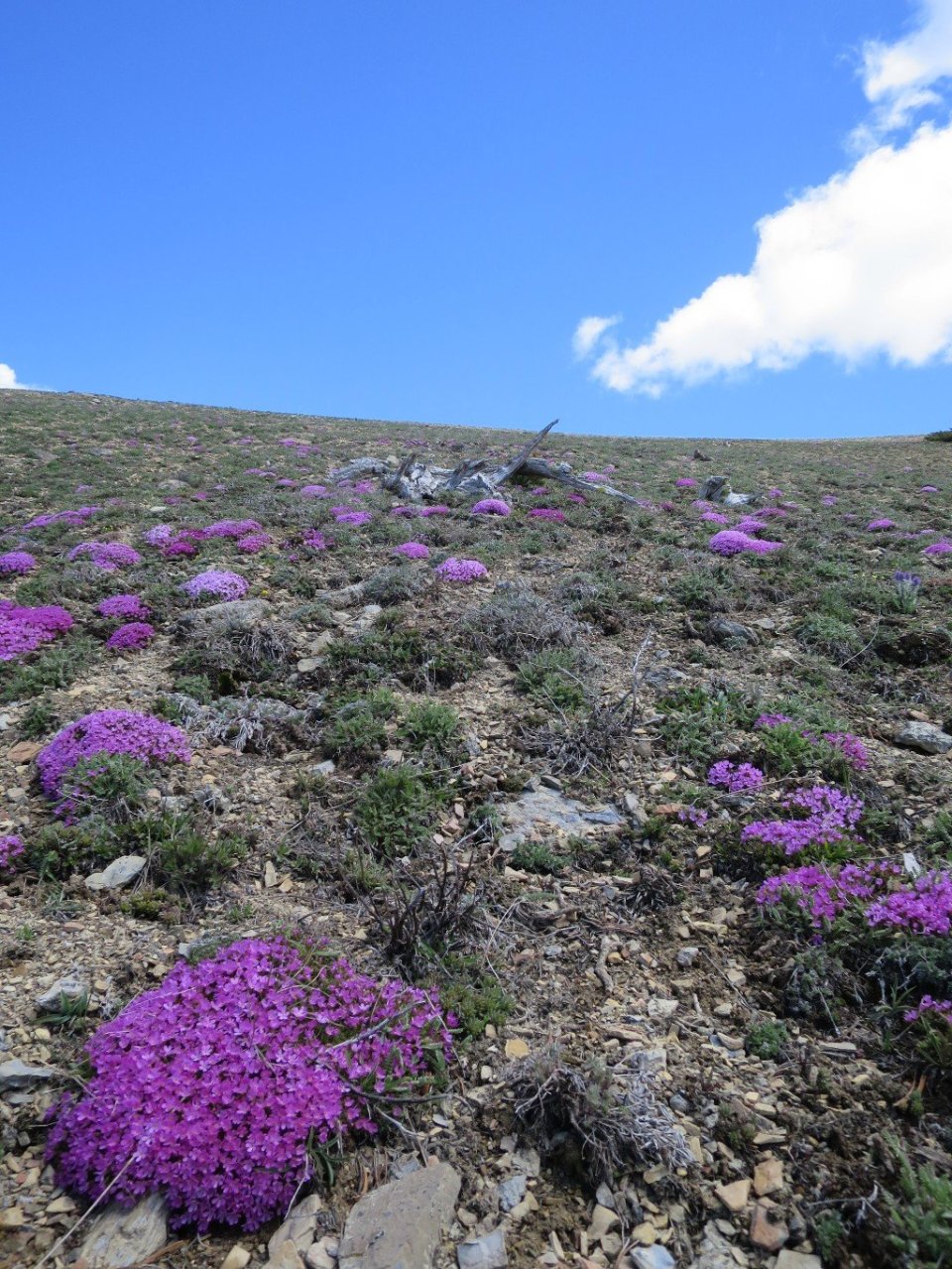 Our attention most of the early part of the day was taken by lots of grizzly prints on trail. One set was going in the opposite direction the others were going in our direction. There were also shoe prints of another hiker in front of us. These tracks in the snow were being followed by what looked like a mountain lion print. Despite the evidence of recent grizzlies activity we did stop for lunch by a beautiful ephemeral lake. It was shallow and a most beautiful emerald green colour. And it was also protected from the wind.

Climbing back out from the lake we traversed a series of steep and exposed sections of trail. Fantastic view from the top towards another lake surrounded by snow drifts. The wind was so strong we were being blown sideways. We couldn’t wait to get off the ridgetops.

Descending off the last high peak by mid-afternoon we were hiking through a series of creek gullies. Surprisingly the wind was funneling through even here. It sounded like a jet engine was running on the other side of the hill. And soon it started to snow. This day just kept on giving.

By late afternoon we descended through a green pine forest for a couple of miles to Dearborne River. We were exhausted by the big climbs, the wind, the snow and the river crossings which seem to go on forever. We could not stop for the day until we crossed the river one more time so that we wouldn’t have to do it first thing tomorrow. That was our final chilly challenge of the day before setting up camp. It’s been a tough day, with fantastic scenery.

← FORGET ME NOT
SNOW STORMS →