It was so nice to be warm and dry, even if we were camped by the side of a road. In the early morning the lights of the Ethete township were sparkling just before sunrise. As the sun came up, the view from the tent towards the Wind River Range was stunning. The snowy peaks of the range were perfectly framed by clear blue sky. 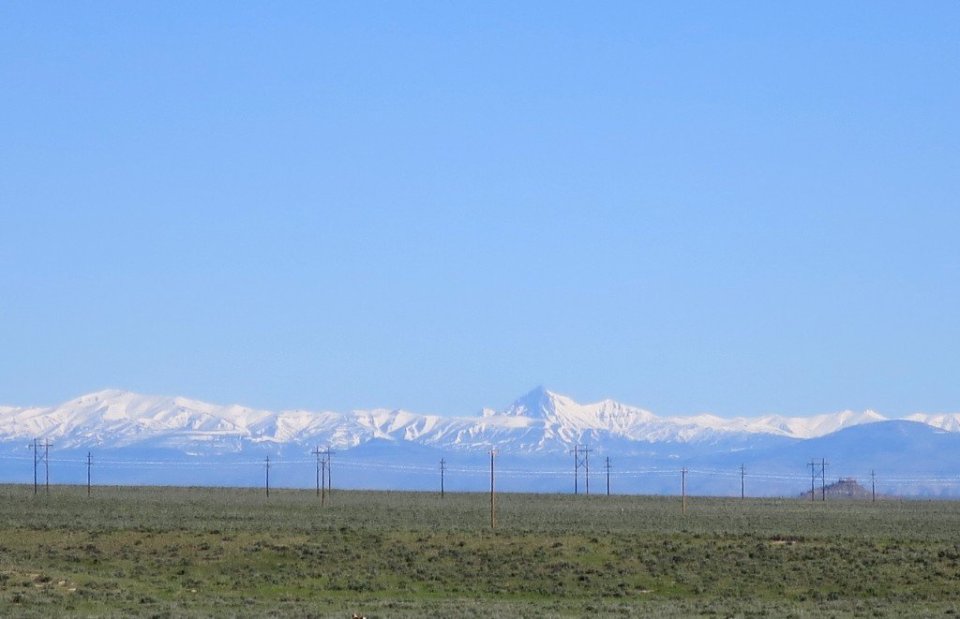 I was slow to get going, perhaps still a bit exhausted from yesterday. Late in the day I realised that the mapped route we were following took us through Indian Tribal land, and going through without permission would be problematic. So from Ethete we decided to just stay on the Blue Sky Highway till its junction with Route 26. This added quite a few miles to our route. Lesson for new players in route mapping, local knowledge is invaluable. But for now we didn’t mind the extra miles, the weather was good and the road was not busy.

We waited for a gap in the passing traffic to pop out out of our stealth camp site. It was a lovely temperature to be hiking. The road continued to rise and each time I looked back, the town looked smaller and smaller and the mountains loomed larger. Since leaving Lander we have been walking through Shoshone and Arapahoe Tribal Lands in the Wind River Indian Reservation. Since being on the Blue Sky Highway almost every car that came past us waved and smiled.

Yesterday we had 3 cars offer us a ride. And today one of them, a local Indian couple, came back past us to make sure we were OK. It was so friendly and in hindsight there was a slower pace to traffic movement along this section of the roadwalk. 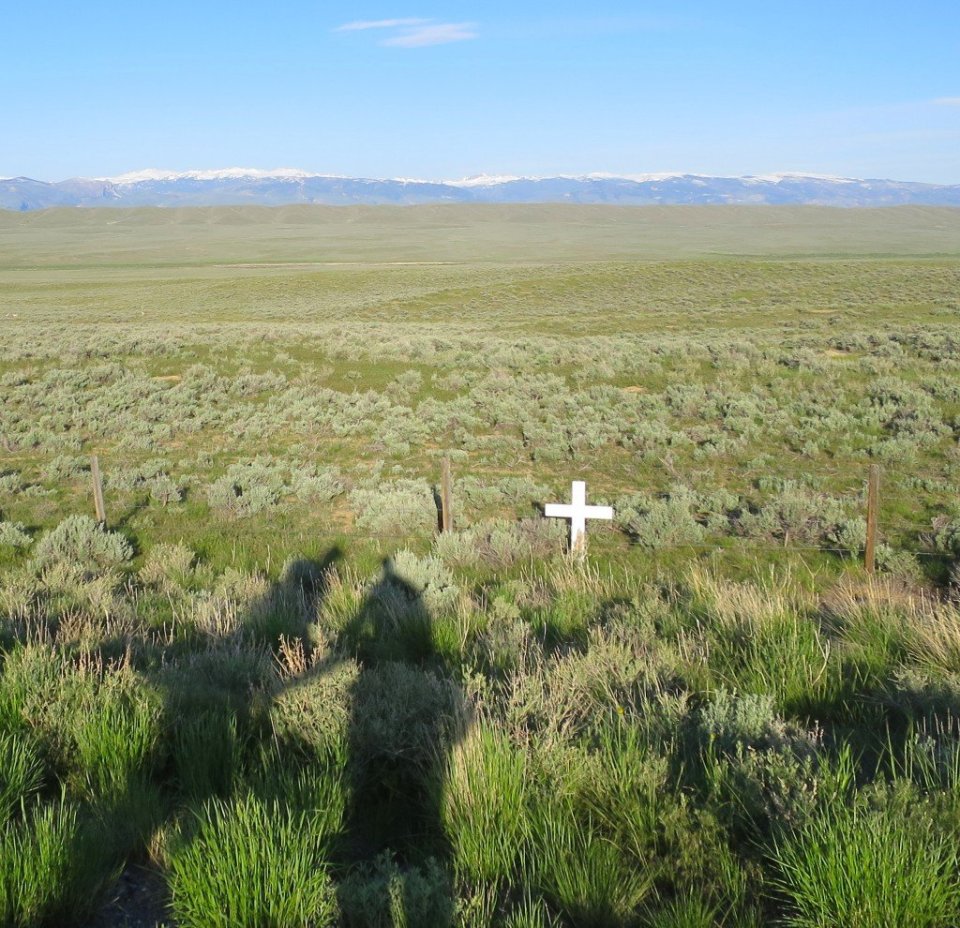 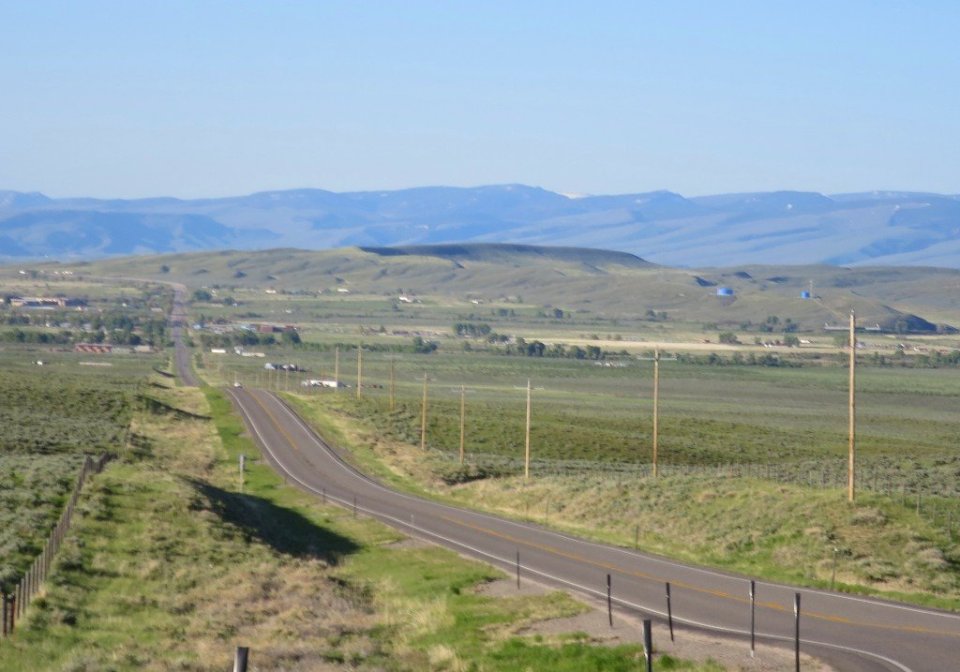 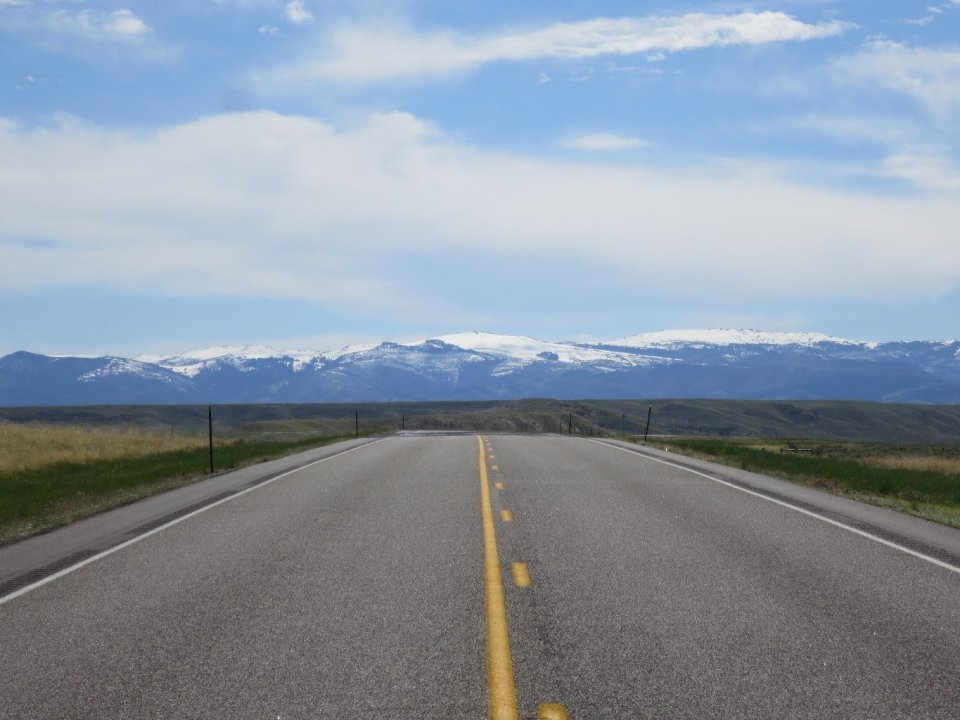 Just before we joined Route 26, we crossed the muddy waters of the Wind River. It seems to carry a huge sediment load. It is hard to imagine that this same river carved the huge canyon which we followed later in the day along Route 26.

As we walked along the canyon-like walls of the river became the predominant feature. The snowy peaks of the range were the backdrop. Farmland began to look more lush and green. It was quite a change from the sage brush pastures along the Blue Sky Highway. 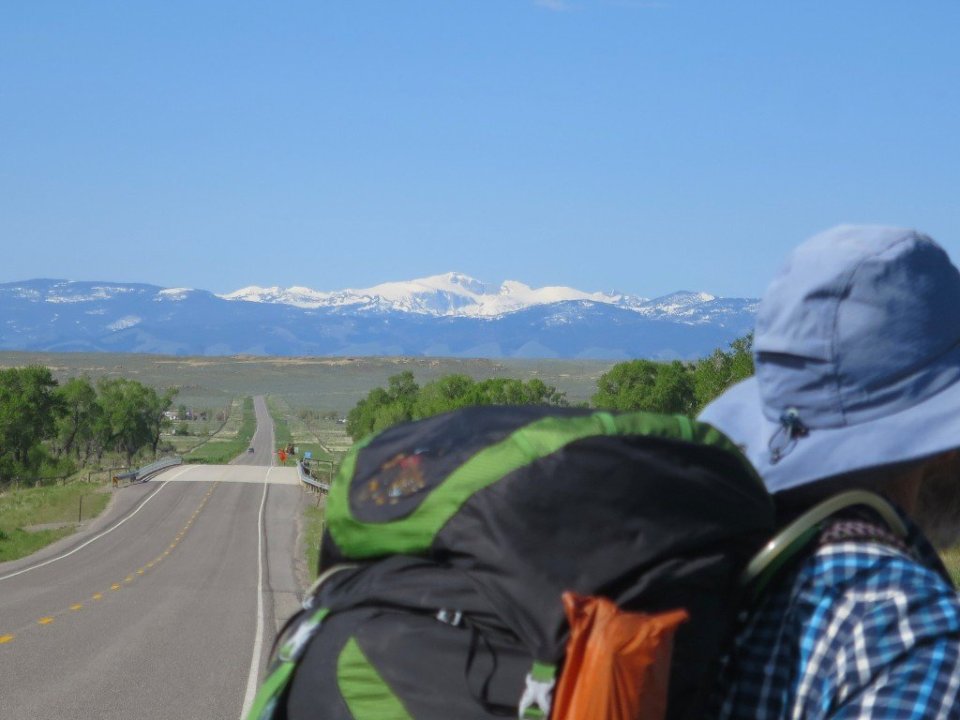 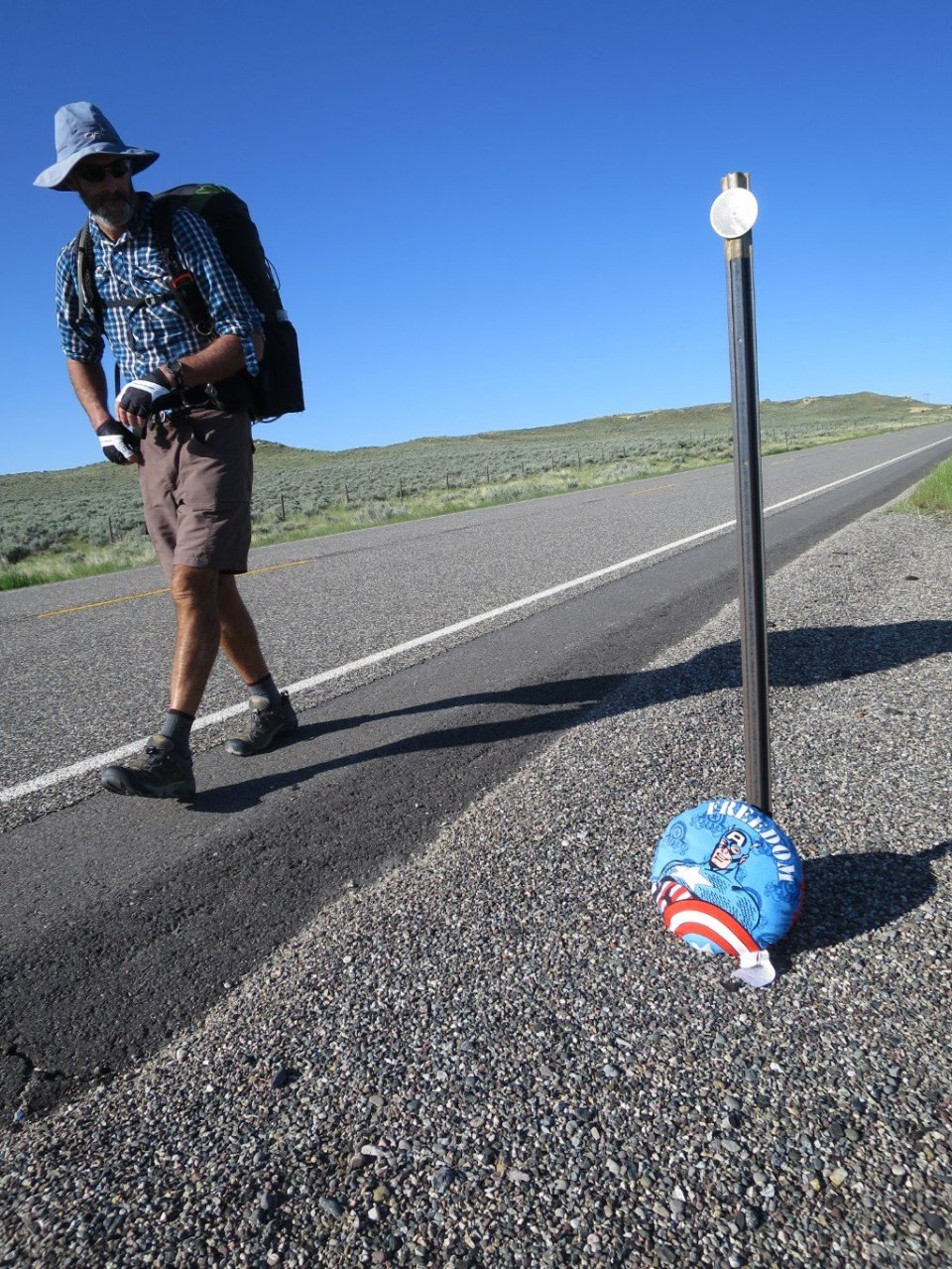 Our lunchstop was by the huge Pilot Butte Reservoit. A shady spot, by the clear blue water was a perfect antidote to the traffic on Route 26 and the heat of the day. It was such a nice spot, it was hard to leave.

From the reservoir our map showed that it was possible to get off the highway and hike the Dam Diversion Rd. But when we got to the turnoff, it was a private road with ‘No Trespassing’ signage. So we stayed on Route 26.

Time seemed to slow and everything started to drag out. Traffic was zooming past. We were now walking towards the mountains. A few times it crossed my mind that my trail is over there in those mountains, what are we doing road walking? The afternoon roadwalk felt super hard. I was dreaming of that beach shack in Mexico. And counting the minutes till we reached the Dam Diversion Rd where we were going to turn off and try to camp. The Diversion Dam is the split in the Wind River where the Wyoming Canal was created to provide water for irrigation. This time the road was there and the park shown on our map was also there. Lots of flat campsites by the River, and off the busy road. We were both trashed and fell asleep as soon as we got horizontal. Tomorrow Route 26 joins Route 287 which is the main north to south through Wyoming. Let’s hope tomorrow brings renewed spirit and refreshed feet. 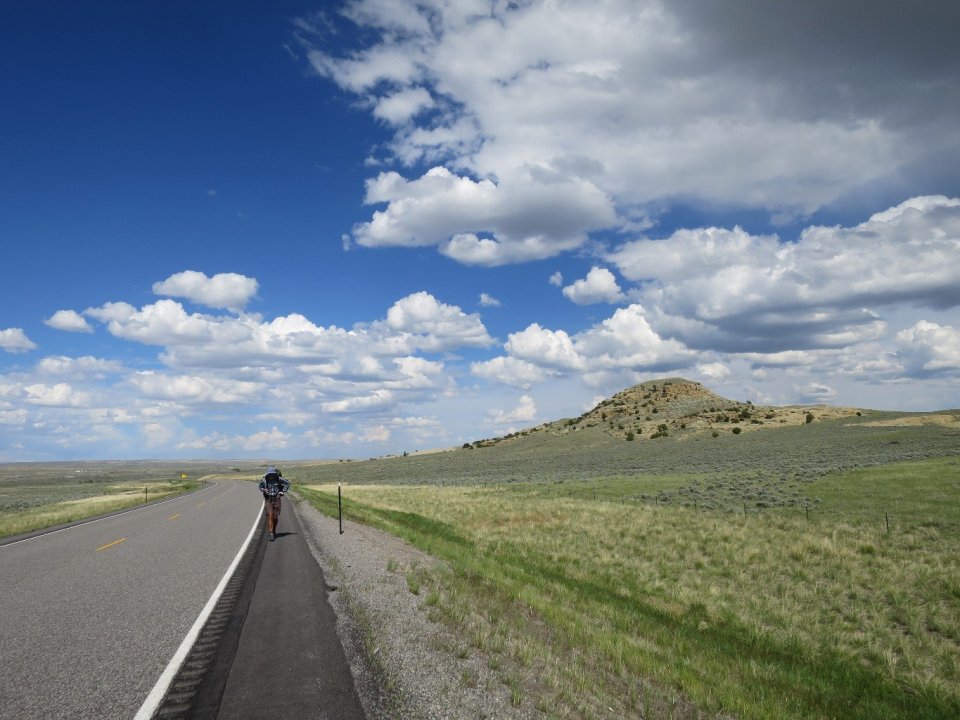