Today might have been all road walk but WOW!!! what a road walk.

I would never have thought that stealth camping alongside a road could produce such a restful nights sleep. It was quite and it was warm. Only the twitter of birdsong broke the silence this morning. It was perfect. By the time we broke camp and were on our way at 6am only 2 cars had driven by.

The sky was overcast as we hit the road for a daylong roadwalk on State Route 117. The road passes through the El Malpais Conservation Area.

It was a pleasant enough start, we were fresh and rested. In the distance I could see the sandstone cliffs we were heading towards. The cliffs are part of a feature on our map called The Narrows. As we approached The Narrows a car pulled up and asked if we needed water or anything else. We had enough water so they offered us freshly baked mango and banana muffins. First WOW moment, so unexpected, so appreciated We were eating these delicious muffins as we entered The Narrows. It was mindblowing, huge sandstone cliffs on our right and folded lava flow rocks on our left.

Red flowering cactus stood out beautifully against the black of the laval rocks. The lava rocks looked like folded pastry. We were walking along like kids in Disneyland, it was incredible such a surprising feature. We wound our way though The Narrows for about a 3 miles. The high sandstone walls echoed to the sound of our voices.

As we were walking along still gawking at the cliffs, 2 ladies pulled up in a car and offered us water, which we gratefully accepted. I was beginning to worry about perhaps running out of water before the end of the day. Amazing generosity. Second act of kindness in this incredible landscape.

Leaving The Narrows the road started to descend. The sandstone cliffs continued on as did the lava field. Just before the road leveled off we passed a huge sandstone wall which was eroded though the middle creating an arch. We stopped to have a look at La Ventana and we had our third bit of trail magic. Here we met Charlie, who said he saw us walking on the gravel road yesterday when he drove through in his caravan. Charlie is New Mexican born and bred and is now retired and runs hunting trips. He offered us a beer which was very welcomed being so close to lunchtime. We chatted for a while and just before he left he gave us a gift, a bottle of red wine. How could we refuse such generosity. And as we are heading to Grants tomorrow it will not be a long carry. 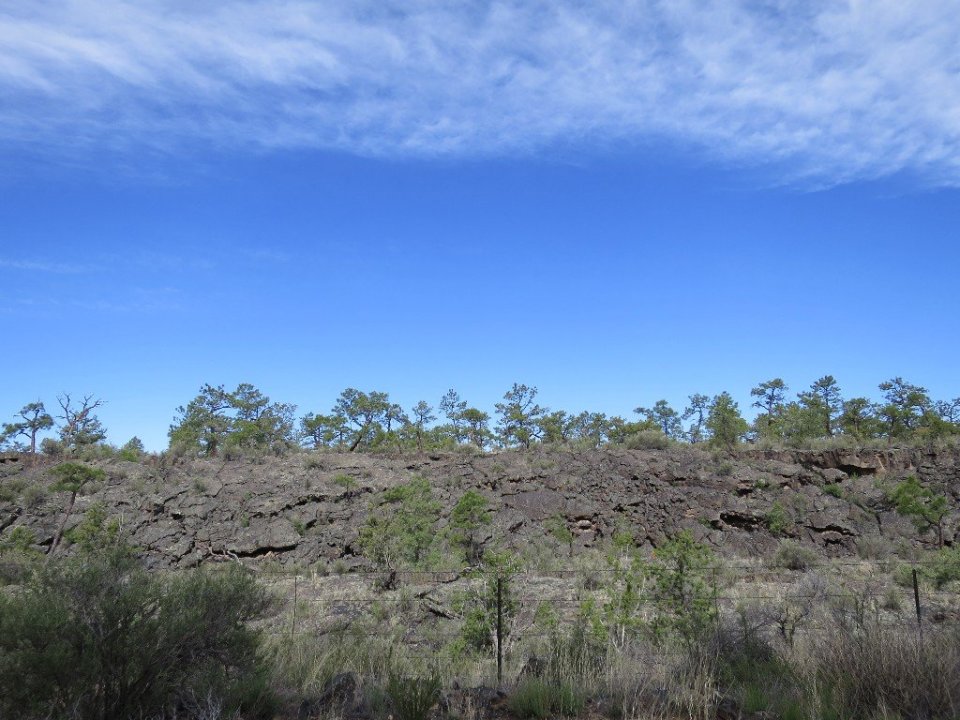 This road walk has been incredible so far. Amazing landscape and amazingly generous people.

We had a couple of miles on the Cebolla Alternative Route before we rejoined the CDT, which then continues on Route 117.

At the trail junction we stopped for lunch. It was nice to have an area off the road to take a break. We were running low on water and still had 6 miles to make it to the Rangers Station which Charlie told us definitely had water.

Dark clouds were gathering to our right and the sunshine on our left illuminated the sandstone cliffs, creating such beautiful contrasts. We made the Rangers Station around 4pm having about a cup of water left. I had my fingers crossed that Charlie was right. Just as we were about to cross the road to go to the Rangers Station a white van pulled up. The lady driving asked us if we would like some trail magic, unbelievable. So we met trail angel Solo, who filled our water bottles, gave us cold soda, chips and bananas. I had not realised how much I’d been rationing my drinking water. I was so thirsty now that when water was available I drank a litre and then had a strawberry soda. This lady was a true angel today. 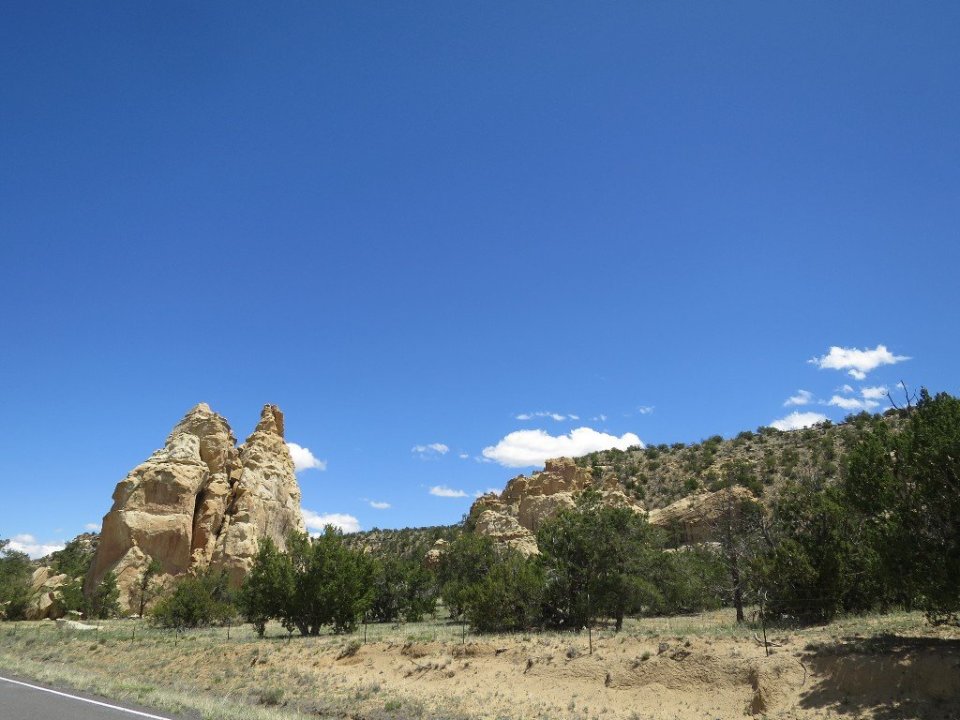 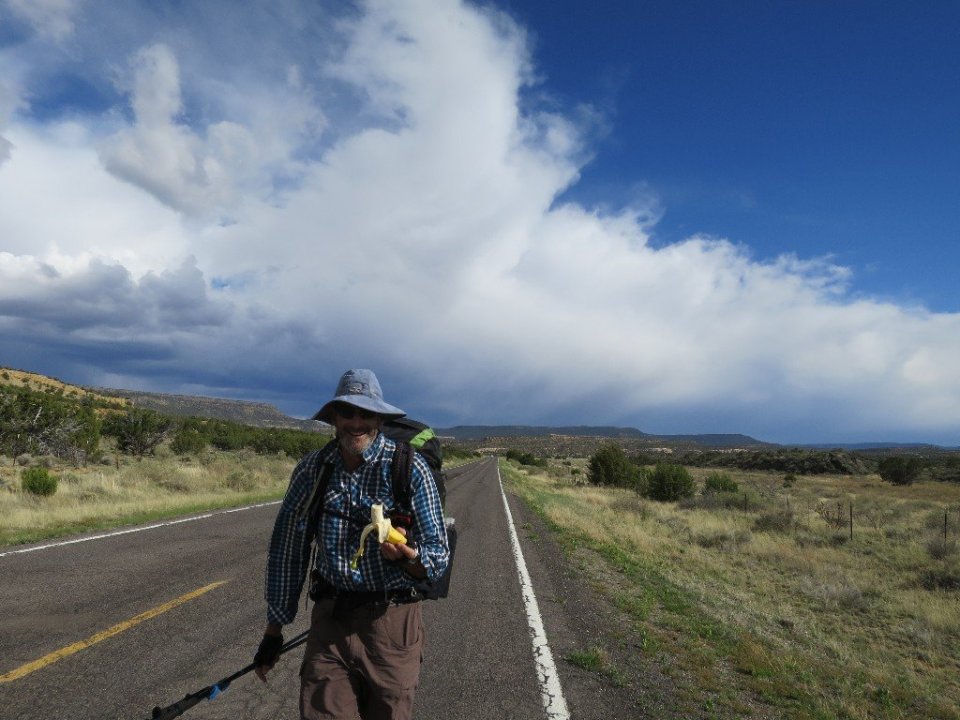 We spent about half an hour with her before saying goodbye. We aimed to get close to the I-40 and Grants so that we wont have a long walk into town tomorrow. The sky was turning dark blue and streaks of lightening lit up the sky behind us. The wind was coming from the opposite direction so we thought the dark clouds were being blown away. Hammer found a gap under a fence and we crawled under for another night stealth camping by a roadside. 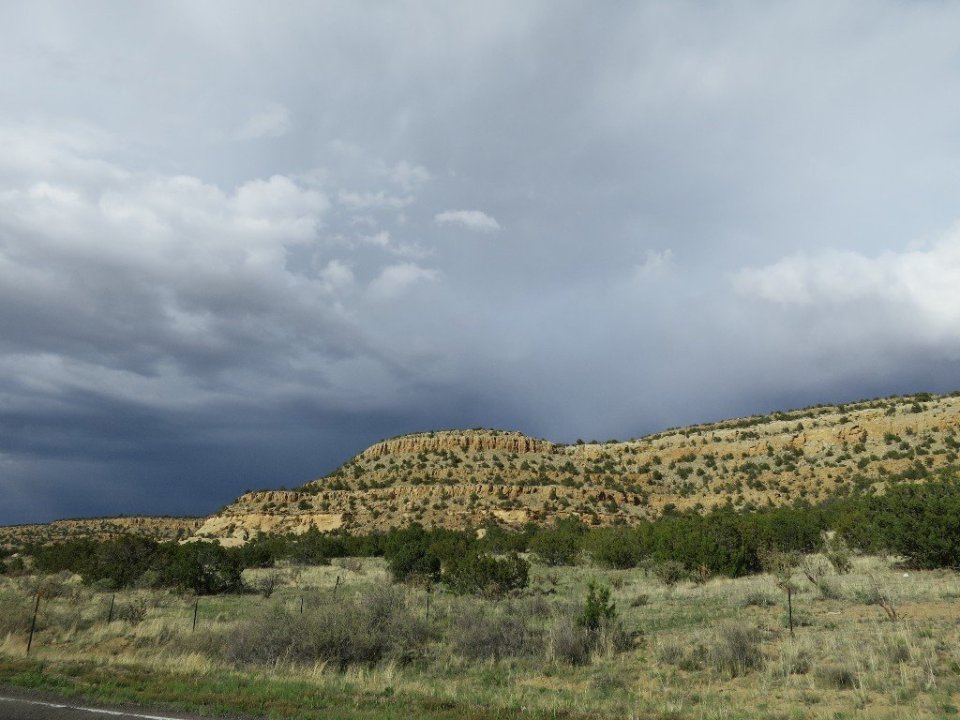 The day has been full of surprises, incredible landscape and amazing people make for an even more memorable day on the CDT. Just as we were settling into our sleeping bags the rain started. So good to be under cover, although this rain storm did not last.

As we were close to the I-40 we had AT&T phone service for the first time since Silver City. It seems that the week ahead will be cold, wet and snowing at elevation.