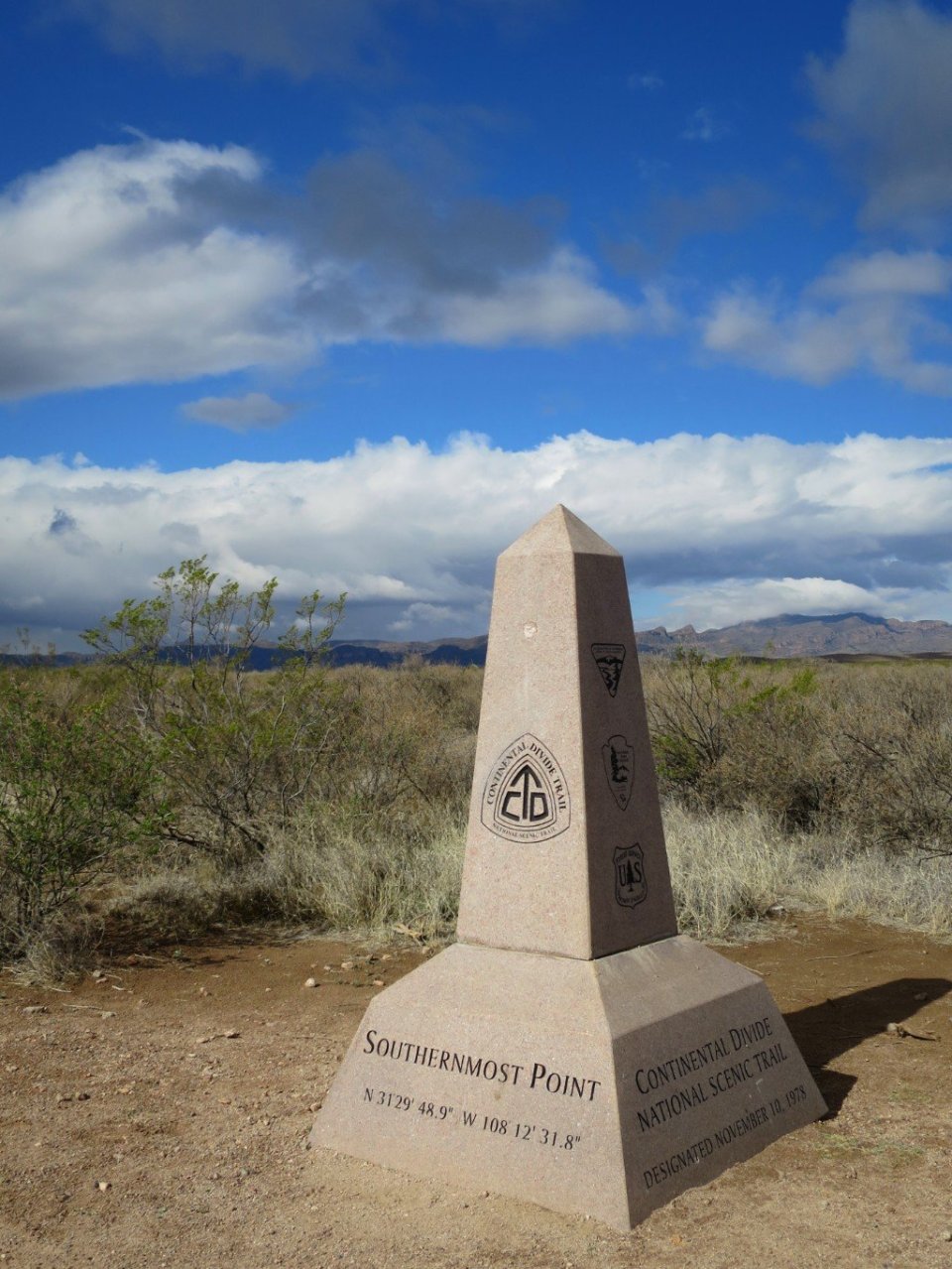 The year of the Pig is continuing to prove inauspicious for us, and today was no exception. The thunderstorm that rolled in through the night stayed around, knocking the power out in the town at some stage through the night. We woke at 5 am to continued rainfall which eased off by the time the shuttle to the start was ready to leave the motel an hour later.

Even though the rain had stopped, it was quite cold. There were seven other hikers on this mornings shuttle. The drivers, Radar and Ray did a quick intro and by 6.30 the two pick-up trucks rolled out. Hammer and I being ever so slow or extra polite, I don’t know which, ended up in separate cars. This was not a problem as we were travelling in a convoy and stopped along the way for a short break.

The sky was an incredible inky blue as the sun started to rise. And through any breaks in the cloud the sunrise lit up the silvery grassland we were passing through. I was itching to stop the truck to take some photos, but this was not going to happen. The through windscreen photo will have to do. As the saying goes, every cloud has a silver lining and this morning that was proving to be spectacular. The light display on the surrounding mountains as we neared the Crazy Cook monument was something quite special. 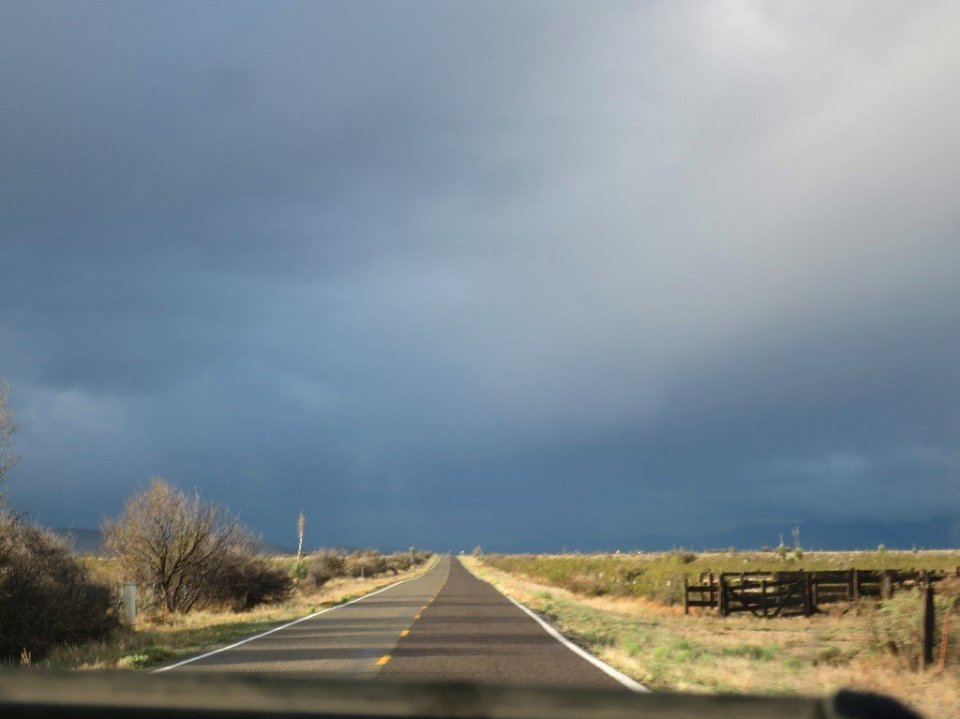 We got there just after 9.30am and took a few photos at the monument which was literary in the middle of nowhere. We were incredulous, is this really the border. Ray our driver told us that just over the border, on the Mexican side was a Mennonite farming settlement. That explains the green circles on the satellite images I saw on Google Earth. 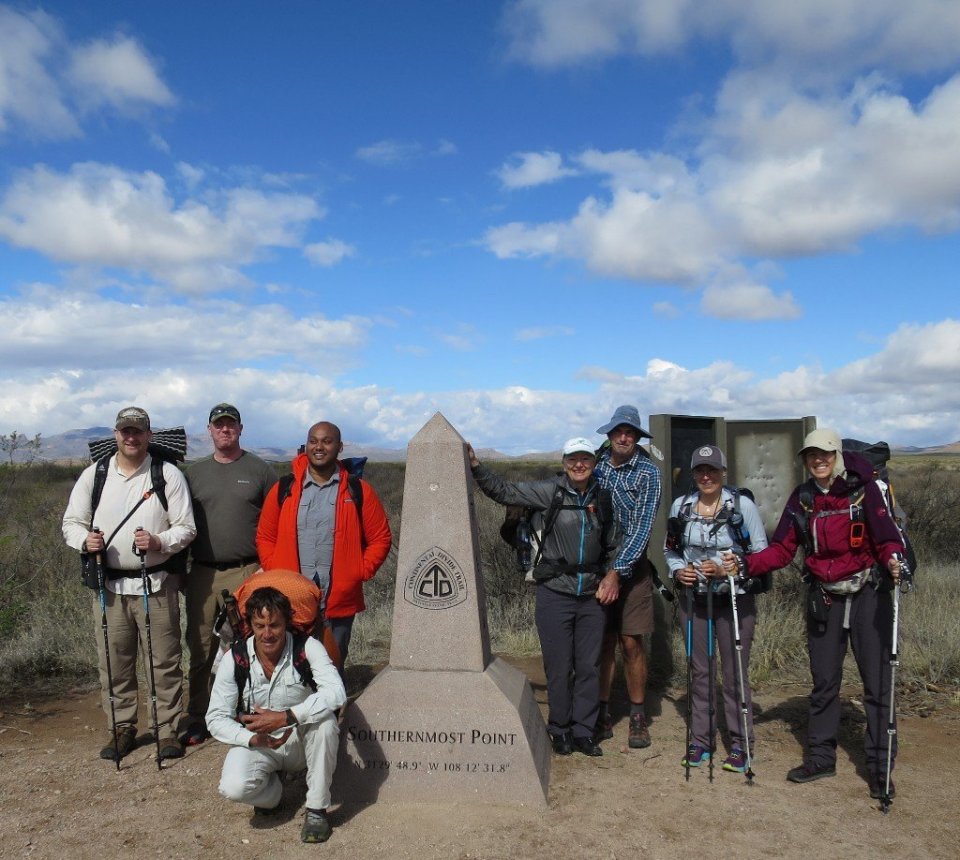 With the weather being so unusually cool we were to keen make tracks. After a few more photos, we were so happy to be finally on our way.

We started from the monument with Emma (Coffebean) who was in our bus from Phoenix yesterday. We learnt she was in the Swedish military and is a robotics engineer. The trail was well marked and while rocky underfoot was not overly difficult to walk on. I kept stopping to take photos of the brilliantly lit mountains which looked quite stunning against the darkened skies.

Less then an hour in we came come across a bogged vehicle whom our drivers were trying to assist. It seems the bigger truck was on a rescue mission for an injured hiker at Mile 3.5. Emma had miles to make so she took off and that was the last we saw of her.

We stayed with the vehicles for a bit, helping to push but it did not budge. The driver started to dig out the wheels with a frypan, so we took off with another hiker Mike (aka Daybreak). Mike is hiking to raise money for a cancer charity. We later learnt that his trail name comes from his habit of waking at 3.30am and hiking soon after.

We walked with him for a bit before he stopped to dry his feet. Something we have found helps with blister prevention. We were now hiking in a creek bed strewn with rocks which made for tough footing.

The rain had come back briefly and stopped before we got too wet. One of the constants since we left the monument has been the wind, it was strong and came side on from the northwest. We passed a creek bed that was out of the wind and it made a perfect spot to stop for a lunch break. The creek bed was lined in a flowering bush whose flowers resembled very fragile rose petals.

After lunch the trail stayed in the creek wash till we reached the first water cache at Mile 14. We found 3 other hikers had already camped there. There are five water caches in the first 85 miles of the trail. These are provided by the CDT Coalition as part of the hiker shuttle service. It is tough waterless section in the desert. And while there are some water sources along the way, they are generally cattle troughs and we would be taking water from cattle.

We stopped to cook dinner at the water cache and took a longer break before hiking on. Although we both had quite tendererised feet, we decided to take advantage of the cool condition to hike a little bit further.

From the water cache the trail changed completely. We were now hiking on rough cross country terrain through very spiky vegetation crossing numerous gullies running off from the mountains to our left. This made for very slow progress. We stopped just before the sun dipped behind the mountains finding a rocky but flat patch of ground. We are camped on our own and it is ever so nice to stop.

Day one has exceeded our expectations. It has been a brilliant start to our CDT hike. One of the gear additions we did for this hike was add a Sea to Summit pillow to our sleeping arrangement. As I lie here very warm in my sleep bag, my head is so softly cradled by the pillow I can’t wait to stop typing this post as my fingers are quite frozen. As I bid good night with frozen fingers and warm throbbing feet, the wind is rustling the tent but the Big Agnes is standing firm. 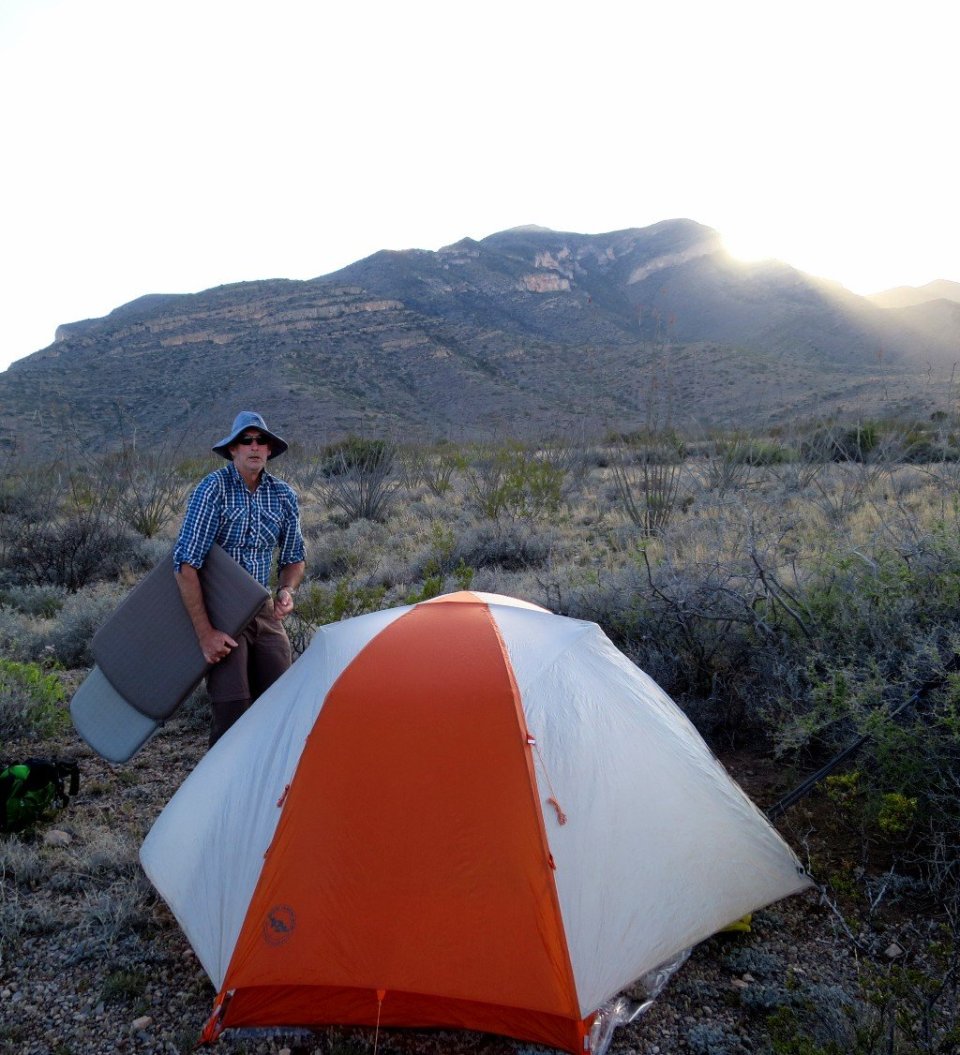