I stayed in the shelter at Gregory Brook campsite last night. Late yesterday, a couple with a young boy came in for an overnight stay. They were doing a short hike with one night camping and this was it. I wanted to start early this morning but was worried about waking them up. I apologised in advance last night. But there was no way I could disturb them with my early morning coffee brew so I packed as quietly as possible and was on my way at 5am.

It was lovely and quite hiking in the dark. The trail was wide open and easy. These early kilometres always just seem to glide by. I don’t know if I was just to tired to notice yesterday afternoon but as it got light this morning I noticed a distinct transition in the forest – I’ve entered the Karri Forest Region. The trees were much taller with slender, straight trunks. Gone were the grass trees replaced by an impenetrable shrub. These curious herbacious looking plants lined the early parts of the trail. They had a plum like fruit with a white seed like structure hanging off the fruit. The fruit must have a laxative effect on whatever animal eats it. The trail is splattered in in parts in their droppings containing the seed parts and dark remains.

Even though sunrise did not really happen this morning, there was prolific birdsong which more then made up for the grey sky. The birdsong on the way to Donnelly River village is something to be heard to be believed. It was like hiking in a giant aviary with these huge stately gumtrees enclosed. The grey sky produced rain on and off and a burst of blue sky which would quickly disappear.

Since I did not have a morning coffee I was keen to get the Donnely River Village, 20km away. The village is an old timber mill town. The mill closed over 40 years ago and the workers cottages are used for holiday rentals. Essentially the village is a General Store and holiday cottages.

I was pleased to make it to the store just before 10am. It’s school holiday time so there were lots of people staying. I loved sitting in the store having my amazingly delicious coffee and watching people come and go. The fire place was on and it was very cozy. I loved this store, it would have been easy to stay, curl up by the fire and read a book. 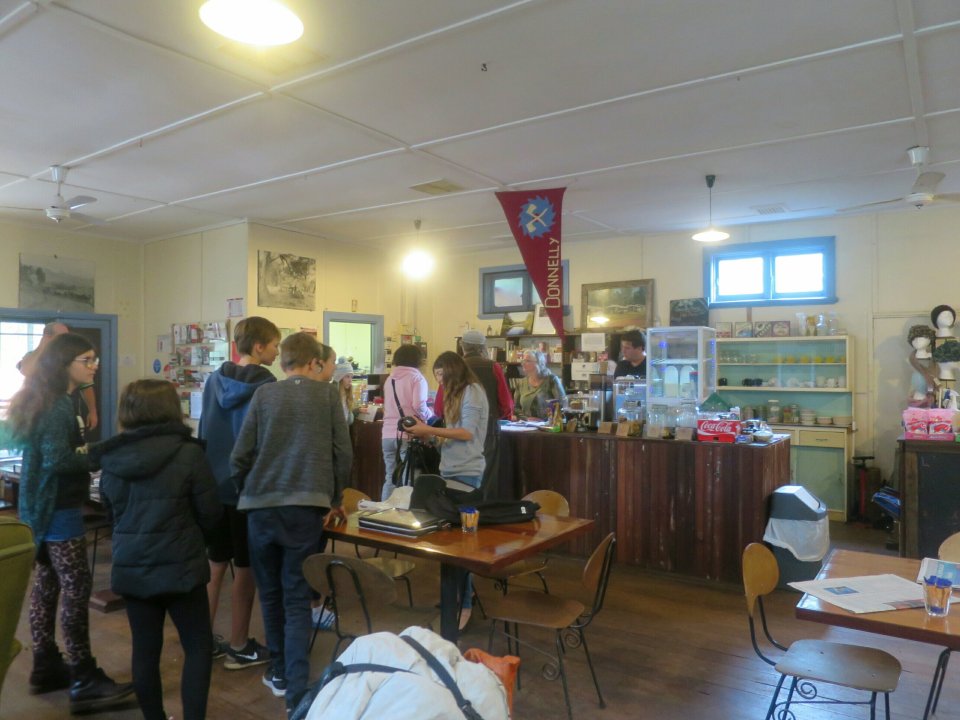 But I still had miles to make so half an hour after arriving, I was fed and caffeinated and leaving the warmth of the fireplace to go back into the wild outdoors Outside again the sky still looked threatening. The resident wallabies and emus seem to have the run of the village streets. They were so tame. 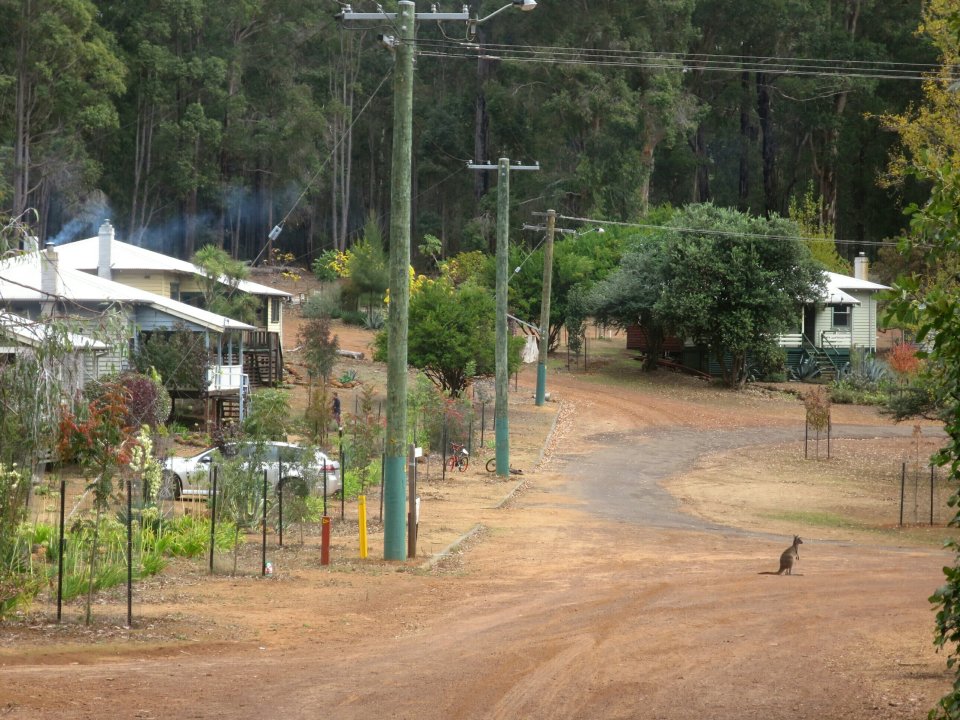 Heading back on track I met Leo, a northbound e2e hiker. I thought he was an experienced hiker from what he said. He advised me against hiking in the rain. He thought it was dangerous. I didn’t have time to ask why he thought that but took his advice and hiked on. I guess there is a risk of being hit by falling branches in a storm.

It is 16km from Donnely River to Tom Rd shelter, and it rained pretty much the whole way. The intensity of the rain varied, and even a glimmer of blue sky appeared, but it was mostly drizzle. This rain did not come with gusts of wind or lightening or any rainstorm fury. It was just water falling gently from the sky. Like standing under a shower of varying strengths of flow.

The birds were still out and singing, the trees were still majestic, so it was not so bad. 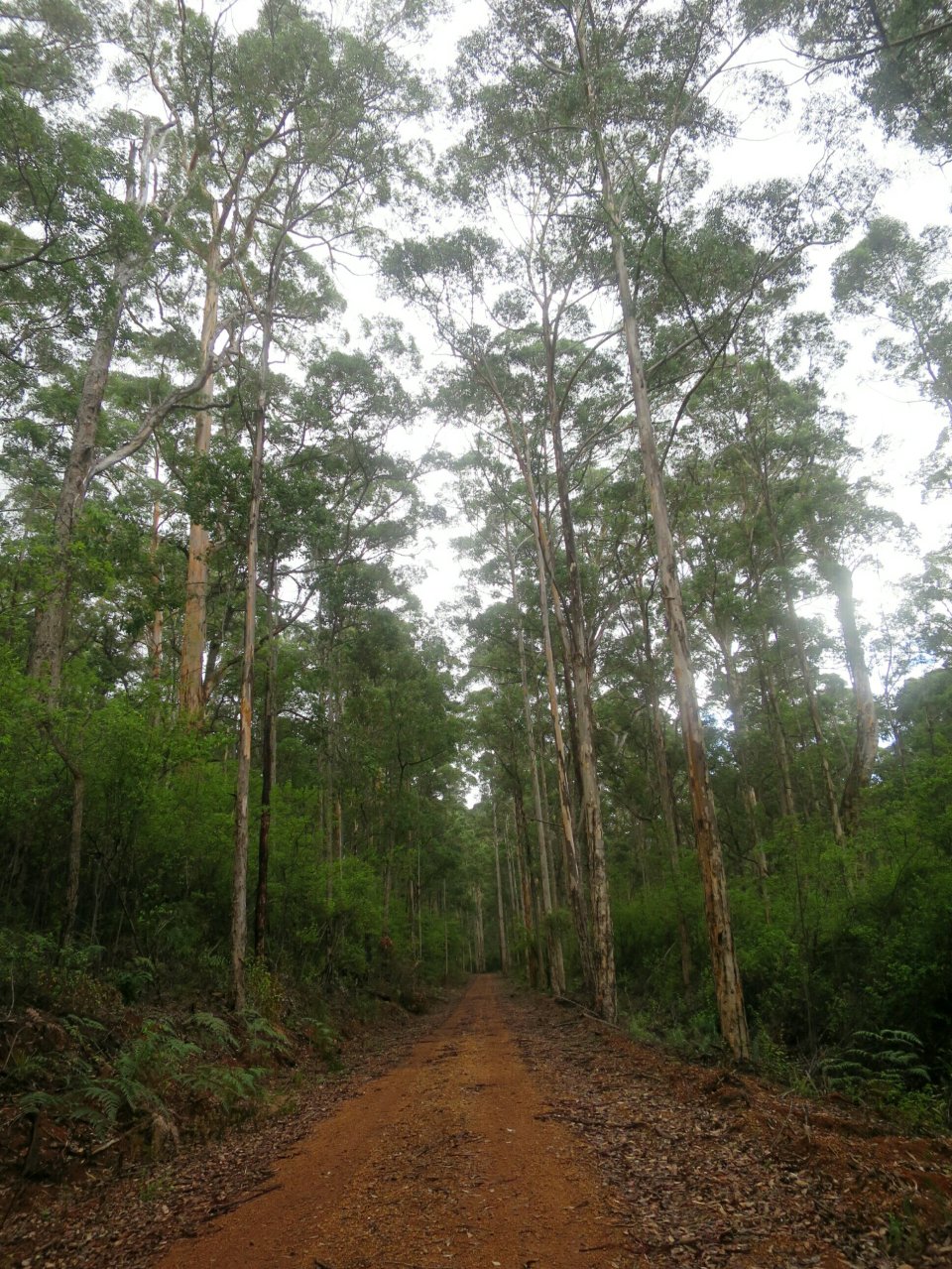 I made it to Tom Rd campsite at 2pm and I was done for the day. The campsite is nicely located by a river but there are a few mosquitoes around. I was so pleased to reach the shelter and get out of the rain. However despite the rain it was a beautiful section of trail to hike with the highlight being the warmth and friendliness of Donnelly River Village and of course the majestic trees. 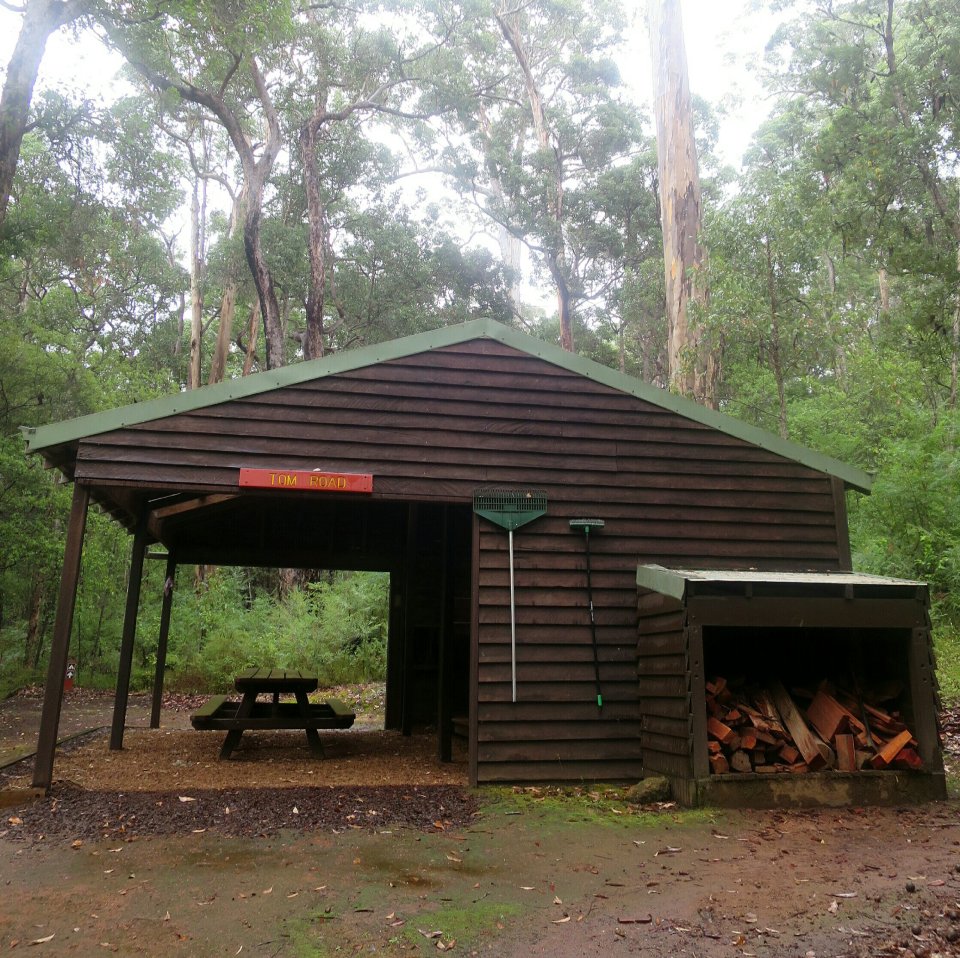 After having something to eat, I curled up in my sleeping bag and read a section of a book I found a few days ago. Cosy in my sleeping bag I was interrupted at around 5pm by a late arrival. It was Shane, one of the runners attempting to set a fastest known time for the track. He was alone as his running partner ended up in hospital with cellulitus. He was very relaxed and looked fresh for someone who’s been running 90km a day for the past 6 days.