I can’t say I liked staying at Beavis camp. It wasn’t just the noise of the frogs croaking all night or the strange noises, its location was a little unsettling. It’s right on the trail and the open side of the shelter faces the trail and a fire road. While I was sure the road had locked access, I still did not feel as relaxed as I’ve been at other locations. The strange noises I heard sounded like guitar strings being plucked and a scratching and knocking sound. This was an occasional burst and then it would stop. But in the dark of the night all sound is amplified, particularly when you’re already a little bit edgy. All that considered, I slept OK and was woken around 3.30am by the sound of fat raindrops falling on the tin roof. I was grateful to have the shelter, with all its quirks, I was under cover and did not have to pack up a wet tent.

The forest was silent as I moved away from camp at 5am. The rain had stopped and the only sound was falling drops of moisture from the leaves and my puffing as I climbed out of the valley in which Beavis camp is situated. A couple of fruit bats flew very low over my head. They gave me a fright as they would scoop low towards me before pulling away. Their wings making a swoosh sound as they pulled away.

It was almost light by the time I finished climbing out of the river valley, leaving Donnely River finally behind me. I was covered in sweat as it was very warm and I was wearing a rain jacket. My feet were grateful for another morning of soft trail. 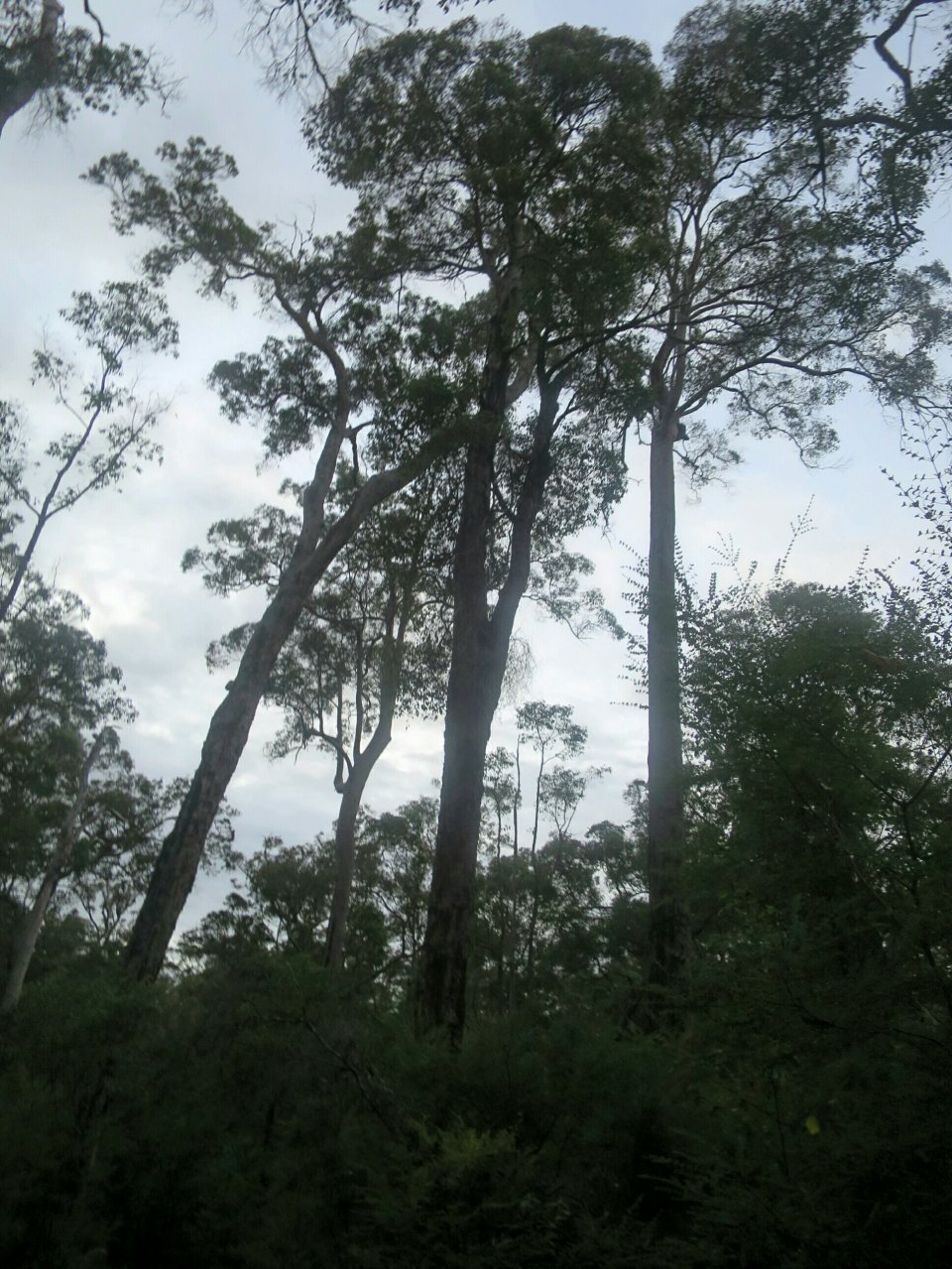 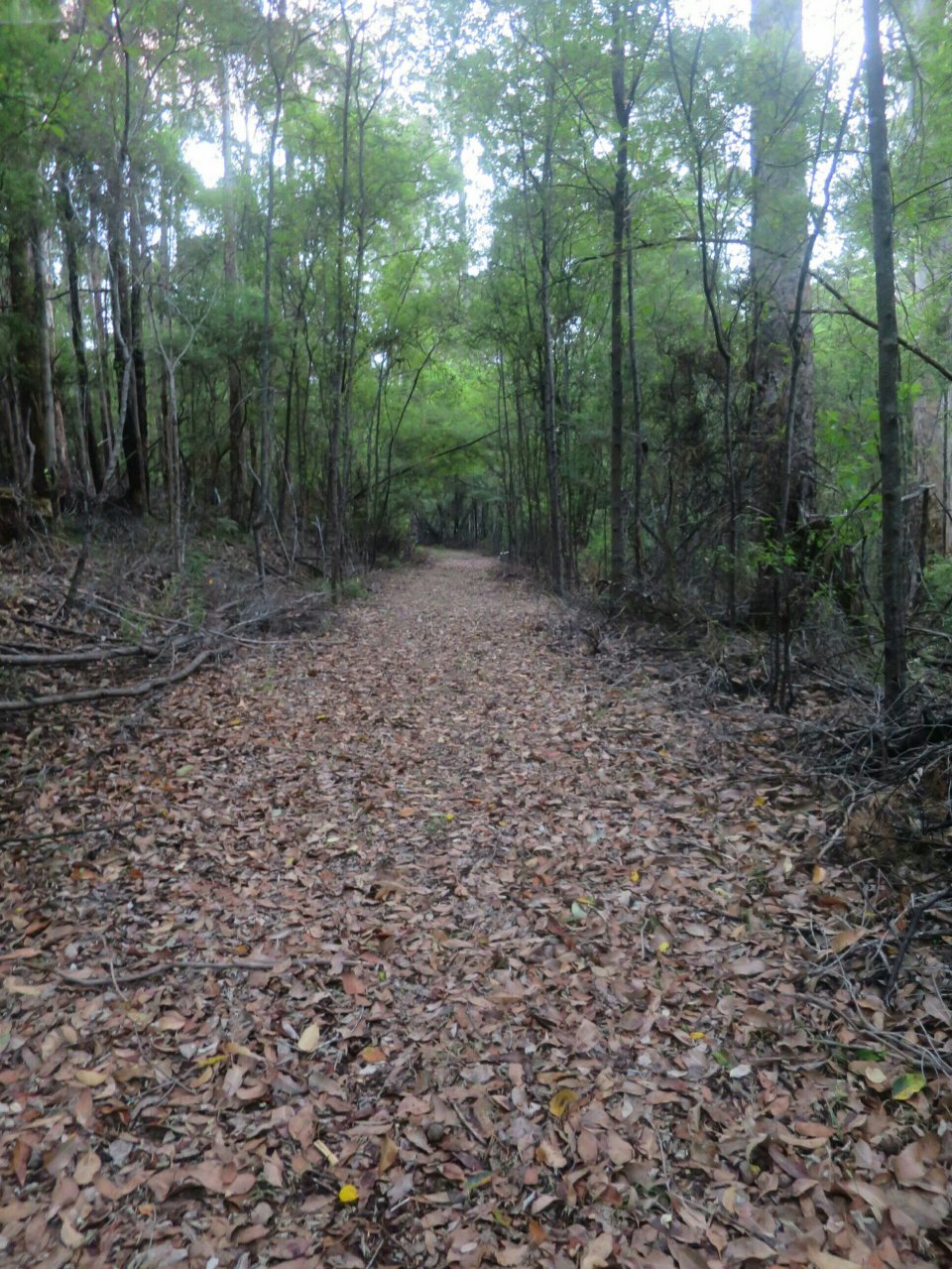 Rain had not returned and as it got light and there were traces of blue sky. I wondered if the weather prediction got it wrong. Everything around me had that eary glow created when filtered sun illumnates the surrounding. The blue sky did not last long before being swamped by grey clouds.

My morning got off to a good start when I saw another of those delicate orchids. Seems so surprising to find something so delicate and fragile in such a harsh environment and in a landscape dominated by such towering vegetation. 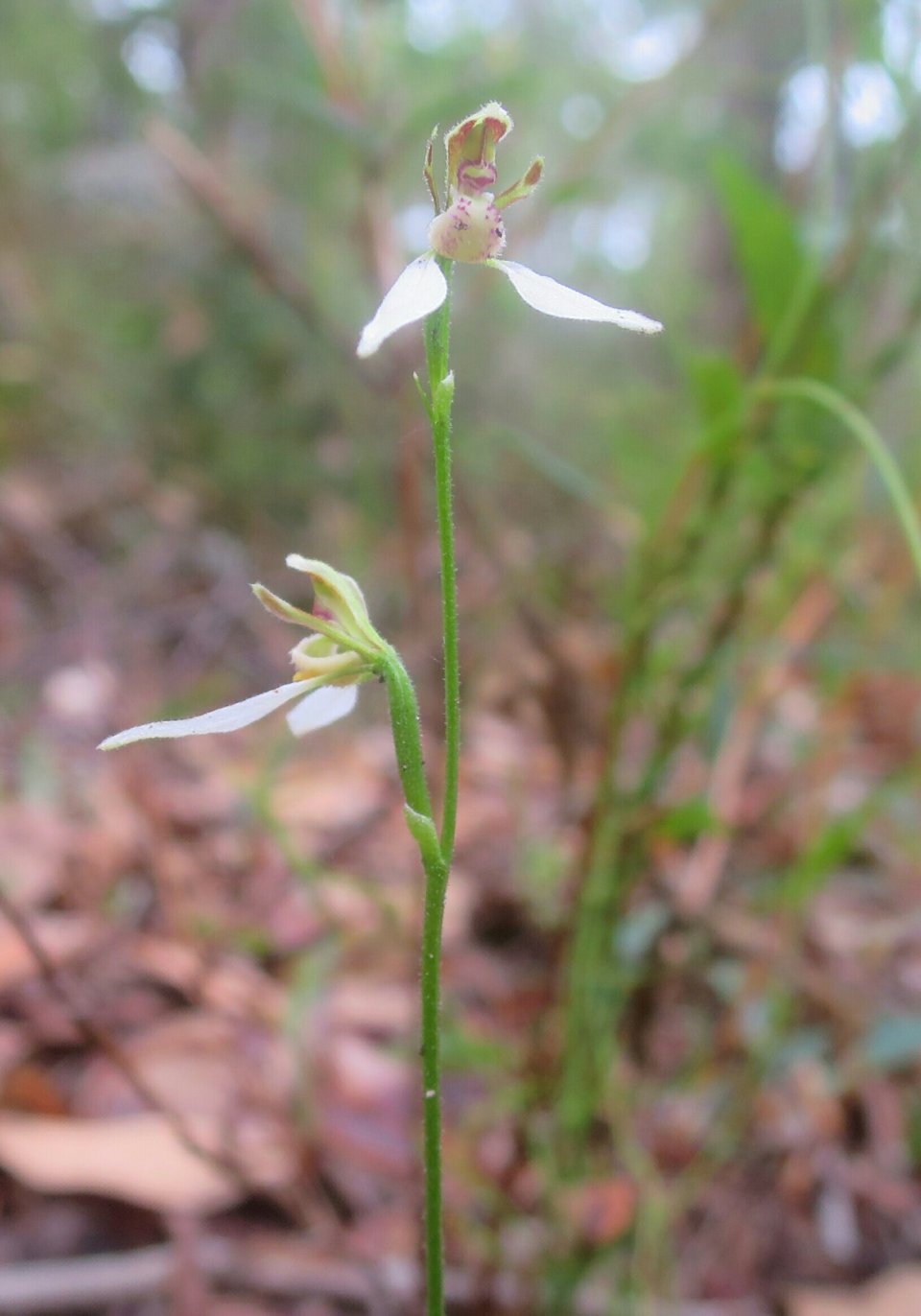 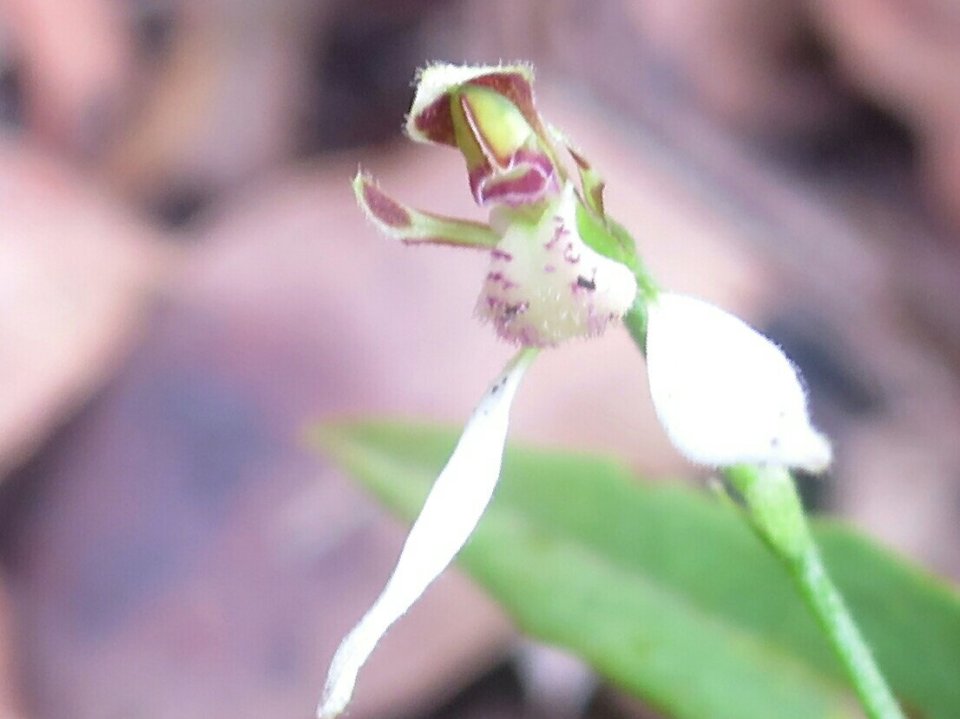 Before reaching Beedelup Campsite I passed a dam and Beedelup Falls. I could hear people canoeing on the lake but could not get a view through the vegetation. The falls were deserted. There wasn’t really much to the falls. I guess it needs a lot more water in the river to create more of a spectacle. 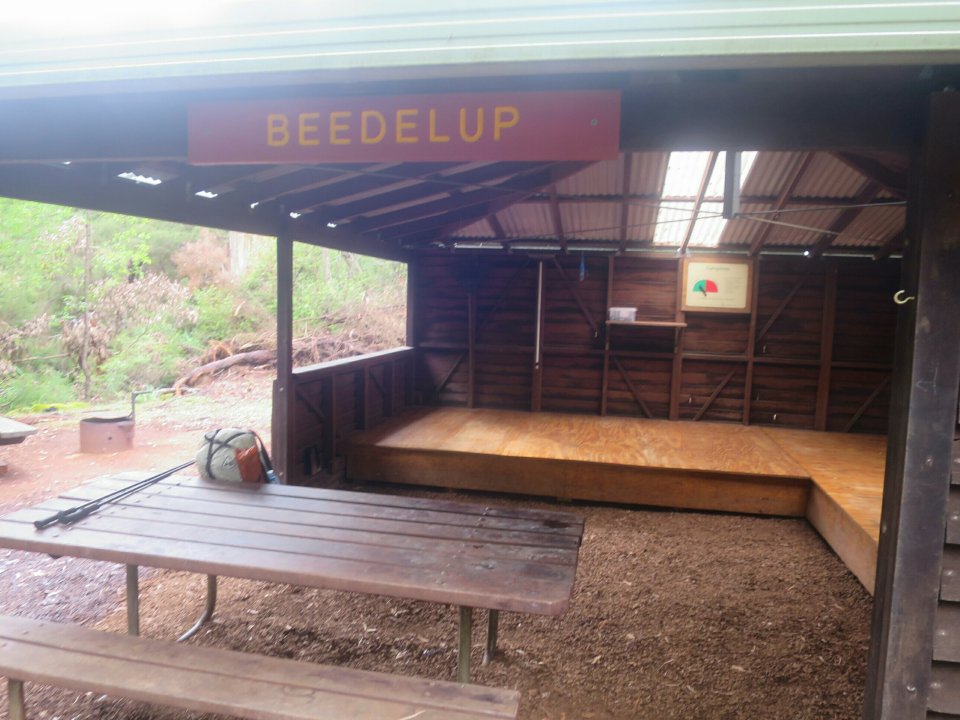 I stopped at Beedelup camp to rest and dry my feet. But within minutes my feet were being attacked by hungry mosquitos. Quickly I got my shoes back on and left. The trail climbed out away from the falls and the camp. It was steep and I stopped to take a breath. Looking back I saw blue sky and sunshine.

Unexpected blue sky and sunshine, tall trees swaying in the breeze and soft trail to hike on. I couldn’t believe my luck, it was happy days again. The tall trunks of the trees glowed in the sunshine.

Passing through private cleared land further along the track, I was struck by the contrast in their quality compared to the paddocks I passed a few days ago near BlackwoodsRiver. These were rich, lush and green. In the distance to the west I could see dark clouds. But the wind was moving the clouds further away from the direction of the trail. 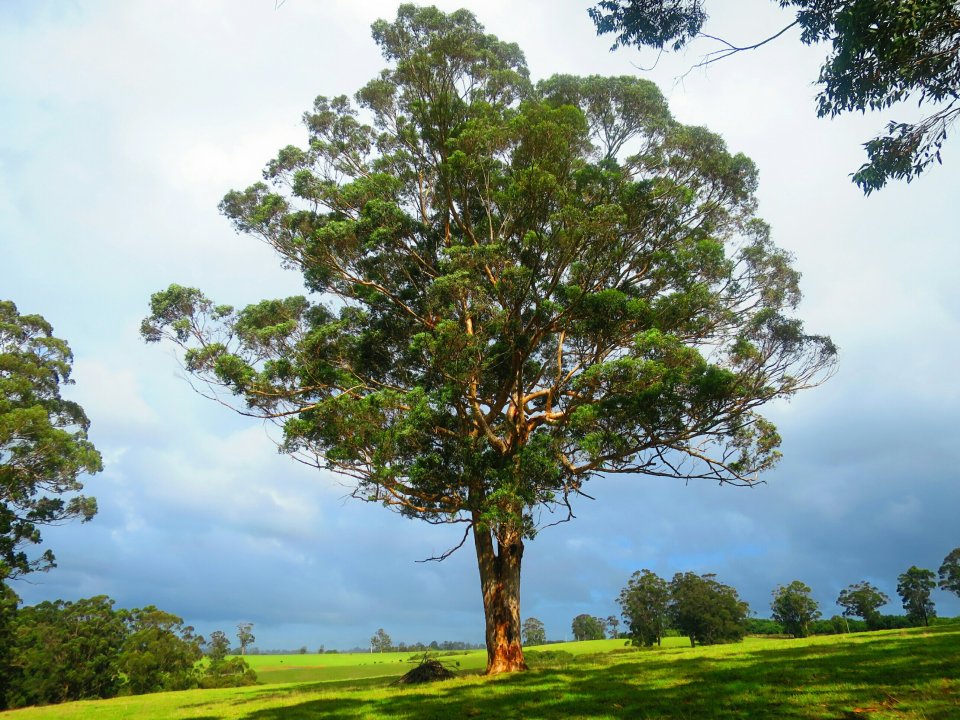 The trail from here passed through more stunning forest. It looked like it had been cleared recently by bulldozer which detracted from the natural state. However I was thankful that the trail was wide and cleared as I saw another tiger snake in this section. It was huge – about a metre and a half long and very thick. I was happy it was moving away from me. For the rest of the time in this area I stayed in the middle of the trail, just in case. 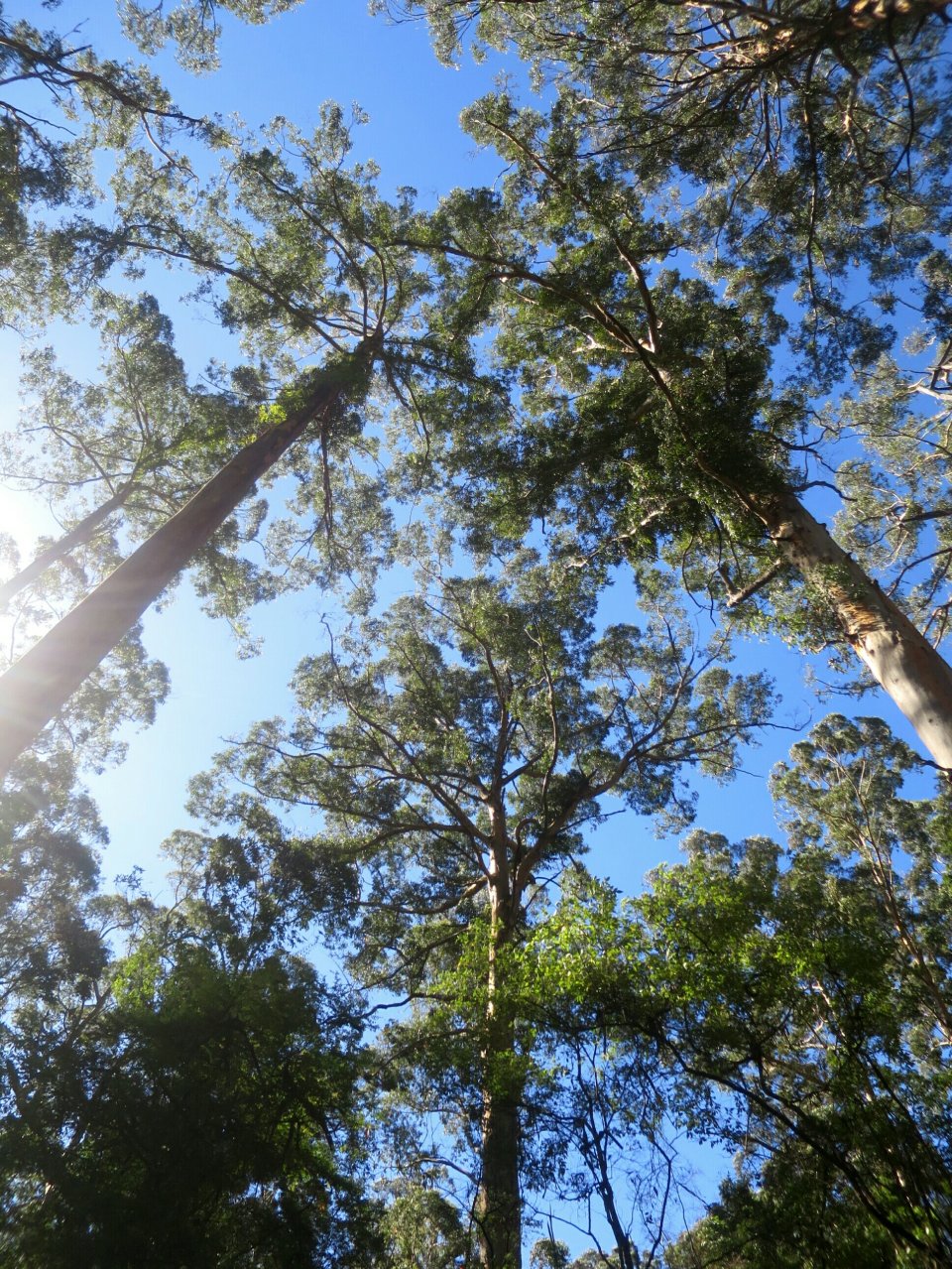 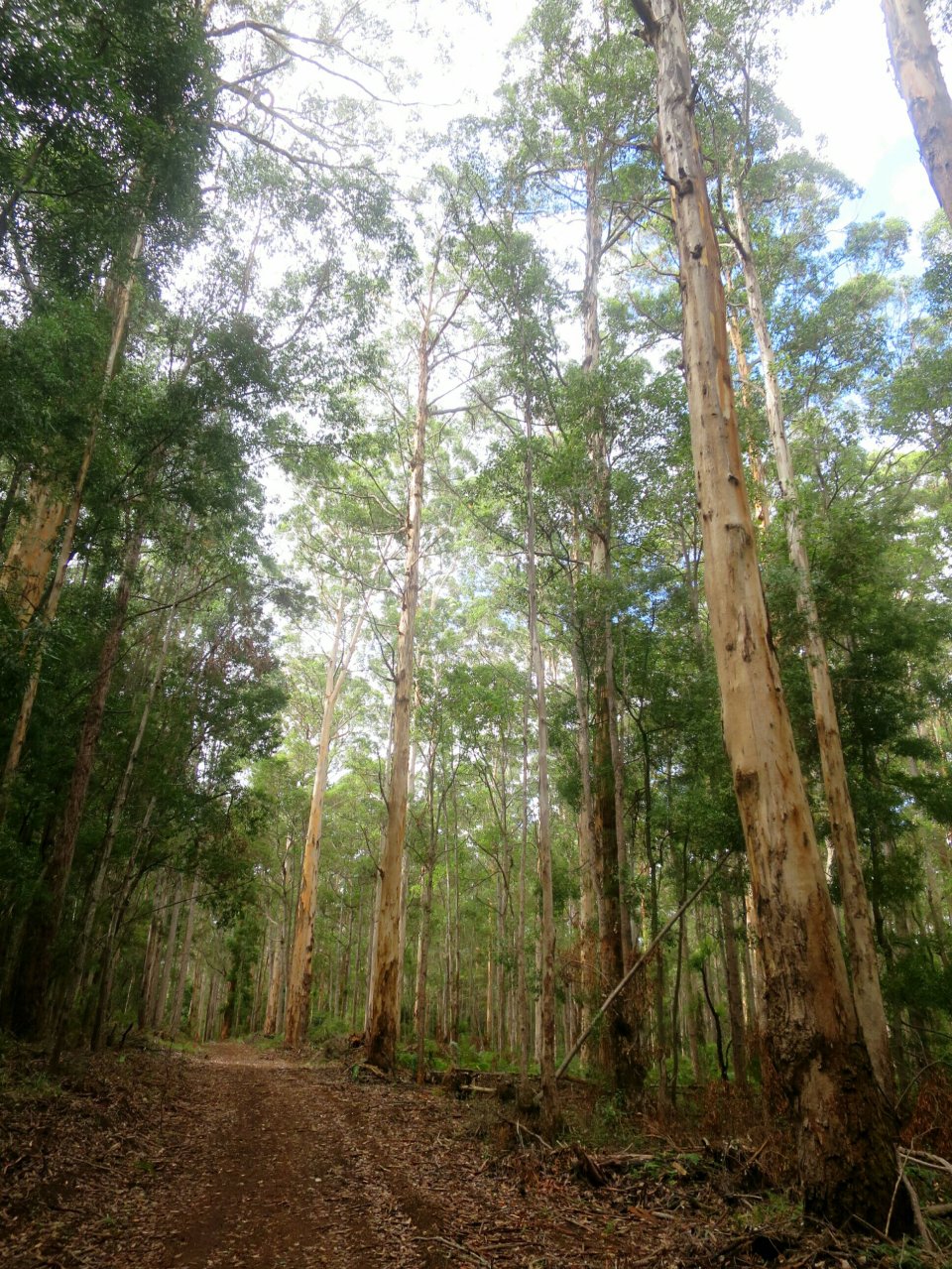 Crossing Sterling Road I felt that I was almost at Pemberton. The road leads into town only minutes away (by car). But the trails winds for another 12km passing through and Arboretum and Big Brooks Dam. It was interesting to see the Arboretum and again walk through a pine scented forest and the softness of pine needles which covered the ground. 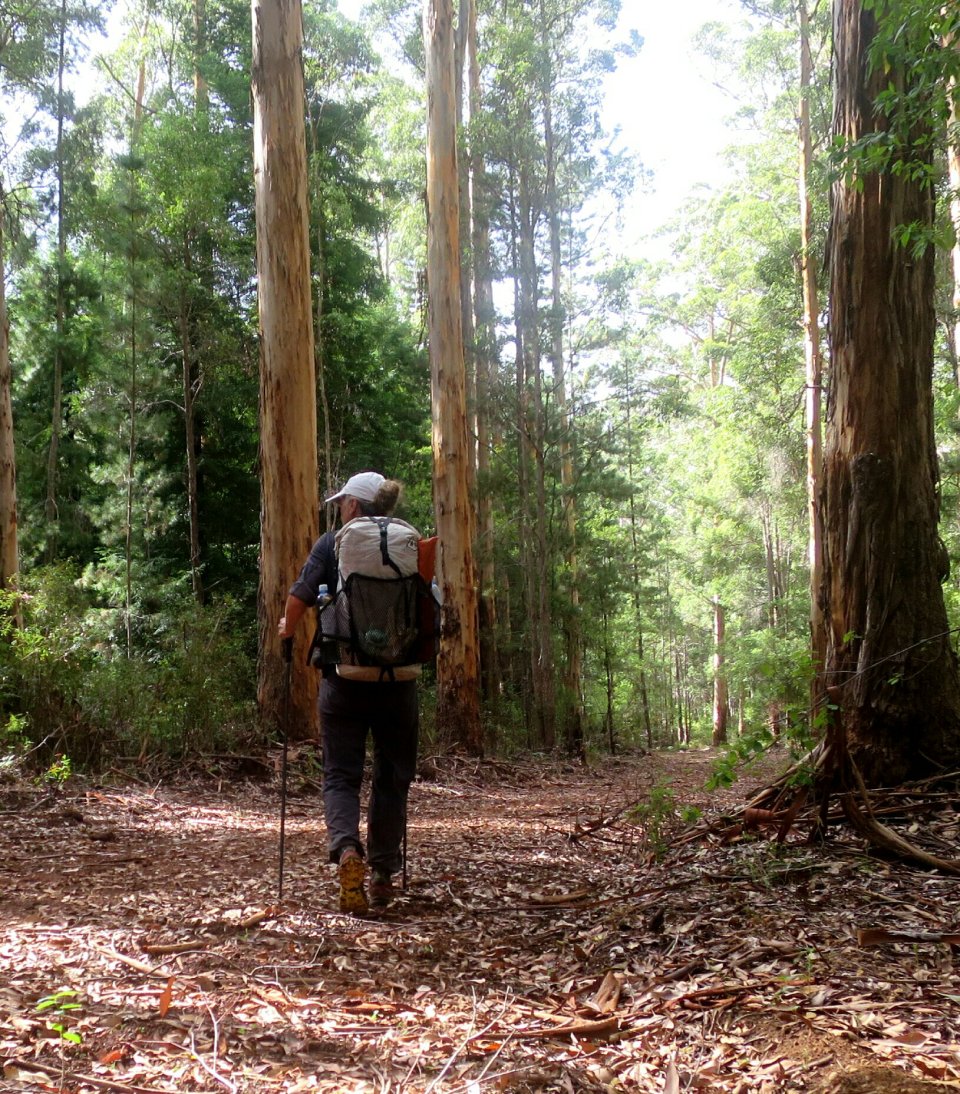 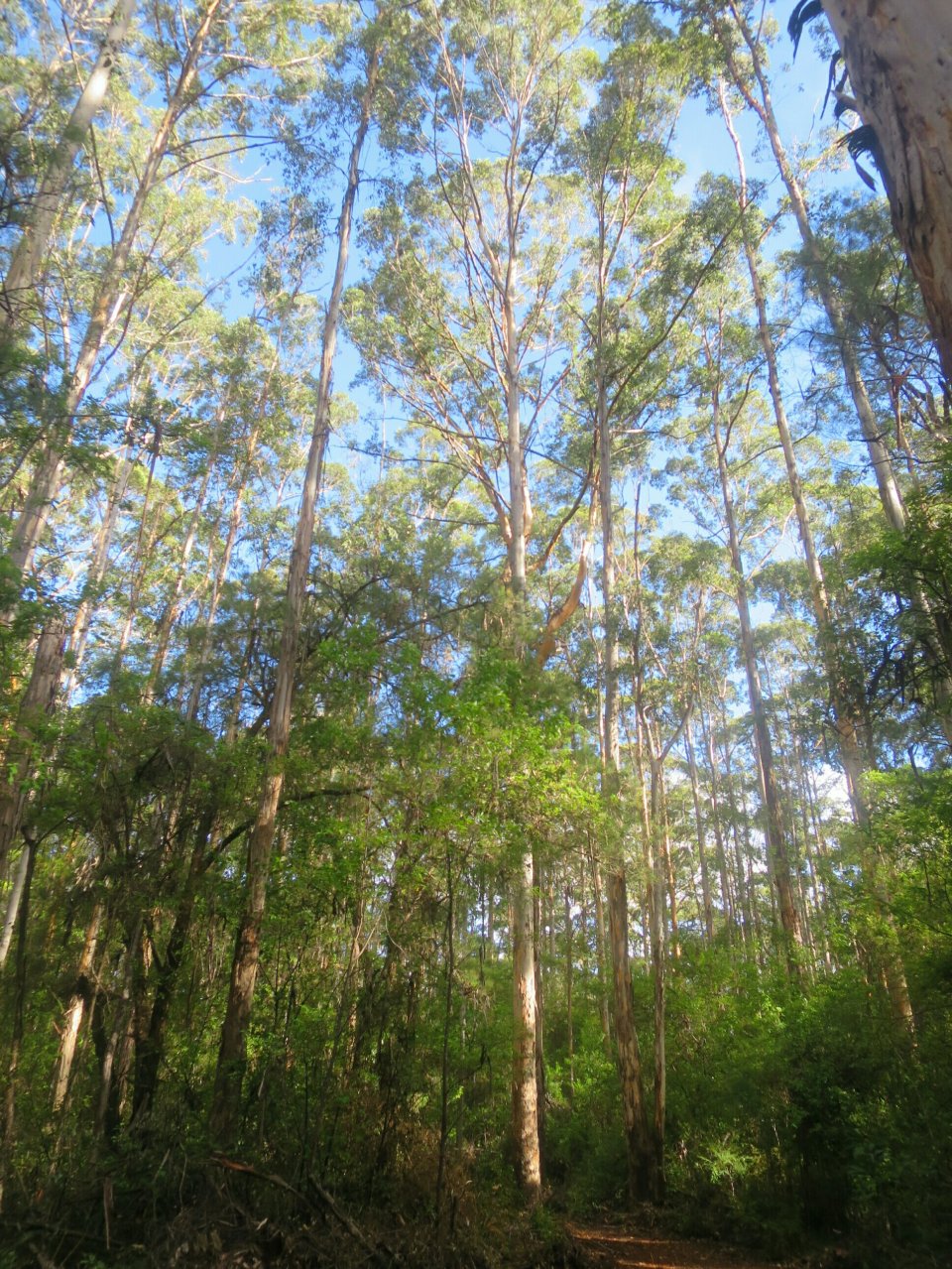 From the Arboretum the trail follows Big Brook Dam giving filtered views until towards the end. It was great to see people out enjoying the nice weather and taking a walk around the dam.

Less then 3km from Pemberton the sky suddently turned black and rain came down in buckets. It turned just like that and 20 minutes later it was all over. The sun was back out and apart from the puddles in the street there was no evidence of the downpour. My legs and feet were soaked as I had no time to put on my rain pants.

It was just after 4pm when I made into town, the visitors centre was closed and other places were also closing. Pemberton is surprisingly small, one main street and not much else. I got groceries at the IGA (which didn’t close till 6pm) and walked a bit further to get a room at the Best Western. It felt like total luxury to get out of my wet clothes and step into a warm shower. And I did not have to walk anywhere more today. Thunderstorms and hail are forecast for tomorrow, mainly in the morning. I’ll stay at the hotel till midday and then walk a short day to the next camp. This next section of trail from Pemberton to the town of Northcliff is only 53km with three camps along the way.

7 thoughts on “INTO PEMBERTON”