A DAY OF TWO HALVES 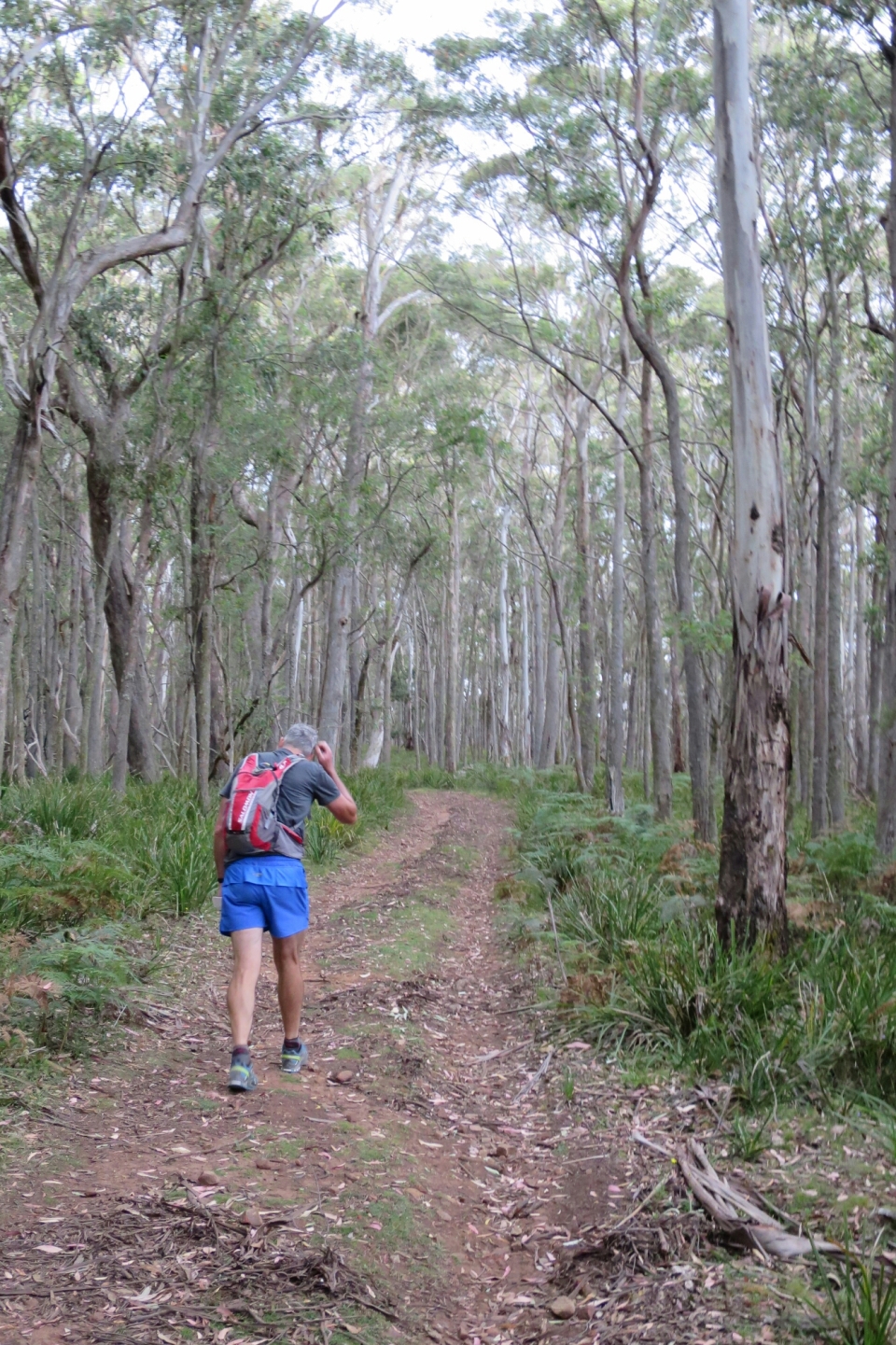 Wednesday December 16, 2015
Six Foot Track Day 3
We woke rested and eager to get going before the flies found us. The weather was cooler when we woke and it promised to be an overcast morning for our big climb out of Alum Creek and up the Pluviometer, a rise of about 500m over 4 km.
We were surprised by how much easier the walking was when the temperature was cooler. We made the climb in just a bit over and hour and it felt so much easier compared to yesterday afternoons effort up the Minimini Saddle. By the time we started on the Black Range the sun had come out and with it the flies. The Black Range is a 9km stretch of gradual uphill undulations.  When we had run through here in the past, it tended to have a hypnotic effect where time seems to stand still and you start to feel like it will never end. It has broken many a runners hopes of a good race. We found that hiking it was pretty much the same.  You just have to put you head down and not think too far ahead. You just got to get it done and it does eventually end. It is always exhilarating to hit the pine forest and realise the the Range is behind you.  We made it back to the Black Range campground where we started on Monday in just a bit over 3hrs for 13 kms. Here we swapped our hiking backs for day packs and headed off for a 20km return trip to Jenolan Caves.  The vegetation on this stretch was surprising lush with deep fern covered gullies and moss covered bark on the trees. Not long into the walk the clouds started to gather, the flies disappeared. Before too long the light drizzle gave way to a steady shower and by the time we reached Caves House, a heavy downpour. We waited for the rain to ease before setting off on the retun leg back to Black Range campground.  On our return trip the valley was covered in mist, which made it look so beautiful and so serene. The rain seemed to clear the air and it was so quite. It felt like we were the only ones out on the trail. Fog covered everything which added to the beauty and the silence. The buzz of flies around our heads was a distant memory by now. The return trip seem to take no time at all. We were greeted on our retun by sunshine and a mob of kangaroos feasting in a field of daisies. Such a beautiful sight. A grand way to end a 90km, three day hike in our backyard. 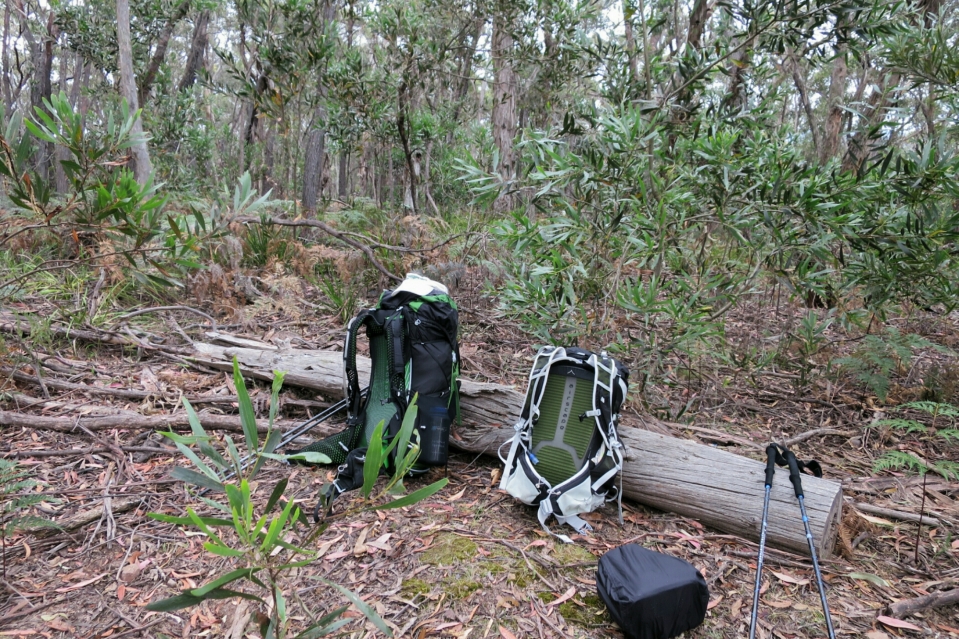 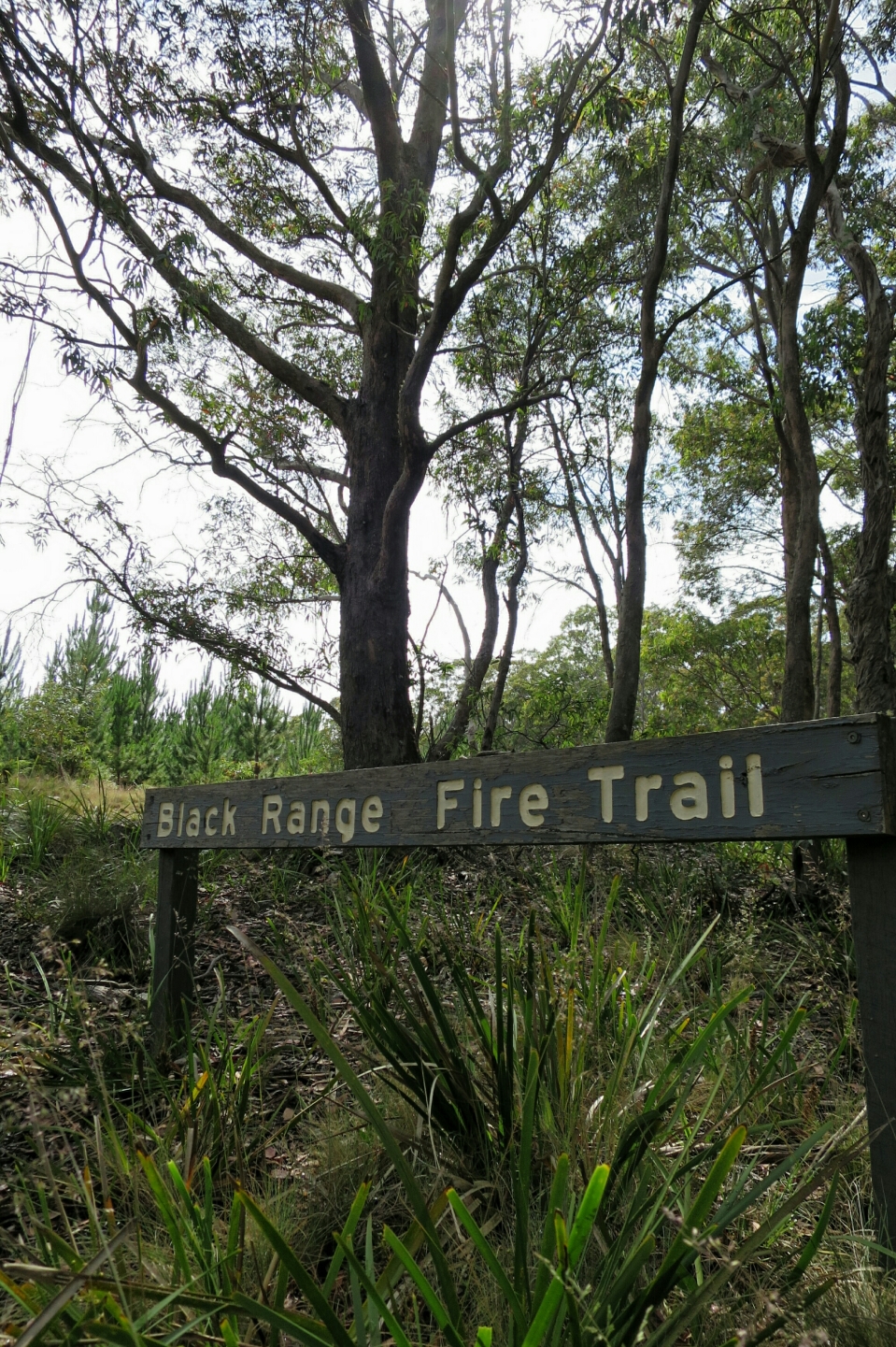 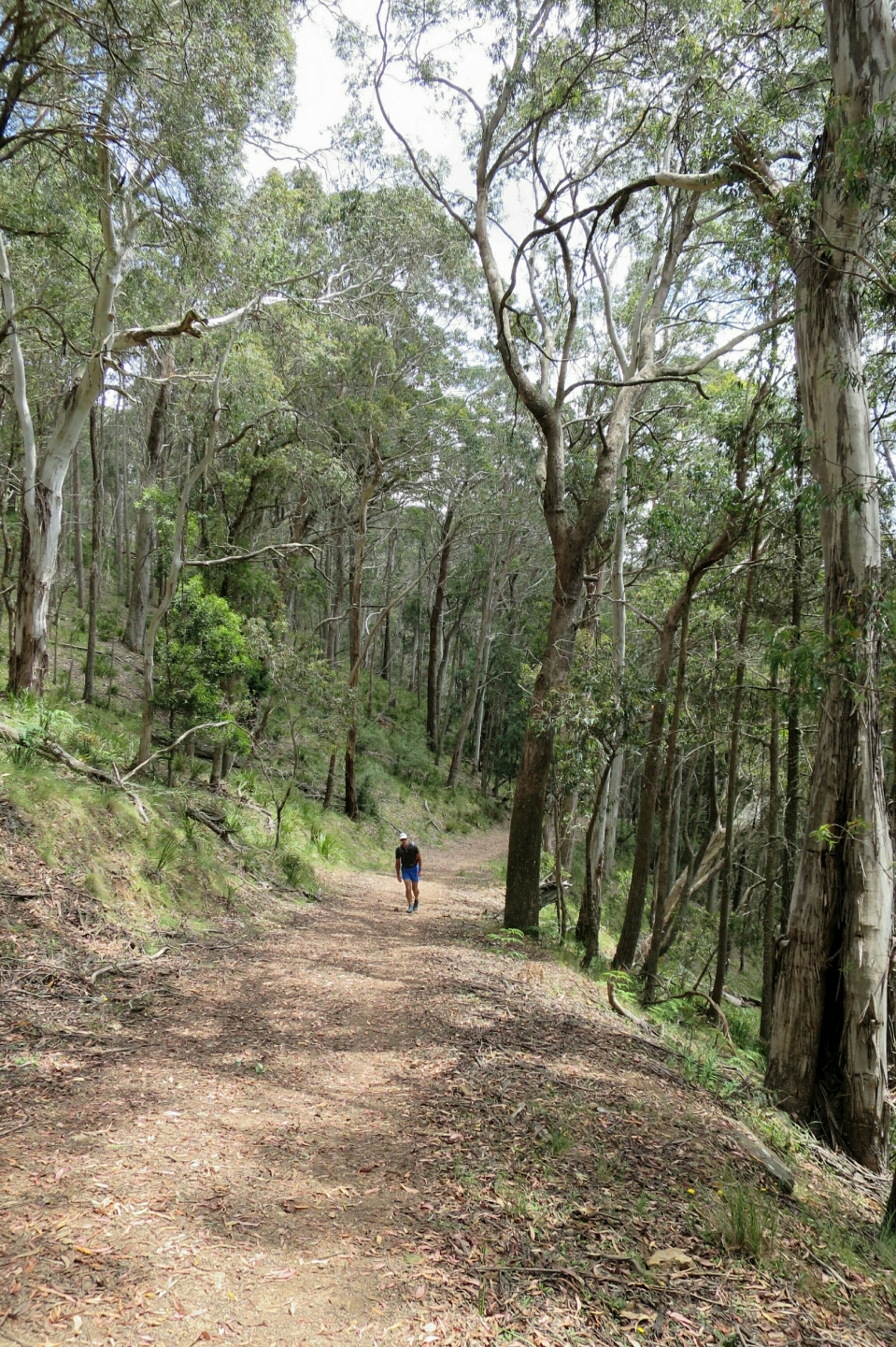 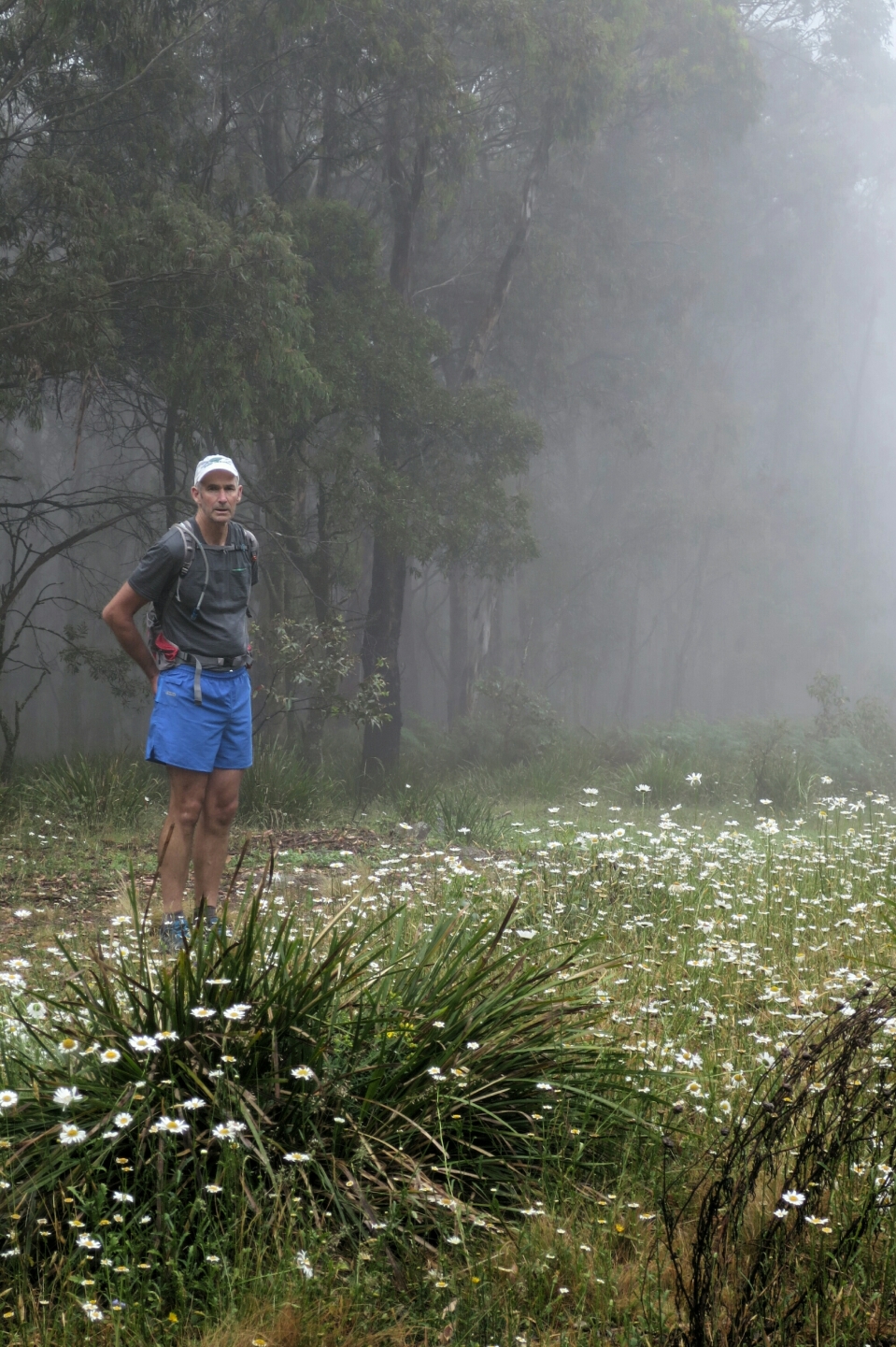 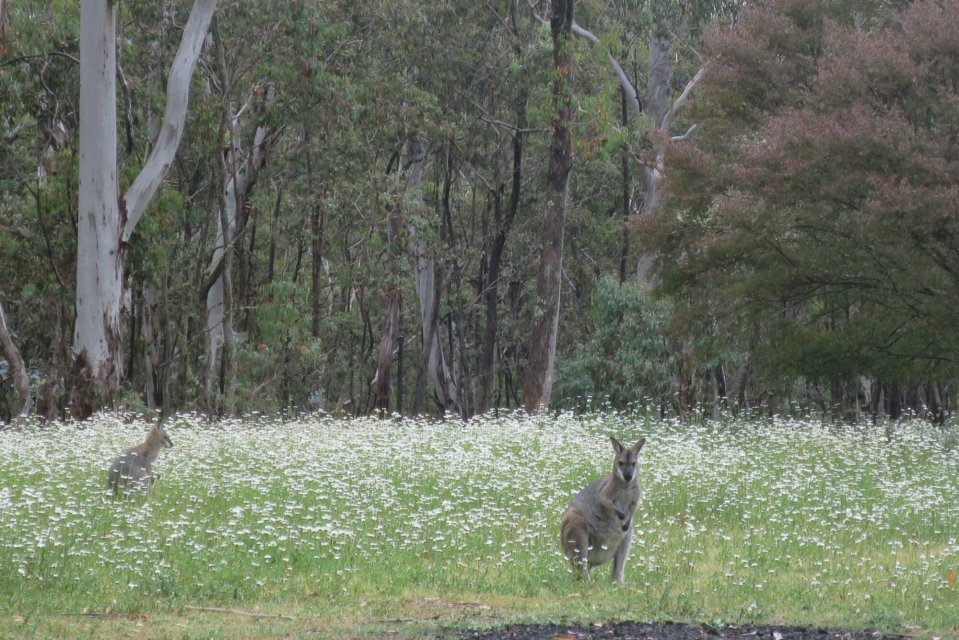