SOUTHBOUND INTO THE ANACONDA PINTLER WILDERNESS 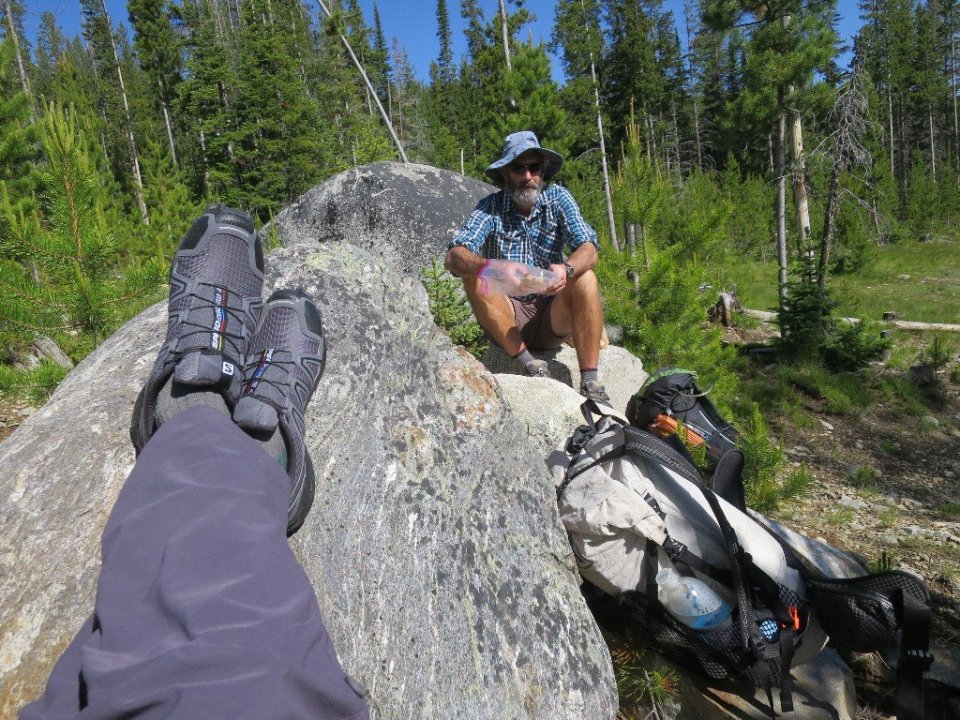 There are seagulls in this town. I heard their squacking as they flew over this morning and it was confusing. We are hundreds of miles from the sea. I wondered if it was the huge wastewater ponds that they inhabit at the copper mine over the mountain in Butte.

We stayed at the Trade Wind Motel in Anaconda. It was very clean and comfortable and the owners were super nice. We had breakfast at the Motel and were waiting for the post office to open before we started the walk out of town. It took us a while to click that today is 4th July – Independence Day holiday and the Post Office will not be open.

Now we felt really silly as we had plenty of time yesterday if only we did the grocery shopping earlier. Anyhow local trail angel Robin came to our rescue. She just happened to be grocery shopping across the road from the motel and agreed to come by and pick up our parcels which she will post for us tomorrow. And she also offered us a ride out of town to avoid a long road walk at the start. We packed hurriedly and pretty soon were heading out of town and were back on trail. How amazing is that – Robin is active in the local community and has been a great advocate for getting Anaconda listed as a CDT Gateway town. Just before she dropped us off a wolf ran across the road in front of us. It happened so quickly, a flash of grey and it was gone. How surprising and so close to town. 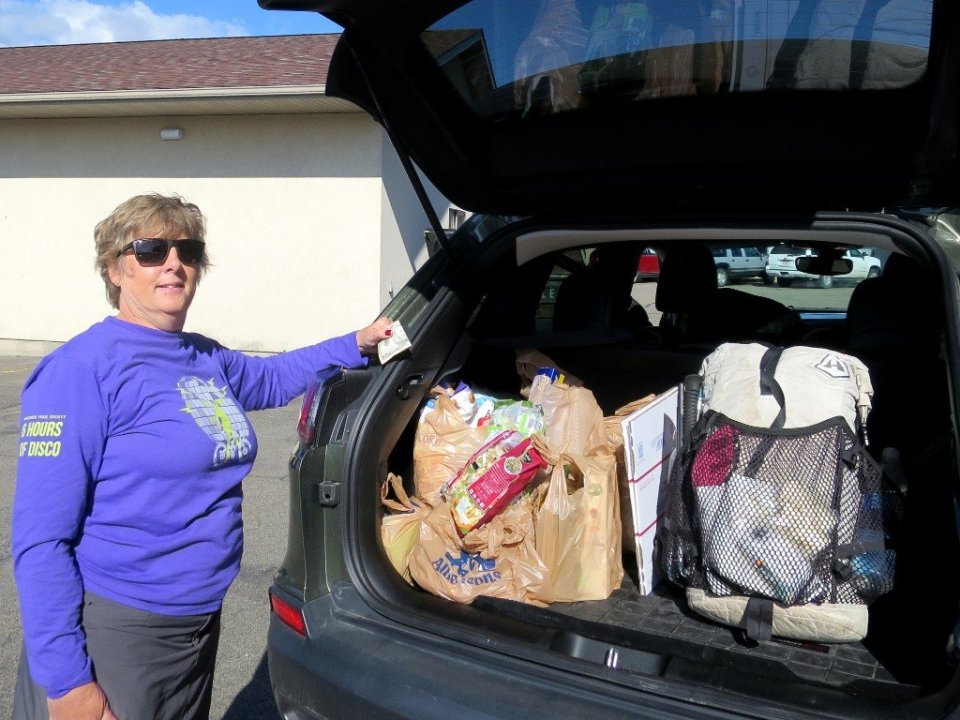 The trail out of town ascended very quickly rising almost 1000 feet to Twin Lakes. The ground was wet and boggy in parts with spring blooms about to burst into flower. It looks like the snow just receded in these parts.

From the lake the trail went up another 1000 feet to go over Twin Lakes Pass. The trail was so steep in parts I felt like I could have hiked on all fours to get traction. It was very quite and peaceful. Great views back from the pass, with bare granite mountain tops almost at eye level. 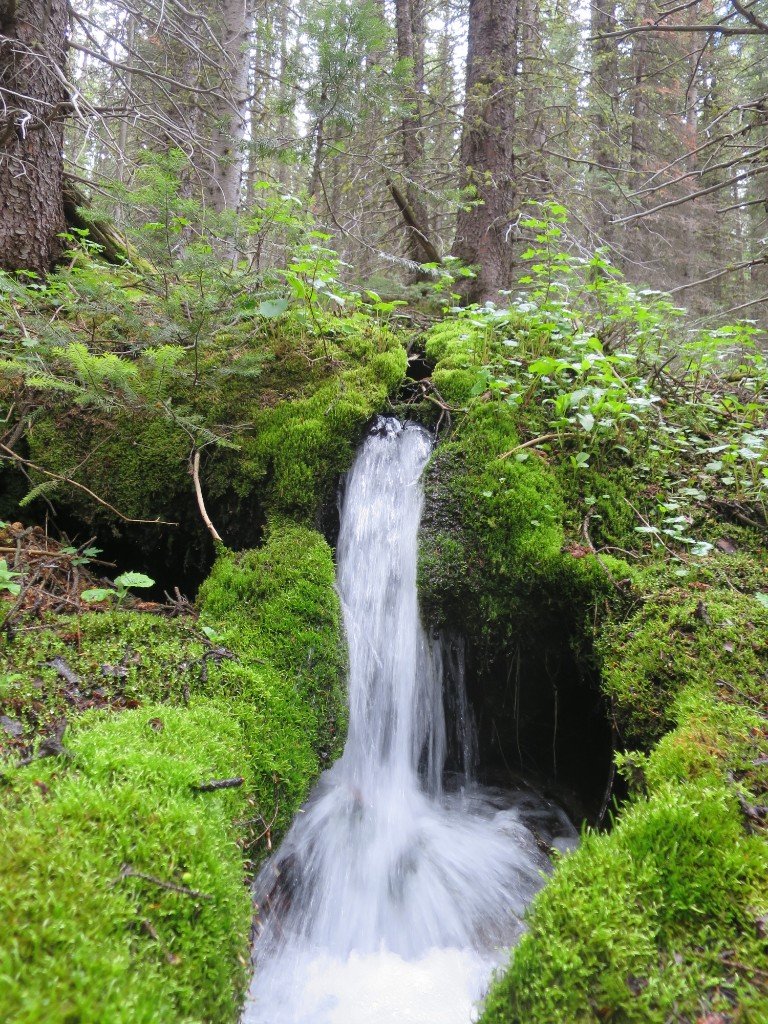 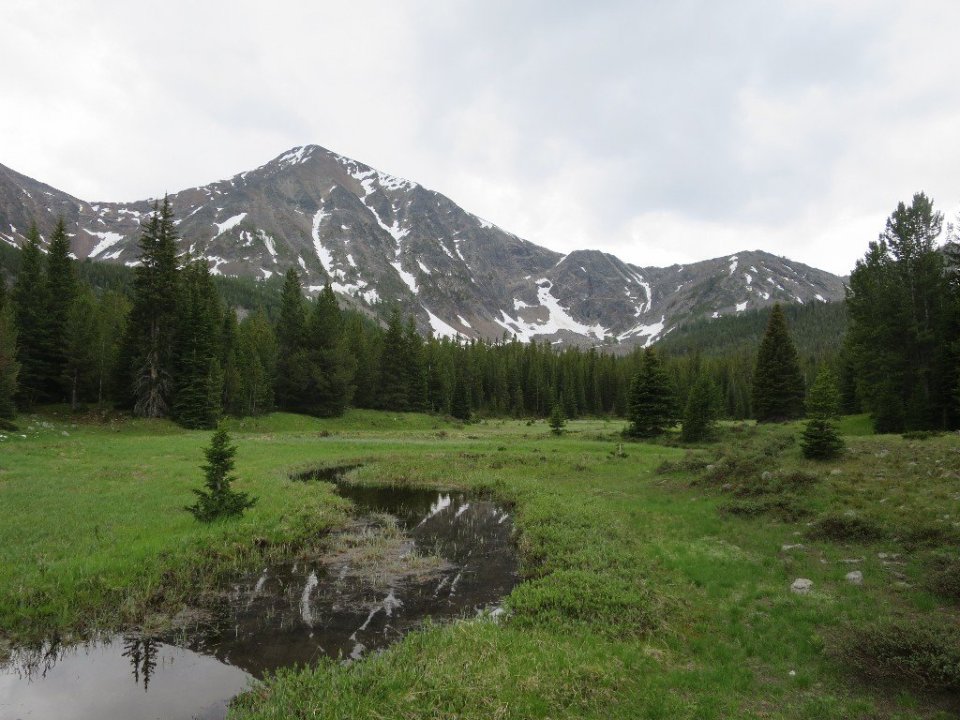 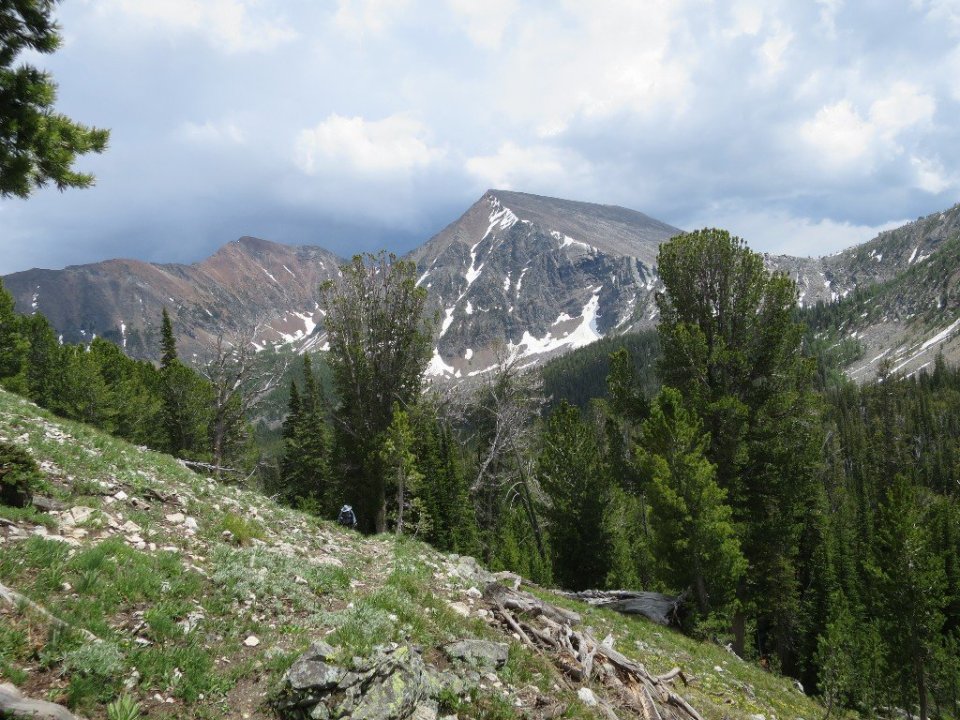 From the top of the pass we walked towards the huge Storm Lake. As there was little to no wind today the lake looked glassy and still. The snow covered mountain at the back of the lake was perfectly mirrored on the lake surface. 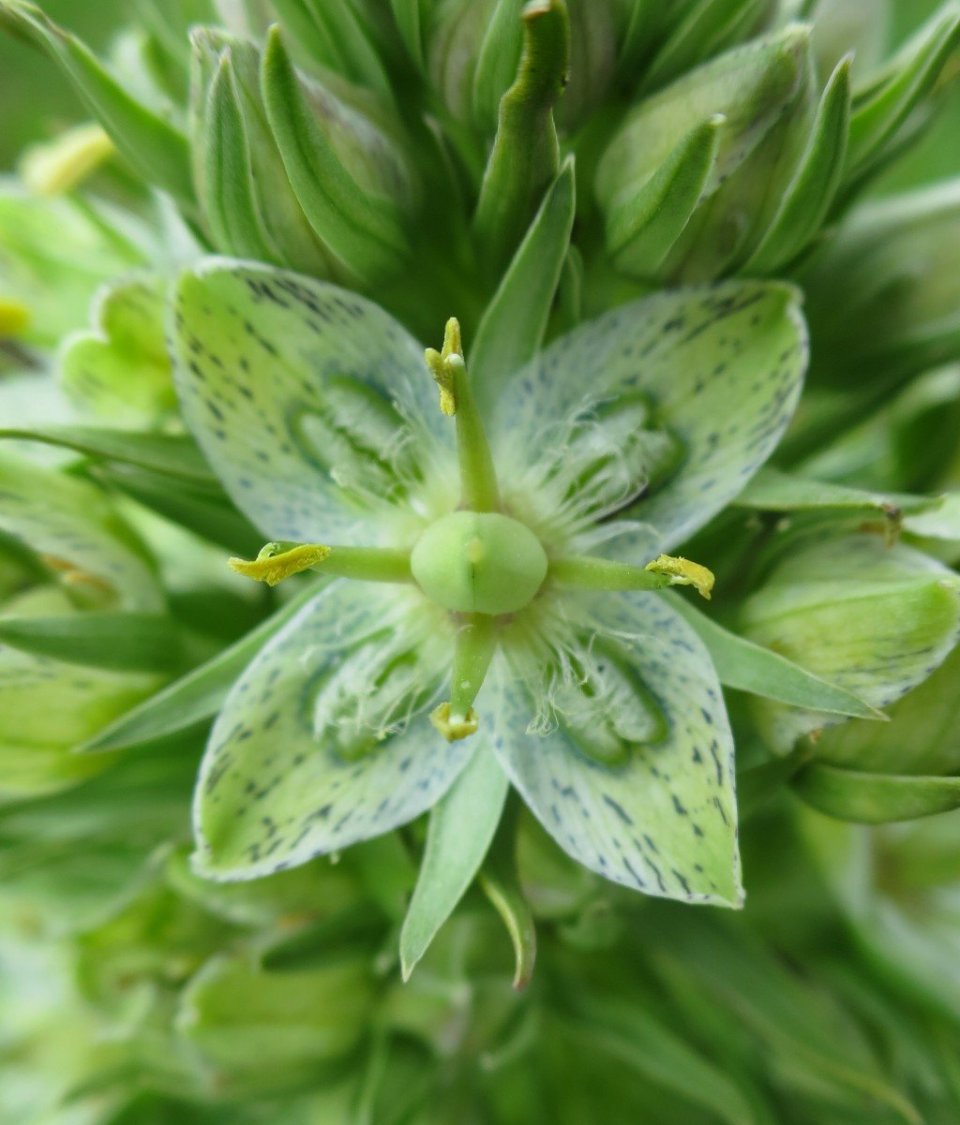 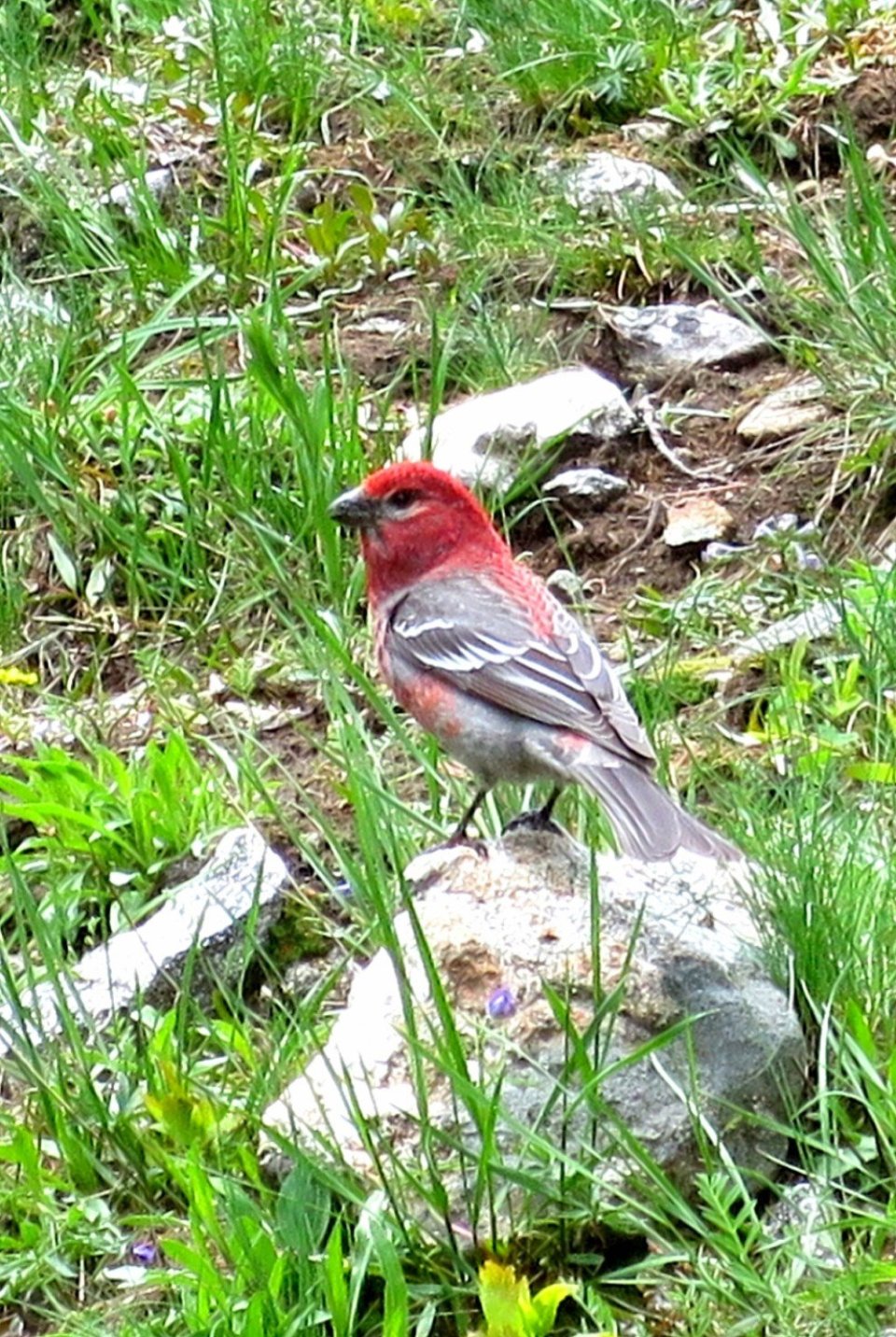 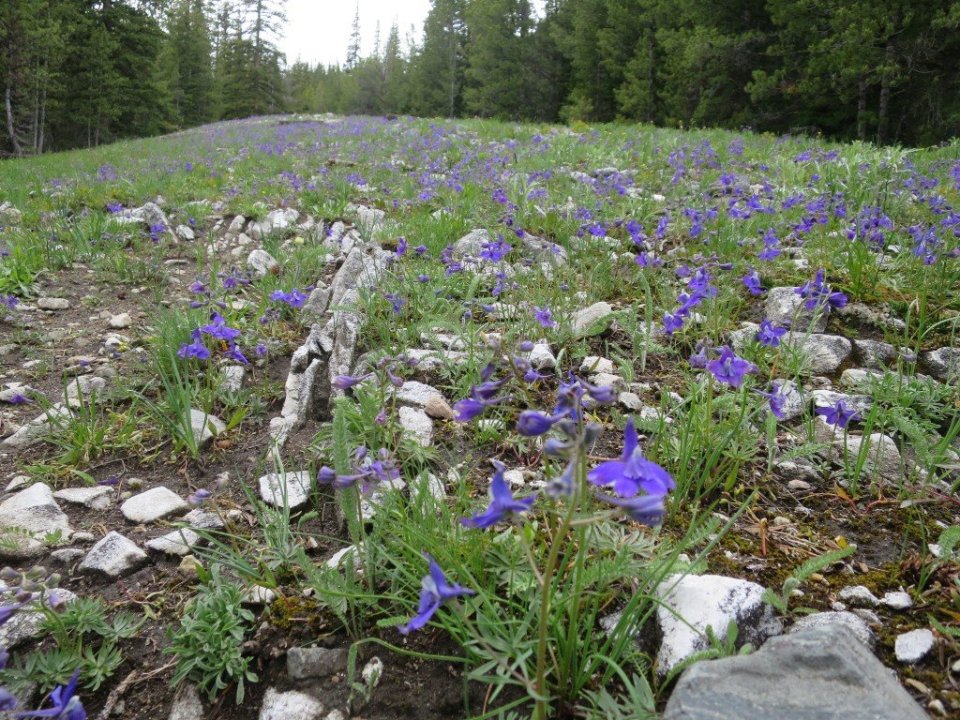 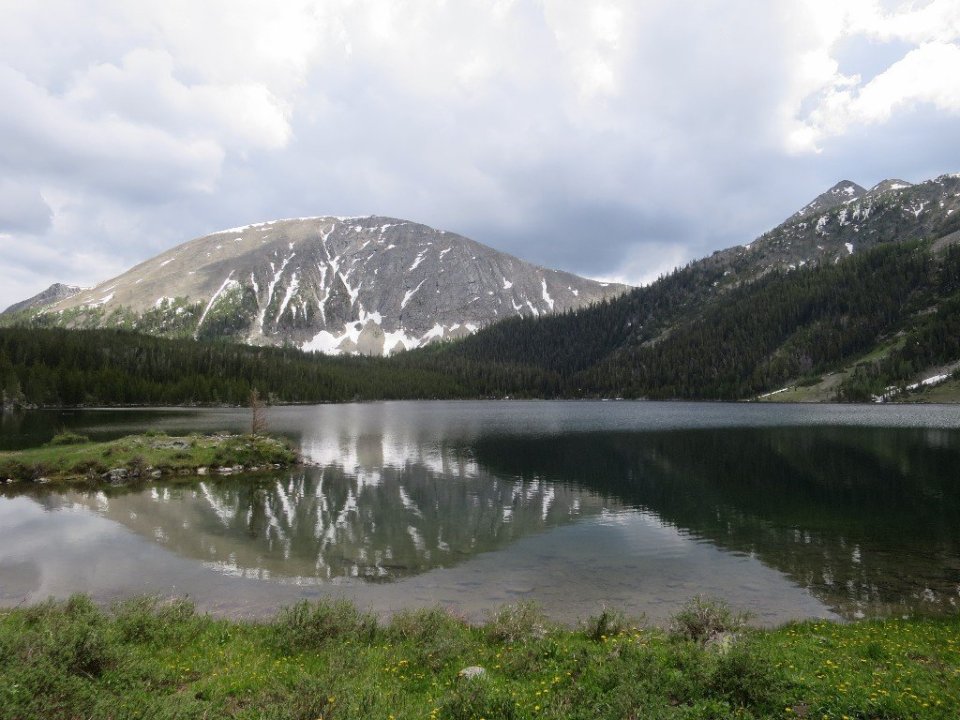 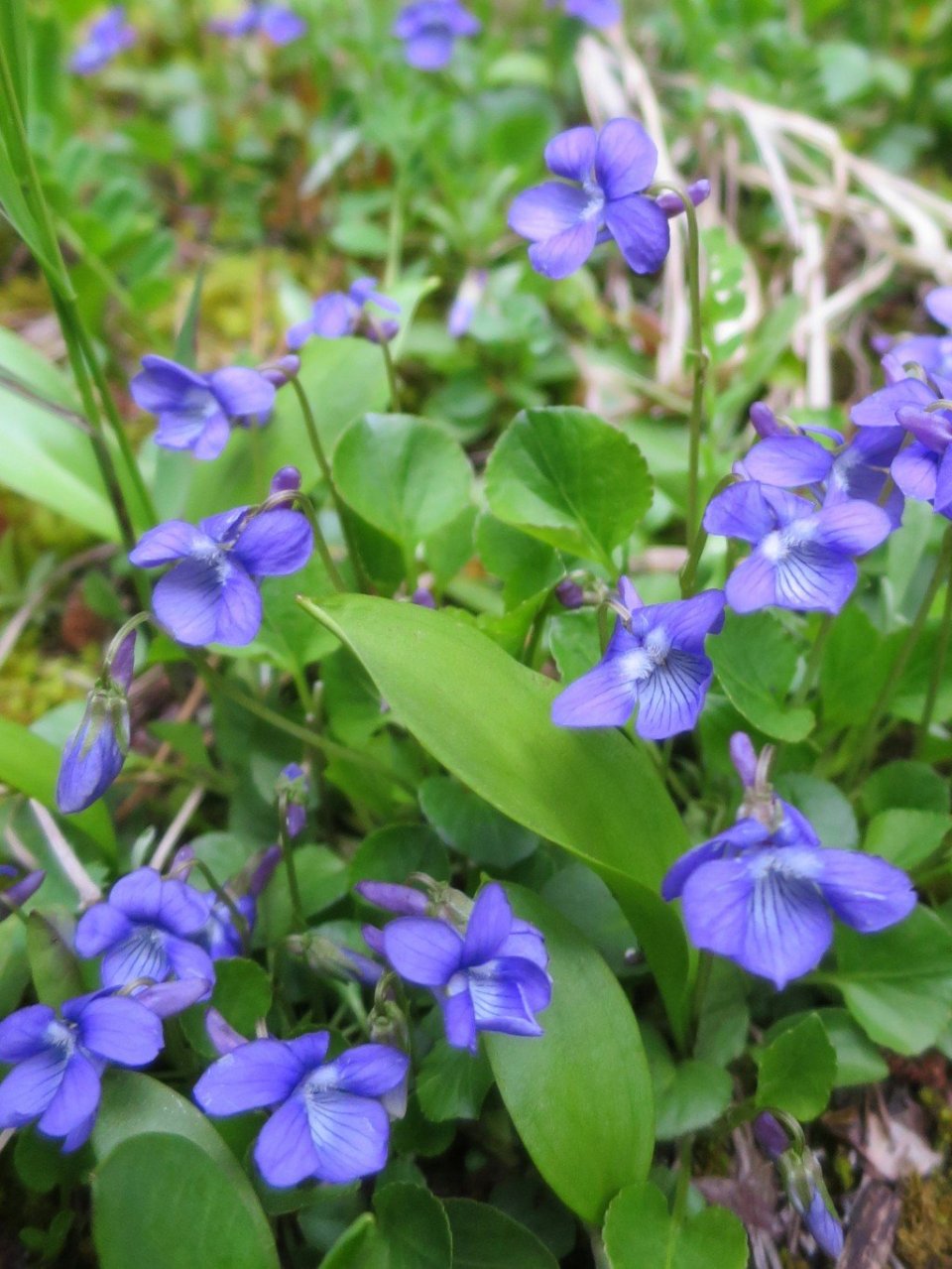 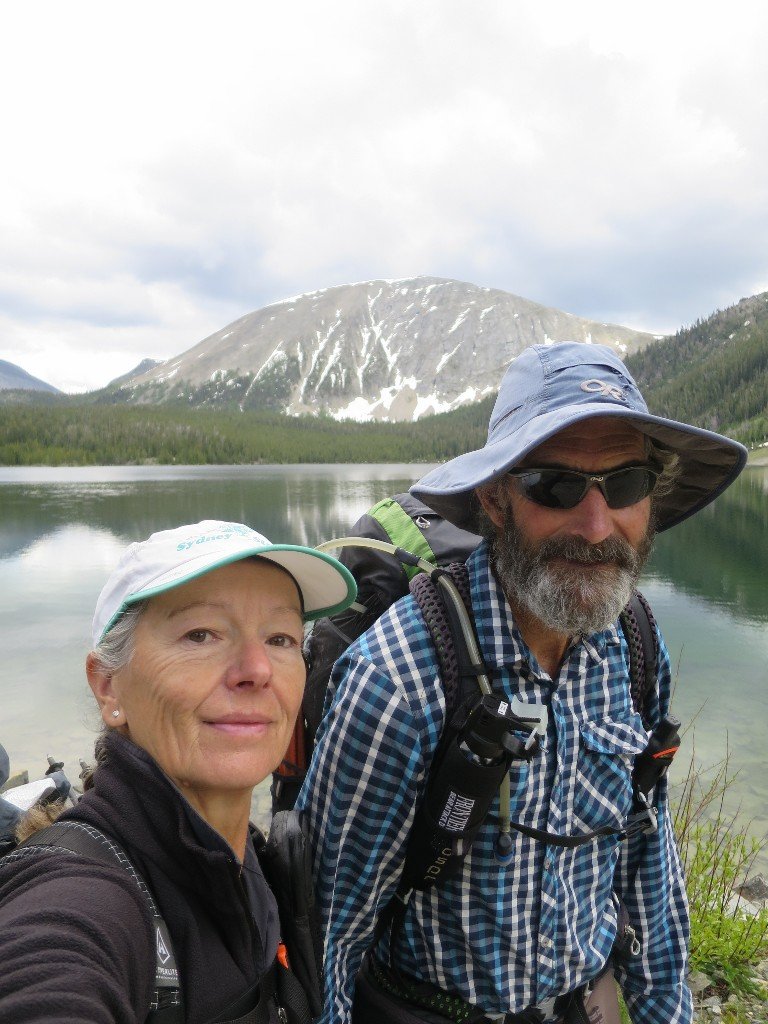 We were pretty happy that the predicted thunderstorm in the afternoon had not arrived. A few short showers but nothing significant.

We had one more pass to go over before we rejoined the CDT, Storm Pass at 9,150 feet.

Half way up the climb to the pass we started to encounter snow patches. We passed a group going down from the pass. They warned us about a steep snow chute which the trail crosses before Goat Flats. We were more surprised to see that one member of the group had a hand gun holstered on his hip. It was for bears and bogans, they told us. 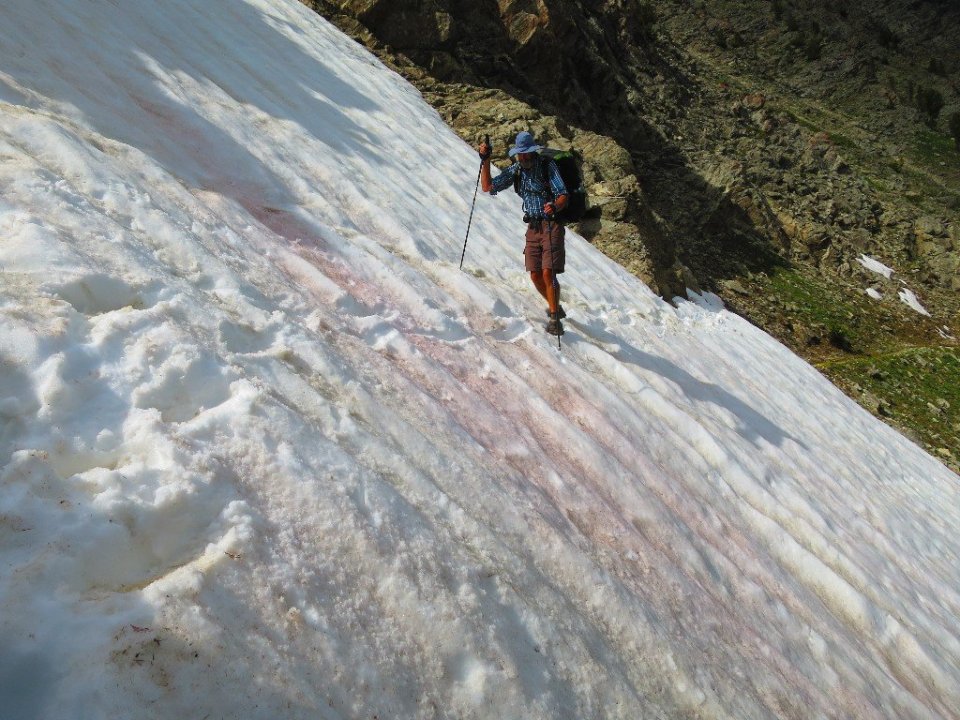 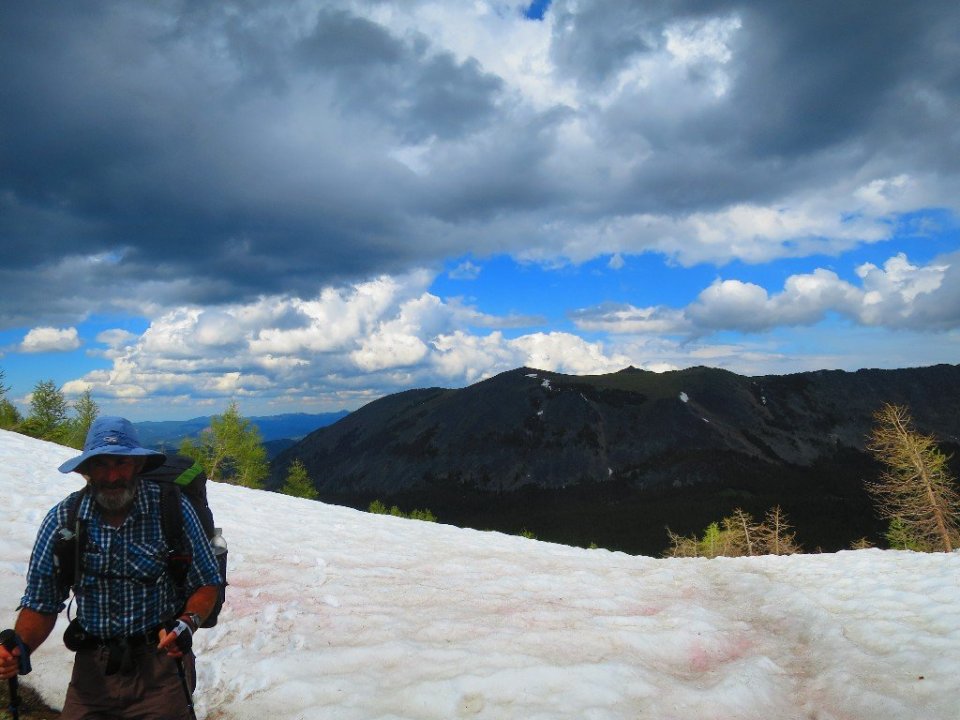 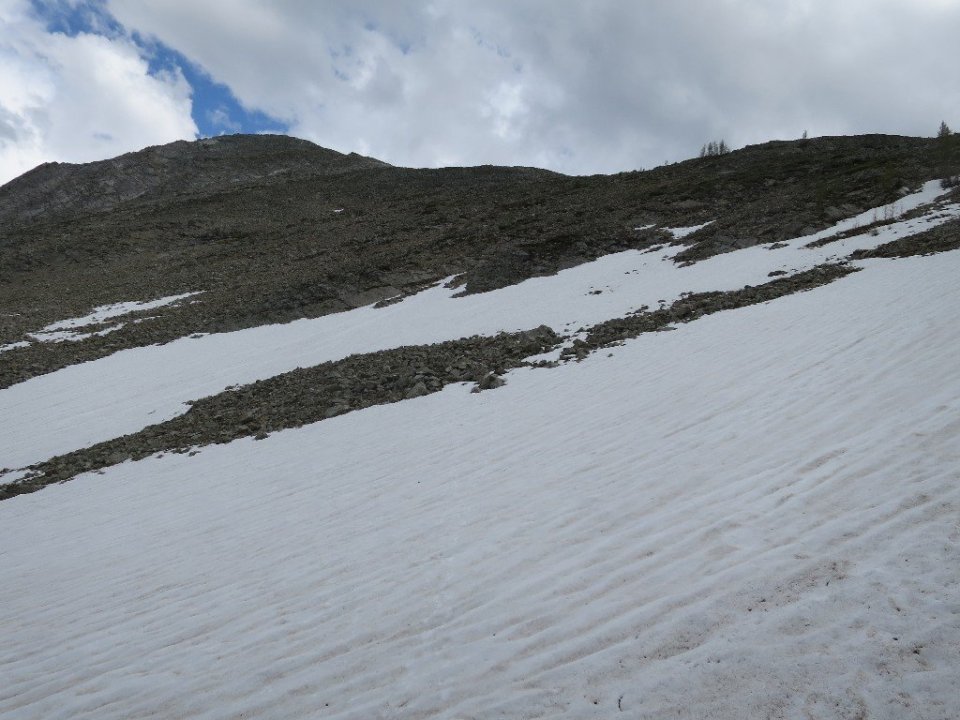 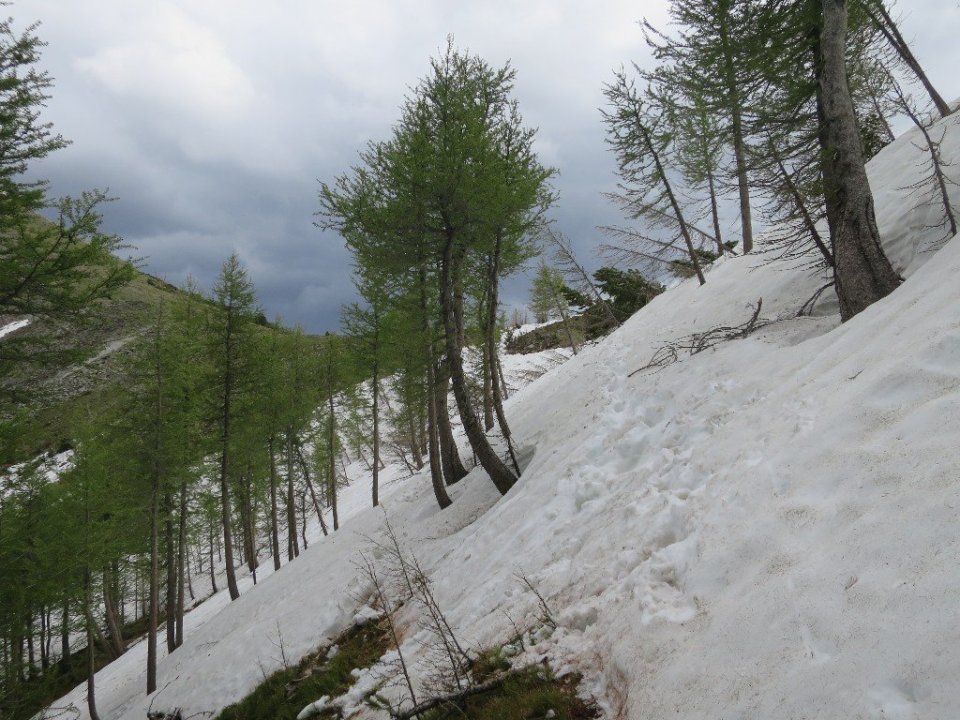 And sure enough we did have to cross the snow shute. It was steep and tricky but the snow offered reasonably good grip. We made it across without too many problems

By the time we reached Goat Flat, where we rejoined the CDT, the sky had darkened and rolling thunder could be heard in the distance. It was already raining and as we started to descend off the pass the rain increased and we were back in full wet weather gear. 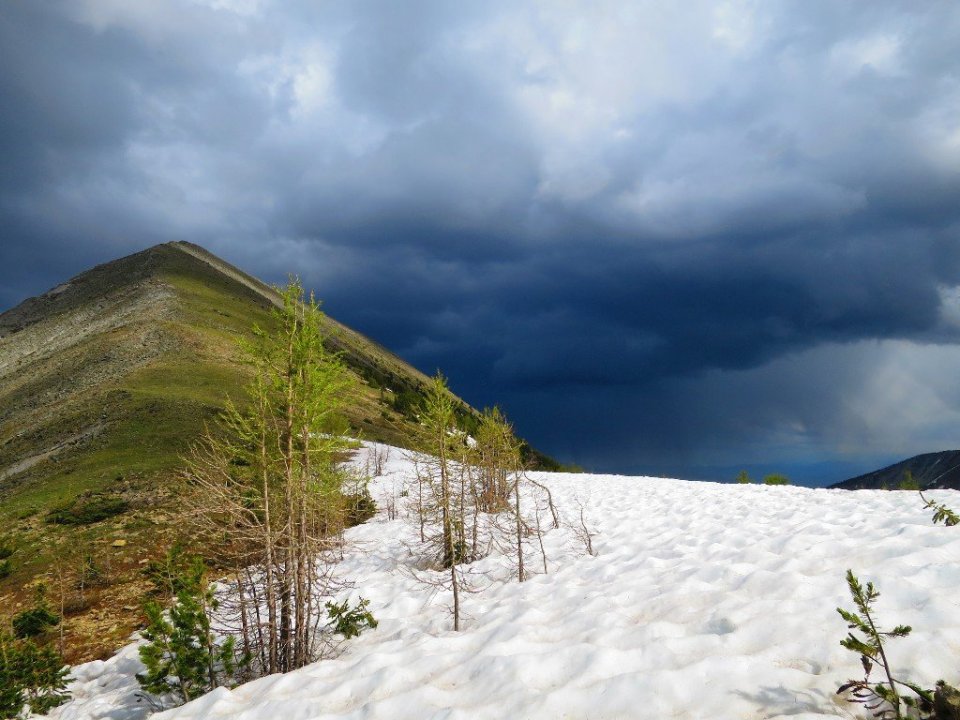 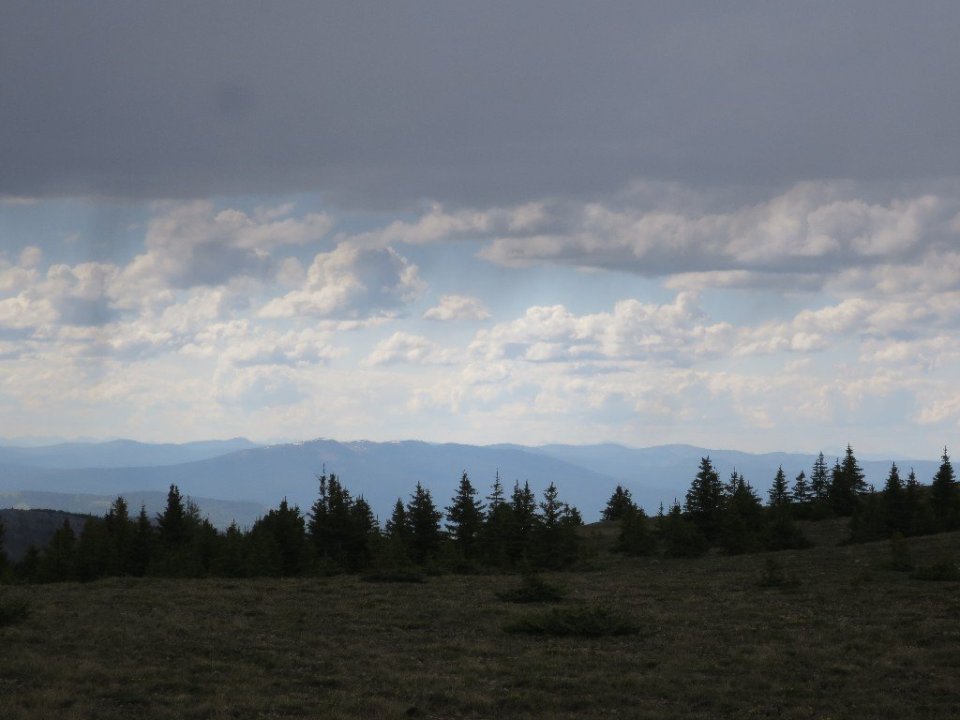 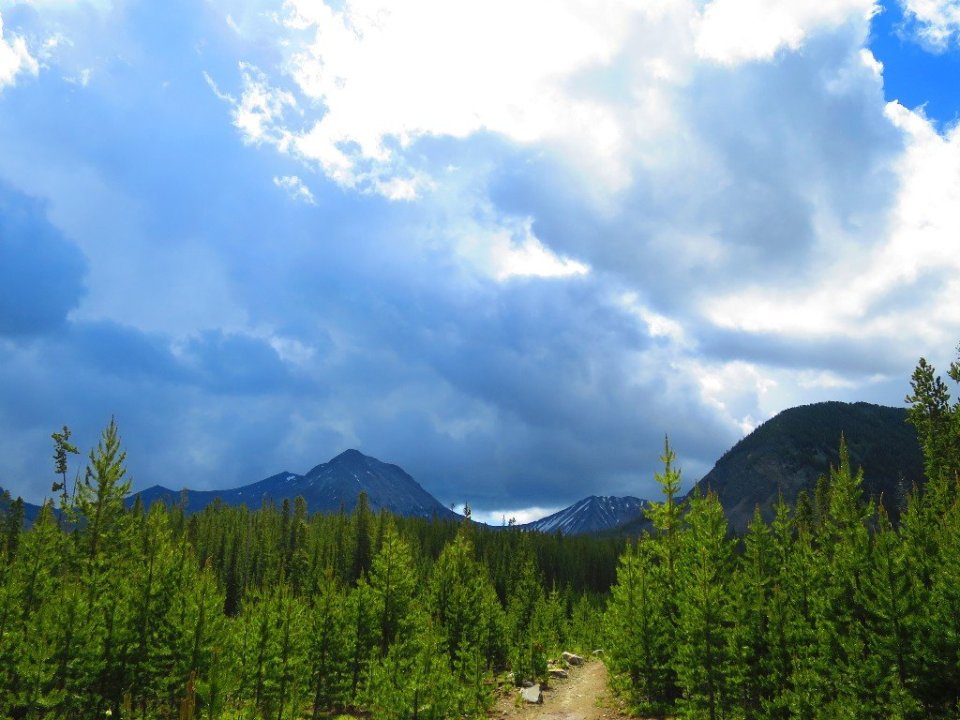 The trail on descent held quite a bit of snow but enough of the trail was exposed that navigation was not a problem. In the distance we could see blue sky ahead. It just wasn’t close enough to us. We stopped for the day by Page Lake. It was raining as we put the tent up. By the time we were settled the rain stopped and the sun came out. So changeable, so quickly. 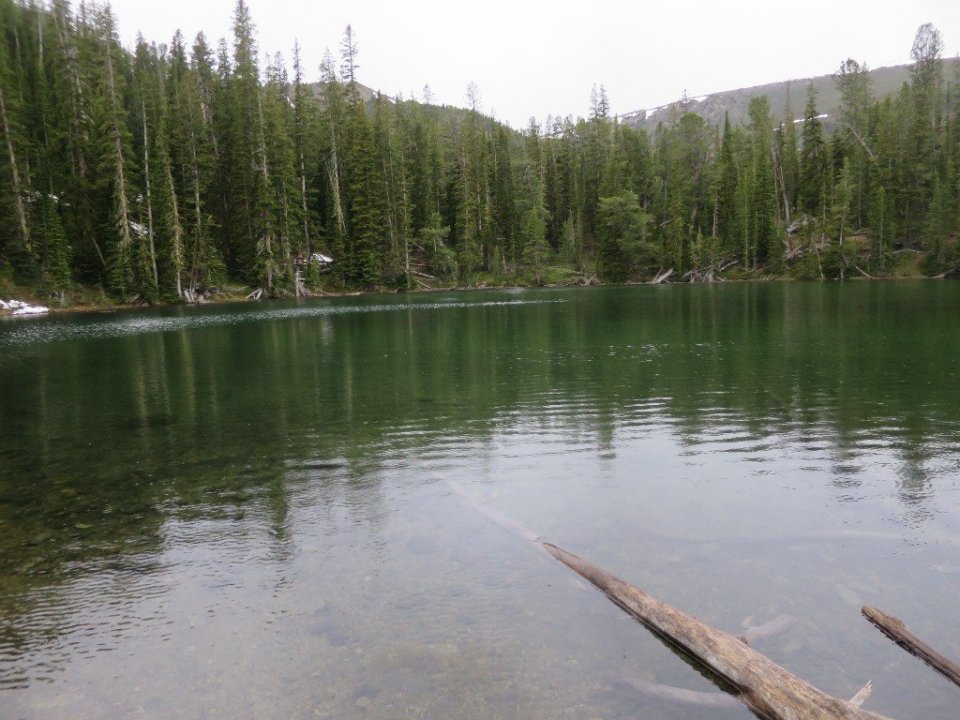 2 thoughts on “SOUTHBOUND INTO THE ANACONDA PINTLER WILDERNESS”