With trees around us come birds, their chirping was such a welcomed sound to wake up to. Frost covered the inside of the rainfly. The warmth of the setting sun on my skin last night was like a dream. Did it really happen? It was freezing cold through the night. A cool breeze kept the heat of the rising sun from reaching us.

But nothing like a couple of uphill miles to work up a sweat. In no time we were stripping layers of clothing off. At the top of the rise it was layers back on. In the distance the source of the cold wind became evident. To our north were snow covered jagged mountains.

The morning hiking continued through gentle rolling hills that were quite picturesque. Through much of the area it looks like the snow has just retreated. Were were undulating between 7500 to 8000 feet high points. The views from these peaks were quite something. We crossed numerous small creeks and all were flowing with lovely clean looking water. Spring flowers were just beginning to bloom. And in the higher parts of the trail the flowers carpeted the trail. It looked like a multicoloured tapestry. 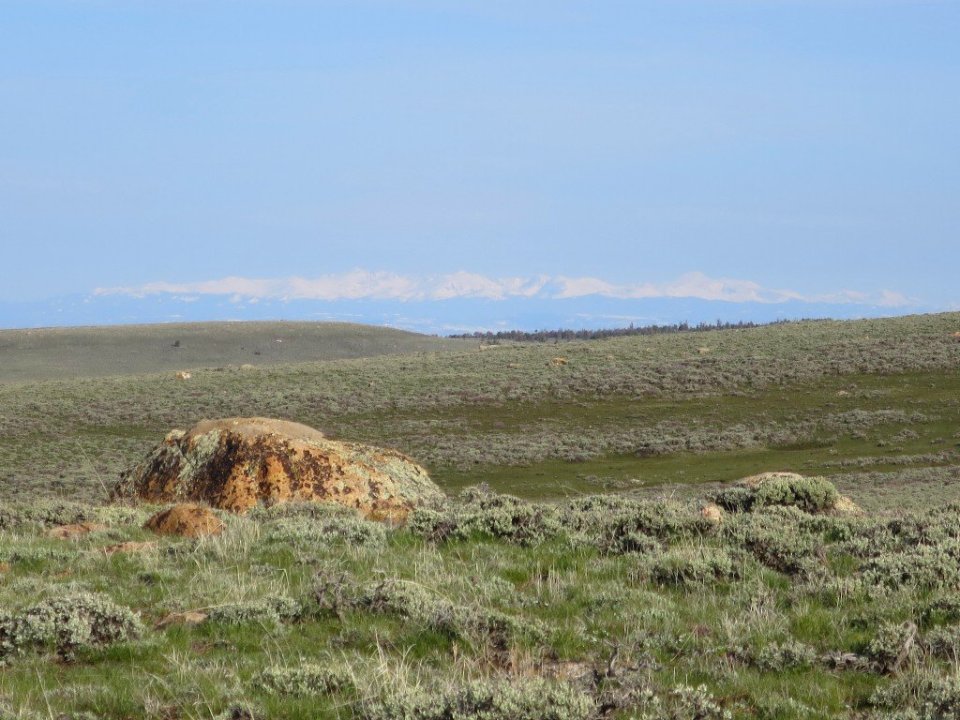 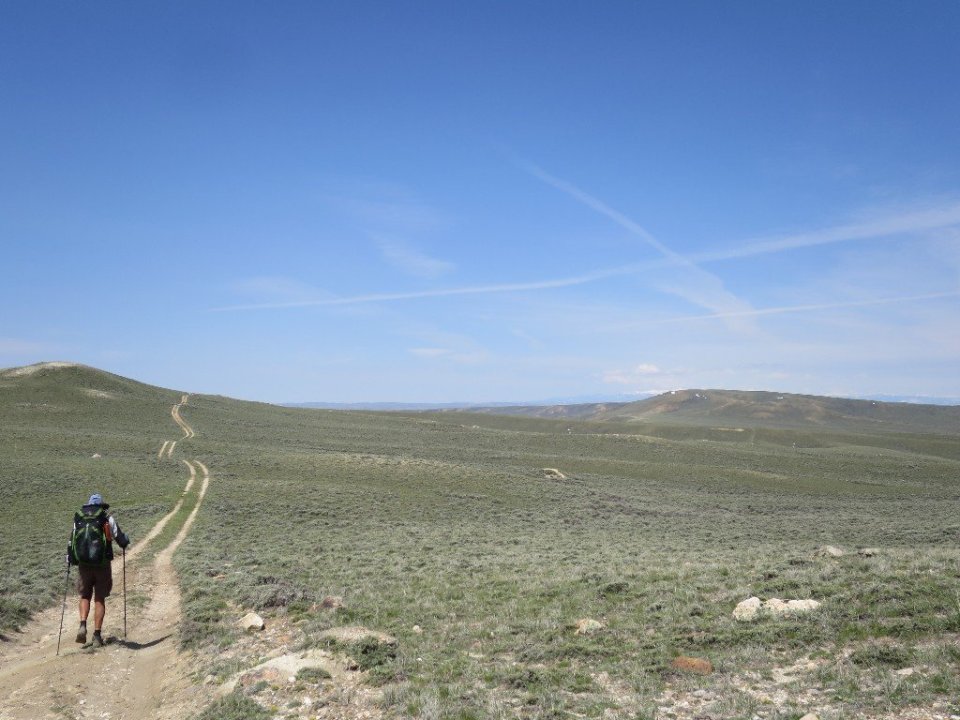 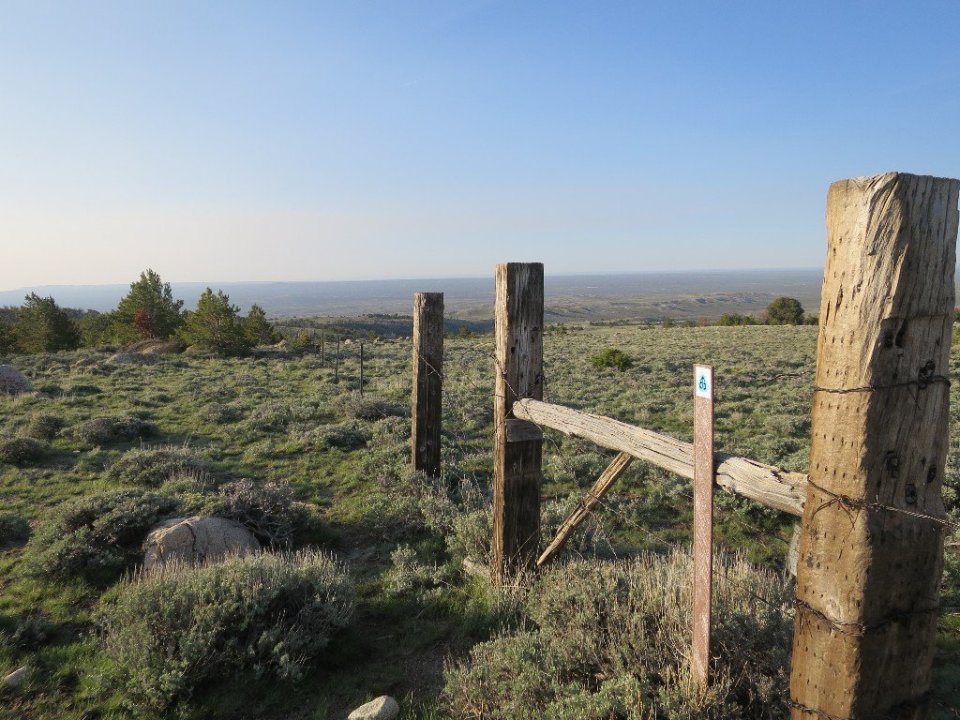 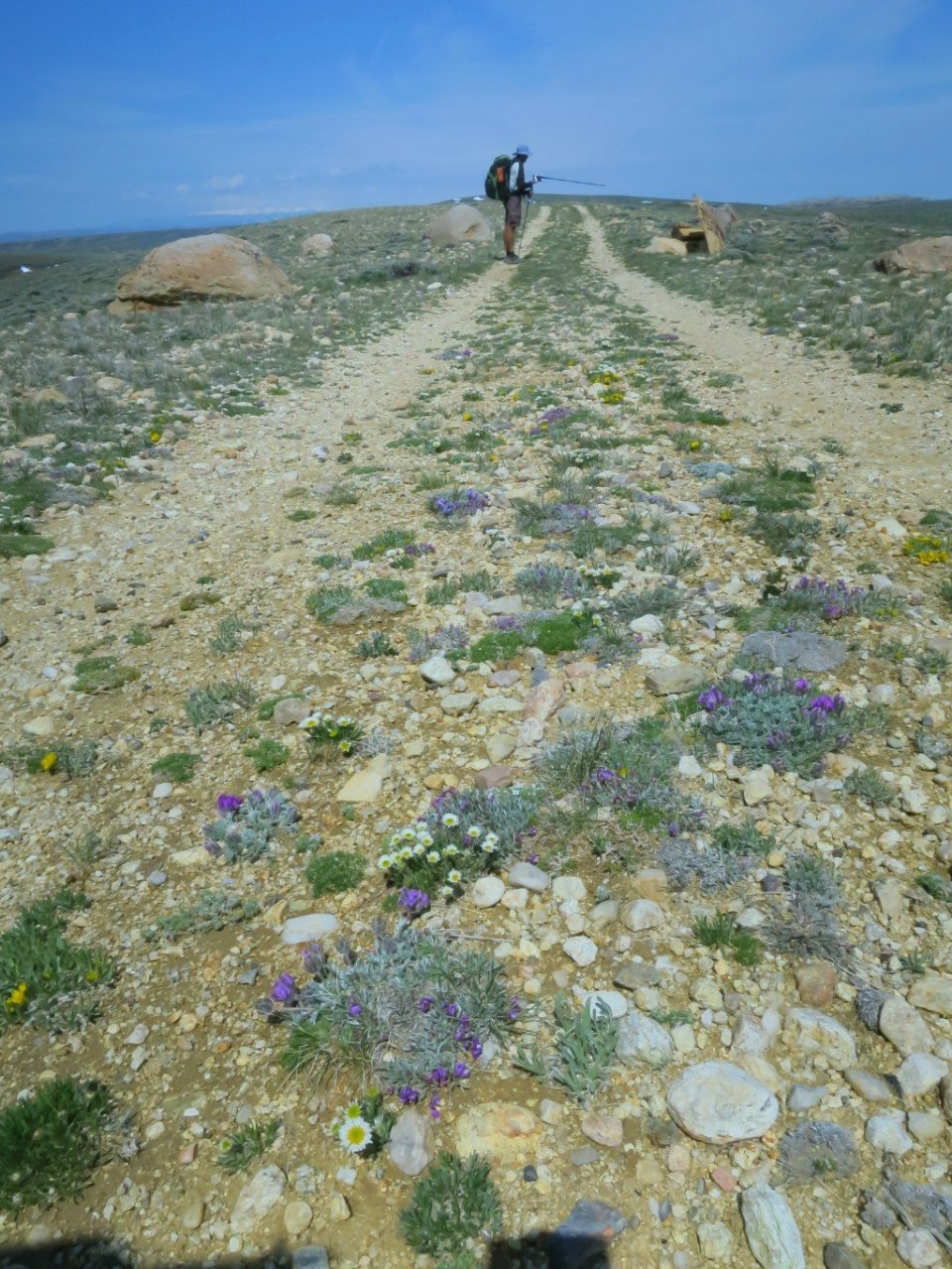 One of the advantages of being at a high point is the possibility of phone service. Hammer thought he saw a tower in the distance. And yippee…AT&T phone service in the middle of nowhere.

We were relieved to get news from home. Hammers Mum was out of intensive care and beginning her recovery. It was the best kind of news. 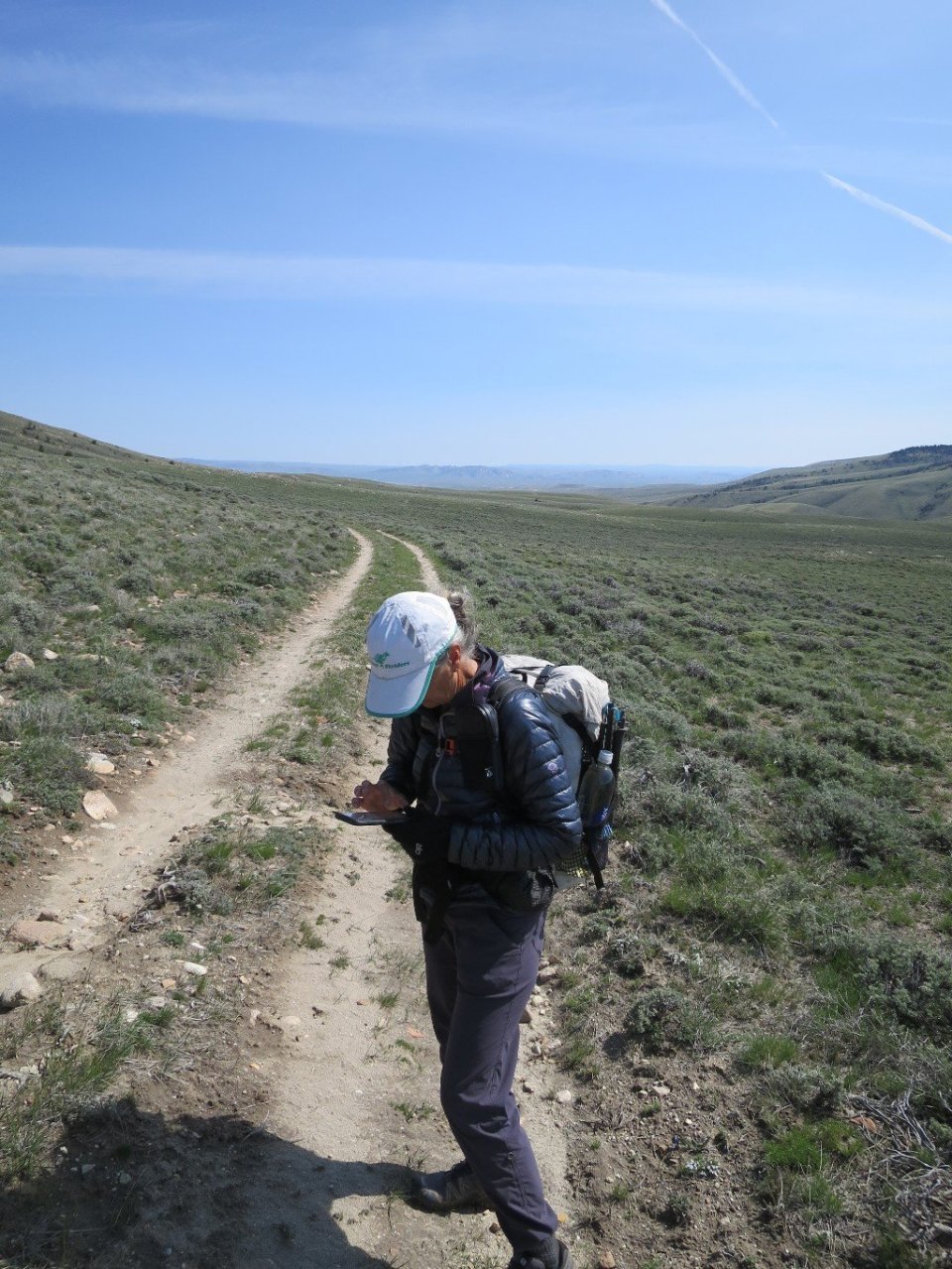 By lunchtime the wind had eased off and it was perfect hiking conditions. I stopped dreaming about being at a beach shack in Mexico instead of here. We were on a long rolling downhill section. The hills around were softened by erosion. They looked like there were poured. We crossed a few creeks which would have provided suitable water. But it was the water cache that had us excited. The Bureau of Land Management maintain a water cache just off the Bison Basin Rd. Lots of cold water and some sweets were contained in a steel boxes near a trail notice board kiosk. It was delightful to stop here and take a short break. It was nice to read the logbook and see who is on this section of trail. We were the 9th and 10th hiker to pass this point, this season. 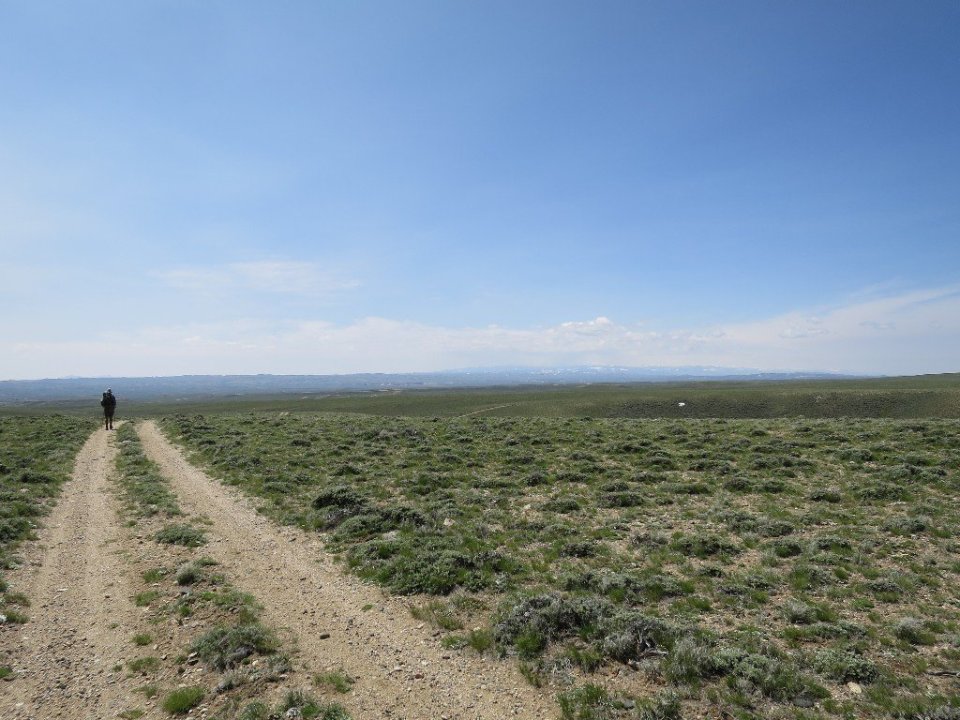 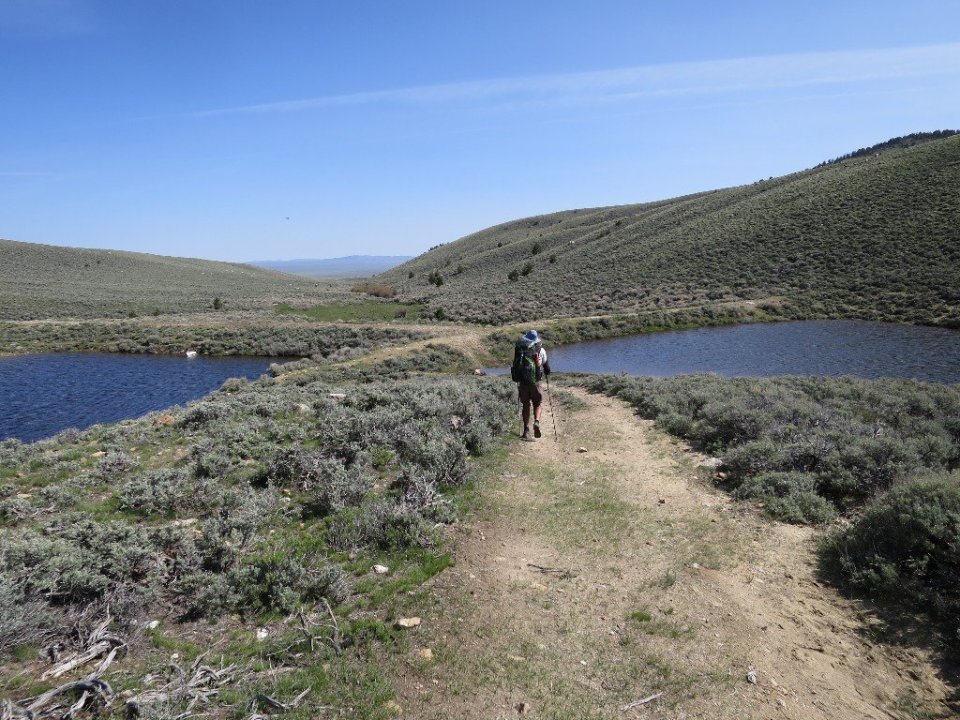 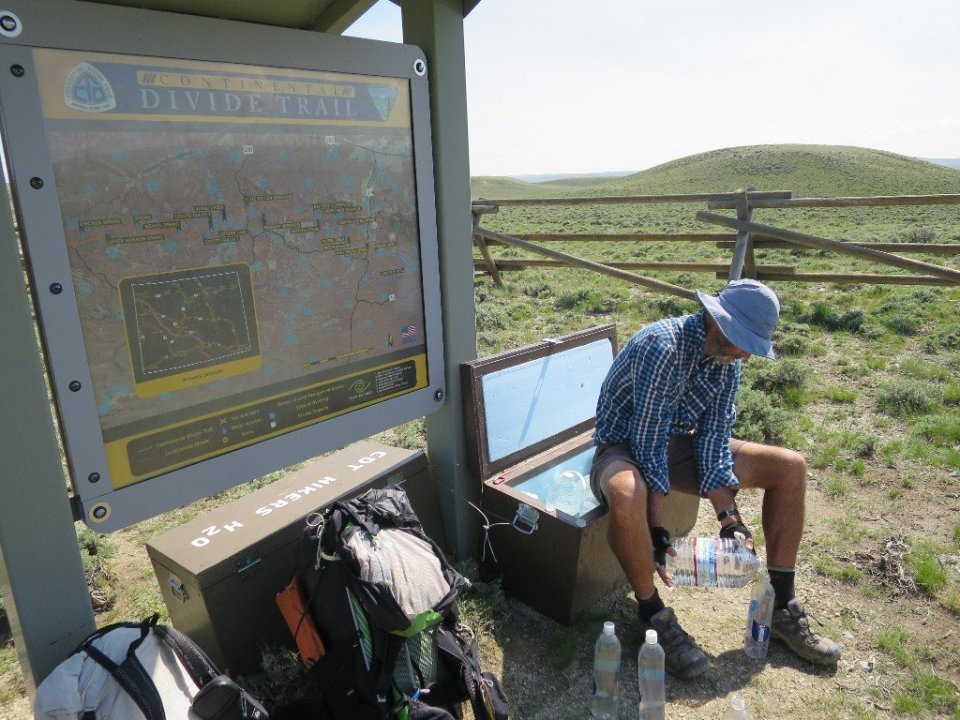 It was tempting to camp by the water cache but it was still too early to stop. The trail from there was quite exposed. Wild horses circled us for a bit bit. One was pawing the ground and snorting. Hammer assured me that they would not charge. We walked on calmly and they stood behind us watching. 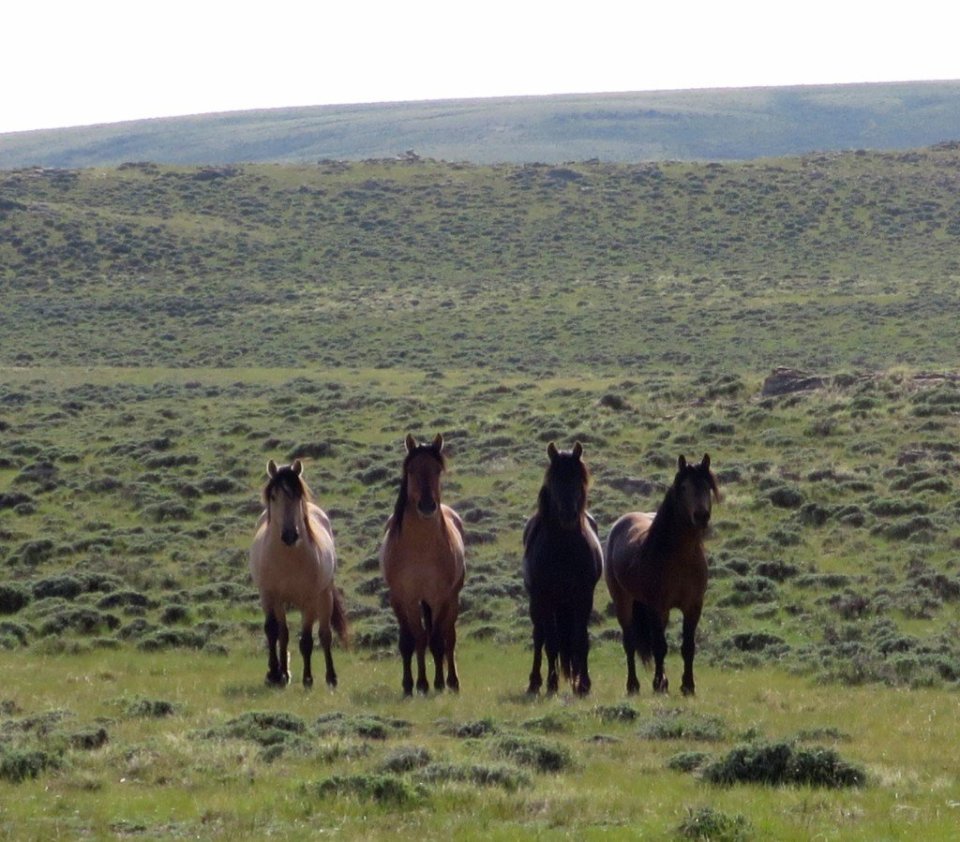 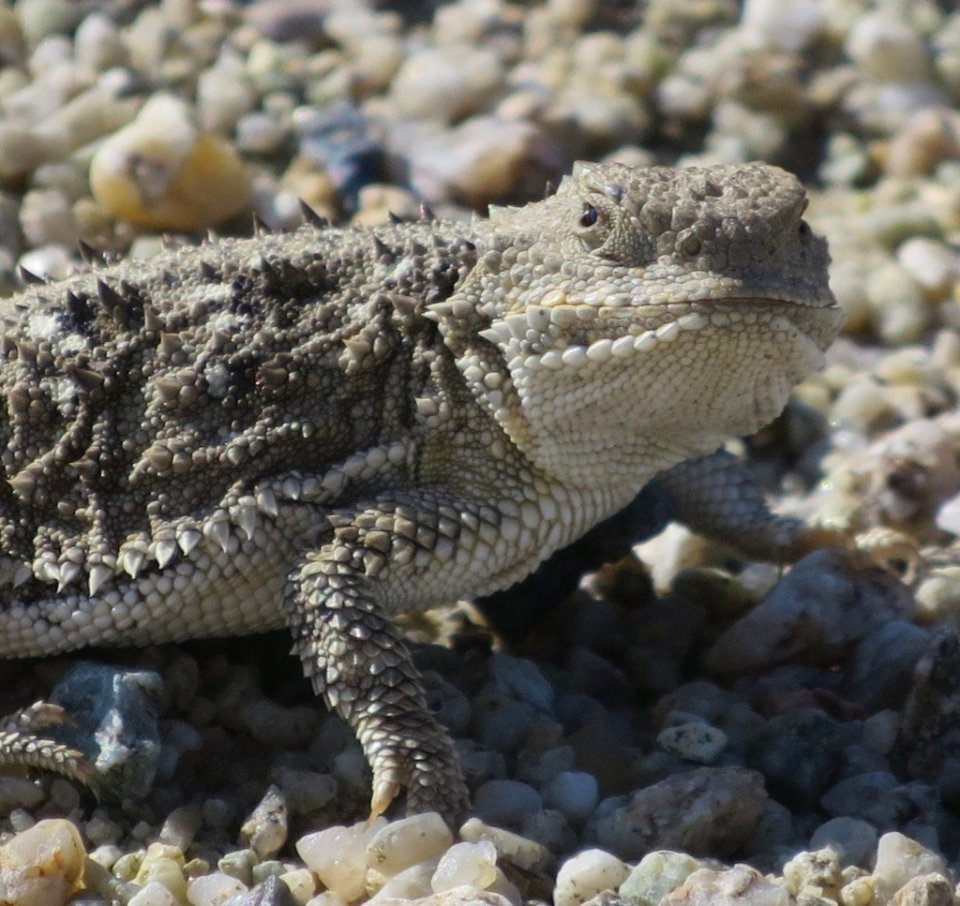 Twelve hours from leaving our treed campsite this morning we settled on a grassy spot above a creek for our campsite tonight. Happy that we were off the plateau and a little less exposed.

It was surprising to find that we had AT&T service even here. Hammer managed to speak to his Mum before going to sleep. We were so happy to hear that 4 days after open heart surgery she doing so well.

Sunset is streaming through the tent as I’m finishing this post. It turned into a perfect hiking weather kind of day.