It was a crispy blue sky day as we left Flagstaff, heading north towards Utah on Route 89. There is always a sense of excitement when heading out on the open road. And today did not disappoint. As we drove out of Flaggstaf the snowy mountain tops receded in the rear vision mirror and flat desert like landscape opened up.

The flatlands did not last long before the most incredible rocky buttes and distant snow covered peaks started to emerge. It was visually stunning and if Hammer had stopped each time I wanted to take a picture we would still be inching our way north. We did take a longer stop at a lookout with absolutely gobsmacking views of the desert valley fringed by the snow covered north rim of the Grand Canyon. Pictures cannot do the view justice. 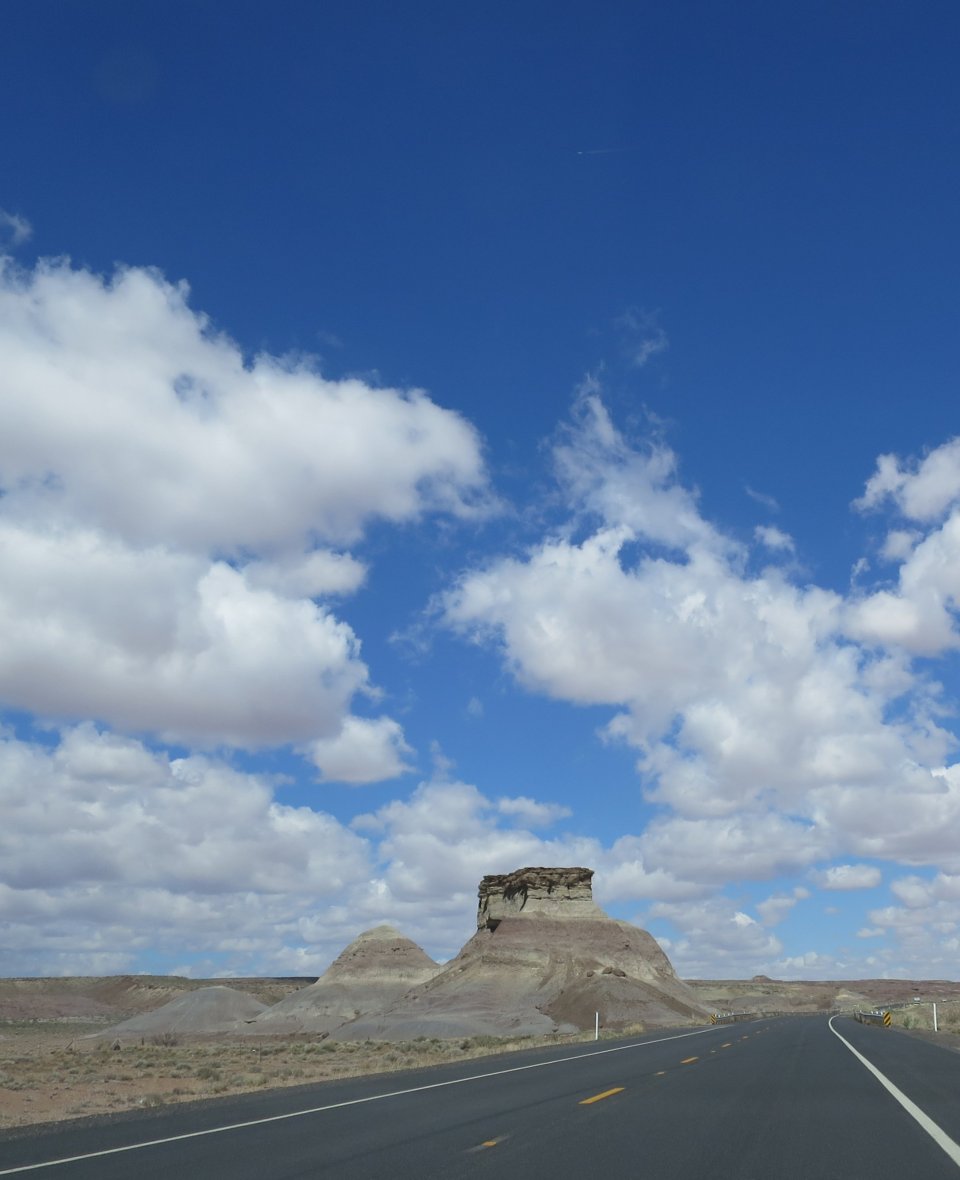 As we were passing Antelope Canyon we had thoughts of taking a tour but had not booked anything. The Canyon is on Navajo land and cannot be accessed without a native guide. In Page we tried to join a tour to visit Antelope Canyon but found the first available tour was on Tuesday next week. There are at least three companies running tours taking probably 500 + people through the canyons per day. While the canyons were probably always popular, Instagram has added to increasing interest. Page is a reasonably sized town located on the edges of Lake Powell, Americas second largest hydroelectric scheme.

With a visit to Antelope Canyon ruled out we drove north towards Bryce Canyon. On the way out we stopped to take a short hike out in the desert to see the Hanging Gardens. It was interesting to see a cliff overhang where groundwater seepage and shade has provided a perfect spot for ferns to grown. It was like a green carpet in a dry environment. Many of the low shrubs were beginning to bloom and as I dont mind a flower or two, I was in 7th heaven. 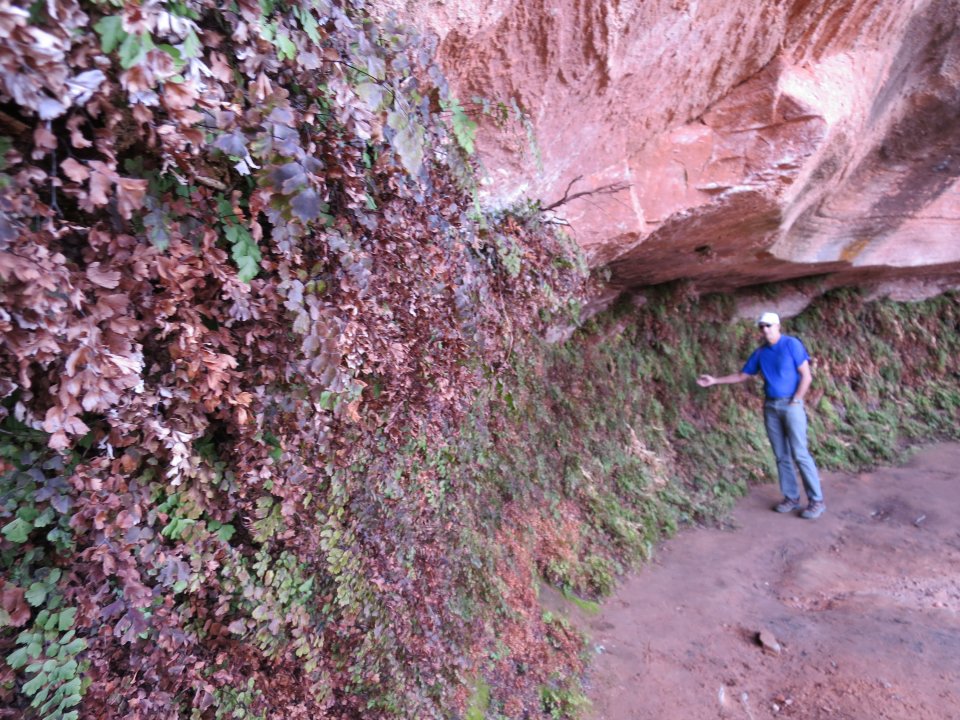 We had a short stop at the Powell Dam and marvelled at the engineering achievement. The day was slowly getting away from us and we continued west through Utah on Route 89, stopping at Kanab for the day.

What a treasure this town turned out to be. It was our wedding anniversary today and celebrated with a fantastic meal at a French restaurant – Vermillion 45. 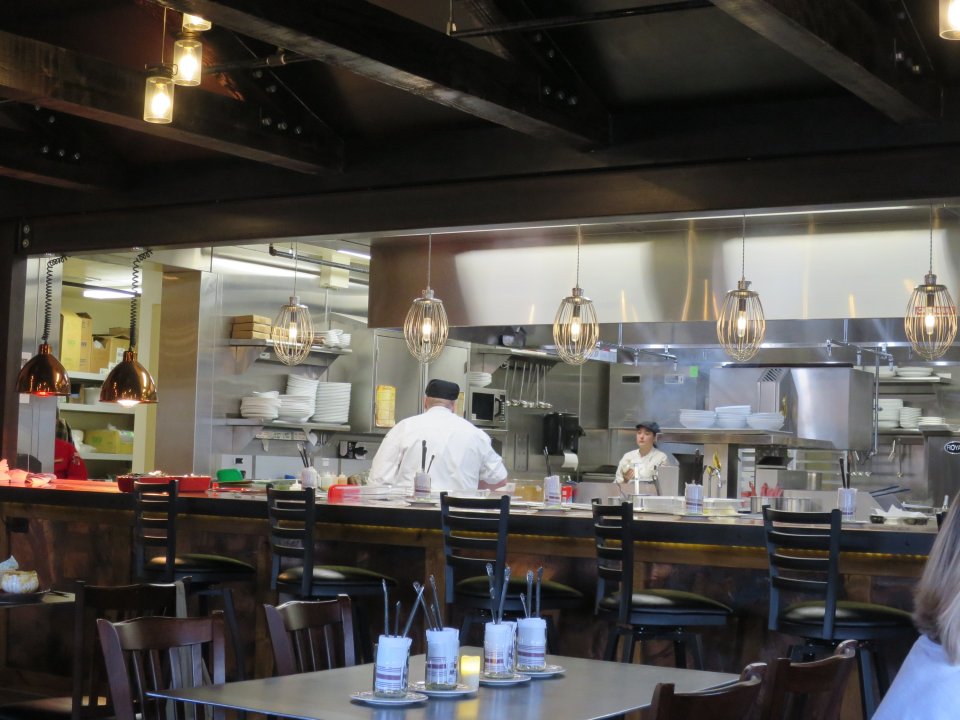 Before leaving Kanab the next morning, we stopped at Kanab Creek Bakery. And wow, what a delight this turned out to be. It was more of a French style patisserie then a bakery. The display was groaning with amazing looking pastries. And it had excellent coffee to boot. I was too distracted choosing what to have and forgot to take a picture. We’ll have to do it on our way back next week.

The drive towards Bryce Canyon was quite stunning and on the way we stopped at Red Canyon for a closer look at the hoodoos and impressive views out to the high plains. We did a short loop out on one of the trails to a formation named the Camel and sure enough it looked like a camel. We then joined the photographer trail which went around for a bit between some hoodoos and then went pretty vertical for a section and eventually died out. It gave spectacular views over the surrounding valley in the distance and amazing views of the hoodoos nearby, it was quite spectacular.

We then continued the drive towards Bryce Canyon and were fascinated to see that the road went through two rock arches which were made for the opening of the route to the canyons.

We arrived at Bryce Canyon National Park before midday and spent the rest of the day hiking and driving the sections of the park that were open. There was so much snow cover that only sections of the rim trail were open.

Our first stop was Sunset Point, in the middle of the Bryce Canyon amphitheatre and it was mindblowingly spectacular.

It is a huge section of the canyon filled with hoodoos many of which were snow covered and the uncovered ones were a multitude of reds, yellows and whites. We walked along the rim trail towards Inspiration Point and everywhere you look was absolutely stunning. The last section of the trail to Inspiration Point was under several feet of snow and closed. 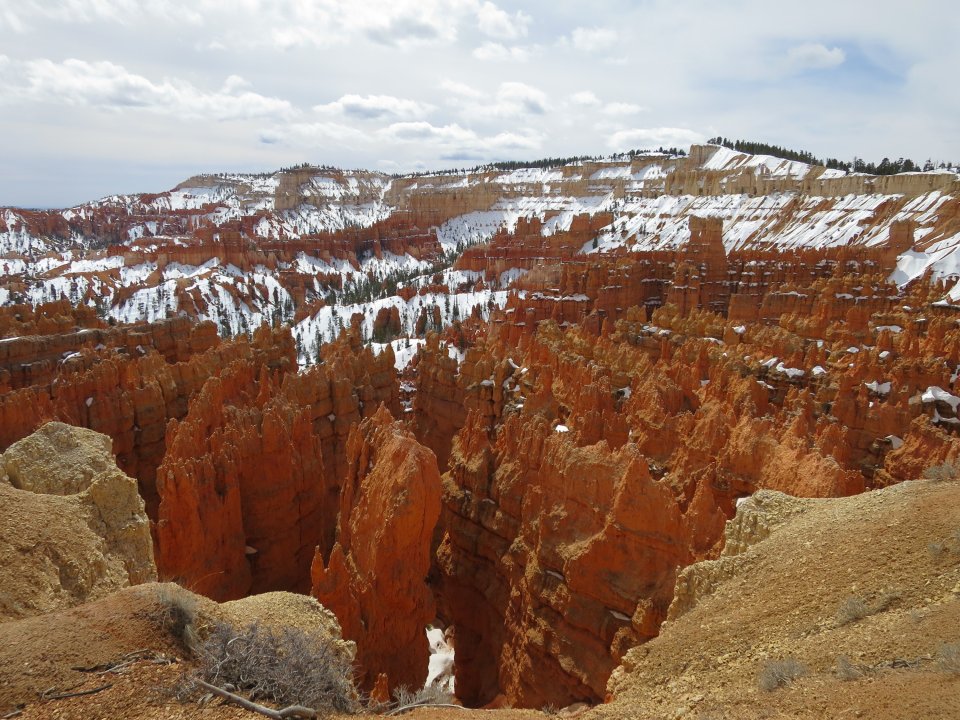 We then walked south toward Sunset Point which had less snow on the trail but much more mud which at times felt like it would swallow your shoes. The hoodoos were less spectacular on this side but still impressive. As it is so early in the season, the only trail into the canyon that was open was the Fairyland Loop, which couldn’t be hiked as a loop as the Fairyland Lookout was still closed. We thought we’d hike into the canyon tomorrow.

Late afternoon we drove south through the park as far as the Natural Bridge lookout. The road was closed beyond this point and the surrounding landscape was covered with deep snow. I was trying not to think about what hiking through this white wonderland would be like. I guess we’ll find out soon enough.

Visiting Bryce Canyon was a visual feast beyond expectations. Photographs cannot do it justice. We were saturated with spectacular views and we’d only seen the canyon from the rim. On the way out of the park for the day we stopped at the Visitors Centre to learn a little of the geological history of the area.

On Friday we hiked the Fairyland Trail which was only trail open that takes you down into the canyon. It was an overcast and much cooler day today with temperatures dropping to below freezing overnight. The trail was muddy and covered in lots of snow at the start but dried out as we dropped into the canyon. As soon as we left the rim, it was so very quiet. And as we descended the towering hoodoos added to a cathedral like atmosphere. The hoodoos reminded me of spires of the Sagrada de Familia cathedral in Barcelona.

Such towering majesty. We dropped all the way to the bottom of the canyon which in this section was still at over 7,200 feet in elevation. 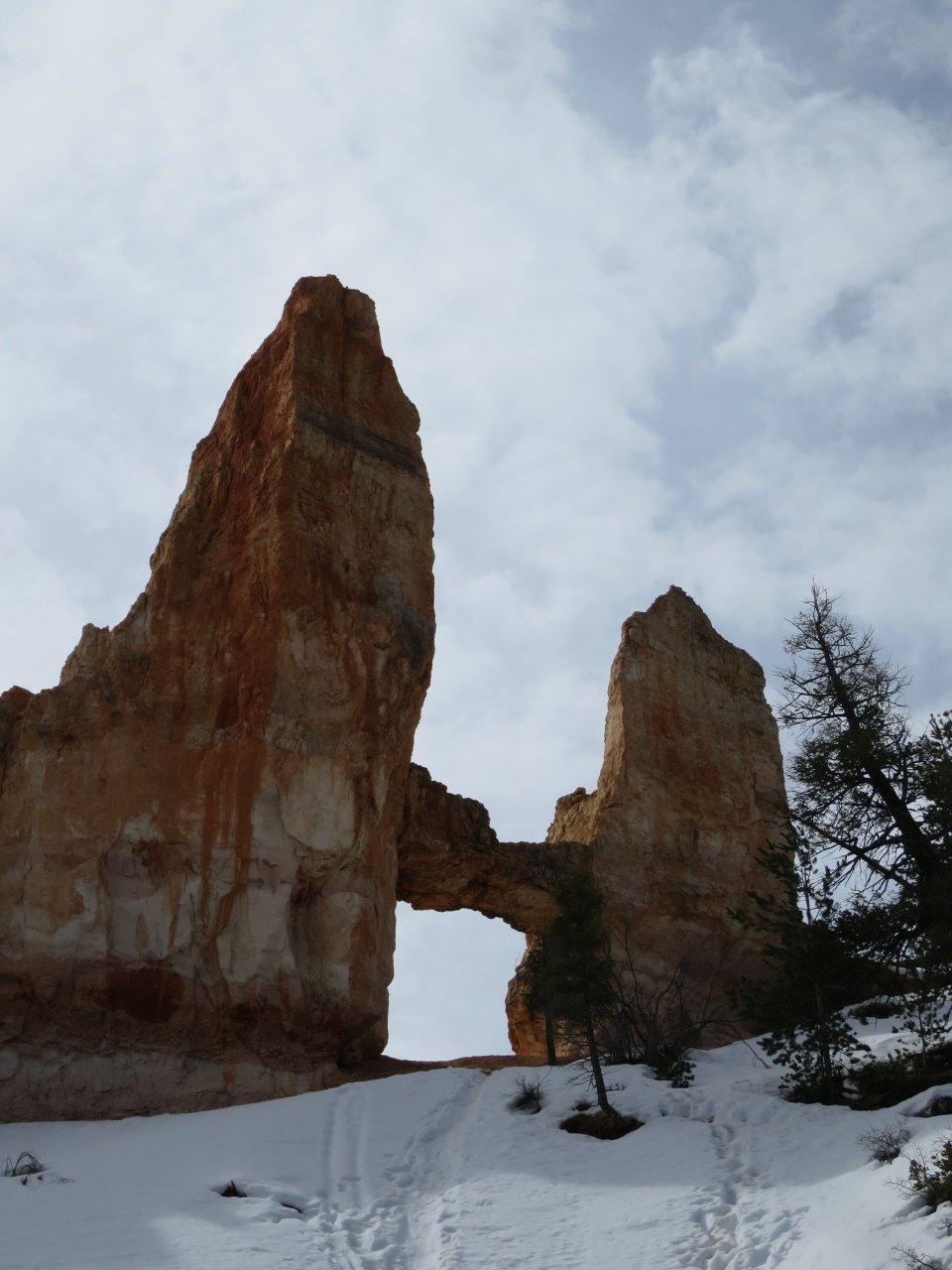 After stopping at the bottom to view the Tower Bridge we hiked on the Fairyland trail for another hour before turning around. I must have taken hundreds of pictures as the visual wonder just kept evolving. At times it was difficult to know where to look…just like Fairyland. What an amazing natural wonder. And to think its named after a serial homesteader Ebenezer Bryce. He was a Mormon pioneer who moved here in the late 1870s and established numerous settlements, and built churches as he moved around. His view of the canyon amphitheatre was a little underwhelmed, he thought it was a hell of a place to lose a cow.

The hike back out to the rim was a little bit more muddier as the warmth of the midday melted the snow. We had seen as much of the park as was open this early in the season. So by early afternoon we headed back south towards Zion National Park, which we will be visiting tomorrow.