DISPATCH FROM THE TRAIL

I slept in a little later than usual this morning but still managed to get on trail by 6.30 am. Looking South there were a number of cinder cone mountains and views of the peaks known as The Three Sisters and also the HooDoo ski lifts. A geological structure known as Three Finger Jacks then came into view.
I had a close encounter with a mule deer who seemed quite happy to pose for pictures. 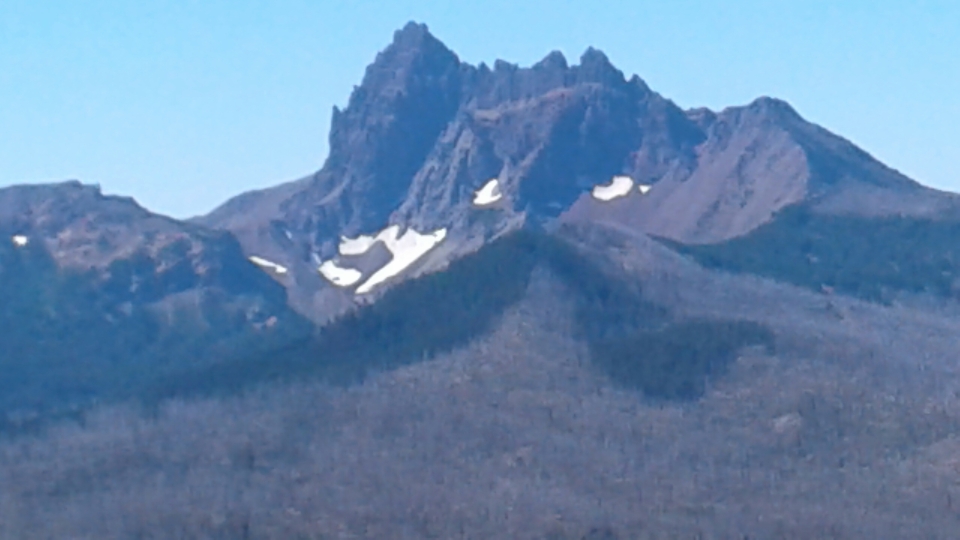 Lunch was by Rockpile Lake. Hiking on shortly after lunch I saw a couple hiking south bound. Suddenly there was this shout of – Hammer. It was Bill and Barbara from Portland, who have been following the blog from the beginning and had kindly offered help if we needed anything from REI or a place to stay etc. Barbara said Bill had met many famous people but he was really looking forward to meeting Hammer and Corky.  Such a shame, Corky was not there to meet Bill and Barbara as she would have loved it. I  filled them in, that Corky was on a plane home for some ankle surgery but that she will be returning all going well, for some car touring, so hopefully we can catch up with Bill and Barbara when in Portland. They are presently section hiking from Mount Hood to Highway 242. They are planning to do the desert section next April. While the scenery is stunning, it made my day to meet Bill and Barbara.

In the afternoon it was then back into the forest which was nice as the last three trail days have been dominated by a burn from 15 years ago.

The other interesting part to the late afternoon was crossing Russell Creek which was challenging. It would have been at home with some of the hairy creek crossings coming out of Yosemite. Not far from Russell Creek, I camped with 3 other hikers.

There is predicted to be a lot of meteor showers tonight but with tree cover we are unlikely to see any of it. The meteor showers continue tomorrow so hopefully I can get a clearer view of the night sky. 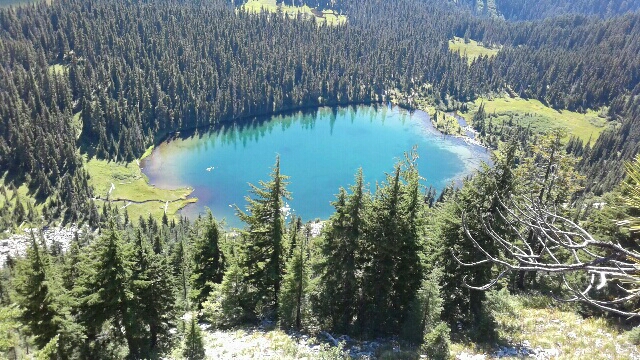 CORKY – OFF THE PCT

Today is technically a lost day for me as the flight from Vancouver to Sydney crosses the time zone.

The flight from Portland to Vancouver was uneventful. Although I did find the stream of people rushing through the airport terminal very overwhelming. I felt so disconnected from this hustle. I was already yearning for the serene views I had from Black Butte and the peace and quite of the ‘natural life’ on trail.

Once in Vancouver I checked into my forwarding flight and had the fortune to meet a lovely Air Canada ground staff member. She could not upgrade my seat, as First and Business were full, but she arranged for me to have  2 vacant seats alongside me. So no need to worry about keeping my leg horizontal for 15+ hours of flight time. She then shared her story of 7 ankle surgeries to fix a fractured ankle under circumstances similar to mine. Although her fracture sounded a lot more extensive, two years down the track,  she has just had her last operation to remove some hardware. And then she showed me her ankle still in a support brace. She had her accident in Germany where she also underwent the initial surgery. Incredible and strange coincidence wouldn’t you think?  Then it got stranger.

I was going through the Canadian Customs security screening after checking in and a female Customs Officer called me over. I was concerned that I may have done something wrong….far from it, she wanted to give me advice about my ankle.  She showed me her ankle scar where she had a metal plate put in to fix a fracture – very similar to what I think I will be having done. She said to make sure that I have the plate removed after the bones are healed. This was so surreal….the line behind me was growing – waiting to go through customs screening. Such serendipity. Now I really did think I was dreaming and would wake up in the Big Agnes tent alongside Hammer, to the sound of birdsong and the exquisite beauty of the first light of dawn just breaking through – excited for a new day of adventure on the PCT.