Running Above the Clouds

Eight weeks of preparation and race day finally arrived. The week before the race I did not run at all as Sydney has been experiencing a torrential downpour almost everyday.  I know the excuse is a bit soft but I also convinced myself that no running will give me ‘fresh legs’ come race day. I arrived in Dunedin on Thursday afternoon and drove the 360km west towards Te Anau, the gateway to New Zealands Fiordland National Park. A gorgeous drive through lush, green farms populated by sheep mainly and some cattle in places. Few cars on the road and it was bliss to drive along the small country road in the late afternoon sun with the green surrounds gliding by. Arrived in Te Anau late evening but the sun was still high on the horizon. It is a lovely small town by the lake with towering mountains to the west.  On Friday I walked the first 6km of the Kepler track on the flats to Brod Bay. The first thing that struck me was the smell of the forest, a cool and clean spruce forest smell. And the second thing was the quite of the forest, you could almost hear yourself breathe. The track in this section is superb, about a metre wide with a spongy layer of leaf litter creating a relatively even surface underfoot. Perfect trail running surface. I attended the compulsory gear check and the race briefing on Friday evening and seeing a room full of eager runners made me feel a little anxious about what race day would bring.

The weather prediction was for a warm day but we still had to carry 2 thermal tops, thermal long johns, a waterproof and seam-sealed jacket and pants and a space blanket. All the gear weighed over a 1kg and with water and gels added, the pack was close to 3kg. This weight, on top of my bloated carbo-loaded body, I felt like a blimp about to waddle off to the forest when the countdown started for the 23rd running of this race. Kepler Challenge is 60km  and in planning for this run, it helped me mentally to break the race down into 4 stages: Stage1 to Luxmore Hut-14km; Stage 2 to Iris Burn-14km; Stage 3 to Motorau-16km; and Stage 4 to the Finish-16km. 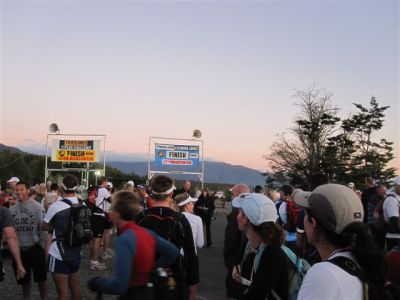 Stage 1-14km: The first 6km on the flat sorted the field out before the climb to Luxmore started. I got the start of the climb in 38 minutes, a little slower than planned but no bad considering that 400 runners were being squeezed onto a track less than 1m wide. Next was the ascent to Luxmore Hut climbing 1400m over 8km and it was not too long before the sweat started to break out.
We were in tree cover for quite some time with tempting glimpses up ahead of a clearing above the trees but it seemed like it took an eternity to get there. Finally we broke through and left the trees below us and started to ascend further above the the clouds, which could be seen hanging below us over the valley.  No matter how much I studied the race profile on a map nothing prepared me for how great it felt to break through the treeline and see the clouds below me on the way to the first checkpoint at Luxmore Hut. I was so emotional I almost cried while the compulsory gear check was being carried out at this checkpoint.  A truly magic sight when you want to slow time down so that you could fully take in the moment. I said this to the person running in front of me and she said wait, it gets even better. I reached Luxmore Hut in a total time of 1:45. I panicked a little as I had planned to take about 2hours worried that there is still 46km to go and I may hit the wall before reaching the end.

Stage 2-14km: The next section of the trail follows the open ridge line with two descents and two climbs before reentering the forest for the steep drop down to Iris Burn Hut. A cold crosswind made for a speedy traverse of the exposed ridgeline while we were buzzed by a few helicopters. I found out later that quite a few non-running partners hire helicopter rides to take them over the ridge at the time their runner is likely to be traversing this section, as away of sharing in the experience. The trail along the ridge was quite narrow and seemed to cling to the edge of the mountain. As much as I did not want to leave the mountain top I did want to get out of the wind and get warmer.  And soon after the Hanging Valley shelter checkpoint the steep descent down the mountain started with hundreds of stairs spread out over the steeper sections. Once into the treeline we started the zig-zaging descent and then the sharper tight switch backs. I knew to be careful on the descents but the switchbacks were harder than I thought requiring you to to break and turn at the same time which put quite a strain on the quads and as I found out later, on the ITB. I was still running comfortably as we entered the Iris Burn Hut checkpoint. The 14km section from Luxmore to Iris Burn took me 2hrs 15min for a total time of 4hours at half way and feeling good. I had heard a runner behind me earlier say that the second half of the course is pretty boring but nothing could be further from the truth. The second half of the course traverses beautiful green rainforest with a trail designed for runners. Despite the course profile the second half of the course is not flat. It undulates up and down over creeks as it winds its way along the valley. 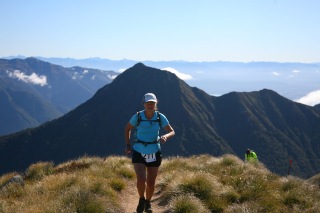 Stage 3-16km: From Iris Burn to the next checkpoint at Motorau Hut, a distance of about 16km took me 1hr50min, I think. I ran all the way but it was a difficult section for a number of reasons. Firstly it was hot even though we were running under the tree canopy and secondly it was tough mentally as it was the first time along the whole course that you could break into a running rhythm. But, the legs were not so fresh after the brutal climb and the punishing descent off the mountains. I kept telling myself that “all things come to an end, look up and enjoy the scenery”. And the scenery was great while not gobsmacking like the mountain tops and being above the clouds, just lush and green and quite. That was enough to distract me from the numerous niggles that my brain started to register. A sure sign that I was tiring. The small group I was running with got strung out and I ran the last 7km into the checkpoint on my own. It was first time since the race started that there were no runners in sight. I did have a few nervous moments wondering if I tuned out and missed a turnoff. I knew this was not likely considering that there is only one trail. But I guess the brain needed to be kept occupied with something while the body is busy doing something else. I was very relieved to get to Motorau Hut Checkpoint and I got a mental boost knowing that 3/4 of the distance was behind me and I was on the last leg, only 16km to the end.
Stage 4-16km: This section of the trail can be easily accessed off road and spectators started to appear along the course. It was great to get support along the way especially at Rainbow Beach water station, 10km from the end where a large crowd had gathered, lots of kids high-fiving. Great festive atmosphere, a bit like reaching the deviation on the Six Foot Track Marathon. With 10km to go I was still running at around 7-8min/km pace and thought that under 8 hour finish was possible. But as I calculated my rate of progress to the next water stop 5km away I realised that a more realistic result was going to be over 8hours. My legs were tightening especially around the ITB which I had not experienced before and mindful of my goals for the race: to enjoy the scenery and not get injured, I started to take more and more frequent walk breaks to stretch the legs. So the last 10km were a slow trot interspersed with walking. I could hear the announcer 2km from the finish but it took ages to reach the turn over the control gates weir and see the finish chute. I almost burst into tears for the second time today as I turned to the corner, crossing the finish line in 8hours 5minutes, a 155th out of 410 finishers and 30th female. Pretty pleased with that result on a total of 8 weeks of training. My longest run in training was one 28km road run and two 20km trail runs. 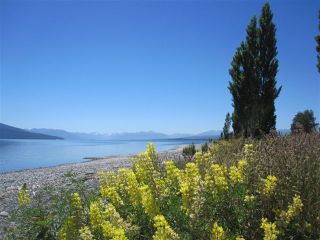 After the event: Temperature at the finish was in the low 30 degrees C. I sat in the cold water of the lake with other finishers discussing how their day unfolded and plans for future events. Apart from sore toes, nothing else hurt. The cold water felt wonderful.  Like any event there are many lessons learnt. I realised my bubbling emotions on breaking above the clouds near Luxmore Hut were related to my last visit to New Zealand 23years ago following the death of my father. I recalled long melancholy walks in the mountains around Lake Taupo feeling like you could just walk through the clouds and straight to heaven. I guess today I experienced a little bit of that same heavenly feeling out above the clouds on the mountain tops. This time I was not sad for the losses in my life but grateful to be healthy and alive and for the privilege to experience such a stunning landscape. Each time I run in fantastic places like this, it is a celebration of being alive and well.

Another lesson learnt is that sometimes less is OK. While a few more long runs in training might have conditioned me to last the distance. I always run the risk of breaking down if I run too much. So for me it is always a fine line between training just enough to be confident that I can take on the challenge or doing just one more long run too many and finding I break down. Here I had no choice, as time was limited.  In addition to few more and longer runs if I had more time to prepare, things I would do differently to prepare for this run – should I ever come back – would be be to do a lot more downhill running in training. There a lot of switchbacks on this course.  One of the hardest things about this event is actually getting into it. The 400 places were taken in less than 10 minutes, with a wait list of over 200. Now I need a strategy on how to get in again, perhaps next year? 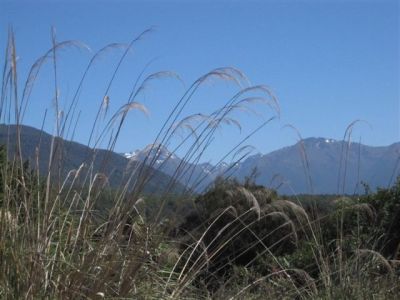